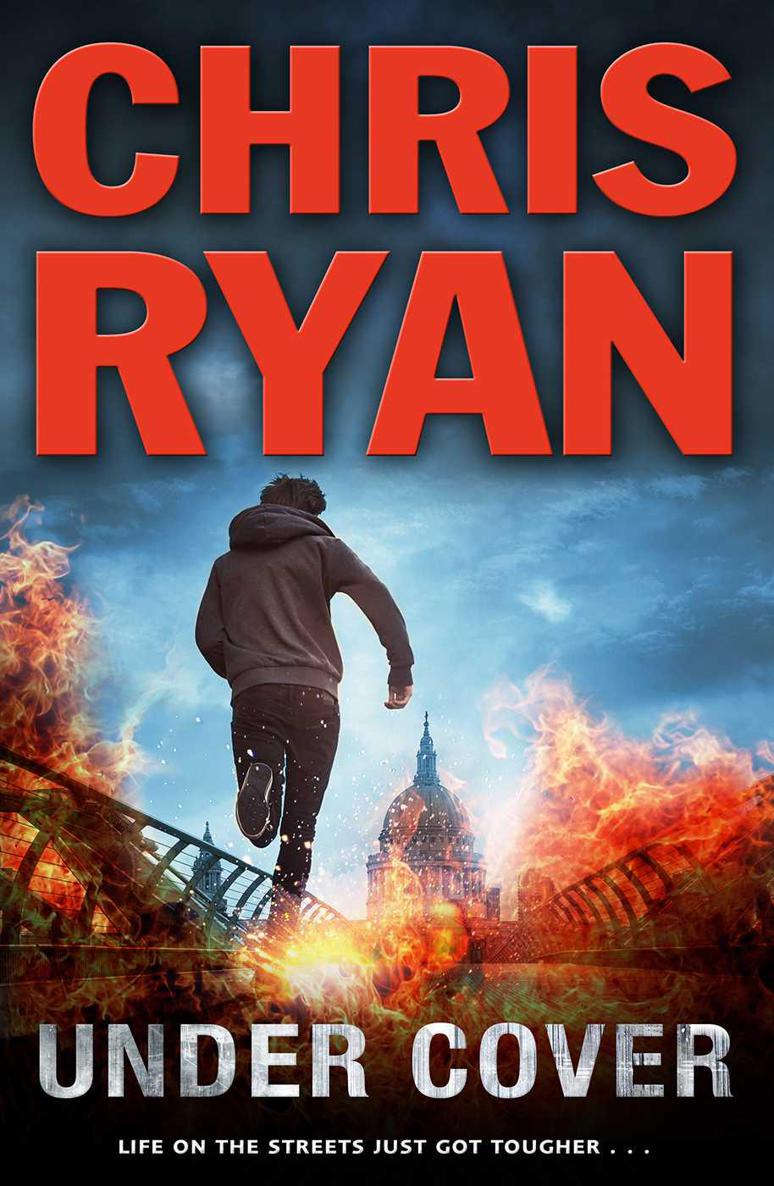 Published by the Random House Group for adult readers:

NON-FICTION
The One That Got Away
Chris Ryan’s SAS Fitness Book
Chris Ryan’s Ultimate Survival Guide
Fight to Win: Deadly Skills of the Elite Forces

23 Something Good and Clever

Ricky has lived on the streets for a while now. Life is tough, but he’s sharp and quick, and he gets by.

Until he steals from the wrong people . . .

Luckily for him he is rescued by a stranger who makes him an offer he can’t refuse: a flat and money in exchange for learning certain skills – surveillance techniques and hand-to-hand combat.

But what is this all for?

‘Gripping from the off’

‘Fast-paced action thriller
that hits all the right spots’

‘Chris Ryan proves, once again,
that he is a master of suspense’

Two on the north side, three on the south.

Are they going to be a problem?

I hope not. We’ll keep an eye on them. If they look like causing trouble, we’ll move somewhere else.

But Ricky Mahoney didn’t want to move anywhere else. This was the best place in London for what he had in mind.

Ricky wasn’t like other fourteen-year-old kids. It wasn’t just the scruffy clothes or the second-hand trainers with the holes in them that made him different. It wasn’t just that he had spent the past year and a half living by himself, with no adults, in a sordid room in an overcrowded, falling-down old Victorian house in north-east London. It wasn’t just that, by his own admission, he was a sneak, a pickpocket and a thief.

It was his habit of talking to himself that made Ricky think he was
really
weird. All day he discussed things in his head with an imaginary accomplice called Ziggy. Totally crazy, but Ricky didn’t care. Because when you don’t have any real friends, sometimes imaginary ones will do just as well.

Ziggy was an argumentative so-and-so. Right now he was picking apart one of Ricky’s little lessons in the finer points of petty crime.

– It’s the ones with the phones that get me
, Ricky said. He never spoke to Ziggy out loud. Their conversations always took place in his head.

– What do you mean? What’s wrong with them?

Ricky never carried a phone. He had no need for it. If he ever managed to steal a decent one, though, he knew a place in the East End where he could sell it for up to fifty quid. So he always found it a bit weird how everyone else was so obsessed with them.

– Well, how many people can we see? Five hundred? And half of them are staring at their screens or taking selfies. Seriously, I could pick the pocket of any one of them, easy as falling off a log.

– Then why don’t you do it? Your rent’s due tomorrow, and we haven’t eaten for two days.

He was leaning against one of the stone lions in Trafalgar Square, having worked out ages ago that this was a good place to be invisible. Invisible was how he liked to be. Invisible was good for a pickpocket. There were loads of other young people there. Some of them were splashing in the fountains. Some were chasing pigeons across the square. Others were kicking their heels behind their mum and dad as if they were in the middle of the world’s most boring day. Nobody would ever notice just one more kid loitering by the lions.

Trafalgar Square had another advantage. There were
always
tourists there. Packs of them, staring up to the top of Nelson’s Column and barely paying any attention to what was going on around them. These tourists were easy pickings. They were like walking cash machines where you didn’t even need to use a cash card to withdraw your money.

– Over there. North side of the square. A couple of Thrownaways.

‘Thrownaways’ was the word Ricky used for the homeless kids who worked the streets of London. They were everywhere, if you just opened your eyes and looked – which most people didn’t, of course. At night they met in the dingier parts of King’s Cross or under the bridges that spanned the Thames. The Thrownaways were a rough bunch who congregated in gangs, which could be aggressive and violent – Ricky kept his distance. He’d only ever had one proper encounter with them. He glanced down at the wrist of his left hand to see a pale white scar following the line of his arm. It was a reminder of how that little encounter had ended badly for him.

He squinted as he looked across the square. A girl about his own age was standing half a metre behind a Japanese man taking a photo of his girlfriend. A boy was walking swiftly in her direction. He’d be next to her in about five seconds. They made momentary eye contact.

– Watch this. Oldest technique in the book.

The girl stretched out her left hand. She slipped it into the side pocket of the Japanese man’s linen jacket. When she removed it, she was carrying something. A wallet. It all happened very quickly, like the flicking of a gecko’s tongue.

Now the boy was right behind her, still walking. Even Ricky couldn’t see the moment when the wallet changed hands. The boy disappeared into the crowd. For all Ricky knew, he’d already handed the wallet to a third accomplice. A few seconds later, the Japanese man was asking the girl to take a photo of him and his girlfriend. She agreed with a smile.

– You could join the Thrownaways if you wanted, you know. Get someone to work as your partner. It’s safer that way.

– Well, I don’t want to. If we had a partner, they’d grass us up if things got tricky. The do-gooders would have their hands on us before we knew it.

And anyway, Ricky thought, he hadn’t been ‘thrown away’ in the first place. He’d left home – if you wanted to call it that – of his own accord. And he wasn’t a street kid, exactly. He wasn’t living in a doorway or a cardboard box, or under a bridge, or even in a hostel. He had a place to stay. In his position, little things like that made a difference. It was a question of pride – even if it did mean having old Baxter as a landlord.

He continued to scan the crowd and ignored the gnawing hunger in the pit of his stomach. Ziggy was right. Today was Thursday. He hadn’t eaten since Tuesday lunch time. It wasn’t that he hadn’t been busy. Far from it. He’d grabbed three wallets since then. Forty pounds in the first, twenty in the second and fifty in the third. A good haul, but not enough yet to pay his monthly rent to old Baxter. Ricky’s vile landlord would be round for his money tomorrow evening, which meant Ricky had to turn at least one more trick. Especially if he also wanted to eat.

He picked out a couple of possibles. There was a mum pushing her kid in a pushchair. Ricky never pickpocketed young mums. It didn’t seem fair, somehow. His eyes picked out a harassed-looking teacher with a bunch of school kids. No way. The teacher wouldn’t be a problem, but Ricky knew that children were more observant than adults. They saw everything.

– So just go for one of the idiots looking at their phones
, Ziggy suggested,
if they’re so easy
.

– Nah. Like shooting fish in a barrel. Got to keep your skills fresh.

– Oh, come on, Ricky. You must have stolen two hundred wallets in your time. You’ve never been caught.

– Yeah. Because I keep my skills fresh.

He continued to scan the crowds. A few seconds later, his eyes locked onto a man walking towards Nelson’s Column from the north-west corner of the square. He was tall, with broad shoulders. A black guy, his head was bald and shiny, and he wore a blue cagoule, even though there was no sign of rain. He seemed to be sweating a lot – as he walked, he patted his bald pate with a handkerchief. What was more important, the cagoule was flapping open, its unzipped outer pockets clearly visible, a map of the tube sticking out of the man’s trouser pocket.

– A tourist
, Ricky thought. He bent down and undid the lace of his right shoe. Then he jumped down from the plinth on which the stone lion sat. He walked twenty paces north before turning ninety degrees to the right. Ten paces, he reckoned, before his path crossed his target’s. He watched the man out of the corner of his eye, and even from a distance he could tell where the wallet was – the right-hand pocket of the man’s cagoule was slightly weighted down, as though it contained something heavy. In Ricky’s line of work, heavy wallets were the best kind. He also saw something he hadn’t noticed from his vantage point on the plinth. The man had a stout walking stick in his right hand, and walked with a slight limp.

Ricky was a metre away from the man when he ‘tripped’ over his undone shoelace. It was, he thought, quite an impressive fall – one that he had practised in private probably a hundred times until he could do it without hurting himself. But now, splayed on the hard ground directly in front of the man’s feet, he screwed up his face in pain and started to shake.

The man stopped. He looked down at the figure sprawled at his feet. ‘What the hell’s this?’ he said. ‘Are you auditioning for Coco the Clown?’ He sounded like he had something in his mouth, and Ricky realized he was sucking a sweet.

‘
Ow!
’ Ricky wiped away a non-existent tear with the back of his left hand. He held his hand up, so the man could pull him to his feet. The man peered at him. He looked slightly amused.

Magic at Silver Spires by Ann Bryant
The League of Doorways (A Book of Vampires, Werewolves & Black Magic) (The Doorways Trilogy - Book Two) by O'Rourke, Tim
Crown of Shadows by C. S. Friedman
Surrender in Silk by Susan Mallery
Long Hard Ride by James, Lorelei
The Gangster by Clive Cussler and Justin Scott
Mom in the Middle by Mae Nunn
Nobody Loves a Ginger Baby by Laura Marney
Rebellious Bride by Lizbeth Dusseau
Not Bad for a Bad Lad by Michael Morpurgo