Read Under the Cornerstone Online 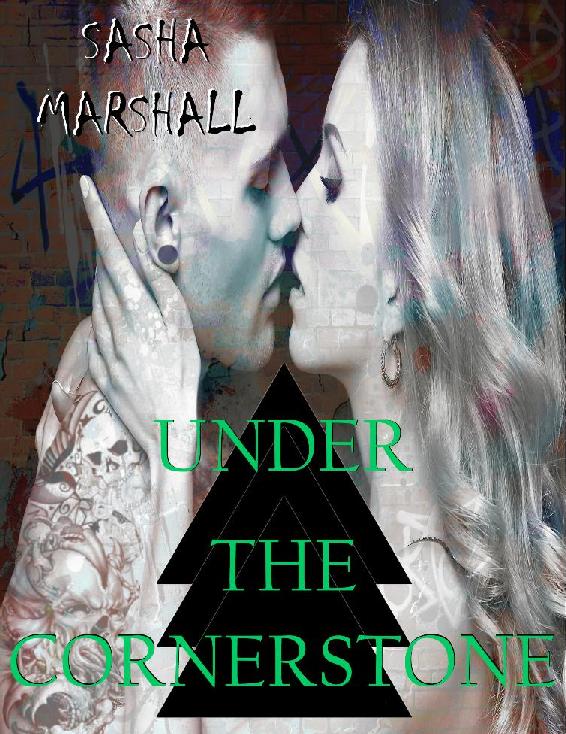 Without limiting the rights under the copyright reserved above, no part of this publication may be reproduced, stored in or introduced into a retrieval system, or transmitted, in any form, or by any means (electronic, mechanical, photocopying, recording, or otherwise) without the prior written permission of the above author of this book.

For anyone who’s ever suffered from anxiety,

I pray your soul finds peace. I hope that whatever demons claw at you, die quick and painful deaths. Sometimes it seems the whole world becomes our demon, as we weave through the complexities and complications of this life. With age, experience, and wisdom, we often find that the world is indeed our nemesis. It is a tiring process to constantly go against the grain simply because that is who you are. It is defeating at times to refuse to follow the sheep. This is certainly a cause for anxiety, as society always has a way to remind you that you are the black sheep. To that, I say, fuck society. Be yourself. Love yourself, and never, ever feel anxious again because you are a great spirit. Do not hide you, as this world would be a much duller place without you.

“Great spirits have always encountered violent opposition from mediocre minds. The mediocre mind is incapable of understanding the man who refuses to bow blindly to conventional prejudices and chooses instead to express his opinions courageously and honestly.”

This book was inspired by a song, as most of my books are to one degree or another. I almost didn’t publish this book, because I didn’t want people to concentrate on the source of my inspiration instead of the story this book holds. This story was inspired by Highly Suspect’s song “Vanity”. I made up the rest of the shit, but I always give credit where credit is due. While the book does have the band member’s first names, and the name of the fictional band is named after another of their songs, “Blood Feather”, this book is not about the musicians in Highly Suspect, therefore it is not a fan fiction piece. I’m honestly too lazy to change first names or band names, they already had first names and a song I liked the title of, and that’s the honest truth. No sense in reinventing the wheel and all. I do not know them personally, therefore, I cannot attribute any likenesses or lack thereof between the characters I created and the members of Highly Suspect, and this includes the massive giant named Jimmy I saw on a stage in Montgomery one night. I’m sure they all served as muses in one capacity or another, but nothing more. To clarify, this book was entirely inspired by the song “Vanity”, not the musicians, but thanks to the band for the inspiration.

If you’re one of those people that has to have a say in what genre I classify this book, then go put it in a review. Don’t email me. (Seriously, I have a life and don’t get down with hate, so keep your hate mail to yourself. I’m all about the peace, bruh.) They wrote a song, I found inspiration from it, then I wrote a book about three guys with the same names, yet they aren’t the same people at all. They are fictional characters,
fictional
being the keyword here. Please don’t show up at their concerts asking them about this book, or about Noely, or about Jimmy Crawford. They won’t know what the fuck you’re talking about, because this isn’t a biography. Once again, it is a work of
fiction
. I’m hoping this serves to clear up any misunderstandings before they begin. My service to mankind is done. Peace out.

This is a work of fiction. Names, characters, places, brands, media, and incidents are either the product of the author’s imagination or are used fictitiously. The author acknowledges the trademarked status and trademark owners of various products referenced in this work of fiction, which have been used without permission. The publication/use of these trademarks is not authorized, associated with, or sponsored by the trademark owners. Please be advised there are sexual situations, profanity, and other situations which are not suitable for anyone who is younger than 18 years of age.

Franz Kafka once said, “I think we ought to read only the kind of books that wound and stab us. If the book we’re reading doesn’t wake us up with a blow on the head, what are we reading it for? So that it will make us happy, as you write? Good Lord, we would be happy precisely if we had no books, and the kind of books that make us happy are the kind we could write ourselves if we had to. But we need the books that affect us like a disaster, that grieve us deeply, like the death of someone we loved more than ourselves, like being banished into forests far from everyone, like a suicide. A book must be the axe for the frozen sea inside us. That is my belief.”

Kafka wrote The Metamorphosis in 1915, and after I’d read his quote on the internet I thought about how my own story is both reflective of his opinion on books and of the metamorphosis process. My story still wounds even me, and it isn’t full of happily-ever-after’s. I grieved deeply at so many points during my life. I’m telling you my story of metamorphosis. I’m going to tell you how I was wounded and stabbed by loved ones. I hope it wakes you up like a blow to the head so that if need be, you can also become a colorful butterfly too. Hopefully my story affects you like a disaster, because it often felt as though I was in the middle of chaos, despair, and destruction. I hope you realize how deeply I grieved someone I loved as though he had died, even though he was very much alive. I hope that my story tears your heart open, even if only a little, and changes your life forever. I hope it makes you see that love never dies. And while it never dies, love can also destroy us at times. It can coddle us and keep us warm at night, but it can also tear us apart, leaving our world ravaged and empty. At some point, each of us has to decide if that love is worth fighting for. Is it worth a second chance? A third chance? Can there ever really be a happily-ever-after? If so, how much of it depends on us?

Metamorphosis… the changing of one’s self to a completely different one. Caterpillars change completely from an insect that crawls in the dirt and trees, eating its own weight in leaves. The insect with twelve-legs will then shed its skin four or five times before it wraps itself in a cocoon and digests itself. It’s a tough transformation. As the cells divide inside the cocoon, the caterpillar mutates or transforms into something beautiful… the butterfly. Once metamorphosis is complete, the butterfly emerges, only it isn’t ready to fly just yet. You see the butterfly is still wet and there’s not yet blood flowing to the wings, so even though they’ve been through a beautiful, but a painful transformation, they aren’t quite ready to fly off into the world. The butterfly sits in the cocoon and flutters its wings until it dries and the wings have enough spirit in them to spread and give it flight. And so, in all of its colorful beauty the butterfly spreads its wings and flies away into the cosmos, showing the entire world how beautiful it is. It no longer lurks on the land and in trees, eating leaves, no, now it wants nectar. It wants to divulge in the greatest and sweetest thing the world has to provide its young self.

I think the universe gave us the metamorphosis of the butterfly so humans can remember we often undergo the same process. Unluckily, some people never really undertake all the matters that are needed for a metamorphosis to truly happen. Not enough people recognize they should or want to be someone different. I realized I didn’t recognize who I was at all. Life circumstances shaped my mind and I believed I possessed a role to play for twenty-six years, but the role I played was for the people I loved. It was never for myself.

I also had to find out that nothing ever remains the same. The world is constantly evolving and so are we. We change. Sometimes the change is insidious, only sometimes it is as miraculous and considerable as the metabolism of the butterfly. This happens to our relationships with other people, and in my own story I’ve often looked back to ascertain exactly where in time one of my relationships changed. I attempted to determine when the lines blurred and feelings changed. I wanted to know, why? Sometimes we never find out the why and have to learn to embrace what our hearts tell us.

I stare at the girl in the mirror and then at my phone that incessantly rings and pings. I tried to cover it up, but all the makeup in the world won't hide the bruises and busted lip. This was the last time he put his hands on me though. I'm through with his shit.

Rich calls for the third time tonight. I stare down at my phone knowing I'll have to answer eventually. I have to make up some last minute excuse for not being there.

I grew up with the boys in Blood Feather, and now they've gone and got themselves a record deal. They leave next week to tour as an opening act all over the U.S. I always knew they'd make it. Tonight is their going away party since they'll be too busy loading up next weekend to throw a proper party. And I'm going to miss tonight. I'm missing their big night because my boyfriend, scratch that my very recent ex-boyfriend, didn't like what I was wearing out tonight. He let me know not only with his words, but his fists.

Johnny calls next. It's his sixth time. He'll be the one to show up at my door in the middle of his own fucking party.

"You're over an hour late,” he says with concern in his voice.

Me and my damn promptness. Now it is biting me in the ass.

I hesitate. I hate lying, especially to him.

"Yeah. I'm here. Look, I just started feeling ill all of a sudden and I hoped it would pass. It must've been what I ate today."

He doesn't speak, but I can hear the crowd getting quieter as he steps away from them. I hear a door open and close, and then perfect silence.

"Did you hear me?" I ask in a rush to end this conversation.

"Yeah,” he replies and then hesitates.

I hear the click of his lighter as he lights a cigarette and takes several hits off of it before he speaks again.

"What did you eat today?"

"What?" I ask with too much pitch in my voice.

His tone becomes agitated, “What. Did. You. Eat. Today?"

"Neither is lying to one of your best friends."

The Odd Ballerz by Robinson, Ruthie
The Vasectomy Doctor by Dr. Andrew Rynne
A Week in Paris by Hore, Rachel
The Mailman's Tale by Carl East
Not This August by C.M. Kornbluth
Jazz Moon by Joe Okonkwo
Sixteen and Dying by Lurlene McDaniel
Baby Experts 02 by Lullaby for Two
Tales from the Tent by Jess Smith
Harlequin Intrigue June 2015 - Box Set 2 of 2: Navy SEAL Newlywed\The Guardian\Security Breach by Elle James