Read Under the Gun Online 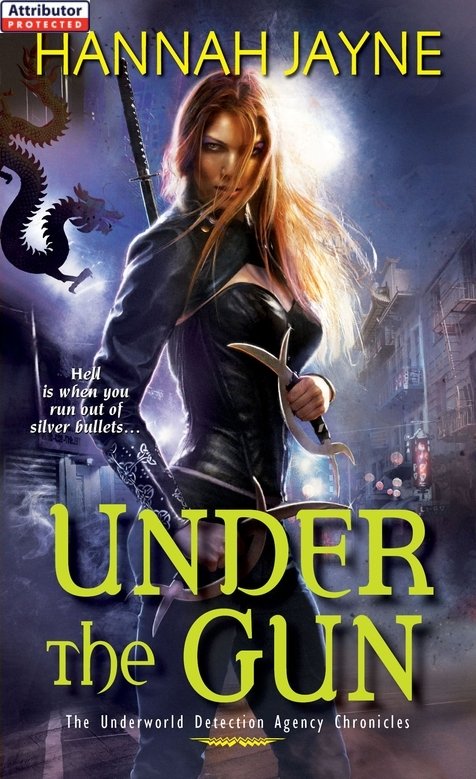 HUNGRY WOLF
Suddenly, there was a charge in the air. It was the same thing that made cats arch
their backs and spine their tails; the same thing that put dogs on snarling alert.
My hackles went up, adrenaline boiling my blood. I licked my lips, the saline taste
of danger in my saliva.
I heard the growl, first.
It was a low, predatory rumble. Earthy and primitive, like nothing I’ve heard before.
Except I did hear it before. Once.
My feet were rooted to the ground, but I turned my head slowly. The rumble was low
enough that I couldn’t hear which direction it came from. But it called to me, and
I knew where it was.
“Lawson.” I heard Alex call behind me and I slowly held up a hand, silently willing
him to understand, to stay put.
And when I turned again I saw it. A wolf, in the narrow, darkened corridor between
two houses. I could make out nothing but his eyes and his teeth as the black rim of
his lip curled up into a fearsome snarl . . .
Books by Hannah Jayne
UNDER WRAPS
UNDER ATTACK
UNDER SUSPICION
UNDER THE GUN
Published by Kensington Publishing Corporation
UNDER THE GUN
The Underworld Detection Agency Chronicles
HANNAH JAYNE

In Situ by Frazier, David Samuel
With You In Spirit (The Bassinville Witches Series) by Stork, Miranda
Johann Sebastian Bach by Christoph Wolff
Finding Gary (The Romanovsky Brothers Book 4) by Burns, Trevion
Empire of Bones by Liz Williams
Seven Year Switch (2010) by Cook, Claire
Blood Deep by Sharon Page
The Professor by Kelly Harper
The Lady and the Locksmith by Cody Young
Shameless Exposure by Fanshaw, Robert