Read Unlike a Virgin Online 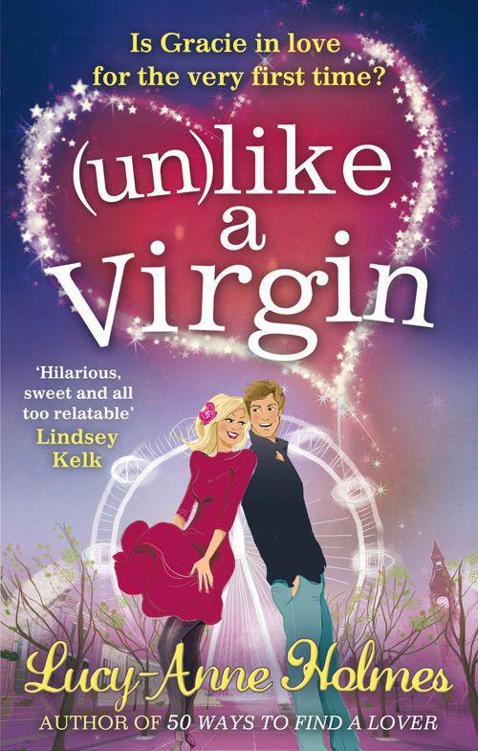 Lucy-Anne Holmes is an actress living in London. She is the author of two previous novels,
50 Ways to Find a Lover
and
The (Im)perfect Girlfriend,
which have been published in ten countries. To find out more about Lucy, follow her on Twitter, read her blog or chat to her on Facebook.

For my beautiful sister.

My name is Gracie Flowers and I’m an estate agent. But before you say, ‘Oh, bloody hell, you’re not, are you?’ let me defend myself by saying that I’m not like all the others. For starters, I’m nice. For seconds, I can’t lie. Like, really can’t lie. When a client asks other estate agents if a four foot by five foot kitchen is small, they’ll say something like ‘Oh, no! It’s far from small. It’s compact and demonstrates a remarkable use of space. You’ll get all the mod cons in there.’ If a client asks me whether the five foot by seven foot kitchen is small, I’ll choke and say, ‘Yep, tiny. Try to swing a gerbil in there and you’ll dislocate your arm. You’ll be keeping your microwave in the living room.’ You’d think these qualities would be a hindrance when selling houses, but they’re not. They’re really not. I’m an astonishingly good estate agent, and no one was more surprised about that than me. Well, maybe my mum.

Ken Bradbury, my boss, the owner of the London chain of estate agents, Make A Move, says that I’m the best female
estate agent in London. And although I always say, ‘Ken, you sexist toad, lose the word female,’ I’m as chuffed as a pub patio ashtray to be respected for what I do. What’s even weirder than the fact that I seem to be peculiarly brilliant at selling houses is this: I absolutely love being an estate agent. Choosing a home is a massive decision in people’s lives and it’s me, Gracie Flowers, who’s there making sure they don’t mess it all up. I match the person to the house, so that they can create a home full of love, dreams and happy memories. And I also get to nose around other people’s homes, which can be very enlightening. It’s the best job in the world. Why we’re as popular as bankers I don’t know.

There is a bummer, though, and it’s a big old builder’s bummer. I have to work on Saturdays. So when normal people are lying in bed all snugly and drooly, dozing and deciding where to go for breakfast, I’m wondering if I can get away with just one more eight-minute snooze and whether I have any clean pants for the day.

I wake up in the same way, at the same time, every Saturday. It’s not by an alarm clock. I don’t need an alarm clock. This isn’t because I’m a perky early riser. Far from it. It’s because I live in the noisiest flat in London. My Saturday wake-up call is as follows:

7.42 a.m. – The freight train from Portsmouth to King’s Cross thunders, no roars, no lacerates my eardrums, as it travels along the railway line a few feet from my bedroom window.

7.54 a.m. – Another freight train; the longest of the week. It lasts for nearly two minutes and sounds like the Red Arrows are doing a flying routine inside my pillow.

8.03 a.m. – The third alarm call comes when the men in
the glass shop below me arrive and turn Capital FM on. Very loud.

8.15 a.m. – The men in the glass shop below me start smashing sheets of glass.

For some reason the combination of smashing glass, the freight train and the crackling of Capital at around the eight fifteen mark arouses my boyfriend, Danny. It tends to be at about this time that I feel his erection on my bottom.

I lie still and let him do it anyway. He doesn’t normally take very long in the morning.

‘Danny, baby, be careful, I’m not taking the pill at the moment,’ I mumble into the pillow. I forgot I needed to go to the doctors and get another prescription for my contraceptive pill. That was stupid, Gracie. Stupid.

I’ve been going out with Danny Saunders for ten years. He asked me out two days before my GCSEs started. Actually, technically they’d already started as I’d completed my French oral the day before. This means I should be able to say, ‘Excuse me, where is the nearest bank?’ in French, but I can’t. I haven’t the foggiest. Anyway the bulk of the exams,
the two a day for about a fortnight, were still looming at this point.

I didn’t know much about Danny when he stopped me in the corridor and proceeded to cough and look at his feet for a few minutes before eventually saying, ‘You know this shit prom thing, do you want to go with me?’

I knew his name, though, Danny Saunders. I thought it was a nice name: friendly, blokey, approachable and pronounceable. I knew he was clever – he was in all the top sets – I was aware that he was pale and into computers, and I was definitely familiar with his height. ‘Bloody tall,’ I called it. It turned out to be six foot three. But that was about all I knew.

I kept myself to myself at school. At that time my mum and dad were the Torvill and Dean of the ballroom dancing world. They’d won the World Ballroom Dancing Championships for seven consecutive years, but all this was before
Strictly Come Dancing
and ballroom dancing’s subsequent rebirth of cool. And this was Kensal Rise Community College, where you were only cool if your dad was a DJ or in prison. ‘Your dad’s a gay lord,’ people would say to me, if they bothered to say anything at all. Hence the keeping myself to myself.

I was therefore surprised to be asked out to the ‘shit prom thing’. I looked at Danny Saunders with the nice name closely and noticed that he was at least a foot taller than me, lean and broad-shouldered. I was also pleased to see that he was wearing a Ramones T-shirt. My dad had a Ramones T-shirt, and at the time my dad was my hero. I looked into his deep-set brown eyes and nonchalantly said, ‘Yeah, OK, why not?’ But inside I was thinking, Phwoar, Danny Saunders is fit.

I’m not thinking that this morning, though. I’m thinking
something else entirely. The eight seventeen passenger train hasn’t even gone past and Danny is grunting and lolloping off me like a roll of old carpet. But that’s not the worst of it: I can feel something gooey down there.

‘Danny Saunders, you arse!’ I screech, punching him in his annoyingly concave belly.

‘Plonker!’ I hit him again.

‘Can’t you get that morning-after pill thing?’

I sigh, sit up and wipe my eyes like a tired child. I’ll have to get the morning-after pill thing. Thank you, Danny, for pointing out the bleeding obvious. A baby definitely isn’t in my plans for the foreseeable future. But the busiest weekend in the modern world is facing me and God knows when I’ll find the time to fit in a trip to the pharmacy.

But I mustn’t worry about that for the moment, I think, smiling to myself as I get out of bed. I have a big – no, very big – morning ahead.

I have a feeling that my bathroom routine is different to most people’s. I can’t be certain, but I’ve never met anyone who showers as quickly as I do. Danny tells everyone I shower as though an armed militia is beating down the door. I don’t have the heart to point out that it’s a ridiculous analogy, if it even is an analogy. I never did get my English GCSE.

If an armed militia were banging down my door I would hardly be in the blinking shower. I would either be trying to squeeze my bottom out of the small bathroom window or I’d be standing in the middle of the bathroom in a formidable Lara Croft stance, armed with a plunger and an aerosol, ready to punish the swines for hurting one of my precious doors. I own my flat. Not that I call it my ‘flat’. Because it’s not a flat. It’s a maisonette. I stripped and sanded all the doors myself and spent hours in Homebase gazing at shades of white before painting them all purple. I love my doors.