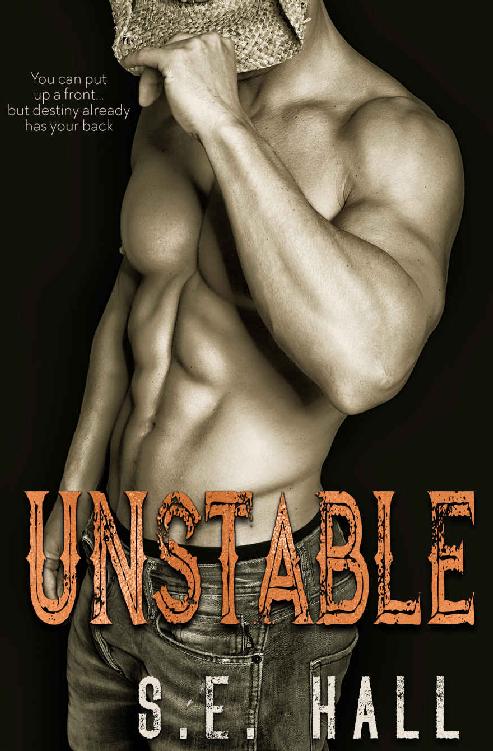 This book is dedicated to my mom.

“
WHAT IN THE NAME
of crazy ass females are you doing?”

“I’d tell you, but I’m not really helping you if I just give you the answer, so let’s try something new, dumbass.” I mumble the last word under my breath, ‘cause even though it’s true, Mama would beat my butt for saying it to him. “There’s a big tree,” I point, just in case he somehow missed it. “And I have a ladder, a thick rope, and a tire. Now, take your time. I know it’s a tricky one…then lemme’ hear any guesses you have. I’ll even tell you if you’re hot or cold.”

My mouth twists in delight when the anger causing his nostrils to flare makes its appearance as a wild blaze in his eyes.

Nothing pleases me more than getting under his skin.

“You got a death wish, girly? That water’s too shallow for a damn rope swing!”

Well, lookie there, he got it in one guess.

“And I count four rocks big enough to split a head open like a melon from where I’m standing. Don’t be dumb. You’re not hanging it!” He tromps over, grabbing my rope and slinging it to the other side of the river effortlessly. “As if you could tie a knot tight enough to hold anyone up anyway.”

He starts to walk away, breaking the cardinal rule of self-preservation when fighting with me: turning your back on me. So he has it coming…the hard kick in the ass I give him.

He stumbles a bit, but manages to stay on his feet, growling from somewhere deep in his chest.

He slowly turns and the wicked twist to his mouth has me bracing for his payback. Closer he comes, with quick, confident steps until he has me backed up against the tree. Leaning in, that curl grows into a full smile and our noses bump.

“You gonna try and hang the swing?” he asks in a low, grumbly test.

“Well, no, not now. I seem to be out of rope. And I suppose
—
” I turn my head to the side and look at anything but him.

“Maybe,” I casually hitch a shoulder. “But you really should mind your own business.”

“You are my business,” he says so smugly I can’t help but snap my focus back to him.

“I’m your business?” I scoff loudly. “And just how do you figure?”

“You don’t get to decide that! I do. And trust me, I will never, ever, want to be anything close to your business.”

“We’ll see about that.” He taps the end of my nose. “Lot of life left, and never’s a long time. So,” he starts walking away again, stopping to smirk back over his shoulder, “I’m likin’ my chances. I usually get what I want.”

I didn’t think much of it then…just another typical run-in with the “Ass of Ashfall.”

And I definitely didn’t tell her about the encounter. Because while it meant absolutely nothing to me…it would’ve meant everything to her.

And her feelings mattered.

“HENLEY? HENLEY CALVERT, IS
that you?” An unfamiliar voice pierces the air.

I hastily duck my head so that my long brown hair falls around me in a shroud of anonymity and hurry toward the door of Watson Law Offices, ignoring whomever it is calling my name.

There’s one main street in this town, cleverly named “Main Street.” I should’ve known better than to stand out in the open on its sidewalk if I didn’t want to be spotted. Guess I hoped that after eight years, the chances of being recognized would be slim.

But
why
would I have possibly allowed myself such dimwitted optimism? Small towns like Ashfall? Nobody ever forgets anything, or anyone. Especially when you give them something grossly outside of mundane to talk about—like I had.

Once inside the office, I chance a subtle peek back out of the glass door to make sure my beckoner didn’t follow me, and sigh in relief to find no sign of anyone. I turn and walk slowly to the receptionist desk, clearing my throat to get the attention of the woman behind it, her back to me as she files papers.

She spins in her chair and…
of course.

“Henley Calvert!” she shrills, if that’s the right word for actually managing to speak,
very
high-pitched, through your nose. I can’t remember her name, but I do know I went to school with her…and she was
not
a nice girl. One of the “Fallouts.” That’s what we called them, in honor of Ash
fall
— defined as a fake, two-faced girl who thought it was a real accomplishment to peak in high school, and a miniscule one at that, by preying on the insecurities and weaknesses of others rather than earning a name on their own merit. Perfectly personifying the worst of teenage girl stereotypes. And their caddy empowerment was only heightened, made too easy really, by living in a small town. Our own version of
Mean Girls
.

She flies around the desk to trap me in an unexpected, and
very
unwelcomed, hug. My whole body stiffens, arms pressed to my sides, and I count backward in my head until she releases me.

“My Lord, you haven’t changed a bit!” she gushes as she pulls back to survey me from head to toe. “You look exactly the same as the last time I saw you. Except, less crazy.”

Yeah, ‘cause that’s nice to say out loud. Hell, at least she said it to my face; that’s new for her, if memory serves correctly.

“What’s your trick? Get a little work done?” she sneers conspiratorially. “Don’t worry, you can tell me, it’ll be our little secret. Was it Botox? I
so
want to try that!”

No, I haven’t had Botox, you twit. I’m twenty-five years old.
But I have no interest in encouraging this conversation any further, so I simply deadpan, “You caught me.”

“Knew it!” She snaps her fingers, then uses one of them to make a cross over her heart. “I won’t tell a soul.”

Translation— she’ll tell everyone she sees, every time she sees them, for the rest of the week. Which works in my favor actually; better they blather about my non-existent cosmetic adventures than the old shit they’d drudge back up to say about me if left to their own habits.

“What’s it been now, six, seven years?” She frowns, the overdone, I-have-absolutely-no-real-remorse-or-empathy-for-you-and-I-wantyou-to-know-it kind of frown.

“Eight,” I respond as nicely as my plummeting patience will allow. “I have an appointment with Mr. Watson. Is he available for that?”

And there it is—her over-the-top hospitality, excluding the one underhanded, nasty comment of course, finally vanishes. I’m sure it was quite painful for her to maintain the façade as long as she did. Her face returns to its natural state, pinched in evil delight, confirming she really does need to check into that Botox. Guess the old saying about your face sticking like that is true…the deep grooves of a judgmental, superiority complex around her eyes and mouth are practiced, and permanent.

She then proceeds to all but bounce with giddiness as she takes great pleasure in dropping the bomb that I know has been itching her tongue this entire time. “
Your
meeting is with Mr. Watson,
Junior
.” Her tone erases any possible doubt; she remembers
a lot
more about me than my name and looks.