Read Until the Night Online 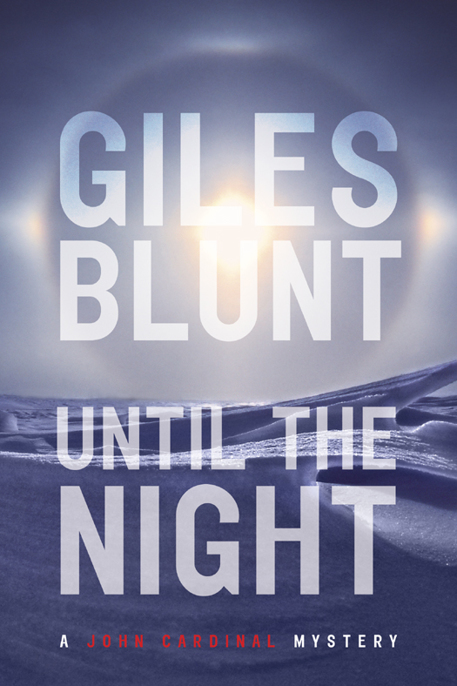 All rights reserved under International and Pan-American Copyright Conventions. No part of this book may be reproduced in any form or by any electronic or mechanical means, including information storage and retrieval systems, without permission in writing from the publisher, except by a reviewer, who may quote brief passages in a review. Published in 2012 by Random House Canada, a division of Random House of Canada Limited, Toronto. Distributed in Canada by Random House of Canada Limited.

This book is a work of fiction. Names, characters, places and incidents either are the product of the author’s imagination or are used fictitiously. Any resemblance to actual persons, living or dead, events or locales is entirely coincidental.

Well I lived with a child of snow

When I was a soldier

And I fought every man for her

Until the nights grew colder

From the Blue Notebook

We heard the plane before we saw it. The storm that had howled around us for three days and nights had finally limped away, leaving a thick cloud cover over the stillness that unfolded in its place.

Hunter had been out all morning ploughing the runway, if that is not too grand a word for the strip of ice that ran straight as a spoke from the lab at one end to the last of the beacons at the other. This was the pale blue gateway to Drift Station Arcosaur.

Wyndham and I had left the lab to come out and watch the plane land. The Twin Otters that arrived every two weeks were our only source of supply and we looked forward to them with pathetic eagerness.

Our coordinates by then were 82°'28'N 55°'20'W. We had drifted more than ninety geographical miles from our initial position in the Lincoln Sea, carried rudderlessly on the Arctic gyre. Two weeks previously we had passed the Alert defence installation. We actually put in a request to be allowed to use their airfield, instead of Resolute’s, for our resupply point, but they responded with a curt negative. Vanderbyl was indignant for days.

Kurt Vanderbyl, our chief scientist, was at this moment tending to a crop of waist-high radiometers and sensors. He was the oldest among us, a silvery, ascetic Dutchman who moved among the instruments like a priest administering Communion. His grad student, Ray Deville, had been at his side all morning, a walking clipboard with sunglasses and blue down jacket. At the sound of the
plane, the two of them stopped and turned to look, both shading their eyes despite the clouds.

The plane dropped into view, surprisingly close. Anyone new to the Arctic might have thought the pilot was in danger of overshooting the runway and ploughing right through the lab. I had had a pilot’s licence myself for years, but Arctic pilots are a breed apart and I still marvelled at their skills. The Otter set down on its skis and pounded toward us, coming to a stop less than fifty metres away. The pilot climbed out and waved.

Wyndham snapped a harness around his chest and I hooked him up to the sled. As we headed toward the plane, a passenger stepped out.

Who the hell’s that? I said.

His wife? I heard they split up.

They did. She’s here on her own project. Strictly professional—at least to hear Kurt tell it.

What a terrible idea.

I don’t know. He wouldn’t have agreed if he thought it would jeopardize anybody else’s research.

Vanderbyl got to the plane first. He took a suitcase from her, but they didn’t hug or make contact of any kind.

I think you know Rebecca, he said to Wyndham as we approached.

She reached out a hand, and Gordon took off his mitten to shake it. Vanderbyl turned to me.

And this is Karson Durie, glacier man, otherwise known as Kit.

Ah, yes. Heard a lot about you.

We shook hands. Hers was slim, and warm from the plane.

She put her mittens on and stood with hands on her hips and made a quick survey of her surroundings. Wow.

I hope that’s a good wow, Vanderbyl said as Wyndham and I started offloading supplies onto the sled.

I don’t know, she said. She had a low voice, a velvet delivery that gave her every utterance the air of a confidence. I was just reading
about the first party to land on an ice island, she said. Some U.S. military thing led by a general. The first words out of his mouth were “Obviously no man can survive here. We must leave at once, if we can.”

All us old-timers know that quote, Wyndham said, slamming a box labelled Patak’s Curry Paste onto the sled. It’s exactly the kind of common sense that always gets completely ignored up here—which is the only way to get anything done.

Wow, she said again. This place is …

The two of them walked toward the camp, and something in the way they moved together would have told even the most casual observer that they were man and wife.

It’s stupid to bring her here, I said to Wyndham.

Why? Everyone’s got plenty to do. She has her own research, and God knows Kurt has enough to keep him busy.

There won’t be any. Rebecca’s a good researcher. Lovely girl, don’t you think? Woman, I mean.

What I think doesn’t matter.

A
WILD WIND BLEW ACROSS
Lake Nipissing, so loud it woke John Cardinal up and got him out of bed before his six a.m. alarm had even gone off. The sun was nowhere near getting up, but there was a big moon that lit the frozen lake and the trees that bent and swayed before it. As always at this time of year, the surface was studded with ice-fishing huts. Small branches blew across the lawn behind his building, a garbage can lid flew into sight and crashed into a tree. It rolled like a coin across the yard and out of sight again.

“I don’t believe it,” Cardinal said. He switched off the kitchen light to see better. He had been born and raised in Algonquin Bay and, except for a dozen years or so in Toronto, had lived here all his life. “The Bay,” as it was known to locals, was only 340 kilometres north of Toronto—nowhere near the Arctic—but its idea of winter was severe. Cardinal had seen a lot of unusual weather phenomena over the years, but he had never seen anything like this. The fishing huts—not all of them, but some—were migrating, dislodged from their moorings by this implacable wind and travelling across the ice.

His phone rang and it was Chouinard telling him not to bother coming
in, he should head straight for a crime scene out on Highway 17. By the time Cardinal was in the car, the wind had blown away across the hills.

The motel was located on a slight rise, and was almost hidden by a copse of trees except for its garish sign. Cardinal parked the car just behind the coroner’s BMW and switched off the engine. He set the handbrake and looked at Lise Delorme, but she was already getting out.

Dawn breaking, clear and windless. January sun barely clearing the trees. They walked uphill past the other vehicles—the cruisers, a couple of unmarkeds, the ident van—toward the motel.

Delorme pointed to the sign. “Would you want to stay in a place called Motel 17? Really, what was the guy thinking?”