Read Until the Sun Falls Online

Until the Sun Falls 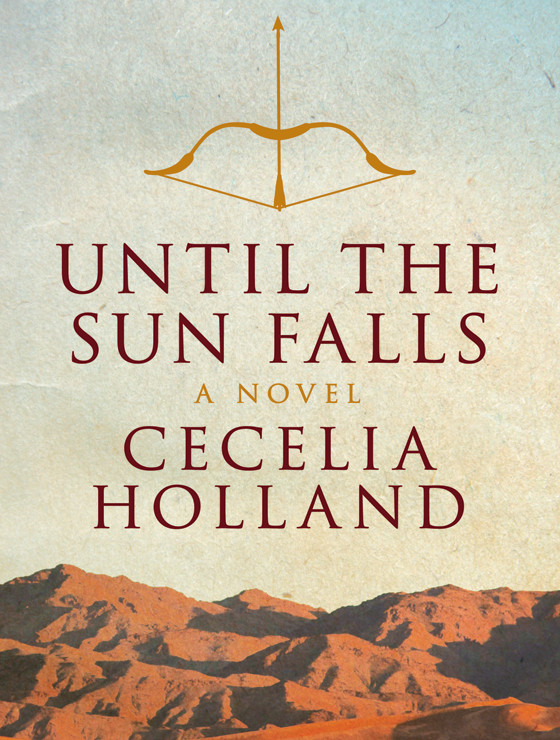 Until the Sun Falls

All for different reasons

“If Heaven grants a way, you will embark on wars beyond the sea…. Beyond the mountain rocks you will launch campaigns…. Send back news on wings.”

“Hence fear and trembling have risen among us, owing to the fury of these impetuous invaders.”

Temujin, Genghis Khan, died in 1227, and his empire, which stretched from the Volga to the Yellow Sea, was divided among his heirs. According to the custom of the Mongols, Tuli, the youngest of Temujin’s four sons by his first wife Bortai, received the heartlands of the Mongol people: the territory around the Onan and Kerulan rivers; this was the core of the empire, the Mongols’ home graze, the stronghold of the tribe. To the third son, Ogodai, fell the land immediately west of Tuli’s portion, and the Great Kuriltai, the assembly of all the notables of the Mongols, elected Ogodai the Kha-Khan—overlord of all the world. This was according to Temujin’s wish. The second son, Jagatai, received the Transoxiana—modern Uzbek and Kazakh.

The eldest of the four sons, Juji, was dead. Bortai had spent the nine months preceding his birth as a prisoner in an enemy camp, so his paternity was in dispute, and although Temujin officially acknowledged him as his son, relations between them had been strained at best. Yet Juji’s, his second son Batu, got a full share of the inheritance: the land from the Aral Sea to the Volga “and as far as Mongol horsemen had trod.”

Although each khan was master within his own domain, the Kha-Khan was supreme over them all in what we would call foreign policy. When Batu struck west across the Volga, he did so as the servant of Ogodai Kha-Khan, and the Kha-Khan sent his great general Sabotai to serve as Batu’s chief aide. Mongol tradition had awarded to Tuli the great majority of the Mongol army, and Batu recruited his troops mainly from conquered peoples. To swell their numbers, and probably to raise the general standard of discipline and talent, Batu appealed to all his relatives to come and bring their personal troops.

At this time the Mongol armies were without peer. Not for twenty years was Mongol cavalry to suffer a major defeat anywhere in the world. They were nomads, bred to the natural violence of the steppes, trained since babyhood to shoot and ride, and they considered war the chief occupation of men. They used compound bows with a pull of around one hundred sixty pounds and a killing range of up to three hundred yards. Their horses were as hardy as the men themselves, and just as highly trained. The basic unit of the army was the tuman, or column of ten thousand, subdivided into thousands, hundreds and tens. Each man was equipped with two bows and a string of led horses that he could switch to when his own mount tired.

They were tremendously mobile; often armies unused to fighting Mongols thought that they were battling several columns, when actually they were faced with only one, operating at great speed. In the European war, one Mongol tuman covered two hundred and seventy miles in three days. Speed is a hallmark of the nomad army; discipline is not. The Mongols were disciplined to drill-like precision. In an age when most commanders thought it a feat of organization if a majority of their troops arrived on the battlefield in time to fight, the Mongol generals consistently coordinated the movements of separated columns down to the last detail. Just how widely separated the columns could be Sabotai proved when he managed the European invasion with an army in Poland and another in Hungary communicating almost flawlessly across a rugged mountain range, in the winter. Nor were their communications less effective with the Kha-Khan, six thousand miles away in Karakorum. Mongol couriers, riding from waystation to waystation, sometimes averaged two hundred miles a day.

The army that stood poised on the Volga River in our year 1237 contained a full fifteen tumans of the finest Mongol horsemen—one hundred and fifty thousand men. In Sabotai it possessed the greatest living Mongol general, veteran of the two Khwaresm wars, of the Chinese wars, co-leader with Jebe Noyon of the great raid across the Caucasus in 1221. It also contained a number of the Altun Uruk, the Golden Clan, descended of Temujin and bred to rule the World-Empire.

Their first task was to subjugate the tribes north of the Caspian—the Kipchaks, the Alans, the Old Bulgars and the Old Magyars. This they accomplished in the year before this story opens. In the attack on Russia and the invasion of Europe, I’ve followed the accepted timetable as closely as possible; the most important exception is that I’ve skipped the year between the fall of Kozelsk and the attack on South Russia, during which the Mongols rested and chased rebellious Kipchaks.

Psin and his family are my invention. The other major characters are taken from history. The only one of the Altun Uruk to whom I may have done a great disservice is Mongke, who was ten years older and probably a good deal more like his father Tuli than I’ve made him.

With some misgivings, I’ve used modern place-names almost exclusively: the references run from Korea to Vienna and sometimes it’s better to be understood than right. I’ve tried to use the most familiar forms of the various Mongol words and proper names: thus the Turkish “Yasa” instead of the more correct “Jasagh” and “Genghis” instead of “Chingis,” which I am informed is the
only
way to spell it in English.

Finally, the quotations, with the exception of the one from the letters of Frederick II, are from the
Secret History of the Mongols.
An official history of the dynasty begun during the reign of Kubulai Khan, in the 13th century, it was translated from the original Mongol into Chinese, from the Chinese into Russian, from the Russian into French, and from the French into English. Nonetheless it retains its fresh and vigorous spirit, the zeitgeist of a warrior people.

Much research has been done on the Mongols since I wrote this book but the story seems intact. I’ve often thought it’s as much about Americans as it is about Mongols. I’ve made a few minor wording changes but nothing anybody will notice.

Ye Lui himself met Psin at the door and walked behind him
into the anteroom. Psin looked around at the shimmer of the silk hangings and the gold filigree and sat down. “I’m hungry.”

“As the Khan wishes.” Ye Lui snapped his fingers at the slaves prostrated behind him. “Would the Khan prefer rice wine or kumiss?”

“Kumiss.” Rice wine was a drink for effeminate Chinese. Psin glared at Ye Lui for suggesting it. The slaves pattered away, keeping their eyes averted. Psin undid the laces of his coat and threw it off. He thought of asking Ye Lui why he had been summoned, but Ye Lui would only say that he didn’t know. He probably did know. The slaves returned with a dish of meat, and Psin took it and dipped his fingers into it.

Psin chewed and swallowed. “I came by post horse—three days riding.” Let him figure out for himself how far Psin had come. He fixed Ye Lui with another glare and stuffed his mouth with meat.

The door from the corridor opened and a great hulk of a man walked in. Psin’s hand paused halfway to his mouth, and he stared.

“Sabotai.” He looked at the meat in his fingers and put it in his mouth.

Sabotai settled himself down on cushions. He wore silk clothes, and his hair and thin grey beard were neatly combed. “I came as soon as I heard you were here,” he said.

Psin tossed the empty bowl to one side. A slave scurried after it. “Everyone knows why I am summoned but me.” Sabotai had been with Batu Khan, fighting Alans and Bulgars and other, nameless tribes. “How does the fighting go, in the west?”

Sabotai smiled. “We have some Kipchaks yet to run down.”

Ye Lui poured kumiss into two bowls. Slaves brought one to Psin and the other to Sabotai. Sabotai looked into his as if he expected to find a bug swimming there.

“I suppose they mean to send me on campaign,” Psin said.

Sabotai smiled at his kumiss. “I shall leave the pleasure of telling you to the Kha-Khan.”

“I have been the Khan of my clan for more than thirty years. In all that while I’ve taken my people to winter pasture only four times. This was the fifth. Would have been the fifth. You could have let an old man—”

Sabotai smiled. “You know the Yasa—if your clan needed you you could have refused to come.”

Psin hissed through his clenched teeth.

“As for being an old man,” Sabotai said; he stroked his grey beard. “Have more kumiss.”

“On your father’s grave,” Psin said. He lifted the cup. While he drank he did not look at Sabotai.

When he set the cup down Sabotai said, “Insulting me won’t get you out of this. Whom did you leave with your people?”

“Tshant.” Psin wiped his mustaches on the back of his hand. “He’s been the true Khan since he was old enough to walk around a yurt—his father always off on the Kha-Khan’s errands.”

“Well. You’ll have to send for him, the Kha-Khan wants him, too.

Psin squinted at him, thinking. It had to be the western campaign. He wondered how Tshant would like that. “Where am I going?”

The Second Half by Roy Keane, Roddy Doyle
The Power of the Herd by Linda Kohanov
Sex With the Chef (Erotica) by Abbott, Alexandrinha
A House in the Sunflowers by Ruth Silvestre
To Have and to Hold by Patricia Gaffney
To Catch a Leaf by Kate Collins
Undersea Prison by Duncan Falconer
Chase of a Lifetime by Ryan Field
Demand by Lisa Renee Jones
Zombies: The Black Rock by Smith-Wilson, Simon