Read Up to the Challenge (An Anchor Island Novel) Online

Up to the Challenge (An Anchor Island Novel) 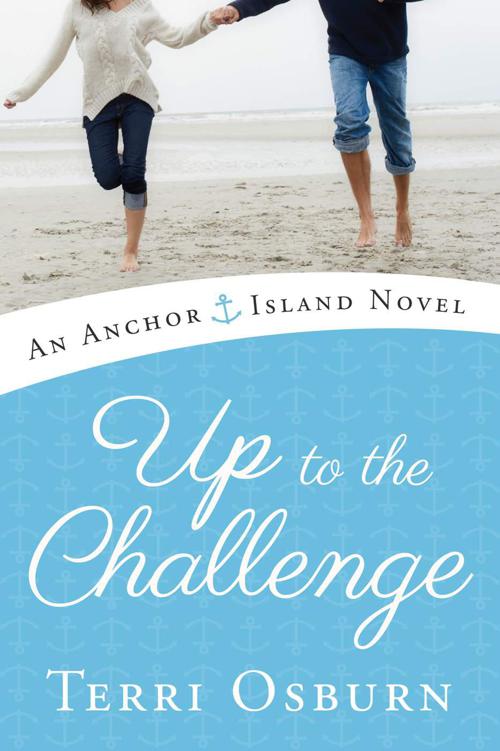 Meant to Be
(An Anchor Island Novel)

No part of this book may be reproduced, or stored in a retrieval system, or transmitted in any form or by any means, electronic, mechanical, photocopying, recording, or otherwise, without express writtten permission of the publisher.

For Fran. You’ve been with me from the beginning.

Thank you for the push.

S
id Navarro considered calling a nurse to remove the stick of righteous indignation from Lucas Dempsey’s ass. If he tensed up any more, the thing would snap off and put an eye out. Observing from the back of the hospital room, she couldn’t help but pick up on the tension rolling through the broad shoulders of the man she’d been in love with for half her life.

Not that Lucas knew about her feelings, which was the way Sid preferred it. His type was the simple, friendly, girl next door, always smiling and ready to mingle. Sid wasn’t overly complicated, but her unsociable nature along with an atypical job—foul-mouthed mechanic—meant she didn’t fit his mold. Best to keep her feelings on the down low rather than face the humiliation of rejection.

Lucas stepped closer to the foot of his father’s bed, waging what looked to be a battle between shedding a tear and tearing someone’s head off. Her best guess for the head-ripping victim would be Lucas’s older brother Joe.

Joe carried tension of his own where he stood four feet to Lucas’s right, holding hands with his girlfriend. Beth Chandler had been Lucas’s fiancée until six weeks ago, which justified the tension, but, since Lucas had supposedly
given his blessing to the new couple, the blatant anger didn’t make much sense.

Maybe the fiancée swap wasn’t the problem. Since Lucas had bolted from Anchor Island the moment the tassel on his high school graduation cap switched sides, he and Joe hadn’t seen eye to eye on much of anything. That made the rift ten years wide.

Sid and Joe had been working together on his fishing boat for just over five years and spent so much time together, the Dempsey family had more or less adopted her as one of their own. Except Lucas, of course. He didn’t visit the island often enough to get sand in his shoes, let alone notice an extended family member.

Sid couldn’t recall Joe mentioning anything about a new dustup with Lucas. Then again, Joe wasn’t exactly a talker. One of the things Sid liked best about him. She wasn’t one of those women who wanted a man to share his every thought and feeling.

In Sid’s opinion, women were just asking for trouble with that nonsense. Raised mostly by her father and big brother, she had enough experience around testosterone to know the shit going through a man’s head at any given moment should never be revealed for public consumption.

Especially not the female public.

“The nurse says five days in here, then six weeks recovery at home,” said Patty, Lucas and Joe’s mom. Technically, Lucas’s birth mother and Joe’s stepmom. She was talking about the boys’ father, who occupied the bed around which they all hovered. Technically, Joe’s biological dad and Lucas’s stepfather, who’d given the younger boy his name when he’d married Patty.

The Dempseys were a complicated bunch even before the fiancée fiasco.

Tom Dempsey had suffered a near fatal heart attack while tending bar in the family-owned restaurant during the lunch hour. Eight hours later, here he lay, prostrate with translucent skin and a mess of tubes sticking out of each arm. Cables looped into the neck of his hospital gown, assumedly plugged into stickers glued somewhere around the vicinity of his heart.

For a giant of a man known to be a pillar of strength and good health, Tom was doing a damn accurate imitation of a beached jellyfish. Sid fought a tear of her own, wiping the corner of an eye with the sleeve of her hoodie. She’d lost her dad to a heart attack when she was fourteen. Losing Tom Dempsey the same way would feel like having a four-sixty engine block dropped on her chest.

“But after six weeks he’ll be good as new, right?” Joe asked. Beth leaned closer and he tucked her under his arm. Lucas’s eyes narrowed, but he otherwise remained stoic.

Patty swiped away a tear, her voice cracking as she spoke. “I’m not sure ‘good as new’ is in the cards, Joe, but he’ll be with us, and that’s enough.”

“Is there still a chance he could …” Beth let the question trail off. The group exchanged glances as if daring one another to say the word no one wanted to hear. Sid kept her mouth shut, as unwilling as the others to tempt fate.

“I’m not dying anytime soon,” Tom said in a low, gravel-choked voice. His eyes were still closed, making it seem as if they’d all imagined the words.

“Tom? Honey?” Patty lifted his hand to her lips, pressing them against the tape holding an IV needle in place. “Can you hear me?”

“The heart might be on the fritz, but my ears still work.”

Relief swept through Sid. His voice wasn’t as strong as usual, but the words were so Tom, she knew he was going to be all right. The patient opened first one eye, then the other, licked his lips, then motioned toward a cup sitting on the tray to his right. After sipping through the straw Patty lifted to his mouth, Tom dropped his head back.

“Do I look half as bad as that look on your face says I do?” he asked.

Patty laughed as a tear slid down her cheek, unheeded this time. “Don’t you ever scare me like that again, Thomas Dempsey. I thought I was going to lose you.”

Sid nearly added a “Hear, hear!” to Patty’s words. The man needed to take better care of himself, that was all there was to it.

Tom smiled, ran a finger along Patty’s cheek, then shifted focus to his other visitors. “Now I know what it takes to get everyone in this family in the same room.” He bounced a raised-brow look between Joe and Lucas, then addressed the latter. “Thanks for coming all the way down here.”

“Not a problem,” Lucas said, jaw tight with a smile that didn’t reach his eyes. “Though you could have just asked. No need to get so dramatic.”

Noticing Sid in the back of the room, Tom asked her, “You think you could modify this bed to power me out of here?”

Sid stepped up next to Lucas and tried to ignore how good he smelled. “Got my tools in the truck. We can have you doing thirty-five down the highway in no time.”

“Don’t encourage him, Sid,” Patty scolded. “You’ll stay here until they say you can come home, and then you’re going to do everything the doctor says.”

“I’ve got a restaurant to run, woman.” Sid wouldn’t put it past the Dempsey patriarch to leap out of the bed and stomp back to the island, ass cheeks shining through the hospital gown all the way.

“You’re not running anything for at least six weeks,” Patty said, sounding as firm as possible under the circumstances.

“Then tell me who’s going to run the place. We can’t close the doors. Not in July, for Christ’s sake.”

“We’ll take care of it,” Joe said. Leave it to Mr. Responsible to step up. He needed to remember he couldn’t be in two places at one time.

And there was the little issue of her own income. Sid was so close to having enough money to buy the garage that would house her future. There had to be a way to make it all work.

“I can find someone else to run the boat for a couple months.”

Sid pointed out the obvious. “Every fisherman capable of running that boat is already running his own. And you’ve got charters booked for the next six weeks.”

Patty interrupted before Joe could argue further. “You kids have businesses of your own. We’ll find someone to run the restaurant through Labor Day, then reevaluate for fall.”

He might as well have pulled a pin on a live grenade
and held it over his head. Everyone fell silent, exaggerating the incessant chirping of the machines monitoring Tom’s every heartbeat.

“You’ll what?” Joe asked, stepping forward. Sid stood her ground between the men. This was no time for Joe to do something stupid.

Lucas crossed his arms, revealing impressive muscle below the rolled up shirtsleeves. “I said I’ll do it. I’ll run the restaurant while Dad recovers.”

“You heard the part about six weeks, right?” big brother asked. Beth tugged on Joe’s belt loop and he stepped back.

“I may miss a clue now and then, but I got that part.”

Sid wasn’t sure if Lucas meant to take a shot at Beth, but that’s what he’d done. Joe stepped forward again.

“As much as I want out of this hospital, I’m not getting kicked out because of you two.” Tom hit a button on the bed rail, sending the mattress into motion. Once he was satisfied with his new position, he released the button. “Lucas, I appreciate the offer, but are you sure you can get away from the law firm?”

Lucas leaned on the bottom bed rail. “I’m sure. Do you trust me to run your restaurant?”

Tom frowned. “I won’t dignify that with an answer.” He turned to Joe. “If he runs the place while you run the charters, can you cover some nights?”

“I’ll be there whenever you need me.”

“Nights,” Tom said again, as if passing down a final judgment. “Then it’s settled. You boys will run it together. I expect the place to still be in one piece when I come back. Understand?”

Both brothers nodded but neither spoke. Tom’s head dropped, the brief exchange apparently taking what little energy he could muster.

Beth straightened like a soldier called to attention. “Yes, but only until Lola and Marcus come back from New Orleans.”