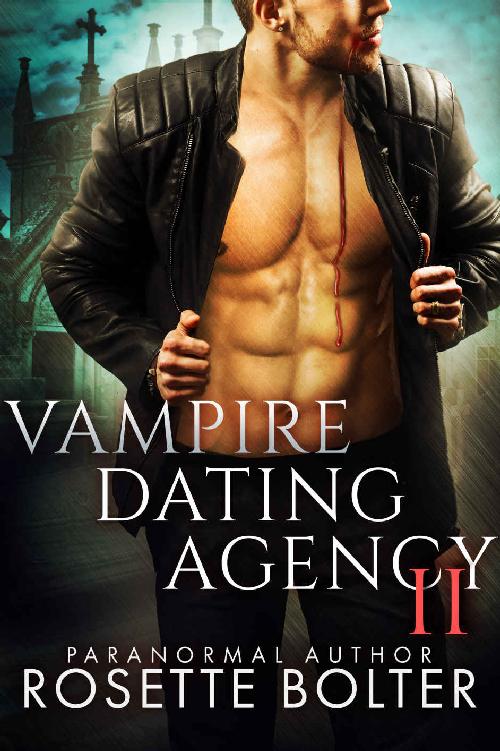 TO
RECEIVE AN EMAIL NOTIFICATION FOR NEW RELEASES IN THIS SERIES, SUBSCRIBE HERE.

Bright, artificial lights lit up the
insides of the national state park. Of course, the light could only stretch so
far. Twenty-four hours prior to the events taking inside Vampire Dating Agency,
Madame Arianne Nightshade was still alive and making her way through the clear
visible pathways. Her gaze shifted occasionally, moving off track and into the
surrounding areas of darkness. There was no question she was being watched. The
question was who was watching her, and why.

The sound of
a stick breaking, and a scampering of feet.

Her curious
eyes peered into the right of her, trying to make out if someone was there. She
couldn’t see anyone.

The phone in
her pocket buzzed. One new message.

Keep walking,
Arianne. Turn left at the next junction.

An image of
the bench was sent to her.

She put the
phone away and continued onward, following the pathway as directed.

The bench was
soon in her line of sight. She could see it easily as one of the light posts
was hanging just above it.

There was no
sign of the person she was supposed to be meeting here. But of course, they had
to be somewhere nearby…

Her steps
became slower as the bench became closer. All sounds, all impressions, all
fluctuations in the air – the vampiress observed all. She couldn’t detect
anything that would indicate an ambush. But perhaps all that was needed –

The phone was
ringing.

“Keeping
going, Arianne,”
a
deep voice commanded.
“Sit down on the bench. I will show you where I am.”

They were
using a synthesizer to disguise themselves.

Madame
Nightshade reluctantly moved towards the bench and sat down. She raised the
phone to her lips. “Where are you?”

“Lift your
head, and turn to your left. Look down the rest of the path until you reach the
main road. I’m standing at the end of it.”

Madame
Nightshade’s gaze followed the path until she reached the outline of a figure
standing near the road.

They were
facing her directly.

“Are you
coming over?”

“No,”
the voice on
the phone replied.
“We’re going to work from here.”

“You said you
had something for me?”

“Put your
hand underneath the bench. There’s something taped there for you.”

Madame
Nightshade stood up and then got onto her knees so to duck underneath the
bench. After a moment of fumbling she managed to pull off a small flash drive.

She inspected
it briefly then sat back down.

“Information
about the Paranormal Police. Addresses, locations, profiles, investigations,
everything you wanted to know about them and more.”

“Supposing
that’s what’s on there…” Madame Nightshade began. “What do you expect me to do
with this?”

“They’re
coming after you. The entire VDA. At the moment they’re planning on sending in
a new undercover that will give you all sorts of headaches. But that’s just the
beginning. Their end game is to wipe vampires completely from the face of
existence.”

“Well, thank
you. I will look at the information here and see what is of use to us. Is there
something you want from us now? For yourself?”

Madame
Nightshade peered out to where the figure was.

They still
hadn’t moved yet.

“I just want
to see those fuckers burn…”

Junk. Piles and piles of it. The desk
had been tipped over and was broken apart in certain places. Its contents lay
spread out around it in a half-circle ring. A lamp that had been sitting on the
desk was now hiding somewhere underneath the rubble. It was still on, a beam of
light shooting out a distort shape to the back wall. The room was otherwise
dark.

The door
opened slowly. A large, ominous figure was standing there – his eyes burning
with fierce red light. The news had already been handed down. This was not a
discovery. It was a confirmation.

The figure
took a three small steps into the room. Green eyes and claws in cages began to
retreat in fear. In between two cushioned cylinders in the centre of the room, a
lifeless body lay face up towards him.

The figure
remained there for a moment. His shoulders broad and still. His dark hair paused.

He snapped
his fingers.

The guard
behind him quickly hurried in. “Yes, Master?”

The guard
pulled it off his jacket and handed it over.

“Good
evening, team,” the Count rasped. “This is your Master speaking. It has come to
my attention that we have at least one intruder present. Her name is Haley
Watkins. You are to find her and bring her to me at once. Use everything at
your disposal. I will be waiting … on the roof…”

The radio
fell from his grasp.

The guard
hastily pulled it back up and attached it to his shirt.

“Madame
Nightshade’s coffin is in the underground dungeon,” the Count said. “Fetch
whoever you need to help. Her body is to be returned to it as soon as
possible.”

He turned
slowly and began to retrace his steps out of the room.

“Master?” the
guard said as he neared the doorway.

The Count
turned. “What is it?”

“Madame
Nightshade. She has something stuck in her hand.”

The Count
walked back to his daughter’s body. He knelt down and took her hand, unraveling
her fingers.

A USB drive
dropped to the floor.

“Which of you was it who
killed my beloved daughter, Arianne?”

The moment
had frozen.

Haley’s eyes
shifted towards Jason, aware there was no air in her lungs. No blood pumping
through her heart.

The rain
dived and fell through each of them, as though they too were made of water.
Their skin was bleached and numb. Their insides drowned to endless depths.

“Madame
Nightshade,” the Count answered. “She was my daughter, and she was found
murdered with a stake through her heart.”

“We don’t
know what you’re talking about,” Jason said. “It wasn’t us.”

“As I
thought. Your friend may go.”

“Unless you
wish to die.”

“You can’t
expect to just walk off and let you –”

In the blink
of an eye, a long metallic bar shot out of the Count’s hand. He used it like a
pole vault and ascended into the air above them. A second bar then shot out of
his other hand and he slammed it into Jason, knocking him off his feet, and
flying towards the shadowy edges of the roof.

The bars retracted
and the Count landed with a huge boom in front of her. He lashed out at her
with his claws, his lips twisted and salivating. Haley swung around maneuvering
herself from his attacks. She forced her heel towards his knee, trying to
disable him, but the Count was fast enough to catch it in time. He lifted her off
the ground and tossed her several feet into the air.

Haley landed
in a painful huddle, having little more than a moment to collect herself before
the vampire was on her once again.

As he lunged
for her throat, she jammed her fist into his stomach, which knocked him back.

She forced
herself across the wet ground and then made it back to her feet, just as he was
upon her again. She blocked his first strike, and then his second, but then his
claws broke free and seeped into her jugular. He ripped the flesh away, blood
spilling everywhere.

Haley looked
up, falling over again, the Count’s mouth wide open, reaching to bite her.

Then a dark
figure charged at him, forcing him away from her.

Haley
steadied herself and saw with some relief that Jason had made his way back onto
the roof.

Two heavy,
metal bars extended from the Count’s sleeves, and he swung them wildly at Jason
who was fighting him barehanded.

Haley put her
hand to her neck, trying to stem the flow of blood. She staggered over towards
them, as the fight continued, neither yet beaten.

The Count’s
bar then slammed into Jason knocking him back to the ground. The Count looked
at her with a sneering grin, as he raised the bar over Jason’s head, about to
strike.

“Argh!” Jason
roared before the Count got to him, charging his full body back into the
Count’s stomach.

The Count
stumbled back and fell off the roof’s edge.

He threw the
bar over as well.

“Come on,”
Haley said hurrying over to him. She grabbed his arm. “Let’s get out of here.”

Brock’s fingers lightly pressed
against the ladder’s edge. He was testing it for warmth. For vibrations. His
eyes shifted up towards the closed hatch, feeling the night beyond it.

At the sound
of panicked voices moving closer, Brock walked back out into the corridor where
he had fought and defeated the two men guarding the door. He looked left, and
then right. The coast was clear.

“Brock!”
Haley squealed, running at him from behind. “You’ve got to help us!”

Brock turned
eyeing up Haley, and the young man standing behind her.

“Our friends
on the floor might feel otherwise,” Brock said directing their attention to the
fallen guards. “I take it, it didn’t go too well up there.”

“He knows I
killed Madame Nightshade,” Haley answered. “She was apparently his daughter.”

“I pushed him
off the edge,” the man declared. “But I doubt we’ve seen the last of him.”

Brock’s gaze
lingered a moment, then he set forth to the left of the corridor. Haley quickly
followed behind him, and her companion reluctantly behind her.

The corridor
swung round to the right, and Brock went to a door near the end. He pressed his
ear beside it before trying the handle.

Brock looked
back and grabbed her wrist jolting her forward.

“They’re
being murdered,” she hissed. “They need our help.”

“It’s not
murder if you have consent,” Brock hissed back.

Haley tried
to pull away from him. “Yes it is!”

“Fucking keep
moving,” the man behind her scolded, pushing her forward into Brock.

One of the
vampires looked up from the bloody scene to stare back at them. “Come join us.
Don’t be shy.”

A woman
underneath him looked up, blood seeping from her lips. “Yes, please. Join us at
once.”

He moved
quickly towards a set of doors at the back of the room, which led out to a
balcony. After making sure Haley and her friend had passed through, Brock
directed them down a flight of stairs leading towards another balcony on the
floor below them.

At the second
floor balcony they ran towards the far end of the house where another set of
steps led down to the back-garden. Once they hit the lawn, they started
running.

Outsourced by R. J. Hillhouse
Man of Honor (Passion in Paradise Book 4) by Sarah O'Rourke
April at the Antique Alley by Bill McGrath
The Blood Bargain by Reeves, Macaela
The Driftless Area by Tom Drury
Blinded by Grace: Book Five of the Cotillion Ball series (Crimson Romance) by Lower, Becky
Curse of The Seventh Sword: The Gauntlet of Feona by Agu, Kelechi
Embers of the Raven: A Christmas Story from Greenland (The Christmas Raven Book 1) by Paton, Chris
The Sunfire by Mike Smith
A Different Alchemy by Chris Dietzel