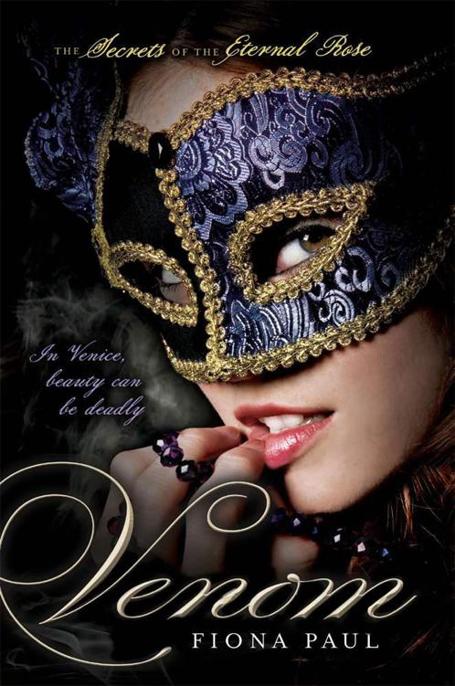 Copyright © 2012 by Paper Lantern Lit LLC. All rights reserved. This book, or parts thereof, may not be reproduced in any form without permission in writing from the publisher, Philomel Books, a division of Penguin Young Readers Group, 345 Hudson Street, New York, NY 10014. Philomel Books, Reg. U.S. Pat. & Tm. Off. The scanning, uploading and distribution of this book via the Internet or via any other means without the permission of the publisher is illegal and punishable by law. Please purchase only authorized electronic editions, and do not participate in or encourage electronic piracy of copyrighted materials. Your support of the author’s rights is appreciated. The publisher does not have any control over and does not assume any responsibility for author or third-party websites or their content. Published simultaneously in Canada. Printed in the United States of America.

Library of Congress Cataloging-in-Publication Data Paul, Fiona. Venom / Fiona Paul. p. cm.—(The secrets of the eternal rose ; bk. 1) Summary: In Renaissance Venice, orphaned Cassandra Caravello is one of the elite but feels trapped in the city of water until she stumbles upon a murdered woman and is drawn into a dangerous world of courtesans, graverobbers, and secret societies, guided by Falco, a mysterious and alluring artist. [1. Mystery and detective stories. 2. Social classes—Fiction. 3. Artists—Fiction. 4. Orphans—Fiction. 5. Love—Fiction. 6. Venice (Italy)—History—1508–1797—Fiction. 7. Italy—History—1559–1789—Fiction.] I. Title. PZ7.P278345Ven 2012

“It is human nature

to fear the dead,

but it is the living

who are capable of malice,

—THE BOOK OF THE ETERNAL ROSE

M
an falls down before the Angel of Death like a beast before the slaughterer.” The priest’s low voice echoed across the cavernous church. Thin shafts of sunlight cut paths through the stained-glass windows high above the altar.

Cass tugged at the neckline of her deep purple dress, wishing Siena hadn’t laced her stays so tightly. The stiff undergarments pressed down on her chest; she could hardly breathe. She looked over at Madalena. Mada’s expression was partially hidden beneath layers of black silk. Cass wondered if her friend was thinking the same thing she was: that the priest made it sound like this was an
execution,
not the funeral of a fourteen-year-old contessa from one of Venice’s most prominent families. Madalena dabbed at her kohl-lined eyes with a handkerchief.

Cass turned her gaze back to the priest. His robes were cinched with a belt of fraying rope, and his eyes were as sharp and dark as volcanic glass. He gestured expansively with his arms as he spoke, making his cloak billow from his shoulders like a pair of wings.

In front of the priest, a flimsily wrapped bundle lay on a stone
pedestal. Liviana. The young girl had spent her last few weeks in bed, coughing up blood, growing weaker and weaker. Gradually, her thin, pale figure had disappeared into her silken sheets.

Now her body—for that’s all it was, Cass had to keep reminding herself—lay shrouded in white burial wrappings and covered in flower petals.

After the service, Liviana would be carried out of the church, rowed through the canals of Venice, and then transported across the lagoon to tiny San Domenico Island. There, she would be entombed in the old family crypt within the church graveyard just next to where Cass lived.

Cass had caught a glimpse as the body was being wrapped and prepared for this final journey. Dressed in a pale pink gown that emphasized Livi’s porcelain skin and gaunt figure, the young blonde girl had looked more ghost than human. Livi’s mother had hung a loop of amethyst stones around her neck. The color would have perfectly highlighted the contessa’s light blue eyes.

Only now those eyes were closed. Forever.

Cass swallowed back a lump that rose suddenly and painfully in her throat. She had known Liviana for years—had spent many days playing in Livi’s family palazzo. And yet, she’d never felt close to her, never felt they could share secrets. Liviana had been angelic, and not just in her looks. She always behaved according to expectations, always spoke in a quiet murmur, was always docile and agreeable.

And that was precisely why Cass had never understood her.

Cass tried to behave; she really did. But sometimes the urge to
do
something completely overrode her education and upbringing. She didn’t
want
to break rules, but saw nothing wrong with climbing up the side of a building to get a better view of the busy Grand Canal, or
running her hand across the velvety forehead of one of the Doge’s horses as they paraded through the narrow streets during a festival. Impulsive, her aunt, Agnese, called her. Cass preferred to think of it as
living.

A loud sniffling attracted Cass’s attention. She looked around. Many of her friends were in attendance, clothed in mourning garb: girls in dresses dark as thunderclouds, boys in their finest velvet cloaks.

Madalena was now covering her mouth with her handkerchief. She let out another dainty sob. Mada was a year older than Cass and almost three years older than Liviana. She hadn’t even really been friends with Livi, but that didn’t matter. Mada felt everything intensely, and it made her all the more striking. It was as though the depth of her emotions had been written in the curve of her cheekbones and the darkness of her eyes.

Madalena’s fiancé, Marco, stood to Mada’s left, tracing soft circles on the small of her back with his fingertips. The tender gesture made Cass’s chest tighten. She couldn’t help but think of her own fiancé, Luca da Peraga—a boy she hadn’t even laid eyes on in the last three years, and had never liked much as a child. She wondered if Luca would ever touch her like that. Probably not.

Mada squeezed back and whispered, “It’s just…she’s so
good.
So sweet.
Was,
I mean. I can’t believe she’s—”

Her friend was dead and she was just beginning to live. If you could call it that.

Cass knew that the grief she was feeling—the hard, sharp pain behind her breastbone—was not only for Livi’s death, but for herself
as well. With Liviana gone, Cass was more alone than ever. She might as well be dead; her life was spread in front of her, a series of high walls and predetermined paths, rules, and expectations, all as narrow as the canals, as stifling as a coffin.

She glanced over at her aunt, Agnese, who stood stiffly to her right. Cass had moved into Agnese’s crumbling old villa five years ago, after her parents died. Her aunt had the money to maintain the estate properly, but seemed to relish the fact that the place was mimicking her own physical deterioration. Even some of the servants seemed just a tumble down the stairs away from disintegrating into dust. Plenty of people floated in and out of the villa—tutors and washerwomen, a near-constant flow of doctors and apothecaries—but no one that Cass could really
talk
to. Her lady’s maid, Siena, did her best, but she was so shy and obedient that Cass felt awkward speaking to her about anything but the most superficial subjects.

Her aunt swayed dangerously, and Cass grabbed Agnese’s elbow to keep her from toppling over.
No one is falling down before any angels today.
The old lady regained her balance, but Cass thought she detected a soft snuffling sound coming from beneath Agnese’s veil. She leaned in toward her aunt. Agnese was snoring. She’d fallen asleep standing up! Cass bit back the wild and inappropriate urge to laugh. Good thing the maids were generous with the starch in their dresses. It was likely the only thing keeping her aunt from tumbling to the floor in a heap.

The Lost World of the Kalahari by Laurens Van Der Post
Beautiful Bitch by Christina Lauren
Tyringham Park by Rosemary McLoughlin
Kethril by Carroll, John H.
Randal Telk and the 396 Steps to Sexual Bliss by Walter Knight, James Boedeker
The Rock Jockeys by Gary Paulsen
The Case of the Two Spies by Donald J. Sobol
What a Texas Girl Dreams (Crimson Romance) by Knight, Kristina
The Walls of the Universe by Paul Melko
Mission of Honor by Tom Clancy, Steve Pieczenik, Jeff Rovin