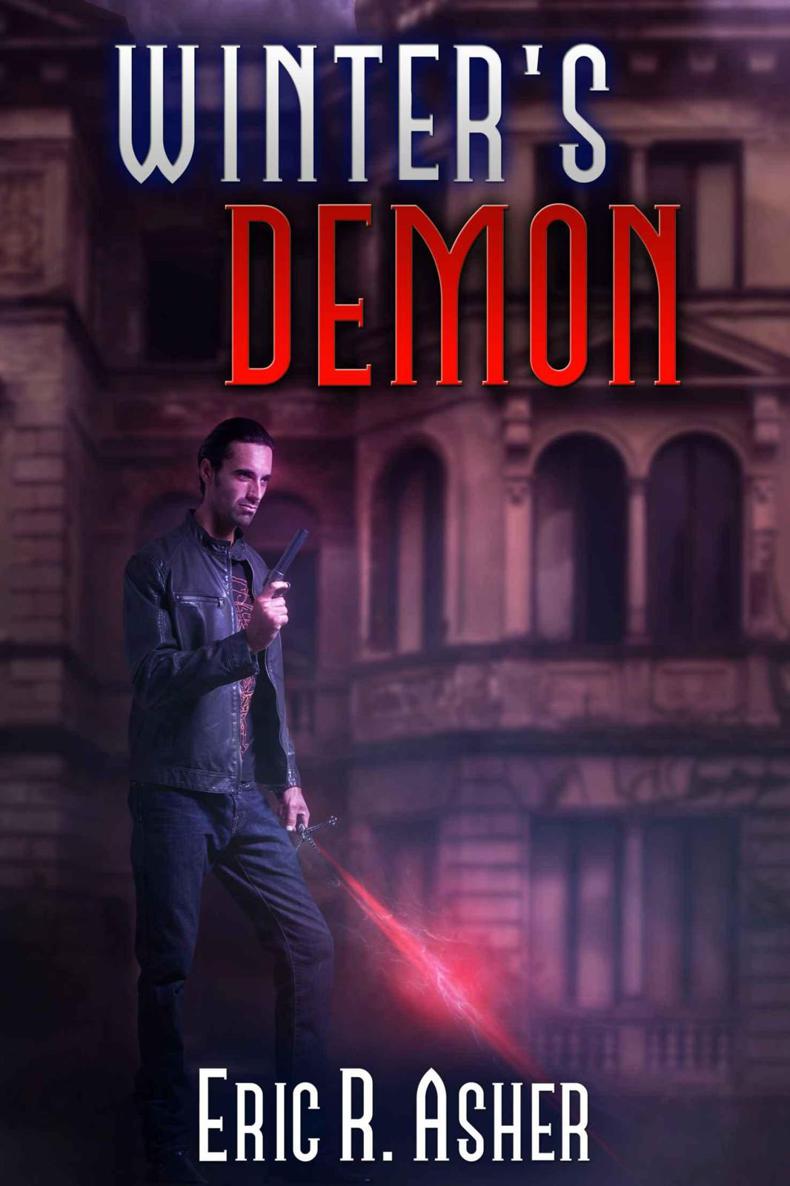 Wolves and the River of Stone

For the love of all things Worrible.

The past two years have been an amazing journey, and I can’t wait to see what the next two bring. It wouldn’t have been possible without the incredible support from the community, and all the readers who charged headlong into battle—and chimichangas—alongside Damian.

Thanks to the Critters.org workshop and their superb critiques.

Thank you to The Patrons of Death’s Door.

Thank you to my editor, Laura Matheson, who kindly reminded me characters ought not teleport around battlefields, unless of course, they’re actually teleporting.

T
here are days so great, you wish them to never end,

There are days gone so bad, you wish them never to have been,

And there are days when hell kicks in your front door.

“Damian!” Sam’s voice screeched over the phone. Adrenaline wracked my body. “They’re at our house, Mom and Dad’s, get here as—” Fear bled through my sister’s words before they were cut off by a scream and the roar of gunfire. The line went dead.

I didn’t think as I hurtled out the door and down the stairs. I strapped on my gun holster and the black body armor Hugh had given me, tossed my staff into the car, and tore out of the apartment complex, with little recollection of what I’d done to get there. It didn’t matter. Mom and Dad mattered. Sam mattered. I pushed the accelerator to the floor and my supercharged ’32 Ford Vicky screamed the rage and panic I felt.

I knew it should take almost thirty minutes to get to the house, but there was no way in hell it was taking that long. The highways and signals vanished in a blur of color and horns. Tires screeched as I slid around one car and slammed the accelerator to the floor. Nothing was going to keep me from my family. I should’ve been stopped by the cops. I wouldn’t have stopped for anything.

My heart plummeted as I bounced into the driveway of my parents’ old brick two-story home. Sam and I grew up there. Safe, cozy, it had been a calm haven in a crazy world. One of the Pit’s black SUVs was upside down on the lawn, trailing black smoke. I was sure it was Sam’s, but a glance told me she wasn’t in it. I turned to the house. The front door was in splinters. I focused my Sight as I ran toward the gaping wound in my childhood home and saw nothing but a cacophony of broken ghosts, a rainbow of residual power, and dead auras rising and falling like smoke. I had little doubt there were necromancers nearby.

Inside was so much worse. I cursed and slipped on a smear of black-green zombie goo, barely catching myself with the staff in my left hand. The smell tickled my gag reflex. I started breathing through my mouth. I heard something scrape in another room and the pepperbox holstered at my waist almost sprang into my right hand. Body parts littered the foyer. The walls were covered in scratches and tiny holes. My brain registered what the holes meant a second later—shotgun.

“Dad!” I yelled as I moved through the house. Some part of my brain screamed to stay quiet and hunt the bastard that dared to do this. The other part just wanted to find my family. Remnants of a battle were strewn all around me. The dining room to my right was obliterated. Fallen zombies were sprawled throughout the hall, trailing toward the kitchen. Beyond that was the den. I could just make out the blood and gore sprayed across the short dividing wall. “Mom! Sam!” My voice was shrill and my heart hammered as I plowed through the corpses. I passed another corpse with every step. Some were long dead, others had probably enjoyed dinner not long before. Something clattered in the kitchen. I took two quick hops over the shotgunned detritus and leveled the pepperbox at the man at the table.

“Holy shit.” My hand twitched before I lowered the barrel. I holstered my gun and leaned my staff against the wall. I flexed my fists to stop the shaking. “Dad.”

He sat at the kitchen table with a glass of whiskey, a smoking shotgun, and a pile of ammunition. The room was choked with exploded zombies and one very, very dead necromancer. Dad stared at me over the rim of his glass, threw back the last of the whiskey, and slammed it against the table so hard the glass cracked.

My dad shook his head and then closed his eyes. “I don’t know.”

“Philip did. It was Philip,” a voice croaked from the far corner, close to the patio door.

Philip. One of the worst humans I’d ever had the pleasure of meeting. Zola swore he hadn’t always been such a bastard, back when they’d been lovers during the Civil War, but everything I’d seen firsthand was a testament as to why dark necromancers deserved their reputation. He’d raised a demon, gotten Carter and Maggie killed, and forced me to unleash a forbidden soulart. I still felt stained by that act, and some part of me worried I’d follow his footsteps into madness.

“You okay?” Dad asked as he stood up, took a few shaky steps, and knelt down by the bloodied form. It took me a moment to realize he wasn’t asking me. He’d wiped some of the gore away from her eyes and smoothed her hair back before I even realized it was my sister.

“Sam! Jesus, shit, Sam … what the hell happened?” I slid across the blood and gore that surrounded her, stopping to kneel across from my dad. Her black hair was thick with human and zombie gore. I couldn’t tell whose blood was where and fresh panic clawed at my throat.

“Where’s Foster?” she said, reaching for my hand. “It hurts.” Her other hand tightened around her waist.

I was on the phone before she could say anything more. I needed Foster, Cara, Aideen … anyone. No one picked up at my shop. Sam shifted her arm and I could see a ragged tear across her stomach. I ground my teeth and looked away. “Dammit.” I dropped the phone into a pants pocket and took a deep breath. The wound might not be enough to kill her, but I couldn’t be sure. It wasn’t closing, and that was bad. Real bad.

I closed my eyes and pushed my aura out harder than I ever had before. The ghostly gray webwork of the city’s ley lines shimmered into my mind as my aura ran across them, searching for the only creature I’d learned how to speak to without words. I found him, eventually, curled up by a red panda in the zoo, and I formed my thoughts into a summoning. It probably wouldn’t have worked if the damn bear didn’t like me, but as soon as I made contact, Happy’s pale ghost was standing in my parents’ kitchen. Dad didn’t even jump. He may have blinked, but then he just shook his head and went back to the table.

“Sam’s hurt, we need Foster or Cara or…”

The bear nodded once, made a chortling whine, and vanished before I even finished rambling.

“Been practicing,” Sam said. She tried to smile but it fell off her face a moment later. I started rolling up my sleeve and she shook her head.

“Don’t make me make you bite me. You bloody well know I’ll do it.” Sam had some resistance to my necromancy since she’d fed off me before, but if I was really determined, I could still get her to do things. I would imagine that’s most siblings’ worst nightmare. I stuck my wrist in her face.

A tiny smile cracked the dried blood on her lips before she bit down.

I winced, but that was all. I looked up at Dad. He didn’t grimace, didn’t flinch. For all the times he’d complained about Sam’s “condition” and how there had to be a cure, he didn’t make a single comment. I nodded once and he returned it.

“Did they say anything?” I asked.

“Only that they wanted a blessing,” he said, “whatever the hell that means.”

Dad inclined his head as he pulled a clean glass from the cabinet and filled it with water.

“What are you wearing?” he asked.

“This?” I said as I pointed to my chest with my free arm.

Sam snorted and I yelped as she jerked her fangs to the side. “Sorry,” she mumbled into my arm, and went back to feeding.

I smiled at Sam and blew out a breath. “Hugh’s sense of humor.”

His right eyebrow cocked in question for a moment before laughter rumbled out of his gut. “The werewolves, ah, that’s good. Your mother likes Hugh. Seems like a good man.” His smile faded as he mentioned Mom.

“We’ll get her back,” I said. Sam’s grip on my arm tightened as I spoke. My mind trailed back to what Philip had done to Zola when he’d taken her last year. My teeth ground together. There was no sense in talking about that now.

I felt a surge in the ley lines before Cara stepped through a black whorl. It snapped out of existence as soon as Aideen followed behind her.

“Philip is after the nail,” Cara said as she flashed into her full size in a burst of fairy dust. Gray and white wings brushed the ceiling as she knelt beside Sam. “The Blessing of the Seelie Court.”

I closed my eyes and took a deep breath. “Shit.”

“You’re not sneezing,” Aideen said with a small frown.

“What about allergy medicine?” Dad asked, unable to see or hear the fairies.

Sam let go of my arm. “Hi, Mom,” she said. Her voice wasn’t much above a whisper.

“Christ, is she losing her mind?” Dad asked.

“I am not waiting for you to explain everything that happens here,” Cara said. “Aideen.”

“I hope your father is ready for our help,” Aideen said as she placed a tiny o-shaped stone in her hand. She whispered an incantation and the stone filled her palm with a thick, syrupy liquid. She slid the stone into a pouch on her belt and stepped toward my dad. She blew across the liquid in her hand, sending small bubbles floating into my dad’s eyes, granting him the Sight, showing him the Fae.

His eyes widened as he saw Aideen and Cara for the first time. Golden armor and fine white linens hung around them, framed by their gray and white Atlas moth wings. His hand scrambled for the edge of the table and he sat himself down on the chair with a thump. Sure, he’d met werewolves and vampires, but seeing a seven-foot fairy materialize with brilliant armor and enormous wings can be a bit jarring.

“It is a pleasure to meet you properly, Dimitry.” Cara said.

Loving and Loathing Vegas by Lex Chase
The Regency by Cynthia Harrod-Eagles
Behind the Shock Machine by Gina Perry
Valley of the Moon by Melanie Gideon
Ruthless Perfection (The Rosa Legacy #1) by Susie Warren
Proud to Serve Her (1 Night Stand Series) by Long, Heather
Against All Odds: The Most Amazing True Life Story You'll Ever Read by Paul Connolly
The Wedding Caper by Janice Thompson
A Tiger's Bounty by Terry Bolryder
Chelkash and Other Stories by Maxim Gorky