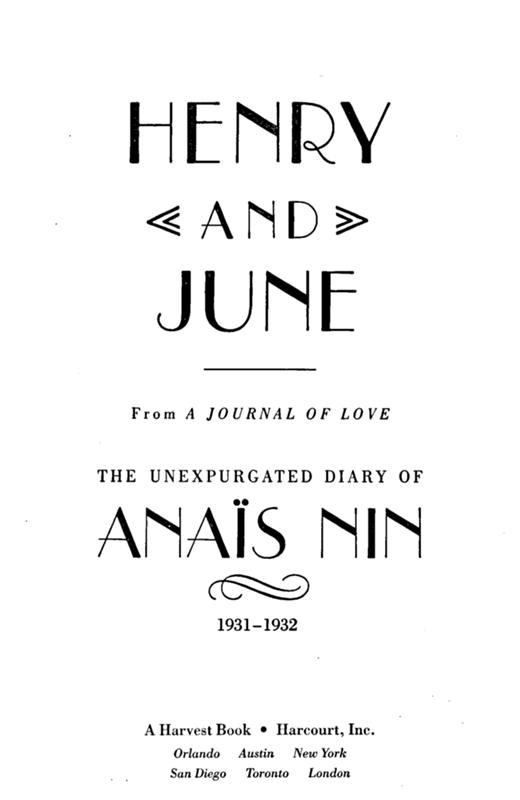 Requests for permission to make copies of any part of the work should be submitted online at
www.harcourt.com/contact
or mailed to the following address: Permissions Department, Harcourt, Inc., 6277 Sea Harbor Drive, Orlando, Florida 32887-6777.

Some of the material in this volume previously appeared in The Diary of Anaïs Nin, 1931-1934, edited by Gunther Stuhlmann, copyright © 1966 by Anaïs Nin. Reprinted by permission of Harcourt, Inc.

Grateful acknowledgment is made to Jean Sherman for her skillful translation of the passages in French.

Anaïs Nin knew very early that she would be a writer. At age seven she signed her stories "Anaïs Nin, Member of the French Academy." In her schoolgirl French she wrote numerous stories and plays that seemed to spring spontaneously from a most dramatic imagination, heightened by Anaïs's need to control her two younger brothers. This, she discovered, could only be accomplished by telling them endless stories and casting them in her theatrical productions.

In 1914, when she was eleven, she began the now-famous diary as a series of letters to her father, who had abandoned the family. She treated the diary as a confidante and wrote in it almost daily throughout her life—in French, until 1920; after that, in English. (The handwritten journals, comprising some 35,000 pages, are now in the Special Collections Department of U.C.L.A.) The discipline of daily writing without readers or censorship gave Anaïs, over the years, an ability to describe her emotions of the moment, an ability not fully realized until the period of
Henry and June,
which began in 1931.

She wrote continuously, both fiction and her diary, for another forty-five years. Anaïs the diarist and Anaïs the novelist carried on an uneasy relationship. She wrote in the diary in 1933: "My book [a novel] and my journal step on each other's feet constantly. I can neither divorce nor reconcile them. I play the traitor to both. I am more loyal to my journal, however. I will put pages of my journal into the book but never pages of the book into the journal, showing a human faithfulness to the human authenticity of the journal."

In the late twenties John Erskine told Anaïs that her diary contained her best writing, and she began to work on an idea that would allow her to publish "many pages" of it. At this time it could have been published complete; she had nothing to conceal. Thereafter she would devise a number of plans for publication: transforming the diary into fiction, doing it in diary form with fictitious names, or doing it in diary form with both fictitious and real names. But from 1932 on, when she began with Henry Miller what became a lifelong search for the perfect love, she realized she could never publish the diary as she wrote it without hurting her husband, Hugh Guiler, as well as others. She turned, instead, to publishing fiction.

By the mid-fifties, after her stories and novels had failed to bring her more than underground recognition, she thought of another, more workable method of publishing the diary without risk of injury to others. She decided to use real names and to simply edit out her personal life, her husband, and her lovers. After reading
Henry and June
, anyone familiar with the first published diary (1966) will realize what an ingenious accomplishment this was. Anaïs the diarist would probably have begun that initial diary at its actual beginning in 1914. But Anaïs the novelist, always dominant, chose to begin in 1931, her most interesting and dramatic period, when she had just met Henry and June Miller.

The present volume reexamines that period from a new perspective, releasing material deleted from the original diary and never before published. It was Anaïs's wish to have the full story told.

The text is taken from journals thirty-two through thirty-six, titled "June," "The Possessed," "Henry," "Apotheosis and Downfall," and "Journal of a Possessed," written from October 1931 to October 1932. It has been edited to focus on the story of Anaïs, Henry, and June. Material that appeared in
The Diary of Anaïs Nin, 1931—1934
has been deleted, for the most part, but some of it has been repeated here for the sake of giving a coherent account.

Anaïs's diary writing was at its most prolific during this period. In 1932 alone she completed six journals. These include her first experiments in erotic writing. The puritanical Catholic girl who could not bring herself to describe to her diary her salacious (to her innocent mind) experiences as a model was now faced with recording her awakening to passion. She was influenced, of course, by Henry Miller's style and vocabulary. Ultimately her own unique voice prevails, and her writing reflects her emotional and physical frenzy during this momentous year. She is never to be quite this wild again, although her sexual odyssey will continue for many years to come.

My cousin Eduardo came to Louveciennes yesterday. We talked for six hours. He reached the conclusion I had come to also: that I need an older mind, a father, a man stronger than me, a lover who will lead me in love, because all the rest is too much a self-created thing. The impetus to grow and live intensely is so powerful in me I cannot resist it. I will work, I will love my husband, but I will fulfill myself.

As we were talking, Eduardo suddenly began to tremble, and he took my hand. He said that I belonged to him from the very beginning; that an obstacle stood between us: his fear of impotence because at first I had aroused ideal love in him. He has suffered from the realization that we are both seeking an experience which we might have given to each other. It has seemed strange to me, too. The men I have wanted, I couldn't have. But I am determined to have an experience when it comes my way.

"Sensuality is a secret power in my body," I said to Eduardo. "Someday it will show, healthy and ample. Wait a while."

Or is this not the secret of the obstacle between us?—that his type is the large, buxom woman, heavy on the earth, while I will always be the virgin-prostitute, the perverse angel, the two-faced sinister and saintly woman.

For a whole week Hugo has come home very late, and I kept cheerful and unconcerned, as I had promised myself. Then on Friday he got worried and said, "Do you realize it is twenty minutes to eight, that I'm very late? Say something about it." And we both burst out laughing. He did not like my indifference.

On the other hand, our quarrels, when they come, seem harder and more emotional. Are all our emotions stronger now that we give vent to them? There is a desperation in our reconciliations, a new violence both in anger and in love. The problem of jealousy alone remains. It is the one obstacle to our complete freedom. I cannot even talk of my wish to go to a cabaret where we could dance with professional dancers.

I now call Hugo my "little magnate." He has a new private office the size of a studio. The entire bank building is magnificent and inspiring. I often wait for him in the conference room, where there are murals of New York as seen from an aeroplane, and I feel the power of New York reaching way over here. I do not criticize his work any more because such conflict kills him. We have both accepted the genius-banker as a reality, and the artist as a very vague possibility. However, psychology, being scientific thinking, has become a successful bridge between his banking and my writing. Such a bridge he can cross without much jolting.

It is true, as Hugo says, that I do my thinking and speculation in my journal and that he is only aware of the pain I can cause him when an incident happens. However, I am
his
journal. He can only think aloud with or through me. So Sunday morning he began to think aloud about the same things I had written in my journal, the need of orgies, of fulfillment in other directions. His need came to him in the middle of his own talk. He was wishing he could go to the Quatz Arts Ball. He was just as overwhelmed with surprise at himself as I was by the sudden alteration of his expression, the loosening of his mouth, the rising of instincts he had never before entirely brought to the surface.

Intellectually I expected this, but I crumbled. I felt an acute conflict between helping him to accept his own nature and preserving our love. While I asked his forgiveness for my weakness I sobbed. He was tender and desperately sorry—made wild promises which I did not accept. When I had exhausted my pain, we went out in the garden.

I offered him all kinds of solutions: one, to let me go away to Zurich to study and give him temporary freedom. We fully realized we could not bear to meet our new experiences under each other's eyes. Another, to let him live in Paris for a while, and I would stay at Louveciennes and tell Mother he was traveling. All I asked for was time and distance between us to help me face the life we were throwing ourselves into.

He refused. He said he could not bear my absence just now. We had simply made a mistake; we had progressed too quickly. We had aroused problems we were not physically able to face. He was worn out, almost ill, and so was I.

We want to enjoy our new closeness for a while, live entirely in the present, postpone the other issues. We only ask each other for time to become reasonable again, to accept ourselves and the new conditions.

"No," he said. "The life of freed instincts is composed of layers. The first layer leads to the second, the second to the third and so on. It leads ultimately to abnormal pleasures." How Hugo and I could preserve our love in this freeing of the instincts he did not know. Physical experiences, lacking the joys of love, depend on twists and perversions for pleasure. Abnormal pleasures kill the taste for normal ones.

All this, Hugo and I knew. Last night when we talked he swore that he desired no one but me. I am in love with him, too, and so we let the issue lie in the background. Yet the menace of those wayward instincts is there, inside of our very love.

We have never been as happy or as miserable. Our quarrels are portentous, tremendous, violent. We are both wrathful to the point of madness; we desire death. My face is ravaged by tears, the veins on my temple swell. Hugo's mouth trem bles. One cry from me brings him suddenly into my arms, sobbing. And then he desires me physically. We cry and kiss and come at the same moment. And the next moment we analyze and talk rationally. It is like the life of the Russians in
The Idiot.
It is hysteria. In cooler moments I wonder at the extravagance of our feelings. Dullness and peace are forever over.