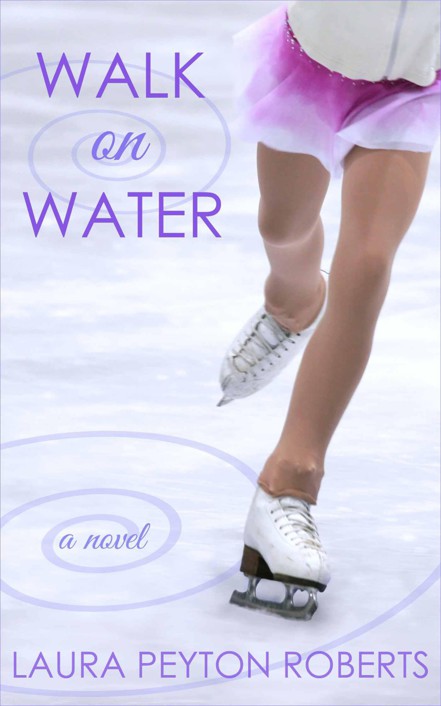 This is a work of fiction. Names, characters, places, and incidents either are the products of the author’s imagination or are used fictitiously. Any resemblance to actual persons, living or dead, events, or locales is entirely coincidental.

All rights reserved under International and Pan-American Copyright Conventions. By payment of the required fees, you have been granted the non-exclusive, non-transferable right to access and read the text of this e-book on screen. No part of this text may be copied, reproduced, distributed, transmitted, broadcast, recorded, adapted, performed, uploaded, downloaded, decompiled, reverse engineered, or stored in an information retrieval system, in any form or by any means now known or invented hereafter, without the express prior written permission of the author.

For my parents,
with love.

“Just open it!” Kaitlin glanced at the strip of empty parking lot behind her and giggled nervously. The pair of them weren’t likely to be caught at that hour, even less likely to be prosecuted, but that in no way killed the thrill of breaking in.

She buried a hand in his shaggy hair, turning his face toward hers. “Or maybe you’re just still half blind.”

Blake smiled like a drunken angel. “No ‘maybe’ about it, Mrs. Walker.”

“Mr. Walker,” she returned, leaning into him. “Come on. Mom’ll blow a vein if we don’t pick up Lexa soon.”

“She likes you,” Kaitlin lied as her newly twenty-one-year-old husband returned to picking the lock. “She’s just . . . you know.”

“Blake!” Kaitlin smacked his parka. “Mom only wants what’s best for me. She loves me. She adores Lexa. She’ll learn to appreciate you again. Someday.”

“I’m not sure I’ll survive the thrill.” The door opened suddenly, pitching him headfirst into the empty building. Regaining his footing, he opened the rink’s back door wide. Ashtabula Ice was slightly less dark inside than out, illuminated by a few low-watt security lights. “Ladies and gentlemen, give it up for
Mrs
. Kaitlin Walker, former World and
two
-time Pairs Champion of the United States!” He emulated a cheering crowd, waving his arms overhead.

“Gold medals, baby!” Kaitlin crowed, flashing hers from beneath her jacket. Its ribbon made a red-white-and-blue slash across her pale throat, tangling with the gold cross and skate pendants she never took off. “Watch out, world! Walker and Walker are back!”

Kaitlin laughed. “She’ll only be a minor for seventeen more years.”

He tucked her head beneath his chin and inhaled deeply. Her hair still smelled of competition shellac, the only lasting way to tame the blond tendrils around her face. “I love you so much, Kaitlin. You know that, right?”

He laughed, not letting go. “Says the girl who was dancing on tables a couple of hours ago.”

She kissed him, tasting strawberries and vodka. “I love you too,” she said, suddenly serious. “You’re my whole world, you and Lexa.” She kissed him again, then pushed off his chest with both hands. “You, Lexa, and those big-ass Olympic gold medals we’re going to win!”

“They’ll sure beat the hell out of the rest of our décor,” he said, picturing framed Olympic medals above their thrift store couch. Not that the couch wouldn’t be history when he and Kaitlin turned pro after next year’s Olympics. There wasn’t any question now of Walker and Walker medaling there, and the money could only follow. Young and newly married with the world’s cutest baby girl, winning even the bronze medal would make them an advertiser’s dream. Their new manager was already talking about summer tours, cereal boxes, TV specials, and a dozen other ways for Blake to give his wife the life she’d once known and their daughter the one she deserved. Missing a season of competition during Kaitlin’s pregnancy had prevented them from defending their titles—and caused a lot of people to write them off—but Blake and Kaitlin hadn’t just come out back on top after a couple of tough years, they’d emerged stronger than ever.

Kaitlin laughed. “You wish. And no triples, either. That last margarita would have sat better on an empty stomach.”

He ran his hands inside her parka, over her flat belly. “One plate of nachos won’t kill you.” Between his one-handed lifts, her unforgiving competition costumes, and, most recently, the baby, Kaitlin had been dieting half her life. A splurge could only do her good.

She shrugged off her bright pink coat and dropped it to the floor. Underneath she still had on the cami and yoga pants she’d flown home in. They’d driven directly from Cleveland International to an Ashtabula restaurant to celebrate this second nationals win, the free drinks flowing like water at the flash of a gold medal. Blake finally had a valid ID, and in all the partying and confusion, no one had thought to card Kaitlin. He smiled now at the memory as she left him and her parka behind and dashed across the rubber tiles. Catching up at their open locker, he sat beside her to lace up.

“Do you want to risk the PA?” she asked, pulling on old practice skates battered by hundreds of hours of use. “Or would that be going too far?”

He laughed. “
Could
we go too far at this point?”

Letting himself into the manager’s office, Blake flipped on the lights over the ice in addition to the sound system. Through condensation-streaked interior windows he saw Kaitlin already warming up. Her strokes sliced the glassy surface, leaving tracks he’d have to erase later, but one of his part-time jobs included driving the rink’s Zamboni. The music for their competition programs was right at the front of the drawer. Ignoring those cassettes, he popped in a favorite mix tape.

“Come on in. The water’s fine,” Kaitlin greeted him as he placed his blade guards beside hers on the rail topping the boards. Her gold medal lay there as well. He took off his own and lined them up.

“Ladies and gentlemen!” Kaitlin cried, echoing his earlier announcement. “
Two
-time U.S. Pairs Champion . . . Blake ‘Blades’ Walker!” Skating to him, she held out both fists, initiating the ritual they engaged in before every competition. “Walk on water, babe.”

“Walk on water,” he returned, grinning as his fists bumped down on hers. Kaitlin skated off and Blake stepped onto the ice. The blades that had earned him his nickname flashed, gathering speed.

Blake had been a skater for as long as he could remember. His friends had dubbed him Blades before his twelfth birthday, when he was still skating singles and dominating his age group. But competing at the higher levels cost more than Blake’s working-class parents could afford, and after their divorce they’d argued even more bitterly about the mounting expenses. Blake had been certain they’d make him quit, so when Beth Lennox had offered to pay his skating expenses on condition that he partner her daughter, Blake had switched to pairs and never looked back. He’d been thirteen then, Kaitlin only eleven, but sharing his glory with little Kaitlin Lennox had seemed like a price worth paying for a world-class coach, unlimited ice time, and new skates twice a year. What Blake hadn’t foreseen was that his delicate-looking new partner would turn out to have all the competitive drive, fearlessness, and strength of will that he possessed himself.

Blake stroked front crossovers through the turn and glided up behind Kaitlin, catching her by the waist as their bodies drew even. They continued forward in the perfect sync that had become second nature. Flawless unity was their hallmark, the aspect of their performance that struck both awe and angst into every other team. Walker and Walker
breathed
in unison. The rumor around the circuit was that their hearts beat at the same time.

“Hello, you,” Kaitlin said, tilting up her face to smile at him.

Blake’s gaze skipped from her mouth to her nose to her eyes, every part of her more beautiful to him than he had ever imagined another human being could be. “Hello, Mrs. Walker,” he murmured.

Their bodies picked up the conversation, stepping effortlessly through footwork, swooping through turns. He molded himself to her through a spiral sequence and felt her press back against him, no audience watching now, as intimate as sex. They carved familiar patterns, the swish of their blades lost beneath the swelling music and the blood rushing in their ears.

He jumped her on a high note—throw double Salchow, easy stuff. Kaitlin’s smile as she landed reflected all the joy he was feeling too, their emotions as in sync as their bodies. Blake supported her easily as she launched herself into a lift. One smooth press and she was balanced overhead in his strong hands, her slender arms and neck arched gracefully as together they looped across the ice, traveling the length of the rink.

Five yards short of the dismount, Blake’s blade caught an edge, jerking him off balance. His hands slipped awkwardly. Kaitlin’s legs flailed as her body tilted above his. Their course shifted abruptly and Blake’s knees slammed the boards, bouncing him back toward center ice. Kaitlin plummeted down past his face head-first. Her jaw hit the rail with a sickening crack, snapping her head sideways before she slid, motionless, to the ice.

Blake dropped to his knees beside her. Kaitlin’s eyes were open. Her neck was bent at a sickening angle.

Kaitlin didn’t move. Her unfocused eyes gazed past him into the dripping rafters.

“Kaitlin?” He reached a trembling hand to the pulse point at her throat, felt nothing but the wrongness of that angle. “Kaitlin!”

His eyes rose to the empty stands beyond the boards. There was no one there to help him. He had to get to the phone, the car, the hospital. He had to move, had to hurry.

“Kaitlin?” Kaitlin’s head lolled brokenly as he gathered her toward him. Her eyes stared into an unseen distance, already glazing over, and Blake understood there would be no help.

With a heave that turned him inside out, he vomited next to his teenage wife’s body.

A Woman of Substance by Barbara Taylor Bradford
Duty and Desire by Pamela Aidan
The Impact of You by Kendall Ryan
Beyond the Shroud of the Universe by Chris Kennedy
Teacher's Pet by Ellerbeck, Shelley
Starkissed by Gabrielson , Brynna
Dirty Tackle: A Football Romance by King,Imani
Ahriman: Exile by John French
The Maestro's Apprentice by Rhonda Leigh Jones
Hunter's Games by James P. Sumner