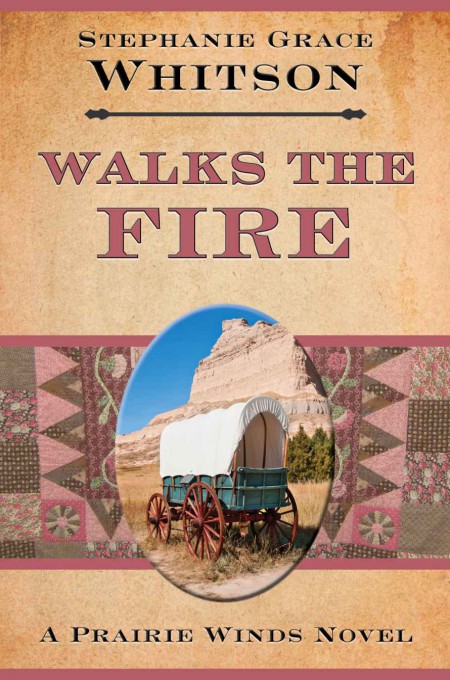 The Story Goes On…

The
Prairie Winds Novels
are available in all popular eBook formats

The story continues in
The Keepsake Legacies Novels

My leader, my example, my beloved, my friend

LisBeth stared in disbelief
at the patchwork that spilled out of her mother’s lap onto the floor. She studied the hands that held it, noticing for the first time how time had worn them. Deep wrinkles accented every swollen knuckle. What had once been a sprinkling of freckles had become dark splotches. “Age spots,” Mama called them. The hands that had always gone about their work with deliberate calm now twitched nervously as they clutched the quilt. Finally, LisBeth looked into the eyes of the woman who had borne her.

Jesse was no longer just Mama. With the telling of the quilt she had become a woman who had loved and hurt and kept her faith and grown and triumphed in her own, quiet way.

The silence became too heavy. Jesse broke it “So, LisBeth, that’s how you came to be.” As she spoke, Jesse’s eyes searched her daughter’s face anxiously.

My heart’s desire and prayer to God… is, that they might be saved.
—
Romans 10:1

He had seen cholera
decimate the ranks of the fur train in Bellevue and had endured the taunts of the rough-hewn mountain men. He had struggled to stay astride his mule when illness made him too weak to mount without help. His pulse had quickened at the sight of a galloping party of Indians closing in upon the train from the west—and then slowed again when they shot their guns into the air to show their friendly intentions.

He had doctored and suffered and hungered and prayed. But none of these things had prepared Marcus Whitman for the sight of an Indian camp boasting 2,000 inhabitants. The village stretched for miles along the Laramie River, just above where the river emptied into the Platte. The meeting of the two rivers was a natural crossroads where fur traders had built Fort Laramie. The fur train was to stop here on its journey to the great rendezvous site on the Green River.

Whitman and his fellow missionary, the Reverend Samuel Parker, had joined the fur train in Bellevue, Nebraska, and would travel with it to their destination in Oregon. They had heard that the Indians in that land wished to know about the white man’s God. At the rendezvous they would have opportunity to investigate the veracity of those rumors. Then, they would journey west to carry the gospel, “even to the ends of the earth.”

The arrival of the fur train caused a great commotion in the Lakota village. Children tumbled out of tepees, shrieking greetings and questions. Dogs joined in the tumultuous escort, yapping at the heels of Whitman’s cantankerous mule until the beast lashed out in fury. Reaching the fort, Whitman dismounted carefully, thankful for his returning strength.

Hungrily he drank in every detail of the scene before him, filled with compassion for the vast nation of unreached souls. But when whisky kegs were brought out later and drunkenness prevailed, the missionary’s compassion was mixed with disgust. As night fell, the Lakota entertained their white visitors with a buffalo dance, leaping high in the firelight, reeling in drunken ecstasy.

As Whitman turned to retreat to the privacy of his own tent, his attention was drawn to one handsome warrior standing at the edge of the firelight. Huge brass rings hung from each of the warrior’s ears, and eagle feathers dangled from his thick dark braids. A string of bear claws adorned the muscular neck.

Whitman wondered at the Indian’s reluctance to join his friends in their wild celebration. He studied the face. Intelligent dark eyes squinted slightly, studying every movement of the dancers. Resting one hand on the shoulder of a beautiful young squaw at his side, the Indian gestured and whispered. The corners of his well-formed mouth turned up in a half smile. A few wrinkles across the high forehead and at the corners of his eyes made him appear older than the woman. Still, she looked up at him expectantly, clearly enjoying his attentions.

As Whitman watched, the Indian turned sideways and took a step toward his woman. Shadows from the firelight accented his square jaw and cleft chin. Suddenly, the half-smile disappeared. The brave clenched his jaw and jerked his head sideways, looking away from the fire. His hand dropped from the woman’s shoulder to his side. He gripped the fringe along the side of one legging.

Fur traders and natives alike met the dawn with groans and complaints about the effects of the night’s celebration. Still, they packed up to continue to the Green River rendezvous, chiding one another for their behavior the night before and shouting anecdotes from last year’s rendezvous to encourage one another to travel quickly. Whitman was left with unanswered questions about the injured warrior and his lovely companion.

Twelve days later the fur train and the missionaries arrived at the Green River. The traders set up shelters to show the fabric, ribbon, beads, knives, and axes they had packed so far to trade for skins.

Whitman had been repulsed by the drunken display at Fort Laramie, but the debauchery at the rendezvous left him speechless. Indians, mountain men, and traders drank and feasted and shouted and fought until they passed out. They slept only to begin the cycle again as soon as they awoke.

Late one evening as Whitman sat straining to read by his dying campfire, a young boy beckoned him to follow him across the camp to another fire. There, waiting for the doctor, sat a mountain man and a few other traders. The man did not rise, but drawled gruffly, “Boy here says yer a doctor.”

Lifting his fringed shirt and turning his back to the campfire, the man said, “See that lump on the shoulder? Been carryin’ that near three years now. Blackfoot arrowhead. Hurts like the devil. Think you can dig ’er out?”

The doctor examined the area. “I can remove it, but there is no anesthetic…”

The man lifted a flask at his side and took a long draught. “Got my anesthetic right here, doc. Dig ’er out.”