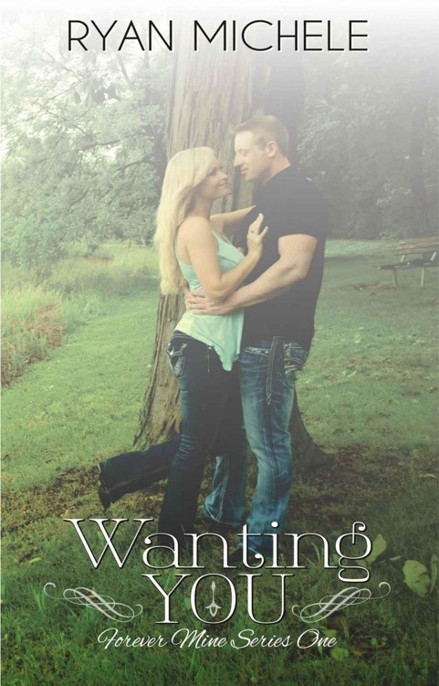 Annotation
Savannah 'Vann' Kelly
knows the pain that love can bring, whether from family or a love lost. Being ripped from her home and forced to leave behind her boyfriend, has caused an ache she's unsure will ever heal.
Five years later, Vann is back. While her day job is kept secret from most, the threat it poses throws her entire world off balance, putting her and those closest to her in danger.
Deke Sullivan
’s life has been in a tailspin ever since his brother’s death. Everyone in his life has either betrayed or left him, making him who he is today. But behind his tough persona is still the man that craves the woman who left him all those years ago. One look into those blue-gray eyes sends his heart into overdrive, anger pulsating through him.
Can Deke move past the hurt? Will what became of Vann's life after she left cause greater tragedy? Can first love prevail?
Wanting You
Forever Mine - 1
by
Ryan Michele

To my husband: Thank you for your support and love. And I promise, you will always get the smallest piece of pizza.

1
Vann
The instant my car passed over the Alabama state line, I rolled the windows down in my jeep. I needed to feel the warmth of the air. It wasn’t that California wasn’t nice; it just didn’t have the same warmth as Alabama did for me. This was home. This was where I was going to get back all those years that had been lost and reclaim my life. I would get them back.
Cranking up my iPod, I began to tune out all the wayward thoughts swirling in my head. I knew I shouldn’t have left my mom the way I did, but it was necessary. Telling her the day I was leaving, that I was going home, was abrupt, but I knew she would try to talk me out of it. I wasn’t having any of it. It was past time to return home to my friends and the life that was ripped away from me.
Kinsley and Sawyer had been my best friends since kindergarten. We grew up totally inseparable. We were always there for each other especially when things got rough in all our lives. Not to mention all the shit that happened at school. They were the only two who I could depend on then and now. I could still vividly remember when they thrusted themselves into my life.

“Stop!” I yelled at the boy pulling my pigtails. He had been mean to me all morning. He even pulled my chair out as I was sitting down, causing me to fall. He laughed at me. Now … he won’t go away.
“Aww, are you gonna cry?”
Yes. I was. I wanted him to leave me alone.
“Hey! Get away from her!” A little girl’s voice caught his attention as he stopped pulling.
“You wanna be next?” he barked.
The little girl with light brown hair stood up close to him. “Try it, and I’ll show you what my brother taught me to do to boys who are mean to me.”
“What? A little thing like you?” He laughed.
The little girl lifted her leg, kneeing the boy. The boy grabbed in-between his legs and fell to the ground, yelling as he went down.
“Come on.” The two little girls pulled me away.
“Hi, what’s your name?” the small girl with long blonde hair asked me, holding hands with another little girl with light brown hair. I didn’t want to answer her or look at them. I just wanted to find my mommy. Why did she leave me in this place? I didn’t want to be at this weird building with the
Cat in the Hat
on the walls. I didn’t like it. “Come on. What’s your name?” she insisted.
Looking around, I saw no one and decided to speak for the first time all day, “I’m Savannah.” My voice was so quiet I really was hoping they wouldn’t hear and just go away.
“Hi. I’m Sawyer and this is Kinsley. We’re friends!” The little blonde girl, Sawyer, jumped up and down. I thought maybe she saw a bug, but when I looked on the ground, there was nothing but crumbs and food wrappers.
“I don’t have friends.” I’d spent all morning keeping to myself. I didn’t know the things the other kids were talking about like DS or XBOX. I had never heard of it, so I just stayed back and listened.
“You do now,” Sawyer said, looking at Kinsley.
“Come on!” Kinsley demanded. My heart began to race when they each grabbed one of my arms pulling me out to the playground.

Winter Passing by Cindy Martinusen Coloma
Aurator, The by KROPF, M.A.
All She Ever Wanted by Barbara Freethy
Assault on the Empress by Jerry Ahern
The Murderer's Daughters by Randy Susan Meyers
Homeland: Carrie's Run: A Homeland Novel by Kaplan, Andrew
KNIGHT OF SECRETS (Knights of Passion Series 2) by North, Evie
The Rembrandt Secret by Alex Connor
Blind Witness by Knight, Alysia S.
The Nicholas Feast by Pat McIntosh