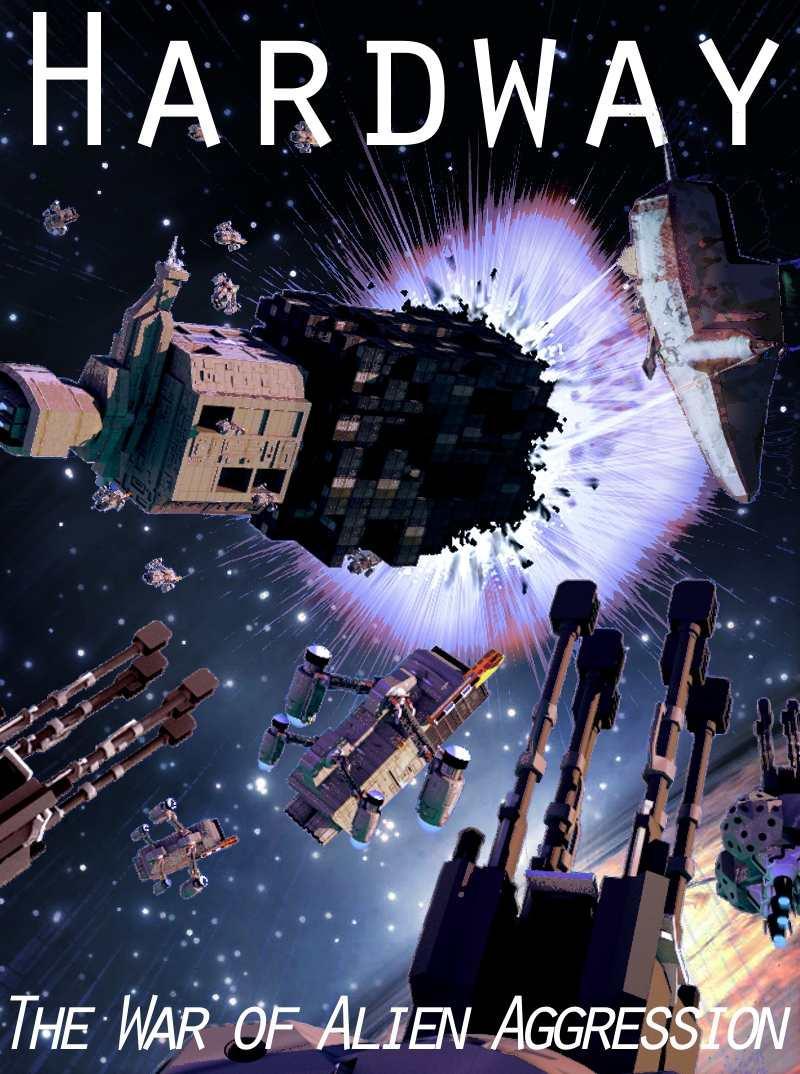 Many thanks to Tom Robidoux for his editorial input.

Thanks to 'Blue Scar' D. for his consulting role.

Thank you to Jimmy Robidoux and the 182nd Airborne.

The author would like to express his appreciation to the New England Air Museum, USS Nautilus (SSN-571), and USS Massachusetts (BB-59),  F-15.net, /r/WarshipPorn and her sister subreddit, /r/Warships.

Five small shuttles with spoofed transponders lurked in Jupiter's shadow. As Mickey Wells and Harry Cozen arrived, she picked up reactor emissions from the other craft. Two were Staas Company longboats like theirs and two were from the UN fleet. Mickey only saw them because she knew where to look. This far out of the lanes nobody else would notice.

"Wait for me here." Cozen put on his helmet and made for the airlock.

"I don't think so, Mr. Cozen," Mickey said, rising from the pilot's seat. "You pay me to keep you alive."

Over local suit comms, the rasp and gravel of his voice almost sounded like static. "These are nervous and powerful people. Seeing you might scare them. Then, you'd have to kill them." He went out the airlock alone.

Mickey didn't know who he met out there or what they talked about, but just over a kilometer from the longboat, she saw the heat bleeding from five exosuits: Cozen and two women and two other men, huddled close, probably using secure, pulsed lasers for comms and data transfer.

The meeting lasted only minutes. Mickey watched the group separate and jet back to their blacked-out boats and depart, one by one. Cozen was the last to come in and when he did, he looked pale. His personal vessel,
Arbitrage,
was only 2 million Ks out, so Mickey set the NAV to return on autopilot and went to the rear. If anything existed that could frighten a man as powerful and ethically unburdened as Staas Company VP Harry Cozen, then Mickey needed to know about it immediately.

He floated above the wet bar in his exosuit. His helmet was somewhere on the other side of the compartment and his silver hair drifted around his head like a halo.

The audible impact on the top of the longboat made them both look up. It was a yielding thud, like whatever had hit the hull was soft. There aren't many soft things in space.

Mickey said, "Mr. Cozen, put your helmet back on, please." She found her own helmet over the co-pilot's seat. As she checked the NAV console, Cozen's voice growled over comms.

"Passive LiDAR contacts? Anything on IR...talk to me."

Mickey tried to she tried to say, "We're not alone," but she never got the words out. Her helmet's visor went opaque to protect her eyes from a blinding flash, and 3ms later, the shock wave threw her forward into the cockpit's diamond-pane canopy.

Her helmet impacted hardest. It was well-padded, but the inside of Mickey's skull wasn't. That's what her brain hit when her helmet and skull stopped moving. After the flash behind her eyes, it took at least five seconds to claw her way back to consciousness. When she finally did, the longboat's interior lights were out. In her suit-lights' glow she saw a meter-wide hole had been blown in the top of the compartment, clean through the outer hull. And she saw Harry Cozen with his back pressed against the canopy, firing her sidearm at something in the rear of the boat. Ice crystals vaporized in the weapon's focused x-ray beam and drew a burning, ruby line to his target.

At first, from what she saw, Mickey thought he was firing at some insulation and hose and tubing whipping about from the ruptured environmental systems. Then, in a horrified blink, she recognized them as the innumerable appendages of a wounded and fleeing thing, alien and impossible, grotesquely skinny and long with limbs like meters of garden hose. The last bit of it to disappear past the lip of the hull breach was fat and tubular and metal. It had a wide hole in the end of it like a barrel. It was as alien as the rest of it, but Mickey knew a weapon when she saw one.

Cozen said "I hit it." He was as calm as an ice-water lake. "I drilled that thing in its center body mass."

Mickey took her gun back. She searched outside the hull, but she found nothing except the meter-wide hole. Mickey Wells had blown through plenty of walls and bulkheads in her career and she knew the blast pattern left by most kinds of breaching charges. This one didn't look like anything she'd ever seen before. It was as if the hull had been disintegrated on the molecular level in the instant before a more conventional explosive charge detonated and made the shock wave in the longboat's atmo.

When Mickey came back in through the hull breach, she said, "Mr. Cozen, if I'm going to do the job you hired me to do, then I'm going to need to know exactly wha-"

He cut her off by putting his finger to the visor of his helmet so it crossed over his thin lips. Cozen shook his head. His narrowing eyes told Mickey not to utter another word until it was safe.

Once aboard
Arbitrage
, Harry Cozen brought Mickey to the dimmest, coldest, and dampest spot on his ship
–
between the inner and outer hulls, below the reactor, where condensate formed in globs as big as her fist. The two of them floated in zero-gee while he spread a constellation of little anti-surveillance devices around them. He switched them on, and their vibrations shimmered the water's surface until it was silver and opaque.

"We can talk now," he said. "Listen carefully." He told Mickey he knew with certainty that humanity was not alone. "War is coming," he said, "and I have a plan." She knew Cozen only told her about the parts she needed to know because he said nobody could ever know the entirety of what they'd done.

He said they'd need a bigger ship and an inside man – a good one. Mickey told him she knew a good man. Nobody would suspect a connection because she hadn't seen him for twenty years, not since he was eight years old. "His name is Lt. Ram Devlin. He's aboard the carrier
Hardway
."

"SCS
Hardway
..," he said, weighing the ship in his mind. "She carries 50-meter mining junks that work the asteroid belt and the Jupiter Trojans."

Cozen pulled out a matchbox computer and gestured until he called up a ghostly, half-meter-long projection of the Staas Company carrier
Hardway
to float between the hulls with them. The front 400 meters of the ship had been stacked wide and deep with thousands of ore containers. Set behind them was the launch bay section, the command tower and sub-tower, a Hab module for the hundreds of miners, pilots, and crew, and the engineering module with five, jumbo-sized reactors to feed her massive Novalift engines.

"Modular build," Cozen said, "prefab, standardized sections set along a tensegrity spine. We can get rid of the ore containers and double her launch bays. Add railgun batteries and launch tubes for Mk3 warspites... Yes." Cozen nodded. "
Hardway
is exactly what I need."

Ram Devlin and Dana Sellis had scheduled their breaks so they could have three hours alone. He thought Dana fell asleep with him on his padded shelf of a bunk, but she was wide awake. She saw
Mohegan
before he did.

"Ram." She shook him and peered across his dim quarters and out the small porthole. "What the hell is that? Out there." Her arm shot straight out from her body.

Raw sunlight bathed it as it spun. Ram's eye picked out the canopy of the offset cockpit module, the four outboard nacelles, and the ore containers slung under bow, up front. Dana said, "That's a mining junk." The 50-meter craft shot past
Hardway
so close you could see the patch-welding. It was
Mohegan
. She and her crew of ten had been overdue and missing for days.

"No lights," Ram said. "Their engines were all dark, too." However it got back to the barn, that junk wasn't stopping. It was now headed up and out of the ecliptic, on a course to nowhere.

Men and women shipped out on
Hardway
to mine the belt and the Jupiter Trojans. They came to hit a jackpot in gold or iridium, osmium or palladium or one of the really rare elements. The payoffs for striking it rich on a mother-lode could be huge, enough to live on for a lifetime. But it was a dangerous business. No carrier had ever come back with all hands.

"No alarm..." Dana said. "Why aren't I hearing an alarm?" The whole carrier should have heard a call to rescue stations. "Who's got the goddam chair right now?"

They took the lift up from the sub-tower to the top of the carrier's command tower where Bergano had the bridge. Bergano was another company man, another Staas Academy grad putting in his time out in the black, but he and Bergano were nothing alike.

Ram said, "Why didn't you sound an alarm?" Dana asked the same question at a higher volume and with added profanity. Once they got to the center of the bridge and stood next to the command chair, Bergano couldn't ignore them anymore.

"This isn't your bloody watch, Devlin.
I've
got the bridge."

A projection of
Hardway
floated in the air above the AT Controller's console showing the carrier and her currently deployed mining junks. A red arrow blinked behind
Hardway,
representing the junk that had just shot past, out of control. "
Mohegan,
" Lt. Wei said as he nodded his head up at her.

"Why haven't you ordered a rescue? They're getting further away by the second."

Bergano sighed and tapped at the arm of the command chair to project a still image of
Mohegan
into the air in front of them. "Got a good look as it passed close," Bergano said. "Temp inside is about 5 degrees Kelvin. Got corpses in the pilots' seats. The heat has been out on that junk for days...
Mohegan
rolled snake-eyes. They're all dead."

"You don't know that for sure," Dana said.

"Company regulations state that if the crew is dead, then we allow an ISTSB approved salvage, recovery, and incident investigation vessel to handle it from here." Bergano looked so damn comfortable with it.

"Unauthorized opening of launch bay 6," Lt. Wei announced from the AT console. "No departures are scheduled for the next hour."

"It's
Gold Coast,
" Bergano said. That was Asa Biko's boat. Biko was the Teamster union rep for everyone on
Hardway
but the company officers. Ram wasn't surprised to see him going out after
Mohegan
. Bergano tapped at the terminal set in the command chair's arm. "I'm overriding the launch bay doors..." The repeated error beeps let everyone on the bridge know it wasn't working. "Dammit!"

Ram said, "Someone down there is jock-blocking you."

Bergano punched furiously at the controls, but it didn't matter. "They're tying up the input buffers with fake commands," he said. "My inputs can't get past the queue." Out the front windows of the bridge, 150 meters down, on the top face of the launch bay module, the bay 6 doors opened and closed a meter every few seconds.

Hardway
spent so much energy fighting itself that if any of the crew of the mining junk
Mohegan
were, by some miracle, still alive, then by the time SCS
Hardway
got out of its own way and rescued them, they'd be dead for sure.