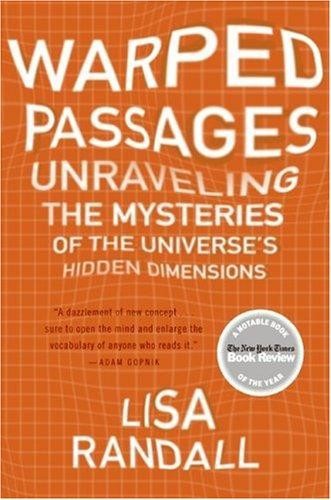 Unraveling the Mysteries of the Universe’s Hidden Dimensions

I. Dimensions of Space (and Thought)

5
Relativity: The Evolution of Einstein’s Gravity

III. The Physics of Elementary Particles

10
The Origin of Elementary Particle Masses: Spontaneous Symmetry Breaking and the Higgs Mechanism

12
The Hierarchy Problem: The Only Effective Trickle-Down Theory

13
Supersymmetry: A Leap Beyond the Standard Model

20
Warped Passage: A Solution to the Hierarchy Problem

23
A Reflective and Expansive Passage

24
Extra Dimensions: Are You In or Out?

When I was a young girl, I loved the play and intellectual games in math problems or in books like
Alice in Wonderland
. But although reading was one of my favorite activities, books about science usually seemed more remote and less inviting to me—I never felt sufficiently engaged or challenged. The tone often seemed condescending to readers, overly worshipful of scientists, or boring. I felt the authors mystified results or glorified the men who found them, rather than describing science itself and the process by which scientists made their connections. That was the part I actually wanted to know.

As I learned more science, I grew to love it. I didn’t always know that I would become a physicist and feel this way; no one I knew when I was young did science. But engaging with the unknown is irresistibly exciting. I found it thrilling to find connections between apparently disparate phenomena and to solve problems and predict surprising features of our world. As a physicist, I now understand that science is a living entity that continues to evolve. Not only the answers, but also the games and riddles and participation make it interesting.

When I decided to embark on this project, I envisioned a book that shares the excitement I feel about my work without compromising the presentation of the science. I hoped to convey the fascination of theoretical physics without simplifying the subject deceptively or presenting it as a collection of unchanging, finished monuments to be passively admired. Physics is far more creative and fun than people generally recognize. I wanted to share these aspects with people who hadn’t necessarily arrived at this realization on their own.

Some of the ideas I’ve included are abstract and speculative, but there’s no reason why they shouldn’t be understandable to anyone who is curious. I decided to let the fascination of theoretical physics speak for itself and chose not to over-emphasize history or personalities. I didn’t want to give the misleading impression that all physicists are modeled on a single archetype or that any one particular type of person should be interested in physics. Based on my experiences and conversations, I’m pretty sure there are many readers who are smart, interested, and open enough to want more of the real thing.

This book doesn’t skimp on the most advanced and intriguing theoretical ideas, but I’ve tried my best to make it self-contained. I’ve included both key conceptual advances and the physical phenomena to which they apply. The chapters are organized so that readers can tailor the book to their own backgrounds and interests. To help this process, I’ve bulleted the points that I’ll refer to later on when I present more recent ideas about extra dimensions. I’ve also used bullets at the end of the extra-dimensional chapters to clarify what distinguishes each of the possible options for extra-dimensional universes.

Because the idea of extra dimensions is probably new to many readers, in the first few chapters I’ve explained what I mean when I use these words and why extra dimensions can exist but be invisible and intangible. After that, I’ve outlined the theoretical methods with which particle physicists approach their work to clarify the kind of thinking that enters into this admittedly very speculative research.

The recent work on extra dimensions relies on both more traditional and more modern theoretical physics concepts to motivate the questions it answers and its methods. In order to explain what is driving such research, I’ve included an extensive review of twentieth-century physics. Feel free to skim through this review if you like. But if you do, you’ll miss a lot of good stuff!

The review begins with general relativity and quantum mechanics before turning to particle physics and the most important concepts
that particle physicists employ today. I’ve presented some rather abstract ideas that are often neglected—in part because they are so abstract—but these concepts are now confirmed by experiment and enter into all research that we do today. Although not all of this material is essential for understanding the ideas you’ll see later on about extra dimensions, I believe many readers will be glad to get a more complete picture.

After this, I’ve described some newer, more speculative notions that have been studied for the last thirty years—namely supersymmetry and string theory. Traditionally, physics has involved an interplay between theory and experiment. Supersymmetry is an extension of known particle physics concepts and has a good chance of being tested in forthcoming experiments. String theory is different. It is based solely on theoretical questions and ideas and isn’t even completely mathematically formulated yet, so we can’t yet be certain of its predictions. As for me, I’m an agnostic on this subject—I don’t know what string theory will ultimately be or whether it will solve the questions of quantum mechanics and gravity it sets out to address. But string theory has been a rich resource for new ideas, some of which I’ve exploited in my own research on extra dimensions of space. These ideas exist independently of string theory, but string theory gives us a good reason to think some of their underlying assumptions could be right.

Having established the context, I’ll finally return to the many exciting new developments about extra dimensions. They tell us remarkable things, such as that extra dimensions can be infinite in size yet remain unseen, or that we can be living in a three-spatial-dimensional sinkhole in a higher-dimensional universe. We now also know reasons why there can be unseen parallel worlds with very different properties from our own.

Throughout the text, I’ve explained physics concepts without equations. But for those who are interested in more mathematical detail, I’ve included a mathematical appendix. In the text itself, I’ve tried to expand the range of metaphors that are used to explain scientific concepts. A lot of the descriptive vocabulary everyone uses come from spatial analogies, but these often fail in the tiny realm of elementary particles and the hard-to-picture space with extra dimensions. It
seemed to me that less conventional metaphors, even ones about art and food and personal relations, might work at least as well in explaining abstract ideas.

To make the transition for the new ideas in each chapter, I’ve begun the chapters with a brief story that isolates a key concept using more familiar metaphors and settings. I’m having fun with these stories, so go back to catch the references after you’ve read the chapter if you like. You might think of the stories as a two-dimensional narrative going “down” through the chapters and “horizontally” across the book. Or you might treat them as a sort of playful homework problem that lets you gauge when you’ve absorbed the ideas in a chapter.

Many friends and colleagues helped me accomplish my goals for this book. Although I often knew what I was after, I didn’t always know when I had succeeded. A number of people deserve thanks for their generosity with their time, encouragement, and excitement and curiosity about the ideas I’m describing.

Several talented friends deserve particular thanks for their invaluable comments on the manuscript at various stages. Anna Christina Büchmann, a wonderful writer, gave beautifully detailed comments that helped me learn to complete the stories I was telling, both about physics and in general. She provided invaluable writing tips, always peppered with encouragement. Polly Shulman, another extremely talented friend, carefully read and commented on every chapter. I admire her logical and playful mind, and am very fortunate to have had her assistance. Lubos Motl, a brilliant physicist and dedicated science communicator (whose specious ideas about women in science we’ll ignore), read everything, even before it was readable, and gave extraordinarily useful suggestions and encouragement at every stage. Tom Lewenson offered the important advice that only a skillful science writer could provide and contributed several critically important suggestions. Michael Gordin gave the perspective of a historian of science and a connoisseur of this type of literature. Jamie Robins gave insightful comments on more than one version of the manuscript. Esther Chiao gave useful comments on the manuscript and the extremely helpful perspective of a smart, interested reader with a background outside the sciences. And I’m delighted that Cormack
McCarthy volunteered valuable encouragement and suggestions in the final stages of this book.

Several people provided interesting stories and observations that helped me in the beginning stages of this project. Massimo Porrati is a storehouse of fascinating facts, some of which appear here. Gerald Holton’s insights into early twentieth-century physics enriched my ideas about quantum mechanics and relativity. Jochen Brocks gave useful insights about what he liked in science writing and stimulated some writing ideas. Conversations with Chris Haskett and Andy Singleton helped me understand what non-physicists might hope to learn. Albion Lawrence made some valuable contributions that helped me sort out some difficult chapters. And John Swain passed along a couple of nice ways of presenting material.