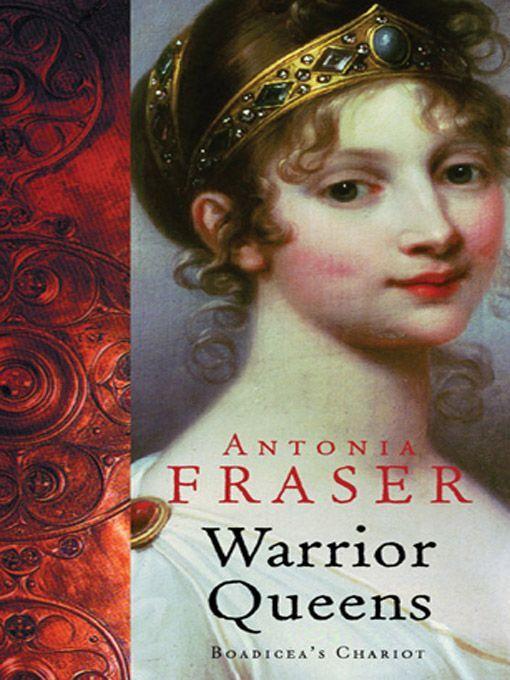 11. Lion of the Caucasus

12. Isabella with her Prayers

For my eleven granddaughters

Palmyrene noblewoman (photograph: M. Roumi, by courtesy of the Syrian Ministry of Tourism)

Palmyra today (photograph: M. Roumi, by courtesy of the Syrian Ministry of Tourism)

Statue of Zenobia as a captive (Hulton Picture Library)

Model of the temple of Claudius, Colchester (Colchester and Essex Museum)

Cast of bronze head of Claudius (Colchester and Essex Museum)

Skulls found in the Walbrook river (Museum of London)

The Boudican firing of Londinium, by Richard Sorrell (Museum of London)

The Britons’ last battle against the Romans, by Alan Sorrell (Museum of London)

Boadicea and her ladies, from Holinshed’s
Chronicles
(British Library)

Queen Isabella, a detail from
The Madonna of the Catholic Kings
(Oronoz, Madrid)

Queen Jinga being received by the Portuguese Governor (photograph supplied by the School of Oriental and African Studies, London University)

Queen Louise, King Frederick William III of Prussia and Tsar Alexander I at the tomb of Frederick the Great (Ullstein Bilderdienst)

Site of the massacre at Jhansi (British Library)

Kalighat watercolour of the Rani of Jhansi (Victoria and Albert Museum)

Statue of the Rani of Jhansi, Gwalior (photograph: Sophie Baker)

Mrs Thatcher with members of her Cabinet (Associated Press)

Cartoon of Mrs Thatcher as Boadicea (Gale of the
Daily Telegraph)

‘That’s the Romans for you – four hundred years of occupying
our
country’: these indignant words were spoken in 1986 by one who, like myself, was gazing down from an observer’s platform into some archaeological excavations in the City of London. Such robust patriotism, undaunted by the passage of quite a lot of time, reminded me of my earliest involvement with Queen Boadicea, via H. E. Marshall’s inimitable
Our Island Story
, a work enjoyed by me with passion as a child in the 1930s. It was Boadicea the patriotic heroine whose story first thrilled me; I wept for her treatment – and that of her daughters – and wept again, but this time in admiration, for her death.

The word heroine, as opposed to hero, is important in all this: for there is no doubt in my mind that a part – indeed a large part – of Boadicea’s appeal to me then lay in her female sex (the early feminism of those who have brothers close in age should never be underestimated). Half a century later in exploring both the history and the subsequent reputation of Queen Boadicea, those two interwoven themes of her patriotism and her femininity have not seemed to me either irrelevant or outmoded. I suppose therefore I can claim a lifetime’s preoccupation with the subject of Boadicea, even if my early feelings of dislike for the misogynist Romans have waned – just a little.

In recounting the stories of other Warrior Queens, as indeed in investigating that of Boadicea herself, I have obviously been dependent on the works of many scholars and experts in their field, to which detailed acknowledgement is made in the Reference Notes, but I should like to express my deep overall gratitude here. The spelling of proper names in a book crossing
so many civilizations and cultures has obviously constituted a real problem; I have attempted to solve it by choosing that spelling I have judged most intelligible to the English-speaking world at the present date; but I should emphasize that ultimately these various choices have been mine, not those of the experts acknowledged above.

In particular I should like to thank the following: HM the Queen for gracious permission to quote from the Royal Archives at Windsor and Miss Jane Langton, late of the Royal Archives, for her assistance; Dr Chaim Herzog, President of Israel, for conversation on the subject of Golda Meir and permission to quote from material unpublished in this country; Dr Michael Grant for help and encouragement at many stages; Rana Kabbani for stimulating discussions and advice concerning the Arab world in general and Zenobia in particular, and General Moustapha Tlass, the Syrian Minister of Defence; my ‘Georgian’ consultants, the late Sir Charles Johnston (who first called Queen Tamara of Georgia to my attention), Mr Laurence Kelly, Professor Nico Kiasashvili of Tbilisi, and Mrs Katharine (Vivian) Ashton; and Dr Graham Webster and his wife Diana, not only for his help but for their hospitality. Mrs Maria Fairweather provided me with fascinating
information concerning the reputation of Queen Jinga (Nzinga) in modern Angola; lastly the help of Angus Clarke and Daniel Johnson, who acted as my
occhi
and my
Augen
respectively, translating references to Matilda of Tuscany and Louise of Prussia, was invaluable.

When the Impossible Happens by Grof, Stanislav
Vampire Crush by A. M. Robinson
About a Girl by Sarah McCarry
Designated Daughters by Margaret Maron
The Importance of Being a Bachelor by Mike Gayle
Dirty Angel (Sainted Sinners #1) by Vivian Wood
Dungeons of the Divine (Blue Phoenix Book 2) by Tinalynge
It Must Have Been the Mistletoe... by Kate Hoffmann
Tapestries 05 - Embroidered Fantasies by N. J. Walters
Kiss Kill Vanish by Martinez,Jessica