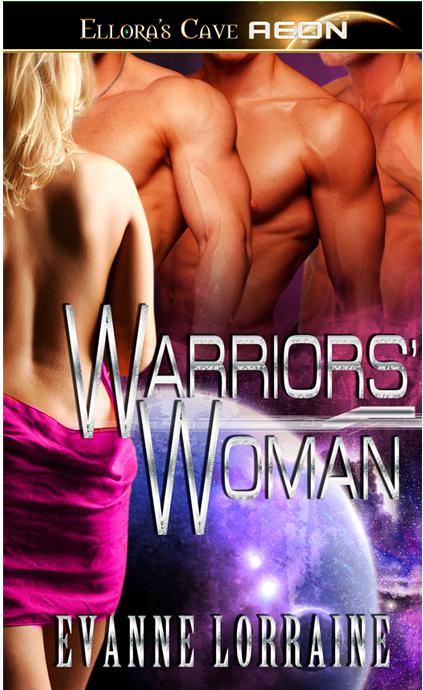 Book one in the Seduction Mission series.

After a pandemic decimated the world’s population, life became a deadly game of survival, and Minka, a wary contestant. An ordinary woman caught in an extraordinary situation, she battles weather, feral gangs and dangerous armored men. While she appreciates the help of three sinfully sexy mech warriors, she’s not buying into their time-travel delusion.

Their safe haven doesn’t last long and the triad is forced to move Minka to their intended location. Although each man has special talents vital to her rescue, in the end their success depends on her willingness to accept the men as her own.

Cold seeped through her boots and both pairs of socks, turning Minka’s toes into ice cubes. She stamped her feet every few steps to keep away the numbness of frostbite. Staying off the highway meant moving slower. Snow was nearly as serious a hazard as the roving gangs of survivors. Nearly being the keyword. Hypothermia might kill her, but winter wouldn’t rape or torture her first.

Nigel arched and stretched in the improvised traveling pouch. She’d fashioned the sling from what used to be a rich paisley wool challis. The tattered scarf wrapped underneath the front of her warm, reversible, quilted coat.

“We’ll stop before dark. I’m looking for a good spot, pal.” Either he understood her words through the layers of cloth or else her tone reassured him. After a moment’s rearranging, his warm body snuggled back against her chest.

They’d been together since the cat found her in September. She’d been picking up groceries at a Cheyenne supermarket when he laid a plump rat across her boot as a token of his esteem. In an oddly civilized and grave exchange, she’d slit open a can of shrimp for him and decided he looked like an aloof, fastidious and inky Nigel.

A sullen sun slid toward the snowy peaks still ahead. Gusts of northern wind pelted her with stinging sideways flurries. Minka searched for a level campsite and settled for a crevice between two boulders. She shed her pack, rolled the loose powder compact, and set up while Nigel took care of business.

Huddled under the space blanket, they had the usual quick dinner of canned tuna, bottled water and a rubbery carrot—the last of the fresh food she’d scrounged in Laramie.

Nigel passed on the mediocre veggie selection with a dainty sniff, lapped his water, and purred enthusiastically over his share of tuna.

She gave him a scratch in his favorite spot between his black ears with a tired smile. “Good stuff, huh? Wait ’til we get to California. It stays warm all year and there’s bound to be scads of fresh fish in the lake. You’re going to love it there.” She moved her hand to pet his back with long, soothing strokes. “Other people are already there working to build a saner world. You know they’ll need a good mouser.”

They’ll need soldiers too.
Although outmatched in most hand-to-hand combat situations, Minka shot competitively in high school and college. She still qualified as excellent with a handgun or rifle.

Maybe someday, when the world was a safer place there would be room for artists again. Teaching art, painting with watercolors, and a strong intuitiveness about her closest friends and family were her only other gifts.

By the time Nigel began cleaning his whiskers with a moistened paw, it was already dark. She used her floss and toothbrush then loosened her clothing enough to quickly apply a chilly baby wipe to the most important areas. After rolling out the sleeping bag, she stripped off her coat and reversed the excellent camouflage garment. With the ease of routine, she folded it white side in and warm black side out, and fluffed the rectangle into a pillow. As she arranged the quilted fabric, she checked for rips or spots. Concealment was often her best defense and the long coat helped her blend into the snowy landscape.

Satisfied the outer layer was holding up well, she took off her boots and heavy socks. With numb fingers she changed the thin lining socks for a fresher pair before she tugged back on the warmer ones. She laid the faintly musty, damp liners over her pack to air.

Only the glow of Nigel’s amber eyes was visible inside their synthetic cave. By weary touch she removed the HG semiautomatic from the back of her pants and tucked it under her coat then tightened down the space blanket that kept them warm and dry.

The soft weight of drifting snow would soon cover the bright-orange exterior of the survival blanket, providing extra insulation and concealment. Minka curled on her side and tried to get warm. Nigel nestled under her chin, a comforting ball of warm fur. She fingered her mother’s pearl earrings, the only mementos of her old life, and silent tears slid down her face. At last, she fell asleep and dreamed about a hot shower.

“Where’s your mama, huh, kitty?” A man’s voice jerked her to full consciousness.

Why would anyone be looking for me?

Whatever they wanted, she was already sure she wouldn’t like it. Fear quickened her pulse and banded her chest, making a deep breath impossible. She stayed as rigid as the rest of rocky mountainside. In slow motion, she felt for the gun and palmed it with a silent prayer of thanks.

Instead of sticking the HG into the back of her pants, caution made her set the weapon within easy reach. She stayed hunched over so her small camp would look like another boulder more than a woman and moved as little as possible as she slipped on her boots.

A different man grumbled, “How do we know it’s even her cat?”

“Look at him, Hec.” The first man’s words were sharpened by apparent thinning patience. “Someone is feeding him regularly. Minka Dubiniski was rescued from this sector on this date. If we grab her first and take her back to the future we win.”

She was right about not liking anything she’d heard. The men were clearly delusional and they wanted to capture her.

The voices were far enough away for her to risk peeking through a small gap in the blanket. She couldn’t see them. But her limited field of vision didn’t mean they couldn’t see her.

“I’m tired of standing around in the snow. Let’s kill the cat and find her,” a third man complained from somewhere to her left.

She forced herself to move in the slow motion of drifting snow as she angled her gap. Then she spotted them, roughly a hundred feet south of her camp. Three big men stood in front of a vehicle, maybe a sports car prototype. They waited for her to make a mistake so they could snatch her. One held Nigel by the scruff of his neck.

Minka’s temper went up another notch and her eyes narrowed as she watched them through her weapon’s sight.

The creeps were clean shaven, wearing jeans, Western shirts and cowboy boots. Despite the freezing temperature, they scanned the area with no obvious urgency or even signs of discomfort. They didn’t seem to have anything in common with the roving gangs of survivors she’d avoided. These men were dressed like escapees from a dude ranch, which made no sense. The airborne contagion hadn’t spared many, not even the most isolated ranch hands or visitors.

Nothing about them made sense.

She held the pistol in the steady two-handed grip she’d used during competition.

“Fucker tried to scratch me.” The angry words were followed by a soft thud and Nigel’s weak yowl of pain as he hit the rocks.

I used to be a nice woman. I taught art to middle school kids. I never even had a traffic ticket. Then some maniac deliberately released the kind of bio-weapon that should never have been invented. The contagion killed almost everyone—everyone I cared about is gone. Now all I want to do is get Nigel and me to California where we can help build a saner world.

You creeps should be shivering in your fancy boots, because I’m not that nice school teacher anymore. I sleep with a loaded gun and you bastards hurt my cat.

The man strode toward her. Minka took careful aim, leading the steadily moving target ever so slightly, and then squeezed the trigger.

Her stomach lurched, along with the gun’s recoil, at shooting another human being, even an animal abuser. She’d aimed for his shoulder and watched his arm jerk. She was certain she’d hit him, but he wasn’t screaming or bleeding. Three pairs of eyes swiveled toward her thin shelter.

They stalked toward her in a vee formation. Behind the advancing enemies, Nigel still lay exactly where he’d been thrown.

Another stomach clench accompanied her sinking heart, but her resolve strengthened.

If Nigel died, she would mourn the rest of her life. Right now she was his only chance. She had to survive and the men’s plans would interfere with her modest goal to keep breathing.

At the grim realization, something inside her snapped, leaving her deadly calm. She shook off the snow-covered blanket, stood, and aimed again. She hit the point man just above his nose. A tidy black hole appeared where the bullet entered his brain. He fell.