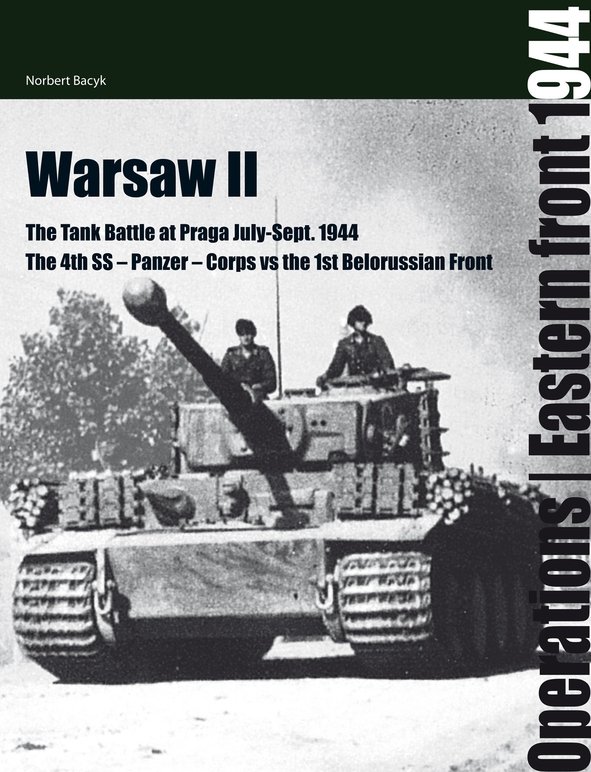 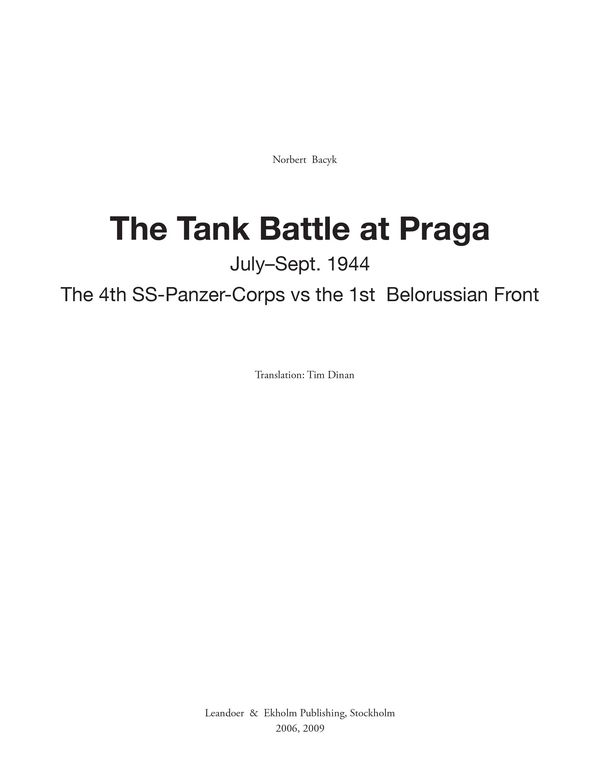 According to European law the author retains the right of copyright to the information contained in this title. The publisher asserts that any form of reproduction or copying of the text or pictures is strictly forbidden under the copyright laws. A breach of the law in this regard may result in the issuance of criminal charges by the office of the public prosecutor and sentencing through fines or a prison term in addition to a legal requirement to pay compensation to the author/ copyright holder. 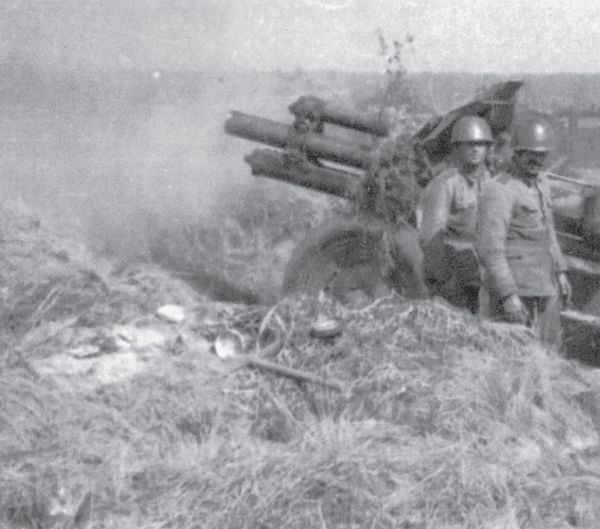 T
he battle for Praga, that part of Warsaw which lies East of the WisÅa River, and took place from the end of July until October of 1944, is one of the most dramatic episodes in the history of WW II. The battle for Praga was inextricably linked to the Warsaw Uprising, but both these events can be represented independently. This book describes the fighting between the German and Soviet Armies on the battlefield outside the Polish Capital. The result of this combat was that Praga at last came to be liberated, while the city sectors west of the river were condemned to destruction... 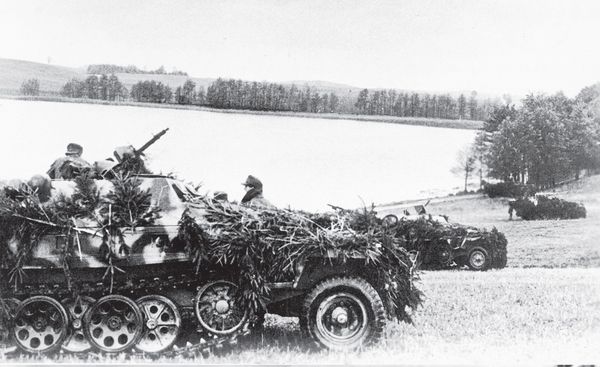 Two Sd Kfz 251/1 ausf D on the bank of the Weichel in the summer of 1944. The vehicles hail from the 19th Panzer Division. Note the third vehicle in the background. It's an Sd Kfz 251/17, anti-aircraft vehicle with a 2 cm FLAK 38 encased in a turret â an effective vehicle, though unusual in appearance. (Leandoer & Ekholm archive) 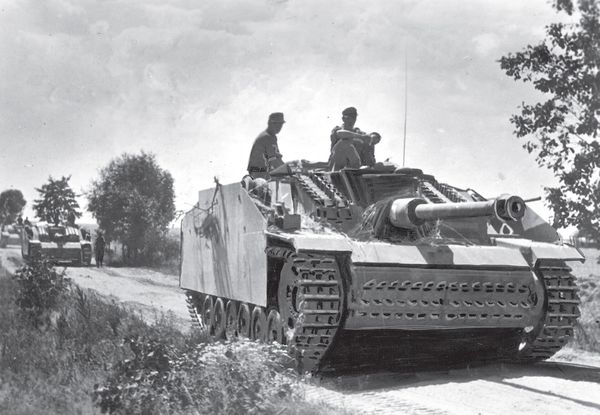 D
uring the late spring of 1944, the constant Soviet pressure on Ukrania and the relative passivity that prevailed on the Belarusian sector, led to the formation of two clearly separate operational areas. While the Germans and their allies had nearly been driven back to the “jump off point” for operation “Barbarossa” in the Ukraine; they nonetheless retained control over vast areas of north of the PrypeÄ River's wet lands. The front's consequent appearance was both an opportunity and threat for both sides in this conflict. But the Germans viewed strategical position as essentially defensive, partly due to their numerically weaker forces. Therefore the risk of their Belarusian region being outflanked from the south increased. An effective defence of the Belarusian frontline, which measured 1,100 km from Lake Nieszczerado to the town of Werba, would have required enormous military resources which the German's Eastern Army (Ost Heer) certainly did not possess.

At the beginning of June 1944, a lull prevailed across the entire Eastern front which gave an indication that both sides were preparing for renewed and terrible conflict. In Hitler's opinion, the greatest threat resided in the Soviet presence in Ukrania. He feared the so called “galician manoeuvre.” According to the Third Rich's dictator, the Soviet forces didn't plan to attack Byelorussia, but rather to strike with all out strength against the province of Lublin and then draw north into the area between the Wisla and Bug Rivers, cross the Bug and Narew Rivers in order to set out in an approximate direction towards KÃ¶nisberg, attacking and breaking off the contacts between the German homeland and Heeresgruppe “Nord” and ”Mitte.” This inaccurate assumption concerning enemy's intentions was also shared by Generalfeldmarschall Keitel, commander of the OKW, as well as Generaloberst Jodl, chief of staff at OKH command. In reality, such an ambitious plan of action lay far outside the Soviet Army's capabilities. The “Galician manoeuvre” would in any event have been difficult to implement given the difficult nature of the terrain, supply problems and, not least, from a purely tactical standpoint. Despite this, Hitler believed that it was a possible and ordered Heeresgruppe “Nord Ukraine” to concentrate a large potion of its available tank divisions for battle, east of the Bug River. As a result, during early summer, the commander of this Heeresgruppe, Generalfeldmarschall Walter Model, received under his command as many as nine tank divisions and two â in the main, these were assembled into the 1st and 4th Panzer-Armies. Apart from these armoured forces, the Hungarian 1st Army was put under his command. In contrast, the man entrusted with ensuring that Belorussia remained in German hands, Generalfeldmarschall Ernst Busch, had only one lone tank division and three armoured self-propelled gun divisions. 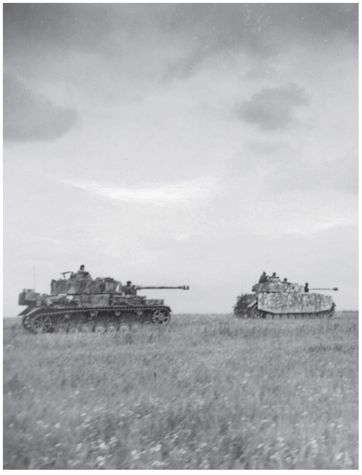 Tanks, models PzKpfw IV Ausf. G and H, from the 5th Panzer-Regiment in the vicinity of Chelm or Sokal, June 1944. (CAW)

However, the Soviet side had no intention of concentrating all their combat resources on only one operational objective. The plans for the new strategic offensive consisted, namely, in successively spreading out its operations to new frontlines. By employing this strategy it would prove impossible for the numerically outnumbered defenders to concentrate its reserves in any one place, and thereafter, the Germans were able to be defeated in a number of destructive battles. This masterly plan from STAVKA, (Stavka Vjerchnovo Glavnokommandujusjtjego â the Headquarters for the Red Army's High Command) was set into action on June 9 when the Soviet Leningrad Front carried out an offensive against the Finnish Army defending the Karelian Isthmus. This was only a supporting offensive but an extremely vital one from the standpoint of Leningrad's and Kronstadt's security. Barely two weeks later, on June 20, the strong Soviet partisan units in Southern Belorussia launched a broad wave of sabotage actions against Heeresgruppe “Mitte's” rearguard units. This marked the commencement of operation “Bagration”, in which four Soviet fronts destroyed Generalfeldmarschall Busch's Heeresgruppe. 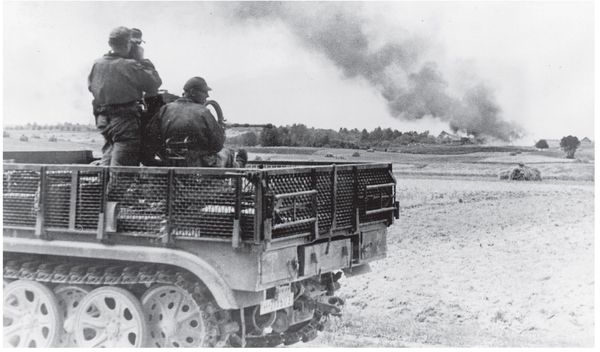 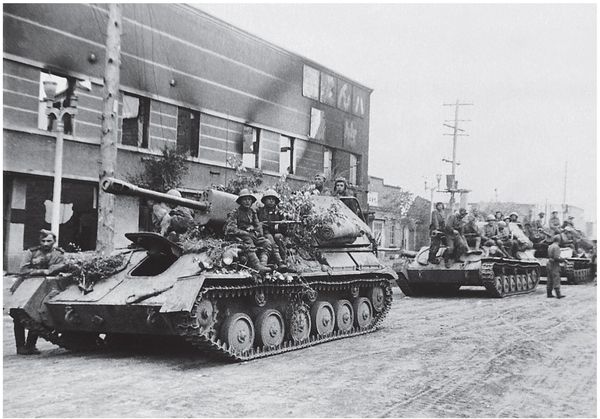 The Soviet assault-gun SU-76M from an unidentified unit during fighting in Belorussia, July 1944. (ASKM)

Selected to lead the actual execution of the “Bagration” offensive were: General Ivan Bagramians â 1st Baltic front, General Ivan Tjernjakow â 3rd Belarusian front, General Georgij Zacharov â 2nd Belarusian Front and General Konstantij Rokossovskij â 1st Belorussian Front, which later would initiate the attack only from its right, which is to say, eastern flank. Heeresgruppe “Mitte” which directly faced them; was composed of the 3rd Panzer-Army, the 4th Army, the 9th Army and the 2nd Army. Of these, it was only the 2nd Army that stood directly in front of the 1st Belorussian Front's left flank, and therefore positioned outside the reach of the Soviet's initial offensive.

While working on the operational details, it emerged that Stalin, with regard to Belorussia, favoured launching a powerful offensive at one single strategic point. However, General Rokossovskij, the commanding officer with most responsibility for that frontline, unexpectedly opposed the dictator and expressed his opinion that a pincer manoeuvre would be a wiser way to proceed. In his view, the first thing they should do is crush the flanks of the 3rd Panzer-Army and the 9th Army, and thereafter encircle the 4th Army. Stalin finally acceded to the general's forcefully expressed opinion, but underlined for Rokossovskij that he now, in fact, bore the entire responsibility for the operations success, or failure, on his shoulders. This was a thinly veiled threat but the commanding officer of the 1st Belorussian Front was completely sure of his opinion.

Events at the front confirmed that Rokossovskij's plan had indeed been the wisest option. Operation “Bagration” was launched on June 22, 1944, and led to the break up of the German's 3rd Panzar-Army and 9th Army after only seven days.
The German 4th Army, which had found itself wedged between these two, was half encircled. Due to the crumbling front, Hitler sacked Busch on June 28, and turned to Generalfeldmarschall Model to save the situation. This general, who was highly regarded by the “FÃ¼hrer” and “politically reliable,” had, at the same time, command over Heeresgruppe “Nord Ukraine”. Model, a former tank division commander, now became energetically engaged in the campaign but he did not succeed in saving the troops of the 4th Army. Together with the remnants of the 9th Army, they became completely encircled east of Minsk. The Soviet troops seized the Belorussian capital city on July 3, 1944. The fighting inside the encircled area ceased eight days later. The annihilation of the three armies meant in reality, that the entire Heeresgruppe “Mitte” had been destroyed. By the middle of July, essentially all of the divisions and some of the corps' commanders within the 3rd Panzer-Army, 4th Army and 9th Army had been killed or taken prisoner. Certain of these, for example, the commander of the 18th Panzer grenadier-Division, General Zutavern, or the commander of the 134th Infanterie-Division, General Philipp, had committed suicide. Germany had lost in excess of 300,000 frontline troops. In contrast, at the same time this took place, on the other side of the front, on June 29, Rokossovskij was promoted to Marshal.

A tank crew refuel a “Tigress” from the 5th heavy tank battalion in Belorussia, July 1944. (CAW) 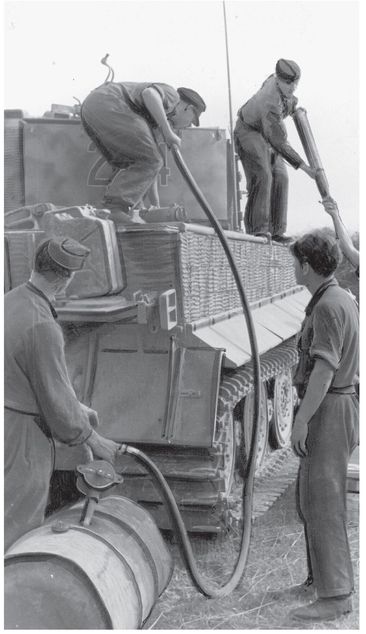 An armoured vehicle unit retreating in the summer of 1944. In the foreground, is an armoured transport vehicle Sd Kfz 251/1 Ausf. D. (CAW) 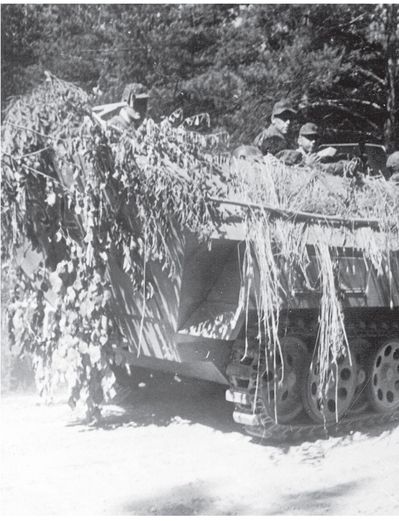