Read We the Living Online 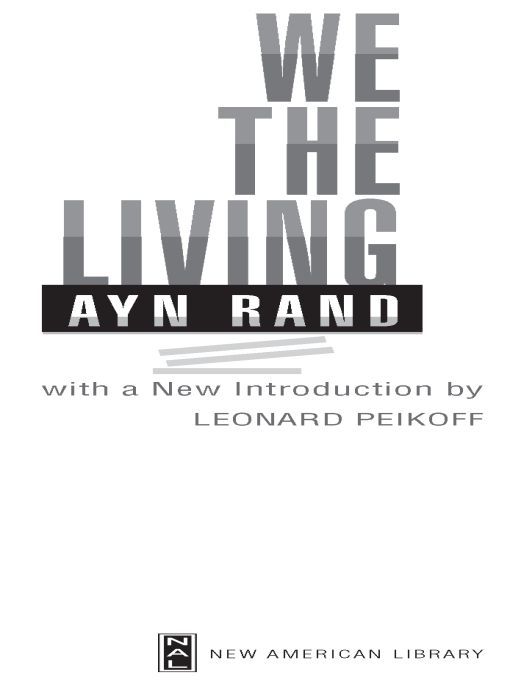 REGISTERED TRADEMARK—MARCA REGISTRADA
Set in Adobe Garamond
Without limiting the rights under copyright reserved above, no part of this publication may be reproduced, stored in or introduced into a retrieval system, or transmitted, in any form, or by any means (electronic, mechanical, photocopying, recording, or otherwise), without the prior written permission of both the copyright owner and the above publisher of this book.
PUBLISHER’S NOTE
This is a work of fiction. Names, characters, places, and incidents are either the product of the author’s imagination or are used fictitiously, and any resemblance to actual persons, living or dead, business establishments, events, or locales is entirely coincidental.
The publisher does not have any control over and does not assume any responsibility for author or third-party Web sites or their content.
The scanning, uploading, and distribution of this book via the Internet or via any other means without the permission of the publisher is illegal and punishable by law. Please purchase only authorized electronic editions, and do not participate in or encourage electronic piracy of copyrighted materials. Your support of the author’s rights is appreciated.
eISBN : 978-1-101-13766-6

When Day Breaks by Mary Jane Clark
A Better World by Marcus Sakey
His to Claim by Opal Carew
The Friendship Matchmaker by Randa Abdel-Fattah
Harvest by Tess Gerritsen
Eland and Jeanne (Tales of the Shareem) by Allyson James
Terry Odell - Mapleton 02 - Deadly Bones by Terry Odell
The Jelly People by H. Badger
The Earl of Ice by Helen A. Grant
The Eye of the Sibyl and Other Classic Strories by Philip K. Dick