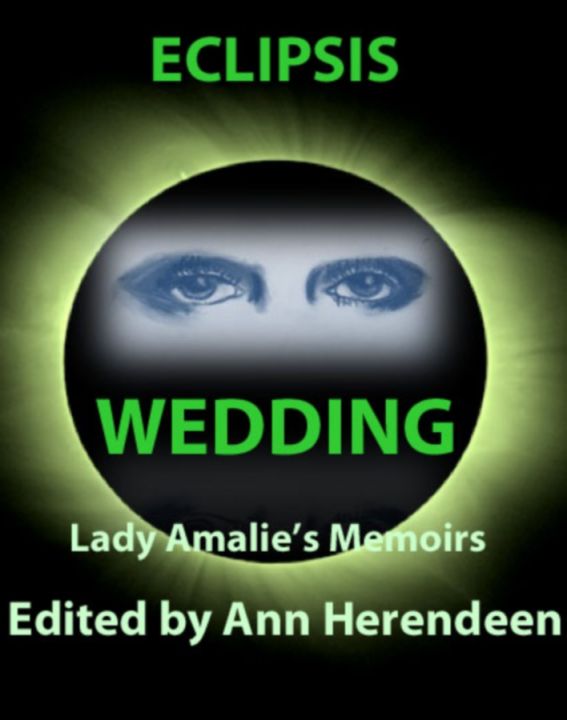 by Amalie, Lady Aranyi
edited and with an introduction by Ann Herendeen

This book is a work of fiction. Names, characters,
places and incidents are either products of the author’s
imagination or used fictitiously. Any resemblance to actual events,
locales, or persons, living, dead, or undead, is purely
coincidental. All rights reserved. No part of this publication can
be reproduced or transmitted in any form or by any means,
electronic or mechanical, without permission in writing from the
author or publisher.

Phyllida and the Brotherhood of Philander (2008)

Ann Herendeen is the author of two Harper Paperbacks:
Phyllida and the Brotherhood of Philander
(2008); and
Pride/Prejudice
(2010), a Lambda Literary Award finalist for
Bisexual Fiction. She lives in Brooklyn.
www.annherendeen.com

To RS, with apologies.

I
woke with a hair
in my mouth. Strange dreams were vivid in my mind, images of
Dominic and me coupling in a delirious, violent frenzy.

We
were
hungry for each other, I
thought, anticipation rousing me from my stupor. After months of
only telepathic simulation, the chance to make love with our bodies
and our minds in communion was all we could think about. But not
like that. Why, now, would I have such dreams? A jumble of soulless
motion, humping and grunting, whimpering and crying, they had
nothing of the love that had made our sexual encounters in
communion worth all the trouble of imagining them into the
semblance of reality.

Well, they were only dreams. Best to forget
them and ready myself for our first real night of love. Our time
together would be briefer than we might wish, and we must make the
most of the impromptu visit Dominic had proposed. We could not
marry, not in the binding form of aristocratic alliance that
Dominic would prefer, but this would be our wedding night all the
same. Strange, though, that I was waking from deep sleep and
Dominic was not in the bed with me. I couldn’t feel his presence at
all. If he were anywhere nearby I should be almost overwhelmed by
the communion.

What did I remember of yesterday?
We
had left the seminary of La Sapienza at dawn, had pushed our horses
to make what speed we could in the slush and mud of the spring
thaw. The journey from the city six months ago had been my first
time on horseback. I had not ridden since, and I had worried that I
would not be able to keep up with Dominic and his men. And I could
not.

Although for much of the trail the poor
conditions held us to a pace little faster than a walk, even that
had begun to tire me by the time Dominic allowed us a rest and a
break for the midday meal. He noticed my shakiness as I tried to
remount the little mare he had brought for me, and took me up
behind him on his own horse, telling one of his men to lead the
mare. I wrapped my arms around his slim waist, resting my head
against his straight back. The communion between us then had been
better than a hot meal and a soft bed in the way it had replenished
my strength.

We would have made it safely to Aranyi but
for the dark clouds that rolled down from the top of the mountain
we were climbing in the mid-afternoon, obliterating the weak
sunlight. Minutes later we were engulfed by lightning and thunder,
and hailstones big enough to stun. Dominic shielded me with his own
body, bending over me, he and his men protected by their helmets
and heavy leather coats.

Ranulf, Dominic’s lieutenant, had noticed the
little hut, off a bend in the trail a few yards back, and we
hurried to it, an awkward file of men and frightened horses,
Dominic in the lead, half-carrying me like a precious bundle under
his arm. It was a travelers’ shelter built into the side of the
mountain, partitioned into hut and stables, and stocked with
kindling and dry wood. The men tended to the animals while Dominic
shouldered open the door and pushed me in to safety.

And that’s when it started. I had been trying
to light a fire in the hearth, but something was wrong. I couldn’t
make the inner flame. Six months of training and I couldn’t manage
the simplest trick of
crypta
. Dominic ducked in at the door
then, and I turned around, meaning to ask him for help, but one
look at him stopped the words before they reached my throat.

His eyes with their protective third eyelids
lowered were still opaque and reflective; they had not turned
glassy in what I knew was a sign of danger. There were no thoughts
readable in his mind. He wasn’t shielded, keeping his thoughts in.
It was as if he were empty, drained of all emotions or
consciousness. The communion that had enveloped us as we rode had
vanished, and something else had taken its place, in both of
us.

I ran to him, this new force propelling me
the few steps across the room like a marionette hoisted on its
strings. With a laugh that was more a shriek of pain than of joy,
Dominic picked me up and tossed me on the bed, unbuttoning his
breeches as he spread my thighs, bunching my skirts up around my
waist and entering me before we had even removed our traveling
cloaks. And so we began our long evening that ran into night of
mindless sex.

Mindless
. That was the difference.
Ever since I had arrived on Eclipsis, when I had known Dominic only
as a presence in my brain, it was our minds that had connected us,
our thoughts that had led us to a love that had overcome all the
differences that should have divided us. A connection of
crypta
, La Sapienza’s sibyl, Edwige Ertegun, had called it,
a love that began in the telepathic areas of the brain. Our love
had not developed out of an initial sexual attraction; it was the
reverse, our conjoined consciousness creating desire, inducing our
bodies to imitate what our minds had already accomplished.

Yet last night’s excess had been truly
mindless. When Dominic had caught me in his arms, the touch that
should have brought us directly into communion had led only
to—fucking. An image of mating insects came to me, the body of the
male praying mantis continuing to pump into the female even after
she has bitten his head off.

There was nothing intrinsically wrong with
what we had done.
Fucking your brains out,
we said on Terra,
with a mix of contempt and longing, a physical need so intense that
satisfying it obliterated all other considerations. But our brains
had been gone before we started; our fucking had overridden thought
and emotion and common sense. I had wanted Dominic as much as he
had wanted me, but my soft flesh, my small frame, my skin that
bruises so easily could not withstand the continued pounding of my
lover’s vigorous activity. Dominic is blessed with unusual strength
and a superior level of energy. Last night he had been like a man
possessed, never tiring, rising again soon after each climax.
Linked without communion, there had been no understanding between
us, nothing to let Dominic know I needed gentleness, that I had
reached the limit of my endurance.

You could have told him
, I reminded
myself. What had I done, what had I had said? Nothing. I had not
protested, or begged, or fought, had not even considered it. It
seemed I, too, had been possessed. We had lost the ability to use
language, spoken or thought. It had not occurred to me to stop, or
to make Dominic stop. Instead I had urged him on, against my usual
self-protective nature. I had pressed my body up against his,
moaning and growling my encouragement, the bruising and abrasion
inside me where Dominic was repeatedly thrusting with such ferocity
somehow not registering in the sensors of my brain.

The night’s events were a blur of tangled
limbs and inarticulate sounds. My one clear memory was toward the
end, when whatever spell had us in its grip had begun to wear off.
I had come briefly to my senses, aware only that I was being
roughly handled, and had clawed at the man’s face to make him let
go of me. He had grabbed my arms, pinned my wrists together above
my head in one strong hand and taken me again—slowly this time,
with a practiced skill that showed he had learned something of
women’s bodies from his few encounters with the opposite sex. But
the change in mood had come too late and I could no longer
respond.

I had let him continue, though, had welcomed
it as the one time during the entire night when what we did could
be called making love. It was only then that I had truly recognized
this man as Dominic. That act of domination had been his first
genuine desire. He had
chosen
to do it, not simply succumbed
to an external compulsion. My scratching of his face, perhaps the
drawing of blood, had produced the only natural emotion of the
entire night, an arousal in him that came from being with
me
, not from being possessed.

If only we had begun this way, as Dominic and
Amalie, not just two bodies flung against each other like a pair of
boots having mud knocked off them, I would have enjoyed it…

The gods help me
. The thought of
Dominic pinioning my wrists in gentle restraint while he brought me
slowly to the edge of climax still excited me. Bruised and sore as
I was, I had only to imagine Dominic making love to me in this way
and I wanted him again.

I huddled under the matted, scratchy
blankets, fear and helplessness quickly depleting my little
remaining strength. I thought miserably of how everyone in La
Sapienza had warned me off Dominic as Aranyi and dangerous, how
Raquel Hattori had talked of my “drowning” in my love for him, how
Edwige had not wanted me to go away with him. But I had, and the
“lifeguard” I had boasted of so confidently appeared to have been
off duty.

I sat up and, moving slowly against the pain,
pushed the covers aside, sliding my legs over and down to the
floor. I was going to have to find whatever pot or hole in the
floor passed for a toilet. Only now fully awake, I realized Dominic
was in the room, sitting on one of the rough wooden benches.
Something in his posture, the way he was hunched, the muscles tense
in his naked back, warned me. I shuffled toward him on wobbly legs
and saw that he was holding a short sword, point facing inward,
staring at the blade with fixed unblinking eyes.

With a sudden smooth motion he sat up
straight, stretched his arms to their full length, tightened his
double-handed grip on the hilt and prepared to plunge the blade
into his throat in ritual suicide
.

“No!” I shouted, although it came out more
like a croak. I ran to him, battering with both fists to knock the
sword out of his hands. My blows landed on metal, on bone and hard
muscle, producing little effect besides bruising my knuckles.

Had he really tried to kill himself? Or
had I extrapolated from his active thoughts to read his
intentions?
Either way, I accomplished something: I broke his
concentration. He lowered the dagger and looked at me. His face was
gray and worn, his beak of a nose standing out more prominently
than ever. There were bloody gashes on his cheeks where I had used
my nails. He looked as if he had aged ten years since yesterday. I
didn’t like to think how I must look to him, but his eyes told me
enough.