Read Not Your Mother's Rules: The New Secrets for Dating Online

Not Your Mother's Rules: The New Secrets for Dating 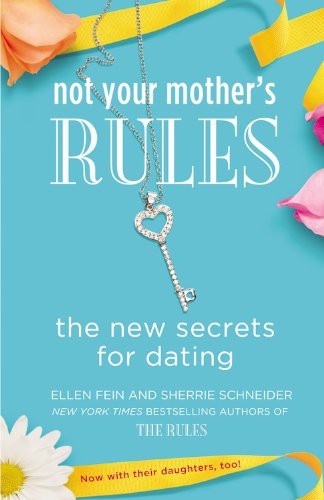 T
HANKS TO OUR
wonderful husbands, Lance and Roger, who were incredibly supportive while we were writing this book, as well as when our office phones rang off the hook with emergency consultations that sometimes interrupted family occasions! And thanks to our fantastic kids, Jason, Jenny, and Rebecca, who gave us their take on texting, Facebook, BlackBerry Messenger, iPhones, Skype, and Twitter! We couldn’t have written this book without you… or without our friends who freely shared their time and dating stories!

A special thanks to all our
Rules
contacts worldwide, as well as our dating coaches and clients and fans, who encouraged us to write a new book for the Y generation.

And a drumroll, please, for our brilliant literary agent and friend, Caryn Karmatz Rudy, who was always generous with her time and talent and loyalty for the last fifteen-plus years—and without whom
Not Your Mother’s Rules
would have been an idea instead of a reality. Last but not least, thanks to Hachette Book Group USA (formerly Warner Books, which published our first book) and a special shout-out to our visionary editor Amanda Englander, who gave us fabulous direction and guidance and was one of our biggest cheerleaders.

Chapter I
Why We Wrote This Book

H
AS YOUR MOTHER
or another relative, friend, or acquaintance ever said, “You’re so pretty, smart, and nice—why don’t you have a boyfriend?” Did you feel speechless because you couldn’t figure it out either and were not sure what you were doing wrong in the dating department?

Women today manage to graduate with honors, climb the corporate ladder, and even run for president of the United States, but getting a guy to ask them out or commit is next to impossible! Alas, we know the reason why most pretty, smart, and nice women don’t have a significant other: they either pursue guys or act too eager when guys make the first move!

Here’s how it all started: About twenty years ago we were having dinner with five friends at a Chinese restaurant on the Upper East Side in New York City, a scene sort of like one from
Sex and the City
, but before
Sex and the City
existed. Every woman brought her dating problem to the table. We noticed that the women who played hard to get, either on purpose or because they were truly busy, got the guys, while the women who asked guys out or showed too much interest
got dumped. We put two and two together, watched it work in real life, and decided to write a dating book to share the secrets of this phenomenon to help every woman on earth—not just our friends—date successfully.

Simply put,
The Rules
are a way of acting around any guy who initiates conversation with you, whether in person or online, so he becomes obsessed with you and wants to commit. Yes, it’s about playing hard to get, because guys love a challenge and lose interest when anything,
especially
women, are too easy.

The Rules
became an instant best seller and was translated into twenty-seven languages—because guys are the same all over the world! We appeared on just about every TV and radio show, preaching the play-hard-to-get gospel. We started a worldwide phone and e-mail consultation business and a free
Rules
network; we have helped thousands of women date with boundaries to find self-esteem, love, and marriage.

Now we want to help
you
date successfully; we want to share our time-tested secrets with you, which are applicable whether you’re dealing with texting, Facebook, instant messages, or Skype. You can truly do
The Rules
on any guy, in any situation, and get the fabulous payoff: a guy who is crazy about you!

Are you tired of guys texting you or friending or messaging you on Facebook, but not asking you out?

Have you heard of
The Rules
, but are not sure how to apply these dating secrets to today’s technologies?

Have you had it with casual relationships and hookups and spending Saturday nights or Valentine’s Day alone?

Do you wonder why some women who are not even as pretty or smart or nice as you get the guys, and you don’t?

Do you suspect that you are doing something wrong, but are not sure what?

If you answered yes to any of the above, then you are reading the right dating book! We wrote
Not Your Mother’s Rules
because how to get and keep a guy is not taught in high school, college, or even later in life. Women both young and old, including our clients, contacts, dating coaches, and those who are getting back into the dating game, begged us to write another book covering the latest shape dating has taken on. Even mothers wrote to us asking how they could help their daughters!

We wrote this updated version of
The Rules
to teach women how to capture the heart of Mr. Right in the
new
world of dating and romance. But the truth is, all the old
Rules
still apply! We strongly encourage you to read or at least browse through
All The Rules
in addition to this book; some of the content may seem a bit outdated, but the spirit of our message is still the same. In 2012 there are some nuances to the older
Rules
that weren’t even on their way to existing yet in 1995! We’ve included a few
Rules
here that have come up in our previous books, but with updates pertaining to today’s dating world. We even use some of the same terminology in this book, like buyer beware (
Rule #22
) and Next! (
Rule #31
). We also wrote a quick reference guide about the most important
Rules
to keep in mind from those books in
20 Rules That Bear Repeating
. Your mother may have bought you a copy of this book, or maybe you bought it yourself to find answers. No matter how it got into your hands, we will teach you how to use
The Rules
in a world full of texting, tweeting, wall writing, booty calling, and more—all of which has changed the way
everyone
dates.

But before you can do
The Rules
, you have to understand
that men and women are different. This fact may seem shocking because you were raised to think that men and women are equal and that women can do anything they want. Women can become doctors and lawyers and make the same salaries as men. They can run marathons and even run for political office! While all this is true, women cannot be the pursuer in a romantic relationship without the possibility of getting rejected, hurt, or perhaps even devastated. Men and women are not the same romantically. Men love a challenge, while women love security. Men love to buy and sell companies as well as extreme sports like mountain climbing and bungee jumping, while women love to talk about their dates and watch romantic comedies. In fact, one of the guys we interviewed for this book said, “I could never be a girl—you talk about relationships too much!” LOL! It’s true: A woman gets a text or e-mail from a guy she likes and she forwards it to five girlfriends to analyze it. A guy gets a text, thinks about it for less than a second, and then turns back to the football game. Vive la difference!

The other thing you need to understand is that men are extremely visual and cannot be attracted to a girl just because she is nice, smart, or funny. They know who they like instantaneously. It may sound bad, but physical attraction is everything for a guy. He can’t possibly love your insides if he doesn’t love your outsides, so it’s a waste of time to initiate contact. You may not be his type or look and he will eventually dump you for the girl he is physically attracted to. Conversely, while women also have a type/look, they can grow to like a guy who is funny or successful. But a guy just can’t do it! Women are more emotional about love and can be swept away by a guy’s personality, while most guys can’t get past a
woman’s looks. Yet another way men and women are wired differently!

Knowing these differences between the sexes will help you do
The Rules
—play hard to get—because being a challenge is the secret to getting a guy. Men are easily bored, so if you want a guy to pursue you, don’t act so interested. Treat him a little bit like a guy you don’t care for! As we wrote in our first book, don’t speak to a man first, don’t ask him out, don’t accept last-minute dates, don’t see him too often, and don’t date him forever. These are the keys to dating!

So why
Not Your Mother’s Rules
—and why now? Facebook, Gchat, texting, and other social technologies have made it almost impossible for women to be elusive and mysterious. Every woman is glued to her cell phone and guys can reach her morning, noon, and night. Not exactly hard to get! How exactly can a woman do
The Rules
under these new circumstances, you ask?

We were talking to a new client who was just out of college and she was complaining about how hard it is to follow
The Rules
with the new levels of accessibility. She said that, thanks to
The Rules
, she knew not to call men or ask them out. And thanks to
The Rules
for online dating, she got that she shouldn’t contact a guy after looking at his profile or respond to a wink. But texting, Facebook, Gchat, Twitter, and Skype were throwing her for a loop. She didn’t know if
The Rules
applied—and if they did, how exactly? She had so many questions! Was it okay to text a guy first? If you had to wait to text back, how long was
Rules
-y and how long was just rude? Were there new
Rules
for all this? With all due respect, she said, technology has changed so much since our previous books were published—everyone texts constantly
now and thinks nothing of friending guys and tweeting all day long, so how was it going to all work out for a
Rules
Girl like her?

We remember back in 1995 when readers labeling themselves feminists scoffed at the idea of not calling men and rarely returning their calls. Now not calling men first is considered normal!

While this book is for a new generation, nothing has changed about what women want in a relationship: to be able to trust that a guy loves them for who they are, and to know that he will be there for them.
The Rules
still apply!

OMG! I'm in Love with a Geek! by Rae Earl
BUY ME (Mistress Auctions Book 2) by Riley, Alexa
the Last Run (1987) by Scott, Leonard B
Experiment in Terror 06.5 And With Madness Comes the Light by Karina Halle
Worth Waiting For by Delaney Diamond
The Sabbathday River by Jean Hanff Korelitz
NHS for Sale: Myths, Lies & Deception by Jacky Davis, John Lister, David Wrigley
Mercury Revolts by Robert Kroese
Wild Nights with a Lone Wolf by Elisabeth Staab
The Sleeping Sands by Nat Edwards