Read Wednesdays in the Tower Online

Wednesdays in the Tower 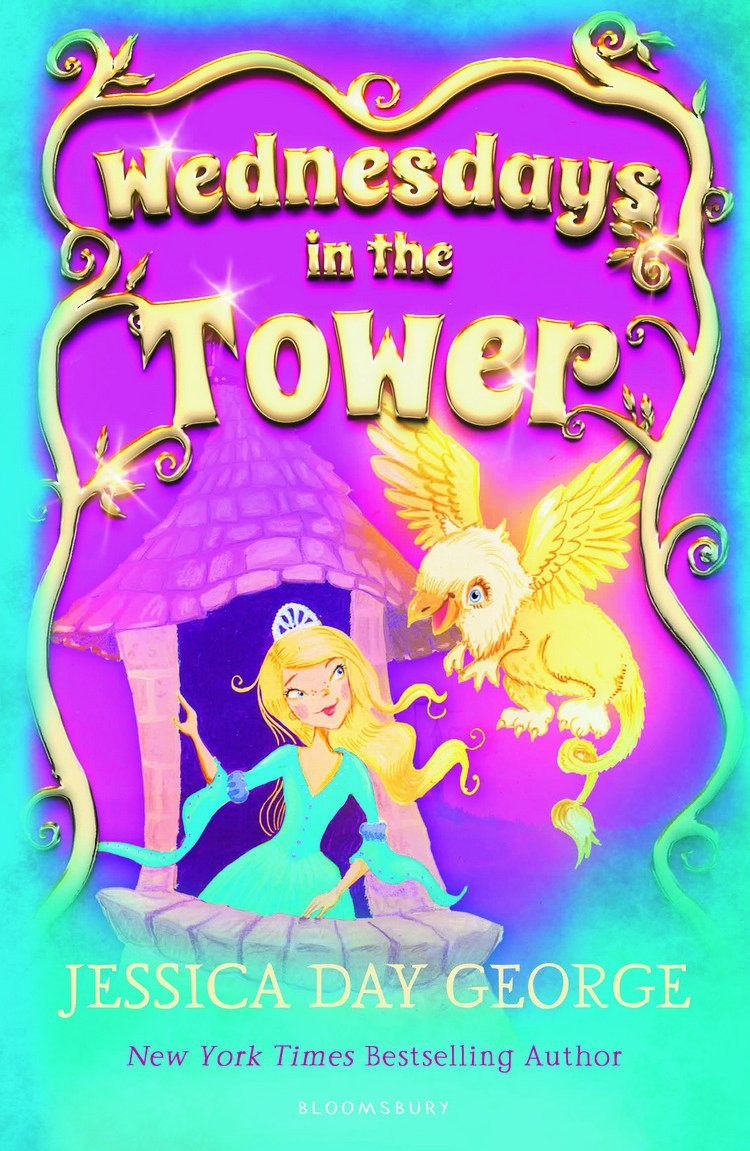 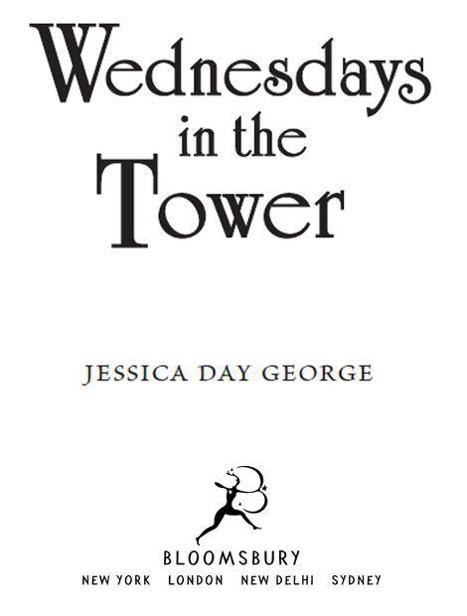 For Baby Roo, who has been my companion during every moment of writing this book

There are a lot of things that can hatch out of an egg. A chicken, for example. Or a dragon. And when the egg in question is the size of a pumpkin, and almost as orange, not to mention burning hot, you know that you’re far more likely to get a dragon than a chicken. So when Celie found the egg—large, orange, and too hot to touch—lying in a nest of oddly vine-like moss in the new tower, she was convinced that it held a baby dragon. Where it had come from and what would happen when it hatched were two questions that she wasn’t sure she wanted answered.

It was a Wednesday, so Celie didn’t expect to find any new rooms in Castle Glower. The youngest of the Glower children, Princess Cecelia—Celie, to nearly everyone— knew the Castle better than any person living there, and thought she knew what to expect from it. The day before had been exciting enough, with the room with the bouncy
floor being moved to the opposite end of the Castle, and a long room filled with exotic armor appearing just off the portrait gallery. One no longer had to climb through a fireplace to get to the bouncy room, though the door was inconveniently located in her father, King Glower’s, study. And the Armor Gallery, as it had already been dubbed, was in the perfect place for such a thing, though the maids were nearly in revolt at the idea of having to clean and polish so many strangely shaped items.

As she left breakfast and went up the spiraling stairs to the schoolroom for her lessons, Celie wasn’t thinking of finding anything more interesting that day. She was mostly hoping that she would be able to get a look at some of the new armor after her lessons. Her eldest brother, Bran, newly home from the College of Wizardry and now instated as the Royal Wizard, had assured the maids that they would not have to clean the Armor Gallery, because he didn’t want anyone to touch the contents. At least some of the weapons had proved to have magic powers, and he wanted to figure out what everything did and how dangerous it was first. But Celie was sure he’d at least let her look at some of it, if she could get out of her lessons before dinner.

The schoolroom wasn’t at the top of the spiral staircase.

Celie looked around. She was in a long corridor that she had never seen before.

She flipped open the leather satchel slung over her shoulder and pulled out her atlas, a detailed set of maps that she had been working on for years. At last she was
nearly done with it, and had already talked to some of the Castle scribes about making copies for her family, but she wanted to get the latest changes in first. It helped that the Castle had not taken away any rooms in at least a month, though it had added a few rather interesting ones (including a second, smaller kitchen and the Armor Gallery), and moved several others. Celie’s room seemed to be permanently fixed on the eastern side of the main hall, but Bran’s room was now right next to it, and Lilah’s was just beyond that, which made Lilah pout: she had previously been on an upper level with fantastic views from both windows.

Celie flipped through her collection of maps, but couldn’t find anything that resembled this corridor. There were no doors along it, and the schoolroom was just
gone
, as was the old nursery. No one had used the nursery in years, of course, but they had stored their old toys and outgrown clothes in it. Celie found that map and crossed out the nursery, then put a question mark beside the schoolroom before hurrying along the corridor. She needed to find the schoolroom, both to correct her maps and to get to her lessons before Master Humphries had a fit.

At the end of the corridor was a wide flight of shallow steps. Celie could feel chill air moving down the stairs, as if a window at the top had been left open. Like many of the stairs in the Castle, these were oddly proportioned. Celie almost needed to take two steps on each riser, but they were only a few inches high, and it was awkward.
Fortunately there were only eight of them, and then she was stepping through a stone arch into a circular room with no roof.

The pale late-winter sun was shining down into the open room, and Celie stumbled as she walked forward, staring up at the thin wisps of clouds. The floor of the room sloped toward the middle like a bowl. In the middle of the bowl was a nest of moss and twigs, and in the middle of the nest was a gleaming orange egg. It was the same orange as a ripe pumpkin, and just as big as one. Celie gaped at it.

“Is that really an egg?”

Icy wind whipped through the uncovered windows and carried her words away. She took some careful steps forward and leaned over. She reached out a hand, wanting to knock on the shell. She imagined it would be cold and very hard, petrified from years of sitting in an open room.

But it wasn’t cold. It was hot, almost too hot to touch comfortably.

Celie snatched her hand back and ran for the door. She hurried out the archway and down the shallow steps. In the corridor leading to the staircase there were several enormous tapestries, but she didn’t stop to look at the details. She went back down the spiral steps and lurched to a confused halt on the next landing down.

Directly across from her was the schoolroom, just as it
always was. But for as long as she could remember, the schoolroom had been at the top of the spiral stairs, not halfway down. Hadn’t it?

“Princess Cecelia!” Master Humphries came to the door of the schoolroom, looking impatient. “Where have you been? You are a quarter of an hour late!”

“I went up the stairs, but there’s a new corridor there,” Celie said. She pointed upward.

“I don’t know what you’re talking about,” Master Humphries said, frowning. “Please come in, Your Highness. It is better that we begin late than not at all.”

“But I think I should tell my brother,” Celie said. “There’s an egg—”

“An egg?” Master Humphries raised his eyebrows. “I am sure that Prince Bran can find eggs in the kitchen, if he is so inclined, for breakfast,” her tutor said curtly.

“No, up there,” Celie said, pointing again.

“There is nothing up there, Your Highness,” Master Humphries said. He sighed. “Please do not use the Castle as an excuse. You of all people should be able to find your way around the Castle’s vagaries in a timely fashion.”

“But look!” Celie pointed more emphatically, looking up herself.

There was nothing above her but a smooth, gray stone ceiling. She felt a moment of dizziness as she discovered that she was now standing on the top step of the spiral staircase. The rest of the steps she had just come down, and
the corridor above where she had found the tower and the egg, were gone.

“There was a new corridor,” Celie said faintly. “And a tower with no ceiling. A nest. And an egg.”

“But, Your Highness,” Master Humphries said, taking her by the arm to lead her into the schoolroom, “it’s Wednesday.”

A week later, and still Bran wouldn’t let anyone touch the armor or weapons in the new gallery. One of the footmen had tried to help Bran move a suit of armor to a table for easier study, and the breastplate had sent a jolt of lightning through his hands that made them numb for hours afterward. That was when Bran had declared that until he was done inspecting everything, no one was allowed in the gallery unsupervised.

“Which breastplate was it?” Rolf said with great interest.

The younger of the Glower princes, he was the heir to the throne, as the Castle had decided on his tenth birthday. Despite his growing responsibilities, he was always up for some fun, and Celie was hoping he would find a secret way into the Armor Gallery and let her come as well.

“What does that lance do?” Celie said.

She had her hands behind her back, and was leaning as close to a long golden lance as she dared.

“It shocks little girls who breathe on it,” Bran said crossly.

Celie leaped back, but then she made a face at Bran. “Mean!”

“I’m here because Father sent me to ask you if you need anything,” Rolf said importantly. “And also because I’m really hoping you’ll give me first crack at any magical swords or helmets of invisibility.” He rubbed his hands together eagerly.

“Yes, I need something, and no, you cannot have a magical sword,” Bran said, making some notes in his notebook.

“What do you need?” Celie asked as she wandered over to look at a rack that held armor made of tiny overlapping wooden scales.

“I need Pogue Parry from the village, and to not be worrying that you’ll touch something,” Bran said. He sighed. “I’m not trying to be a bear, Cel,” he said kindly. “But some of these things could probably kill you with a single touch.”