Read Welcome to My Jungle Online

Welcome to My Jungle 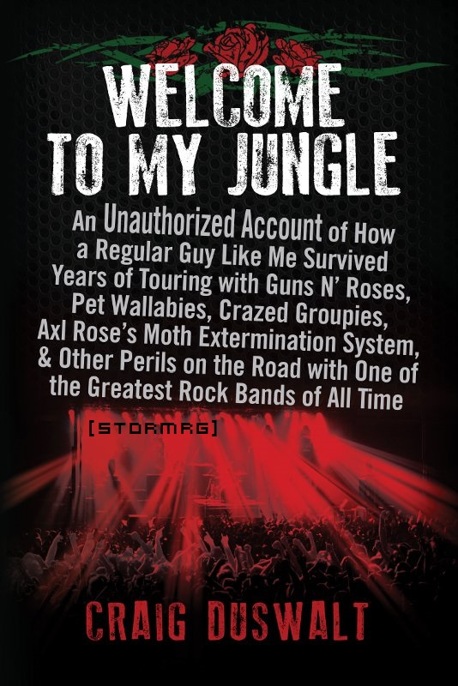 WELCOME TO MY JUNGLE

of How a Regular Guy Like Me Survived Years of Touring with Guns N’ Roses, Pet Wallabies, Crazed Groupies, Axl Rose’s Moth Extermination System, and Other Perils on the Road with One of the Greatest Rock Bands of All Time

WELCOME TO MY JUNGLE

Copyright © 2014 by Craig Duswalt All rights reserved. No part of this book may be used or reproduced in any manner whatsoever without written permission except in the case of brief quotations embodied in critical articles or reviews.

Welcome to my jungle : an unauthorized account of how a regular guy like me survived years of touring with Guns n’ Roses, pet wallabies, crazed groupies, Axl Rose’s moth extermination system, and other perils on the road with one of the great rock bands of all time / by Craig Duswalt.

For Natasha, Tyler, Ryan, and Hayden
.

WHO IS CRAIG DUSWALT?

1
HOW THIS ALL STARTED

How I Got into the “Business”

Should I Stay Or Should I Go?

The Shot Heard around the Hotel

Where Do I Apply?

Your Gun for a Hat?

The Use Your Illusion World Tour

FROM 1991 to 1994, there was no rock band on the planet bigger than Guns N’ Roses. Their
Use Your Illusion
albums sold more than 14 million copies altogether. Singles such as “Welcome to the Jungle,” “Sweet Child O’ Mine,” “Paradise City,” and “November Rain” topped the charts. Tour dates sold out in minutes all over the world. Guns N’ Roses was an unstoppable force—or so it seemed.

Unfortunately, the Use Your Illusion world tour would be the last for the band. When it ended, the “almost” original lineup would go their separate ways. To this day, the musicians who played on that tour have not performed together.

But what was it really like on the Use Your Illusion tour? How did it feel to be in the middle of one of the biggest events in the history of popular music? Some people may think they know what it’s like because they saw the movie
Rock Star
. But the reality is very different. No one who wasn’t there can really know what goes on behind the scenes during a rock concert.

But I know the reality, because I lived it.

As Axl Rose’s personal assistant/manager during the Use Your Illusion world tour, I saw weird stuff that would make your hair curl. I experienced things that would make most people run the other way and never look back. But I would never trade the experience for any amount of money.

Welcome to My Jungle
is a collection of funny and interesting stories portraying what it’s really like to live and work with a hugely popular rock band. I saw it all: the highlights, the low-lights, the good, the bad, and the just plain strange.

Readers of
Welcome to My Jungle
will be able to put themselves in the position of traveling with some of the most famous people in the world. I’m just a regular guy. I’m not a record industry mogul or even a professional musician. But in my position as Axl’s personal assistant/manager, I had unparalleled access to events and situations that no one has ever talked about before. Some of them might sound unbelievable, but they are true—I lived through them.

So many people wonder about what it would be like to witness history. What if you could have traveled at the right hand of one of rock music’s most iconic, polarizing, controversial figures? What if you could have been there as he interacted with other legends, like Liz Taylor, Brian May of Queen, or Bono of U2? What if you could have seen all the crazy things that happen to famous celebrities on the road? What if you lived with a group of guys who seemed to have everything, but couldn’t hold it together?
Welcome to My Jungle
will show you all these things from an insider’s perspective.

Welcome to My Jungle
is more than just insider stories about Guns N’ Roses. It’s also a look at the lifestyle of very wealthy, very famous people. It’s a “regular guy” look at the kind of world that most normal human beings will never experience. It’s difficult to even imagine the kinds of things that happen to megastars on the road. Some are good, some not so good.

Welcome to My Jungle
is my account of what it’s really like to live in the middle of a rock-and-roll hurricane, and walk out of it alive. Most of the conversations you will read are paraphrased, and, again, this is my version of what happened. I’m sure there are slightly different versions, and I might have mixed up a story with another story, and a city with another city, but this is what I remember from more than twenty years ago.

The legions of Guns N’ Roses fans out there will love it, and so will anyone who wants an insider’s view of what life at the top of the music industry is actually like.

So turn the page, and get ready for a wild ride.

WHO IS CRAIG DUSWALT?

“WHO IS CRAIG DUSWALT?” is one of the most frequently asked questions on a very popular Guns N’ Roses website. Short answer? I was Axl Rose’s personal assistant/manager on one of the biggest tours in the history of rock n’ roll.

At the end of the
Making of Estranged
documentary, Axl decided to leave in a clip of me joking around with August Jakobsson, the documentary cameraman. On camera, I said, “I, Craig Duswalt, am responsible for Guns N’ Roses. Me, Craig Duswalt. I did everything. Everyone else is nothing.” Axl thought it was hysterical, so he decided to add it to the documentary. The rest is history. Now, GNR fans want to know who the hell Craig Duswalt is.

Some stories I tell in this book, you may have heard. Most you haven’t. This book is my perception of what happened—and I was usually much closer to the event than anyone else, meaning my versions are probably the closest to the truth. I do understand there are two sides to every story. But this is MY truth.

I wrote this book because every time I tell someone I was Axl’s personal manager, I suddenly have their full attention. They always want to know something interesting that happened on the road. I usually share a couple of funny stories, but I always leave them wanting more.

To this day, I still get calls to do interviews. I turn down 99 percent of them. A few years ago, I answered ten questions via e-mail for an old, popular website called sp1at.com. Within two days, my interview was on more than 5,000 websites worldwide. It was incredible! It just goes to show that the fan base for GNR is still huge.

I consider the members of Guns N’ Roses, and members of the GNR crew, my friends. That means this book will not reveal any really dark or destructive secrets—and I have hundreds. If you want those stories, you’ll have to get me really drunk. Unfortunately for you, I don’t drink anymore—partly because of my days on the road with Guns N’ Roses.

A little backstory—I had previously toured with Air Supply as a band assistant. I took care of the band and the backstage area. I was basically the personal assistant to the entire band. This was my inauguration into the world of rock n’ roll. It was quite amazing for a twenty-one-year-old kid straight out of college.

One of my “jobs” for Air Supply was to invite beautiful women backstage to keep up the image of a rock band having lots of women around at all times. The great thing about Air Supply was that they attracted about 85 percent women to their shows. Not that they would do anything with these girls—heck, most of them were married. But that’s another book for another time. Anyway, I would hand out the backstage passes to these beautiful women so they could meet the band. One of the requirements for getting backstage was that they had to wear the pass on their shirt over their left breast. Sometimes the women asked me to put the backstage pass on for them. And so I did. (Hey, I was twenty-one—give me a break! You would’ve done the same thing.) I did make double sure I had their permission first. Air Supply was very popular at the time.

I grew up a lot traveling with Air Supply.

A few years after ending my stint with Air Supply I had an opportunity to tour with Guns N’ Roses. I decide to take the plunge.

I found out very early that GNR was all business. Really. Okay, it was
mostly
business. However, we did manage to have some fun and interesting things happened to us on the road.

I joined the tour in November 1991—the month Freddie Mercury of Queen lost his battle with AIDS. I was, and still am, a huge fan of Freddie Mercury and Queen. I found out right away that Axl also loved Freddie. Because of Guns N’ Roses I was lucky enough to meet hundreds of celebrities and rock stars. The only one I wished I could have met, but didn’t get to, was Freddie Mercury.

A lot of wonderful things happened to me on the road. But the best was meeting my wife, Natasha. (No, she wasn’t a groupie.) One of the best stories in this book is how we met.