Read What the Dog Ate Online 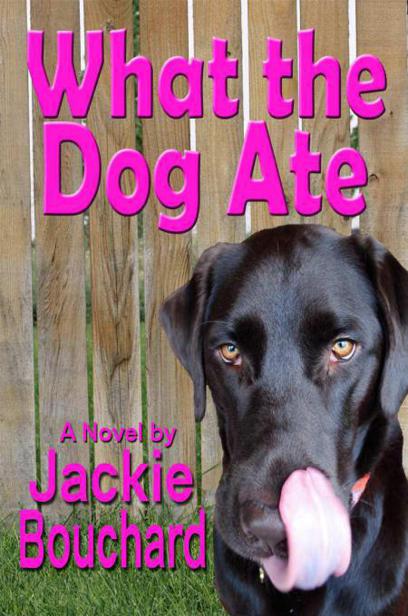 All rights reserved. No part of this book may be used or
reproduced in any manner whatsoever without the written permission of the
author, except for the use of brief quotations for reviews.

This is a work of fiction. Names, characters, places, and
incidents either are the product of the author’s imagination or are used
fictitiously, and any resemblance to actual events or persons, living or dead,
is entirely coincidental.

To paraphrase a Julio Iglesias and Willie Nelson song that
makes me want to poke my eardrums out: I dedicate this book to all the dogs
I’ve loved before.

Chapter 2: I Know How Humpty Feels

Chapter 4: Is There Nothing You Won’t
Eat?

Chapter 9: They Should Try to Bottle
That Smell

Chapter 17: What Are the Rules About
That?

Chapter 19: And You Should See My
Asparagus Fern

Chapter 20: That Really Gets My Goat

Chapter 24: At Least the Flight Was On
Time

Chapter 26: We Also Have Great Elbows

Chapter 27: This Could Be My Mailman

The vet handed Maggie Baxter a
plastic specimen bag containing a pair of size-tiny, lavender thong panties
extracted from her dog; but they were not hers. Or rather, they were hers now
since she’d just paid $734 to have Dr. Carter surgically remove them from
Kona’s gut.

She’d come home late the previous
night from a three-day conference. When she crawled into bed, Dave had muttered
hello, but was snoring again within the minute.

Then, this morning, she’d awakened
to the muted foghorn sounds of Kona heaving. As she’d hurried down the hall to
the living room, knowing that was where the chocolate Lab would be, she
wondered two things: how could Dave sleep through that horrid noise; and why,
in a house ninety percent floored with hardwood and tile, did the dog always
throw up on the carpet?

She’d made it in time and pushed
the big brown dog out back. Standing stiff-legged on the lawn, he had heaved
several more times but nothing came up. When she’d offered him breakfast and he
wouldn’t even look at it, she’d known a vet visit would be on the day’s agenda.

When Dave got up she’d told him
Kona wouldn’t eat. “I’ll drop him at the vet on my way in, but can you pick him
up?”

“Sure.” Dave had poured coffee
while she filled two bowls with cereal. They’d eaten in silence, reading the
paper, until he looked up and said, “It’s a bad sign that he’s not even begging
for our eakfast-bray.” After being called for his breakfast, dinner and treats
countless times, Kona knew those words meant his favorite thing: food. He went
nuts, barking and jumping when he heard them. They’d tried to train him out of
it, then given up and taken the lazier route of using Pig Latin for those words
or spelling them out.

“I’m not sure he’ll even react to
his trigger words today, the poor guy,” Maggie had said, while wondering if
Dave would ask how her conference had been. He only seemed interested in his
paper and the dog. But then, she couldn’t blame him. No one but the keenest
accountant wants to hear about a financial reporting conference; she couldn’t
even work up any excitement about it herself.

She’d finished getting ready and
pecked Dave’s cheek as he rinsed their coffee cups.

“OK, we’re eaving-lay,” she’d said.
Leaving was another trigger word. When they went out they’d call, “We’re
leaving; be good!” and toss the dog a peanut butter filled Kong toy.

“You be a brave boy.” Dave had
kissed the top of Kona’s head.

Maggie had smiled, but thought,
it’s easy to make jokes when you’re on the receiving end of the bills.

An x-ray had confirmed a bowel
obstruction, and Dr. Carter said he’d call when Kona was out of surgery.

Later, he’d reached Maggie at work
and told her Kona had come through fine; she could pick him up at four. Maggie
exhaled, realizing she’d been holding her breath.

“I’ve got the panties he ate right
here in a specimen bag. I’ll save them for you. I guess it’s like traffic
accidents or something; people always want to see what I pull out of their
dog.”

“No, really, that’s fine. You can
throw them away.”

“You would not believe this boxer I
had in here last month. Pulled six of those plastic stuffed animal squeakers
out of him. Family left him home during that freak thunderstorm we had, and he
went crazy, pulling his toys apart and eating the squeakers.”

But Maggie wasn’t listening. Her
mind had rewound and hit pause on one word: panties. She’d pictured the white
cotton Ladies’ Fruit of the Looms under her khakis, her standard issue, and
thought, these are
underwear
, not panties. She owned
a few skimpy pairs, but she only wore them when she and Dave dressed up to go
out, and they hadn’t done that in a while.

“Actually, yeah, could you save
them for me?”

“See, you can’t help yourself. No
problem.”

Maggie had emailed Dave: “Dr. C
called. K’s all good. I can pick him up after all. See you at home.”

Maggie had given up pretending to
work and left the office at half past three, drawing looks from her staff since
she never left early. At the vet’s, the receptionist had led her into the
windowless examination room where Kona, lying on the yellowed linoleum floor
subdued from the anesthesia, had given her a single thump of his tail. Dr.
Carter had begun praising Kona for his bravery, but she’d spotted the bag with
its delicate lavender contents lying on the gleaming stainless steel table,
which winked at her as the fluorescent light flickered, and stopped listening.

The keys jangled as Maggie put them
in the ignition. She’d held it together while the vet tech put Kona in his
plastic cone and processed her credit card, but now, in the car, her hands
wouldn’t stop shaking. She wanted to scream down the freeway at the maximum
speed limit (hell, she might even go a few miles per hour over) so she could
get home and scream at her husband. But when she turned up the 805 onramp, the
traffic was terrible. She hadn’t driven home this early in ages; she almost
never left work before seven or eight o’clock, sometimes even later. She’d
forgotten how bad San Diego rush hour could be. She noticed the skin stretched
taut over the knuckles of her hands, at ten and two on the wheel. She took a
deep breath, released it, and loosened her grip. On the crawl home, she’d have
plenty of time to plan the best approach for confronting Dave, time to think
about how they’d gotten to this point, and to contemplate how she could have
been so clueless.

In her wildest nightmares, she
never thought Dave would cheat. The very thought was so foreign that they used
to make jokes all the time. She’d call to say she needed to work late and he’d
pretend to click into a waiting call and whisper in a deep voice, “Hey, Babe,
I’ll be right over; the wife’s gotta work late. Oh wait, uh, Maggie?” They also
had a running routine where she would “let slip” references to their imaginary
pool boy, Fabian. Dave always replied that he couldn’t understand why they
needed Fabian when all they had was Kona’s plastic kiddy pool.

She used to make him laugh, asking
if it bothered him that both her paycheck and her butt were bigger than his.
She’d stopped asking when he gave her only a wan smile in response. Of course,
the differences loomed larger now. Sure, she’d always earned more, but now she
won much bigger bread—huge, hearty loaves compared to the slim baguettes he
brought home.

And she’d had to drop working out.
Each day held only so many hours, and work and sleep hogged almost all of them.
Meanwhile, Dave had been cycling, running with Kona and going to the gym more
than ever. She’d told him she was working her ass
on
for them. He used to grab at what he called her “handfuls of love,” but when
was the last time that happened?

Not only had they stopped joking,
they were barely talking beyond the basic necessities. She’d get home from BioHealth
and Dave would mute the TV to suggest an appropriate nuking time for her dinner
in the fridge. Then the volume blared back on. That had been going on for,
what, weeks? A month? But she’d been too stressed to deal with it. At work, the
usual quarter-end madness shoved all other projects aside; at night, their
personal tax return beckoned. She’d barely finished it by April fifteenth. Exhausted,
she’d put no effort into coaxing him out of his pouting about her crazy hours.
But now, she began to realize the depths of the problems at home.

Thirteen months ago BioHealth
listed its shares for the first time on the NASDAQ, its Initial Public
Offering. Yes, the IPO lay at the root of her stress. But, stress aside, it fit
with the plan.
Their
plan.

They would both work, work, work
and save enough money to start up the bicycle-tour traveling company they
always fantasized about. They’d run that for ten years or so, as long as they
still enjoyed it, and then retire early. Ride their bikes, travel, cook gourmet
meals, learn Italian, have sex on random Wednesday mornings... afternoons,
even... or whenever; it was going to be fantastic.

At first, they both signed on,
committed to the plan. Dave had chugged along at his job as Marketing Director
at PETCO; she’d wowed them at BioHealth. The company rewarded her with a bonus
of 50,000 shares and promoted her to Vice President of Accounting—a huge boost
to their plan. She’d not only gotten a raise, but if the stock price climbed to
$20, they’d have a million bucks. A million! Of course, it wasn’t a sure thing,
but the researchers and execs at BioHealth were banking on it. And, even if it
didn’t reach a million, it would at least pad and protect their nest egg,
providing a soft landing if their bike tour business didn’t succeed.

As she merged from the 805 freeway
to the 163, she remembered the night of her promotion. They’d popped open a
bottle of champagne; even splashed some in Kona’s bowl, and he’d lapped it up.
The plan’s pieces started to fit together. The IPO work drained Maggie, with
its seventy- to eighty-hour weeks, but Dave hadn’t complained, since the end
appeared in sight.

Only, it didn’t end. The promotion
meant work days that slogged on into the nights and work weeks that spilled
over, making a mess of their weekends.

Dave told her he was fed up, but
she begged him to hang in. They needed to be patient and wait for the good old
Federal Drug Administration folks to come through for them. As soon as the FDA
approved BioHealth’s diabetes drug, the stock price would soar and they’d sell.
The complex approval process would take time, but meanwhile, they’d work on
their business idea. What was another twenty-four months or so in the greater
scheme of things? It was a perfect plan.