Read What the Hex? (A Paranormal P.I. Mystery Book 1) Online

What the Hex? (A Paranormal P.I. Mystery Book 1) 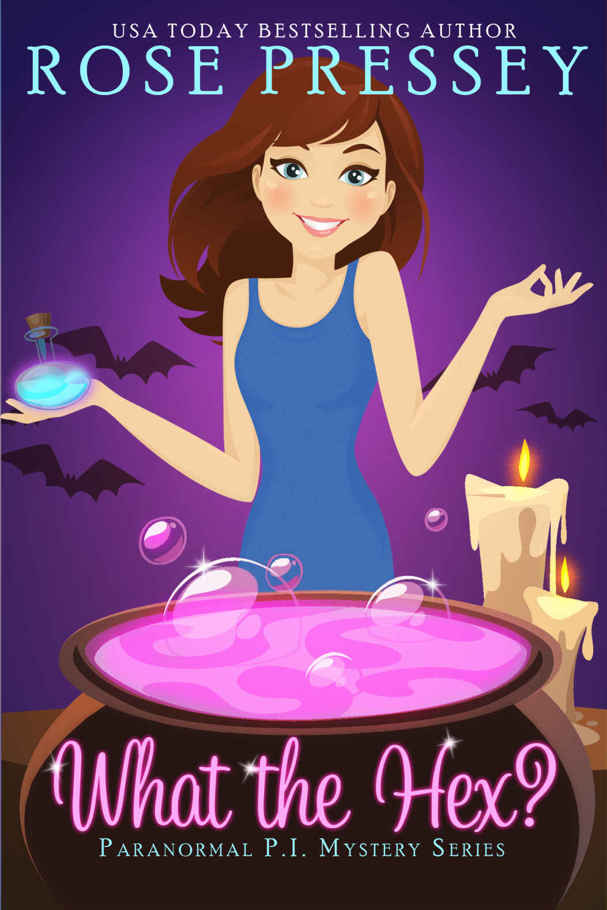 WHAT THE HEX?
A Paranormal P.I. Mystery
Rose Pressey

Praise for Me and My Ghoulfriends by Rose Pressey

“Rose Pressey spins a delightful tale with misfits and romance that makes me cheer loudly.”

“Her characters are alive and full of quick witted charm and will make you laugh. The plot twists keep you turning the pages non-stop.”

“I absolutely loved this book! It had me chuckling from the beginning.”

Yesterday Cece Cash came dangerously close to stuffing Derek North into the trunk of her car and dumping his body in the Vegas desert. Then she snapped out of her daydream and realized he wasn’t worth the prison time.

As much as Cece hates to admit it, she needs Derek. Her old pal’s cash rescued her private investigation agency. Her witchcraft hadn’t been enough to save the business. Luckily for her, Derek has the money and she has the skills. Well, at least she thinks she has the skills. She’s still counting on the spell casting to help.

Now if she can just pay Derek back, she’ll send him packing to Savannah and get him out of her hair for good. Wisecracking and fun-loving Derek has other plans though. He enjoys being a part of the agency. Life is a party and he isn’t about to waste a minute of it. Why else would he come to Vegas?

What happens in Vegas doesn’t always stay in Vegas. Sometimes the shenanigans pop up in the middle of the desert in a burning car. A successful owner of a fitness club is suspected of murder and disappears right after the crime. Cece and Derek are hired to find the woman and uncover the truth about the homicide of a young fitness trainer. The stakes are high in Sin City for Cece and Derek. Will luck be on their side or will they lose it all?

These Haunts are Made for Walking

A Walk on the Haunted Side

Book 2 – All Dressed Up and No Place to Haunt

The Larue Donovan Series:
Book 1 –
Me and My Ghoulfriends
Book 2 –
Ghouls Night Out
Book 3 –
The Ghoul Next Door

Book 4—Ghoul of My Dreams

The Mystic Café Series:
Book 1 –
No Shoes, No Shirt, No Spells
Book 2 –
Pies and Potions

All rights reserved, including the right to reproduce this book or portions thereof in any form, (electronic, mechanical, photocopying, recording, or otherwise) without the prior written permission of the copyright owner. This book is a work of fiction. The names, characters, incidents, places, and brands are the product of the author’s imagination and not to be construed as real. The author acknowledges the trademarked status and trademark owners of various products referenced in this work of fiction, which have been used without permission. The publication/use of these trademarks is not authorized, associated with, or sponsored by the trademark owners.

This is to you and you know who you are.

To my son, who brings me joy every single day and is the love of my life. To my mother, who introduced me to the love of books. To my husband, who encourages me and always has faith in me. A huge thank you to my editor, Eleanor Boyall. And to the readers who make writing fun.

This morning I came close to stuffing Derek North into the trunk of my ruby-red Ford Fusion and dumping his body in the Vegas desert. Then I snapped out of my daydream and realized he wasn’t worth the prison time.

My day had started out routine. I’d stopped for a double cinnamon latte at Starbucks on Rancho Drive and then navigated the traffic over to my office on Flamingo Boulevard. A few early-morning stragglers stumbled out of the casinos and wandered down the sidewalks like zombies, trying to remember which hotel they were staying in.

When I breezed through the door of my office with coffee in hand, humming the theme song from
Golden Girls
, I stopped dead in my tracks. Passed out in the middle of my office floor was my ne’er-do-well partner. Now it was understandable why I would want to get rid of him, right? Derek didn’t have a stitch of clothing on his body. Not even a pair of tighty-whities. Don’t get me wrong, he was easy on the eyes, but that was neither here nor there.

His clothing littered the floor where he’d obviously stripped sometime in the wee hours of the morning. I never should have given him a key to the office. Most definitely I should have cast a spell to ward off his bad-boy ways.

“Get up.” I poked his bare ass with my foot.

My black stilettos had pointy toes so I was sure he felt the jab. He groaned and rolled over, exposing his junk. A silky trail of blond hair started just above his navel and slid down to his… never mind. I shielded my eyes with one hand. “Please cover yourself.”

The door behind me opened. George Augustus had arrived. Just like every other day he’d worn his white short-sleeve button-down shirt, tan pants, and shiny brown loafers. His bow tie was red with yellow and white polka dots. George had a collection of ties that dated back to the 1950s. He wore one every day. Recently he’d attempted to dye his gray hair. Now it was the color of the pitch-black night.

George turned around and walked back out the door.

I ran after him, grabbing his arm. “Please come back, George. Don’t leave me with him.”

The corner of his small mouth twisted into a grin. “I don’t want to interrupt your lovemaking.”

I looped my arm through George’s and guided him back to the office. “I found him that way.”

“What you two do behind closed doors is none of my business,” George said.

Movement sounded from inside my office and when we reached the door Derek had managed to crawl his way up from the floor. He covered his privates with his crumpled-up jeans and shirt.

“Just give me a second and I’ll be good as new,” Derek said in his sexy Southern drawl.

George chuckled as he sat behind his desk at the front of the room. He’d been my receptionist for about two months now. We’d met when I’d moved into the house my Aunt Barb had left me. George was my new neighbor. After getting to know George, I’d asked him to come to work for me. Age was only a number to George, and at eighty, he acted more like he was thirty. As a matter of fact, he reminded me a lot of Derek, minus the annoying qualities.

Derek hopped around until he’d managed to shuffle into his jeans. My gaze wandered down to his bare chest and exposed rippling six-pack abs. He ran his hand through his thick blond hair.

I forced myself to look away again. “Like I said, I need to speak with you about your professional conduct. You didn’t come to Vegas to tomcat around, remember? What would your mama think?”

“I did nothing wrong last night. I was a perfect gentleman,” Derek said as he slipped the black t-shirt over his head.

“Your definition of a gentleman is obviously vastly different than mine.” I straightened the framed private investigator license on the wall to avoid looking at Derek.

“Come on, Cece, let your hair down and have a little fun.” Derek leaned against his desk, which, by the way, had absolutely nothing on it.

What did Derek do around here other than give me a headache? Last week he’d moved his desk about twenty feet to the right and now had a clear view of me while I sat at my desk. I was sure he just did it to drive me crazy. I’d thought of casting a spell on him, perhaps to eliminate his cockiness, but my witchcraft skills would never be good enough for a task that grand.

George chuckled again as he pretended to sort through the day’s mail.

When I’d started Cash Detective Agency, my name—Cece Cash—was the only one on the door. Now Derek North’s name was written above mine. It wasn’t enough that he was now my partner, he had to take top billing too. I’d underestimated the funds needed for operating a business.

When my best friend’s brother had offered to provide the extra money I needed, I’d had no idea there were strings attached. He wanted half of my business. At first I’d told him no, but after thinking about it for approximately twenty-two hours and thirty-seven minutes, I’d picked up the phone and reluctantly told him he had a deal. The next thing I knew, Derek had been on a plane from Savannah to Las Vegas.

“I’ll be back in a few.” Derek strolled out the door.

“Now that he’s gone maybe we can get some work done around here.” I straightened my shoulders, raised my head high, and marched into my office.

A couple hours later, I was finishing up a cheating spouse file when Derek strolled through the door with a sly smile on his face as if I hadn’t seen his tallywacker. Or maybe the smile was because I
had
seen it. Either way, there was nothing to smile about. He leaned against the doorframe of my office. At least for the time being I’d been able to keep my own private office in North and Cash Detective Agency.

“Nice nap?” I quirked an eyebrow.

“Listen, about this morning.” He took a sip of his coffee and then continued. “I want to apologize. I should know by now not to drink that much. It never ends well.”

“Yes, obviously it doesn’t end well considering you had no pants and your beans and franks were on full display,” I said.

Derek moved farther into the room, taking a seat on the brown leather chair in front of my desk. “I’m not sure how that happened.” He quirked an eyebrow. “Beans and franks?”

I waved my hand. “I don’t even want to know how you ended up without pants. But I do want to know if you’re taking this job seriously.”

“Of course I’m taking the job seriously, Cece, I wouldn’t be here if I wasn’t.”

I shuffled the files around on top of my desk. “Your actions speak differently.”

Luckily, I’d hidden the spellbook in my desk drawer. After all these years, I’d still been able to keep my witchcraft from Derek. He wouldn’t understand, and he’d probably only crack jokes about growing warts or flying brooms.

He leaned back in the chair and stretched his long legs out in front of him. “Let me explain what happened.”

George opened the door and peeked his head through. “Sorry to interrupt your discussion, but you have a customer.”

Derek and I exchanged a glance. I jumped up and raced for the door, almost tripping on my own feet. Derek dashed around me, beating me to it.

“Don’t screw this up,” I warned with a wave of my finger.

I eyed him up and down. “Well, at least you have pants on this time.”

Sons of the City by Scott Flander
Beware This Boy by Maureen Jennings
16 Lighthouse Road by Debbie Macomber
Emperor of a Dead World by Kevin Butler
Objectify Me: A Fireworks Novella (The Fireworks Novellas) by Rizer, Bibi
After (The After Series) by Todd, Anna
In a Heartbeat by Rita Herron
Lament for a Maker by Michael Innes
Wild At Heart by Vickie McDonough
After the Fire by Belva Plain