Read When I Was You Online

When I Was You 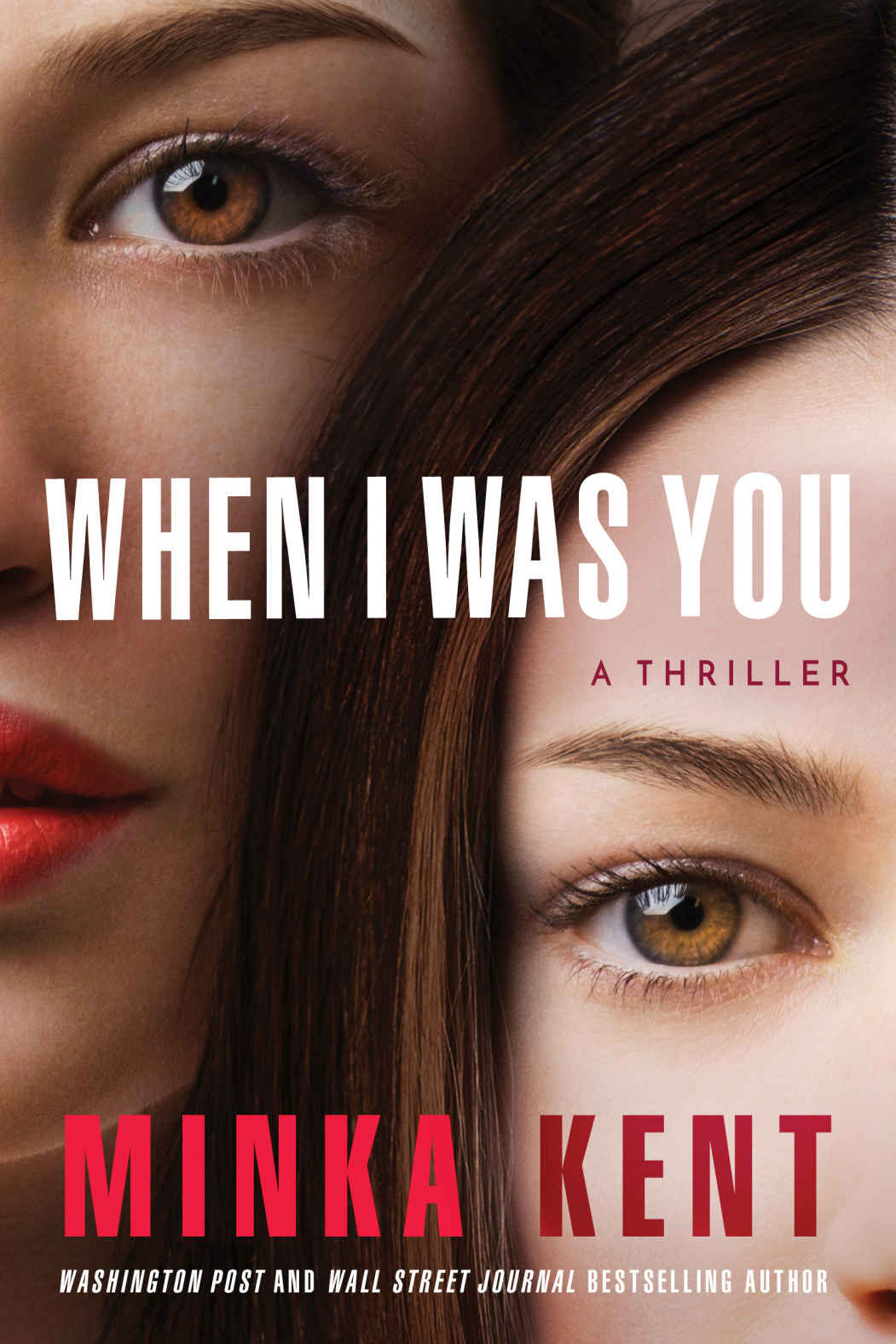 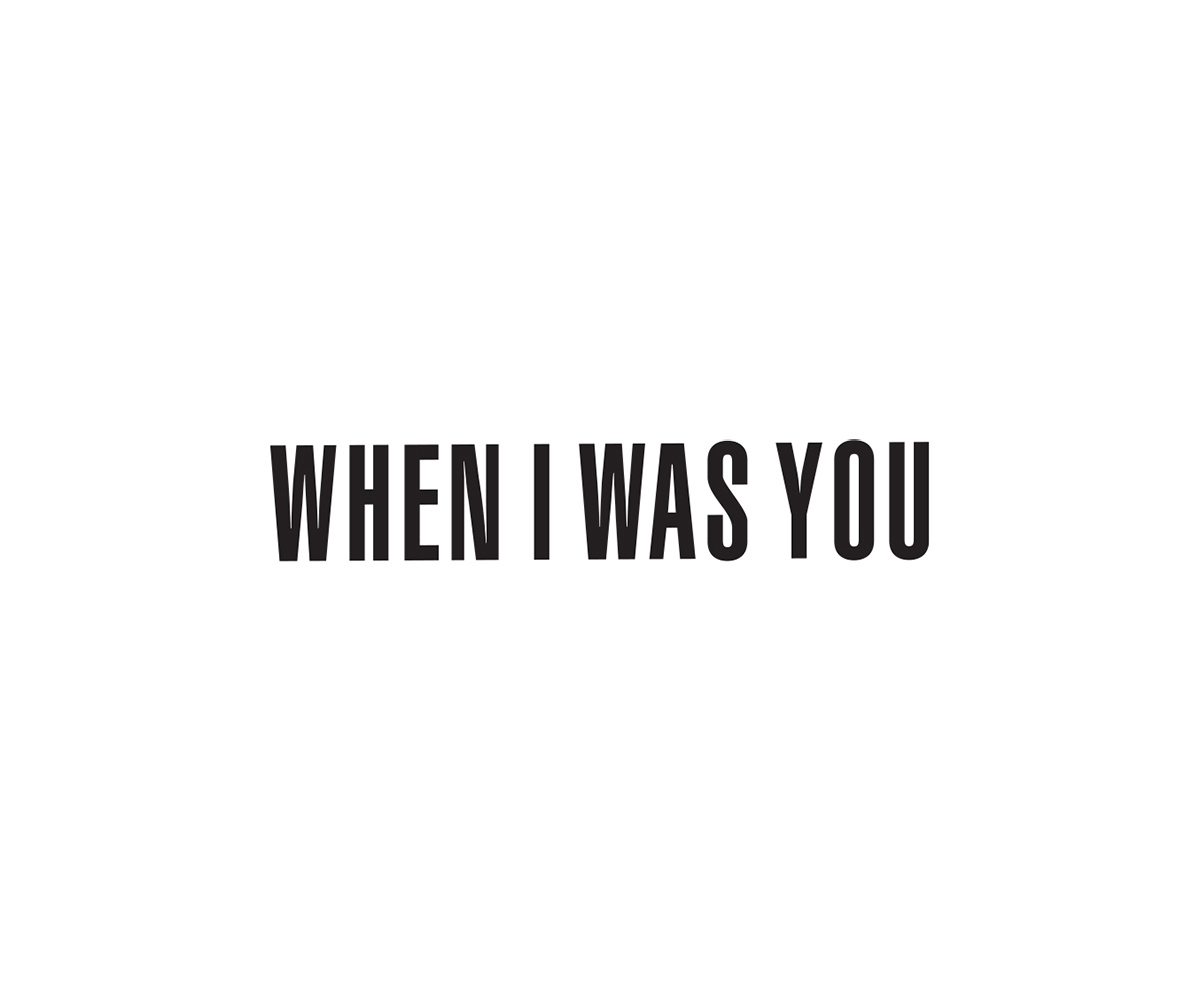 OTHER TITLES BY MINKA KENT 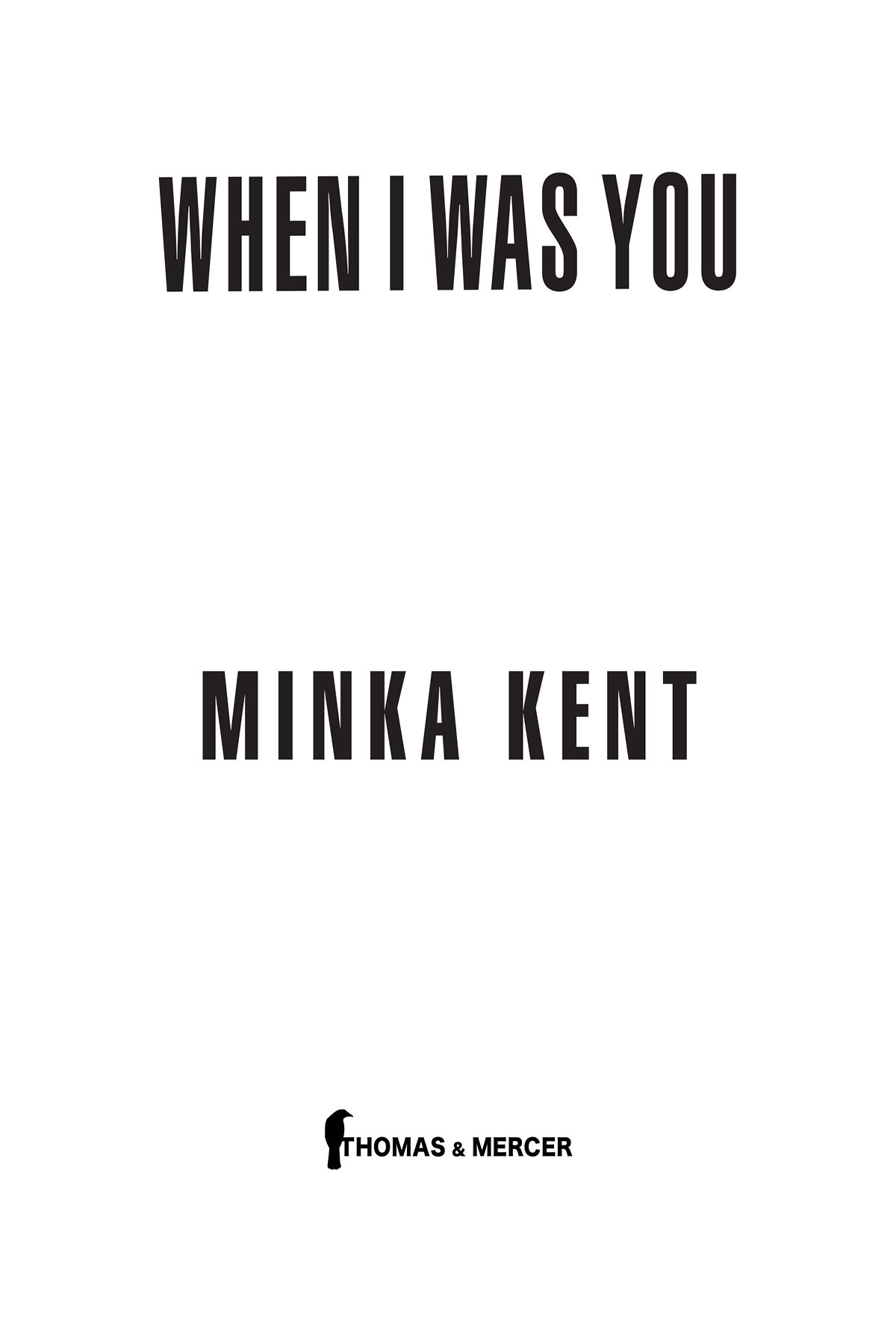 This is a work of fiction. Names, characters, organizations, places, events, and incidents are either products of the author’s imagination or are used fictitiously. Any resemblance to actual persons, living or dead, or actual events is purely coincidental.

For my parents, my biggest cheerleaders then and now.

They told me I was lucky.

The doctors, the nurses, the police officer who found me lying bloody, stabbed, and beaten in an alley outside my office under a moonless sky—all of them said the same thing.
“You’re lucky you didn’t die.”

I could easily draw a line, and on the other side of that line would be the woman I was before the attack. That woman, that version of me exists no more. Is that not the very definition of death?

But I digress because at the end of the day, I’m still breathing. My heart still beats. My veins fill with the stranger’s blood they pumped into me that night. I suppose in many ways I am lucky—OCD, nightmares, and PTSD be damned.

I sit on the front porch swing and watch the world around me come alive on a Tuesday morning, the chill of late spring in the air. I wave at Enid Davies next door as she waters her pink begonias. I smile at the recently retired Klingenbeards, who walk by with their silky golden retrievers. I watch the schoolchildren bicycle down the sidewalk, their oversized backpacks bouncing as they race one another and ride over cracks and curbs.

Shortly after eight, a snow-white Range Rover pulls up in front of Carly and Brian Marshall’s Queen Anne across the street. It’s been listed
eight months now, the asking price ridiculously high. I watch as their real estate agent gives herself a once-over in her visor mirror, smoothing her shiny angled bob and carefully applying two coats of lip balm over her inflated lips before stepping out in her red-bottomed heels and strutting up the front walk. I’m 99 percent sure she’s sleeping with Brian. If she’s not, it’s definitely on her agenda. I’ve never seen an agent make as many midmorning house calls as she does, and I’ve never seen a Queen Anne on this street take more than a handful of months to sell even in the worst of markets.

A moment later, Brian gets the door, and the agent disappears inside. The curtains remain drawn. Life outside goes on. It never fails to amaze me all the things people do when they think no one’s watching, the things they think they can get away with.

Such entitlement, such infuriating audacity.

Like the person who attacked me and left me for dead, running off with my wallet, purse, and watch before disappearing into the night. I still can’t fathom how someone can sneak up behind a person in the dead of night, crack their skull against the side of a brick building, jab a knife through their flesh, steal their valuables, and run back to their life, never giving it a second thought.

At least I assume they don’t give it a second thought.

Bad people don’t sit around thinking about all the ways that make them bad.

If I knew Carly Marshall better, say if we were friends or neighbors who more than waved at one another in passing, I’d mention something to her. Maybe it wouldn’t be my place, but a victim deserves the truth.

We
are the entitled ones.

I’ve spent far too much time observing people these past six months, but it hasn’t been for naught because I’ve learned an invaluable lesson. For the first nearly thirty years of my life, I gave people the benefit of the doubt. I saw the good in them. I waltzed through my days without
ever thinking I would be the kind of poor sap featured on an episode of
Dateline
, allowing a national network to feed my story to its insatiable armchair detective viewers as entertainment in hopes that maybe, just maybe, someone might know something and come forward.

But we got crickets.

And my case went from lukewarm to ice-cold.

Some of us can’t help but be self-serving, letting our egos and ids drive the car as we sit powerless in the passenger seat.

If I dwell too long on these facts, my head begins to throb with the threat of a debilitating headache, and I’ve ruined far too many perfectly good days to let myself ruin yet another.

The Klingenbeards walk past again with their silky blond dogs, giving another wave, which I return with a nod and a smile. A gentle, tepid breeze rustles the trees around us, and a few seconds later, a pair of ladies in monochrome sweats and ankle weights power walk down the opposite side of the road.

The real estate agent emerges from Brian Marshall’s house after a few more minutes, her skirt slightly askew and her hair tucked behind one ear. She climbs into the driver’s side of her SUV, and in a flash, she’s gone.

From my side of the street, I watch as Brian’s curtains pull apart and he lets the daylight in, confirming my suspicions.

Enid’s wind chimes tinkle from her porch next door.

The Halversons’ automatic sprinkler system spits and chugs to life.

Just another beautiful day in the neighborhood.

I take one last look around before heading in, at the sunlight trickling through the century oaks, at the pale, heavy-headed peonies dancing in the breeze, at the neighbors meandering past with their
leashed purebreds, stopping outside the picket fence to admire my late grandparents’ fully restored Queen Anne Victorian. They point at the half-gabled roof and intricate spindle work with pinwheels for eyes, and I imagine they wonder what it might be like to live here—a place so preserved, so untouched by time that it belongs in a museum.

I bet they picture themselves sipping lemonade from the wraparound porch, welcoming guests in the formal entrance at Christmastime, hosting afternoon tea in the rose garden out back with ladies from the Quinnesec Bluff Social Club.

The Queen deserves a family. Truthfully, there are days I feel bad keeping her all to myself.

She’s stuck with Brienne Dougray—a thirty-year-old woman with no need for three-fourths of her. All those beautiful rooms with their antique furnishings, polished walnut paneling, and Pickfair wallpapers locked away for safekeeping.

I have no use for a study, a scullery, or the front parlor—which are mostly just for looking—so I leave them to sit pretty, like dolls on a shelf.

I’d sell the place already, but I don’t have it in my heart to let go of my familiar surroundings, my safe haven. Not yet.

Grabbing the mail on my way in and double-checking the lock behind me, I sort through the stack of letters before coming across a small package with a local return address and the initials HPG as the sender. When I get to the kitchen, I grab a letter opener and slice open one side of the bubble mailer, retrieving a small blue box from the inside. It’s a square-shaped box, glossy blue, and when I remove the lid, I’m presented with a shiny silver key attached to a leather key ring.

I pull the gift out of the box and flip the key ring over, only to find “B.D.” has been embossed into one side in some fanciful script font.

A second later, I notice that a small letter, no bigger than a Post-it note, is attached to the inside lid.

Welcome to the Harcourt! We look forward to your time with us and hope you enjoy your stay in the scenic valley of the Loess Hills.

The Team at Harcourt Property Group

The other side of the note features a glossy photo of a mesmerizingly gorgeous Art Deco–style building, something straight out of an F. Scott Fitzgerald novel, as well as a website address in the lower right corner.

This has to be some kind of scam where they give you a fake key to a time-share, but then when you get there, they make you sit through a four-hour presentation and smooth-talk you into signing your life away.

I place the key back inside the box and set it aside for now, opting to sort through the rest of the mail.

I’ll check into it later.

I’m sure it’s nothing.

It’s forty minutes past six Tuesday evening when my tenant, Niall, gets home. I deliberately delayed fixing dinner in hopes that we could eat together.

I do that sometimes. And he always seems grateful. Besides, I see what he eats when I don’t cook, and it’s usually something along the lines of a turkey sandwich and an apple and strawberry Greek yogurt. Cold things. Quick grabs. Nothing that sticks to the ribs. The man eats like a bird, not a doctor who’s on his feet twelve hours a day. He could use a hot meal every now and then.