Read When You Walked Back Into My Life Online

When You Walked Back Into My Life 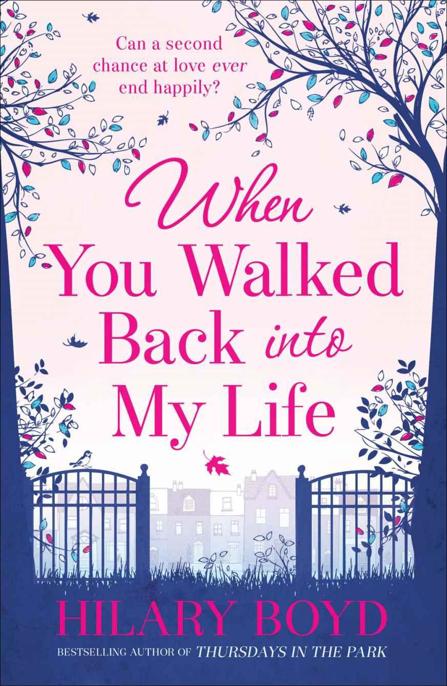 The moral right of Hilary Boyd to be identified as the author of this work has been asserted in accordance with the Copyright, Designs and Patents Act, 1988.

‘One of my favourite summer reads’

‘I was ripping through this … It’s the sort of addictive book you think you might be able to resist. But can’t’

‘Poignant, well observed and wonderfully written, this is a bit of a heart string-puller’

Thursdays in the Park

Hilary Boyd
is a former health journalist. She has published six non-fiction books on health-related subjects such as step-parenting, depression and pregnancy. This is her third novel. She lives in London.

For Don, with forty years of love.

She had slept without meaning to, then woken with a start. As soon as her eyes were open, she automatically tried his mobile number. Again it went to answer. The clock read nearly five-thirty in the morning, and she failed to stop herself imagining the worst: a bike accident, a fall on one of his climbs.

It had been a hurried goodbye, before she went to work the previous day; they’d made love when she should have been getting dressed, and she’d been late.

Her shift at the hospital finished at seven and he’d said he’d be home, that he’d pick up some fresh fish for supper, that he’d fix the lamp on her bike. But he hadn’t been home, wasn’t home now.

She was a nurse in a Brighton hospital A&E, she knew what could happen to people: the blank eyes dulled by the paramedics’ morphine, the twisted limbs, the flesh ripped and jagged, bulging dark with blood.

She thought of all the places he might go – a climber by profession, there weren’t many places he could climb locally. He sometimes went along the coast to the chalk cliffs at Hope Gap. Or the climbing wall if he was teaching. But he’d only taken his pedal bike. The sleek, powerful Triumph was still here, parked in the alley that led to the tiny back garden of their house and shrouded in its metallic-silver cover.

Had he mentioned anything different about his day? She tried to recall his exact words as she hunched inside a rug on the sofa, cold and worried, staring obsessively at the display on her phone, willing it to light up. But she couldn’t remember, the sex had distracted her.

She’d already rung her own hospital to check if he’d been brought in. Should she call the police now? But they wouldn’t do anything, she knew. It was too soon. Too soon for most people, who would assume just a drunken night out. But Fin never got drunk, barely touched alcohol when he was in training, which was most of the time. A bit of dope here and there, but nothing serious. He’d never stayed
out late without her, let alone all night. And he always called or texted her constantly, all day.

In the end she fell asleep again, still clutching her mobile, waking an hour later with the dawn light and immediately checking for a missed call. She knew she’d never concentrate at work so she rang in sick and asked for a second time if someone called Fin McCrea had been brought in overnight.

By teatime she was down at the police station. The constable on the desk took careful details.

‘Has he ever done this before?’ he asked.

‘Never. Not once. We’ve been together eight years and he’s always told me where he was.’

‘And you didn’t have a row or anything?’

‘Nothing.’ She wasn’t going to tell him about the love-making, although it seemed to prove something about their closeness.

‘Have you rung his friends? Family?’

She said that she had: his dad in Scotland, a few climbing mates. He went on asking questions, which she answered mechanically. No, he wasn’t on any medication; yes, his bike was missing; no, she didn’t know if he’d taken his passport.

‘Well, Miss, we’ll make a few enquiries, check the other hospitals. I don’t think you should worry too much. It’s early days. There’ll be a perfectly simple explanation, practically always is.’

The young policeman sucked his teeth. ‘Well, you know the thing… a bit too much to drink and finds himself on a mate’s couch in the back of beyond with no signal; maybe a sudden illness in the family, mobile on the blink …’

Give the man credit, she thought, he’s doing his best.

‘Seen it all,’ he added, giving her an encouraging smile.

‘So what shall I do?’ she asked, on the verge of tears.

‘Go home. Have a good look round, see if he’s taken stuff – his passport, clothes, that sort of thing. Might’ve been called away suddenly. We’ll keep in touch, let you know as soon as we get any news.’ As she turned to go, he called after her, ‘Don’t forget to tell us if he turns up.’

She did as the policeman suggested. At home she went straight to the drawer in the desk where they kept their passports. Fin’s was gone. Then she checked his clothes, searched for the backpack he used for travelling. It was gone too, plus his climbing boots, his favourite Patagonia jacket, his waterproof trousers. She found his computer on the floor beside the bed. Logging in, she checked his emails, brought up his recent history. The emails were from days ago, just brief communications with mates, the usual bike sites, climbing blogs. Nothing that told her his plans – if he had any.

For a while she sat, numb, refusing to face the obvious:
he wasn’t missing, he wasn’t lying at the bottom of a ravine. He’d just gone climbing, left her without a word.

She began inventing excuses for him, just as the policeman had. Perhaps he’d got word of a fantastic climb, leaving immediately – she knew September was the start of the climbing season, post-monsoon, in Tibet – in some inaccessible place on the globe where there was no mobile signal. Maybe at the airport his phone had been lost or stolen and he had no time to call. Or a note gone missing … Had he left a note that had been blown off the table when she opened the door? She looked at once, scrabbling under the kitchen table, then under the bed. It’s barely twenty-four hours, she kept telling herself.

But when she woke the next morning and still her mobile was silent, she recognised her excuses for what they were. What she could not yet face were the implications of his absence.

She went downstairs to make a cup of tea, then punched in the number of the police station.

‘Umm, I’d like to cancel the missing persons report I made yesterday.’ She gave the reference number, feeling humiliated, a total fool.

‘Oh, hello Miss Bancroft. So you’ve found him then?’ She recognised the young PC’s voice.

‘Not exactly, but I think I know where he is.’

The policeman said nothing for a moment.

‘Quite sure. Thank you.’

‘Right you are then, I’ll take it off the system. Let us know if you need any more help.’

She carefully laid her phone down on the kitchen table. With shaky steps, she climbed the stairs back up to bed and crept under the duvet. No tears now. Nor rage. Just nothing, nothing, absolutely nothing.

‘I’m just nipping out to the shops for about forty-five minutes. You’ve got your glasses on, the phone is right here. Will you be OK?’ Flora fiddled with the things on the small side table, placing the phone in the most accessible position, then laid the newspaper across the old lady’s lap, open at a page about Pippa Middleton’s antics. She knew that when she came back the page would not have changed, but Dorothea Heath-Travis, aged ninety-three, liked to maintain the illusion that she read the paper in the morning.

‘I expect I shall.’ Dorothea spoke slowly and carefully – her speech had not completely recovered after her last mini-stroke.

‘Ring me if you need me. Or Keith. Speed-dial one for me, two for Keith.’ Flora said this every morning as she went off to do the shopping, never sure whether Dorothea would remember, if the need arose. In the two years she’d been working there, however, it never had.

The old lady looked up at Flora from her armchair by the window, an amused expression on her face; she hated fuss. But she didn’t reply, just bent her head to the paper, her white hair, thin now, neatly rolled in a small French pleat. The room was quiet, and filled with morning light that showed up the worn chair covers, the faded wallpaper and carpet – all good quality in their day, but not new now for at least fifteen years. Rene Carmichael, Dorothea’s friend, who had power of attorney for the old lady’s affairs, was always tut-tutting about the tatty state of the flat, but Dorothea seemed not to notice or, if she did, not to care.

Flora went through to the hall, taking her cardigan from the coat stand by the front door, and pulling it on over her shapeless, pale-blue uniform dress. She checked herself quickly in the ornate oval mirror on the wall and frowned. Her brown-gold eyes seemed huge in her face, which she knew was too pale, too thin. But it had been one of the wettest summers on record, barely a ray of sun until late July, and she couldn’t afford to go away … had no one she particularly wanted to go away with … Yanking the band from
her ponytail, she allowed her dark hair to fall about her shoulders before scraping it back and off her face again. She preferred not to go out dressed like this unless she had a proper coat to hide the uniform, but she swallowed her pride; it was pointless to change just for a quick trip to the supermarket, and who would see her?

‘Morning, Florence.’ Keith Godly, porter for the block, poked his head sideways from behind his computer.

‘Hi, Keith. Good weekend?’ Flora asked the question without thinking. She knew what the answer would be; Keith never had a good weekend.

The porter, predictably, let out a groan and dropped his voice, flexing his muscle-bound shoulders in his dark suit. ‘Nah. Just same old, same old. Bloody whingeing tenants with leaking toilets or lost keys. That new woman in number twenty-four phoned me three times on Saturday night because a dog was howling his bloody head off somewhere! It was annoying the hell out of me too, but it wasn’t even in our block. Did she think I was fucking Superman?’

Mark of Caine Trilogy: Book One: Hidden in the Shadows (Victorian Villains) by Catherine Lloyd
Two Americans in Paris by Ritt, Julia
A Game Worth Watching by Gudger, Samantha
So 5 Minutes Ago by Hilary De Vries
The Burning of the World: A Memoir of 1914 by Bela Zombory-Moldovan
Addie and the King of Hearts by Gail Rock
Love & the Zombie Apocalypse (Book 1, Zombie Apocalypse Trilogy) by Bellingeri, Chelsea
The God Class: The Third Nick Wolfe Sci Fi Adventure (Nick Wolfe Adventure Series Book 3) by Ross H Henderson
Don't Blink by James Patterson, Howard Roughan
Merrick's Maiden by S. E. Smith