Where the Trail Ends: American Tapestries 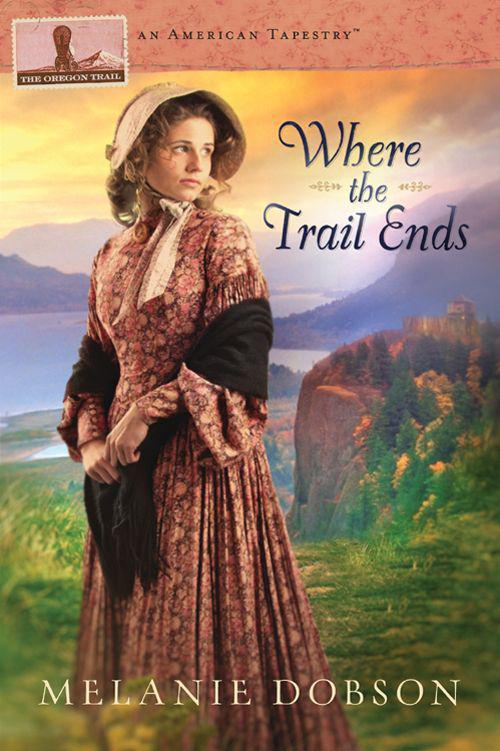 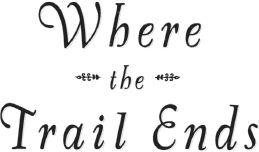 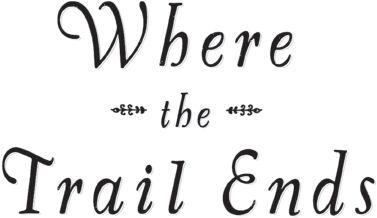 Where the Trail Ends

All rights reserved. No part of this book may be reproduced in any form, except for brief quotations in printed reviews, without permission in writing from the publisher.

Though this story is based on actual events, it is a work of fiction.

Summerside Press
™
is an inspirational publisher offering fresh, irresistible books to uplift the heart and engage the mind.

To my daughter, Karlyn Skye

God has blessed you with such beautiful gifts—
passion, diligence, and determination.

Nothing would have stopped you
from walking the two thousand miles to Oregon.

The pitying stars shone out o’erhead,
On the heartbroken immigrants
Burying their dead.

Over the graves the long train has passed;
The last goodbye has been given,
Till the graves on the trail give up their dead
And we’ll meet in the light of heaven.

Oh, beautiful stars a loving watch keep,
O’er the immigrant trail where our loved ones sleep.

Samantha clutched Micah’s hand, water splashing up both sides of the wagon as their two oxen labored to pull them and the Waldron family belongings across the swift Snake River. The wagon bumped over another rock and listed to the left. She swallowed hard. What would happen if her family’s wagon tipped, as the Baylor family’s wagon did two weeks past?

She’d promised Mama that she would take care of her little brother, but it hadn’t been easy. Micah could swim—Papa had taken him down to the pond several times before they left Ohio—but this current would be too hard for him to fight, the river too wide for him to cross. Micah squeezed her hand, and his words trembled along with his fingers. “Are we gonna tip?”

She steadied her voice. “Papa will take care of us.”

Micah’s hand relaxed in hers.

Their father rode beside them on the one horse they’d purchased for their journey west, yelling at the oxen as he cracked his whip over their heads. During their five months on the trail, Papa had changed from an ordinary small-town lawyer to a passionate horseman and teamster.

They’d all changed, she supposed.

The wagon groaned from the pressure of the current, but she tried to stay calm for Micah’s sake. She wished she could jump off the
wagon bench into the river, to help Papa lead their supplies and livestock to safety. But even if the river were shallow enough for her to walk safely through it, Papa would be angry if she got off the bench, and Captain Ezra Loewe, their hard-nosed wagon master, would be furious.

The captain was still fuming over her last attempt to help. How could she possibly have known that there was an entire family of rattlers lurking in that bush? When she screamed...well, at least their animals hadn’t run very far. And they had eaten the snakes for supper. But instead of making herself a needed member of the Loewe party as she’d hoped, the captain had refused her further offers of assistance.

About a hundred yards ahead of them, Captain Loewe, the handsome Jack Doyle, and most of the other sixteen men in their company worked on the grassy bank, leading teams of oxen and wagons out of the water and up to safe ground. Behind the men lay a small valley with endless brown hills that blended into the horizon. More steep climbs, deep ruts, and rugged volcanic rock for their wagon party to cross with lofty mountains towering around the fringe.

A small part of her wished this current could take her and Micah back east, toward Ohio and all they’d left behind them. She missed Grandma Emma and her cousins, her bed, and the fashionable dresses in her armoire. She missed eating just about anything other than beans, biscuits, and dried buffalo meat. But this journey—it was all a grand adventure, and there was nothing she loved more than an adventure. Mama once told her that she’d grow out of this craving, but she was eighteen now and had yet to outgrow her thirst for all things new.

Something bumped against their wagon, and Micah squeezed her hand again as the waves lapped up on both sides of them. As they lumbered forward, she prayed softly, as Mama would have done, for their safety and their supplies. Papa had caulked the box with pine tar,
but nothing could stop the water from splashing over the top of the wagon box and soaking their food.

She glanced into the box behind her. It was once bulging with burlap bags and barrels filled with wheat, coffee, dried fruit, corn, and beans, but their food supply was rapidly dwindling. The wagon also held bedrolls and canvas for their tent, Papa’s tools, and Mama’s rosewood chest. Vinegar, hardtack, saleratus to make bread, wild onions they’d collected from the plains, loaves of sugar, candles, guns, rope, an ax, whiskey, peppermint oil, and a bottle of laudanum that they’d thankfully yet to use. They’d started out their journey with seventy-five pounds of bacon as well, but they’d had to dump most of it back on the plains when mosquitoes tried to carry it away.

Her brother kept his treasures with him in a knapsack he’d lugged all the way from Ohio. Before they left home, Papa had made it for him out of canvas cloth and wooden pole. When it wasn’t propped over his shoulder, Micah slept with it close to his head or held it tightly on his lap when they crossed the rivers. He wouldn’t let either her or Papa see the contents of what he’d packed.

He was small for his seven years, but sometimes her little brother could be just as stubborn as her and Papa.

Boaz, the Waldron family’s wolfhound, paddled in the water below the bench. If only she could swim in the river alongside her dog and cool her skin as she cleaned off the trail dirt and mud. She wished she could help Micah get cleaned up as well. Her brother’s blond hair was as long as a fur trapper’s—she hadn’t trimmed it since they left Ohio, to protect his neck from the bugs and the sun—and she’d stopped reminding him to wash his hands and face. If Mama were still alive, she’d be appalled to know how filthy her children were at the moment.

She could almost hear Mama reminding her to wash when they got to the other side of the river. With Papa in charge, her mother would never for a moment doubt that they would arrive safely.

Ahead of them, the Kneedler family’s wagon reached the shore. Jack reached out and took the hand of Arthur Kneedler’s elderly wife, helping her climb down from the wagon bench and up the muddy bank. It was late in life for Mr. and Mrs. Kneedler to be starting out in this new territory, but their son now lived in Oregon Country. She’d heard Mr. Kneedler once tell Papa that it was never too late to begin again.

The Kneedlers’ dog scrambled out of the water behind the oxen and rushed up the hill. For some reason Colt wasn’t fond of oxen, but many of them on this journey—animals and people alike—weren’t fond of each other. Those in conflict had learned to tolerate one another for the sake of their company.

Her family’s wagon would be next, the last one to arrive on the safety of the shore.

He groaned. “We had that last night.”

And every night for the past week, since they’d eaten the last of the dried buffalo meat. “We’ll pretend it’s Mama’s oyster stew.”

He looked down at the moccasins Papa had bought him back at Fort Hall. “I miss Mama.”

She put her arm around his shoulders, giving him a quick hug. “Me too.”