Gabe tried to speak, but nothing came out.

“Charlie?” Betty asked for him.

Lester shook his head. “Gone. He just left on that bus.”

Cathy covered her mouth with her hand. “Oh, no. I’m sorry, Gabe.”

Gabe closed his eyes and lowered his chin to his chest. Any hope, any prayer, had just rolled out of his life. Resentment, anger, and heartbreak pushed rancid words past the dryness in his throat. “What did he do, flip a coin, and I lost?”

“No.” Metal chinked on the table. “He told me to tell you to flip your own future.”

Gabe slowly opened his eyes. Two dimes lay on the table; one heads up, the other tails up. He snorted. “A real comedian, isn’t he?” The question came out a low growl.
The hell with you, Charlie Harris
.

“Yeah. You saw it in here when he tossed a dime to decide if you got a tip. Hell of way to live, huh? Leaving all your decisions to chance. Not my idea of planning for the future.”

“Did you ever notice we always won a tip from him, Gabe? Every single time.” She spun a dime on the table. The coin whirled. “Heads.”

Gabe tilted his head at her. She nodded toward the coin. It slowed, tracked a circular line, and fell over. Heads.

Cathy tossed the other coin onto the table. It bounced and rolled. “Tails.” The coin, as if willingly obeying her every command, flopped tails up. She pointed her chin at the coins. “You might want to take a gander at those dimes.”

He snatched up the tails dime. Tails on both sides.

Betty folded her hands on the table and gave Gabe a satisfied, smug expression. “It would appear Mr. Harris never left anything to chance after all, Gabriel. Until now. Which coin would you like, Gabriel? The choice has been left for you to make.”

Burning emptiness scorched his soul and heart. Gabe bolted out the door. He stood on the sidewalk, straining his vision into the thick fog. Even if the bus had still been close enough to see on a clear day, the fog had erased every trace but a lingering scent of diesel fuel. Gabe slapped his hand against his leg.
Damnit
!

A shrill whistle scratched out of the dank cloud surrounding him. A second soon followed.

“Two freighters are doing a whistle pass,” Betty said behind him. “Is that how you intend to leave this, Gabriel? You and Mr. Harris were but two lonely hearts conducting a whistle pass through the fog of your lives?”

He ground a palm heel into his eye to mash the welling tears. “I don’t have any idea where he’s going.”

“Me either,” Lester said. “But that bus he’s on is headed for Charlton
City. Least that’s what was on the display board.”

Cathy walked around Gabe. Pulling him into an embrace, she whispered in his ear, “Charlie’s in for a rough time wherever he goes, Gabe. Anyone with him, well, it won’t be any easier for them, either. But they’d have each other to lean on. My car’s around the corner.”

C
HARLIE
scratched his beard and leaned back in the seat to stare out at the grayness swirling past the window. Ripe as he smelled, the seat next to him would probably stay empty the entire trip to Charlton City. Where he went from there… he hadn’t figured that part out yet. Random drops of moisture beaded and trailed up and back on the glass. He dug the pack of Luckies out of his pea coat pocket, then tapped out the tip of a cigarette. The end between his teeth, he pulled out the cigarette and lit it from a matchbook. He stared at the closed cover: “The Nugget.”

Had it only been a few hours ago? The events already felt as distant as the war in Europe. He stuffed the smokes and matches back in his pocket and looked at the ceiling.

Smoke eased out of his mouth, rose in a spiral, then floated along the metal ceiling. Paper rattled across the aisle. An old man had turned the page of a newspaper.

Charlie chuckled softly and wondered how the codger would react to tomorrow’s headline and photo. Roger Black’s political career was as dead and flat as roadkill. The reporter had shared with Charlie, when they went to speak with Dora, she’d only stated her attorneys were filing for divorce, and any other comment would be through those same attorneys. By the time the
Chicago Trib
got through with the Blacks, Roger’d be broke and in hiding, and there wouldn’t be a business in the country that would want to be tied to old Dora. She’d own a patch of farmland and not much else. If she still owned the land after the Feds got done with her in the ensuing gambling investigation. The nuclear plant would still be built… somewhere. Just not anywhere near Whistle Pass.

He took another drag, then blew it at the recessed ceiling lamp.

And all this success had cost him was pretty much everything. There wouldn’t be a backyard bigot in the country who didn’t have a burning cross with his name emblazoned on it. Eventually, the fuss would die down; the public would find new names to vilify. Maybe then he could go back to the logging camp.

But he still wouldn’t have Gabe.

Gabe was better off in Whistle Pass. Safer. Home was always safer.

Brakes ground and hissed. The bus slowed, only to pull off the highway. Charlie settled in his seat and took another hit off the smoke. Whatever this problem might be belonged to the driver, Charlie’d had more than his share for a lifetime. He rubbed his aching shoulder.

“What the hell do you think you’re doing stopping my bus?”

Charlie chuckled. Somebody had managed to unleash the driver’s ire.

“You see this? It’s a badge. You’re still in my county, so cool your props, Sky King.”

That surly growl he knew. Charlie sat up. The front of the bus had been filled with Lester Fricks. Gabe pushed past Lester and stormed down the aisle, an empty coat sleeve bouncing with each step. Charlie’s breath caught in his chest, right where his heart had stopped.

Gabe flipped a coin off his thumb. The tumbling metal arced over two seats toward Charlie. Charlie reached up and caught the dime. He looked at it and smiled. Heads.

Gabe flopped into the seat next to him. “Want to tell me where you’re headed?”

Charlie shrugged. “I don’t know. Can’t live in big cities. I’d lose my mind. Too trapped. Thought maybe I could find work on a farm or ranch or something. Anything outdoors.”

“Sounds good to me.” Gabe sat back and waved his one free hand. Lester waved back and lumbered off the bus. Keeping his gaze straight ahead, he said, “Lester wanted me to tell you, once he’s sheriff, you’ve got a job anytime you want one.” His eyes turned toward Charlie. “You being a veteran and all.”

Charlie sighed. This might be his dream come true, but Gabe didn’t fully understand what he was getting into.

“It’s going to get rough before it gets easier, Gabe. Maybe you should wait in Whistle Pass.” A smile curled his lips, a smile that Gabe really was willing to walk away from his life—for Charlie. “Besides, you don’t know anything about working outdoors.”

“Nope, I don’t.” Gabe crossed his arm over the one strapped to his chest. “But I know how to keep books, and every business needs bookkeepers. The rest we can deal with together.”

Charlie rubbed the back of his head over the seat. “It could get rougher than Whistle Pass.”

Gabe shifted his body to face Charlie. His gray eyes glistened. “Then we shouldn’t run out of things to talk about. At night. In bed.”

Charlie’s heart smiled as big as his mouth. “You’re really serious about this?”

Gabe nodded. “More than anything, Charlie, I want to spend my life with you.”

A loud hiss rattled metal below them. The engine revved, and the bus pulled onto the highway.

“There’s one little thing I need to know.”

Charlie cocked his head. “What?”

Deep lines furrowed Gabe’s face. “Are you an Indian?”

When not writing, shoveling snow, or mowing their five acres outside Freeport, Illinois, he’s trying to explain to his wife that the TV has more than SOAP and GAME channels, and pizza really is a necessary and required food group. 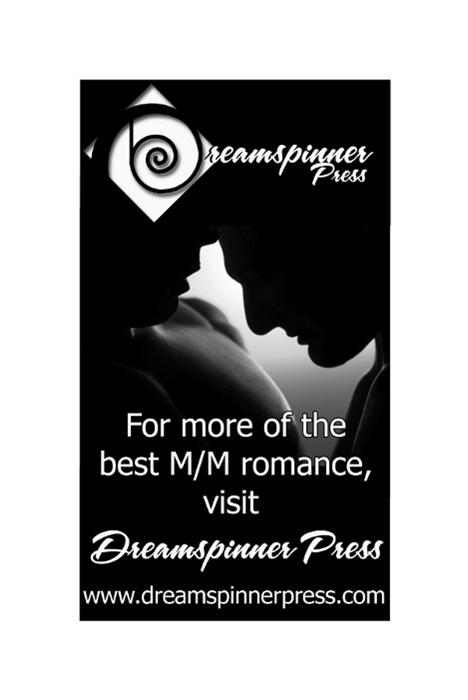