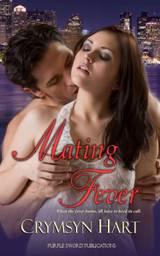 This is a work of fiction. Names, places, characters, and events are fictitious in every regard. Any similarities to actual events and persons, living or dead, is purely coincidental. Any trademarks, service marks, product names, or named features are assumed to be the property of their respective owners, and are used only for reference. There is no implied endorsement if any of these terms are used. Except for review purposes, the reproduction of this book in whole or part, electronically or mechanically, constitutes a copyright violation.

The chill of the night ran along my arms. Every time I drew in a breath the strong gusts stole the air from my lungs. The icy fingers of the night slithered up my skirt and caused my legs to tremble. The sounds of the passing cars and their horns filled my ears. A clacking subway train ran along the street next to me.

I pulled my coat closer to my body to ward off the striking wind. It sliced through the thin material of my clothes. The temperature had dropped while I had been in the office, and I wasn’t prepared for it. Home was only a block away. It was a four-bedroom house that I shared with two other roommates and the fourth was unoccupied at the moment. No matter how much I worked, I wasn’t able to make the rent on my own or buy a house with the rising housing costs in
Boston
the way they were. I got by with two other guys who were trying to "find" themselves.

MacIntyre, or DJ Mac, as he wanted everyone to call him, was off in California on a club tour, but he had left his rent. The other, Sandi, was an aspiring artist this week. Next month he would try rock climbing or some other pastime. We’d all been thrown together by friends of friends who told us about our original roommate Gulliver who had moved back to Jersey.

It was a fucked up world that I lived in. All of my previous relationships had gone to hell. The images of my deceased beaus flashed before my eyes and the horrible ways they had died.

Being the responsible one growing up, to find myself in such a disorganized living situation was a bit strange. Here I was, walking back to the room I called home, wondering if the sink would be full of Sandi’s dishes or if his pot-smoking friends would have enshrouded the house with a haze of hallucinogenic vapor.

When I passed the small package store on the corner that sold alcohol and lottery tickets, I heard a bottle drop in the alleyway. My heart throttled against my chest. Without stopping to see who or what was hiding, I quickened my pace toward home. Before I made a few steps, someone’s hands enclosed my waist and yanked me into the darkness. I was hurled into the brick wall of the package store. My attacker’s face was hidden in the shadow. But the muscular frame and the cut of his ragged clothes told me it was a man. Rancid breath blasted against my face. I curled my nose at it and glanced around for a way to escape. There was nowhere for me to go. His fingers came around my throat and squeezed. I clawed at the hand, but my assailant was too strong. He stepped closer, but a hood was down over his face.

“Please don’t hurt me.” I hated the helplessness in my voice. All my muscles were locked in place, frozen in fear at what he would do to me. The worst rolled through my mind. Rape. Murder. Being chopped up and my body dumped into the
Charles River
.

“Don’t worry. It’ll only hurt for a minute. Then you’ll be one of us.” He wrenched my head to the side. A cry let loose from my lips. His fingers wound through my hair and he pulled out the scarf I wore. My mugger pressed his body against mine. He had no other weapon I could see, but I was trapped. His hot, stinking breath moistened my skin.

“Your kind has got to learn.” Another deep voice rumbled in the alley.

I opened my eyes and felt the man’s lips move away from my throat.

“My master doesn’t obey the laws. Humans are meat,” he snarled.

A guttural growl answered him. “Trenton knows better. His day will come. As yours has now.”

My attacker launched himself off me, pushing me into the wall so my head struck the brick exterior. The world grew a fuzzy around the edges. I tried to move, but my head spun. All I could do was listen to the two men fight next to me. Whoever had come into the alley heaved my attacker into the trashcans and was on top of him, holding him down. My savior raised his arm over his head. There was something large and pointed in his hand that he brought down. A sharp shriek pierced the night that chilled my bones. The scream died as a blast of wind hit me. Then silence.

The world started to return to normal. I was able to stand without the aid of the wall. I rubbed my throat, but my neck hurt from the tight grip. My hero approached. The light next to the alleyway flickered on and off so it was difficult to see. All I could make out was that he was dressed in dark jeans and a fitted t-shirt. His hair was disheveled with strands hanging over his ear. He didn’t seem out of breath, but there were dark spatters on his cheek I could only assume were blood.

“May I check?” He reached for my neck, but I backed away.

“I’m fine. Thank you for your help.” I pulled out my phone, ready to call the cops.

“Why not? I was attacked. Of course I’m going to report it.” I walked closer to the light to get a better look at my phone and to feel a little safer. He stepped in front of me.

“Please don’t.” His tone was firmer. I glanced back at him, and his eyes glowed in the light.

My head grew a little fuzzy, but I shook off the feeling and attributed it to hitting the brick wall. “Sorry. But you’re not the boss of me.” I dialed the police and waited for the operator to answer.

“I wish you hadn’t done that.”

The man rushed forward, plucked the phone from my fingers, and crushed it in his hand.
What the hell? That isn’t normal. No person moved that fast unless I am really out of it
.

“Hey, what did you do that for?” I stood transfixed. Fear trembled my spine as I watched him sprinkle the remains of my phone onto the pavement.

I backed away from the crazed man, hoped to make it to the front of the package store, and then inside so I could have the clerk call the police. I kept my gaze locked on him. Then he disappeared. A breeze brushed past me. Someone clutched my arms from behind. I jumped.

“I won’t hurt you, but you have to listen to me very carefully.”

A low chuckle echoed in the darkness. “Nothing. Just that if you tell anyone about what you’ve seen tonight, I’ll be forced to come back. Then you
will
know what I can do to you.”

He pressed his lips to my throat. The wetness of his tongue trailed along my flesh. A warm tingle spread from the spot and all along my body. I shouldn’t have been reacting to him this way, but I couldn’t help it. I bit my lip to keep from moaning. Conflicting emotions assailed me. I walked a line between fear and the stirred passion that he had awakened in me.

“I’ll make what he was going to do to you seem like a holiday. I have ears and eyes everywhere in this city and beyond. So keep your mouth shut.” He nipped my throat once more and then released me. His words were imprinted into my mind. I spun around to see where he had gone to, but no one was there.

Sirens sounded in the distance, getting closer. I didn’t know if they were in response to my call, but I wasn’t going to stick around to find out. While I searched the darkness, I wondered if he was already watching me. Some part of me said to hide. The instinct blanketed me, and I ran home.

The rest of the night and the next day, I constantly peered over my shoulder to see if anyone was following me. However, on the streets of a big city like Boston, everyone was following me. That didn’t make me feel any better. A scarf round my throat hid the handprint bruise. I told no one what had happened, hardly believing it myself. Some kind of strange dark fantasy had played out before me. Every time I turned my head, I felt the bruise on my neck, and it reminded me that the dark fantasy had occurred.

When I returned home that night, I found a package waiting for me on the table where we laid the mail. No return address grazed the box. Inside was a newer version of my cell phone. I turned it on and found it was already preloaded with my numbers and contact info. It made me wonder if he had kept my SMS card from my old phone. There was no note. Shaking my head, I headed upstairs to get ready to take a bath when the phone rang. The number wasn’t one I recognized.

The high-pitched ring grated on my nerves. After the second ring, I answered. “Hello.”

“Do you approve of your new phone?” His smooth voice sounded over the receiver.

“How did you even get my phone number and address?” My knees went weak from the silky tone. Although the fear he instilled in me froze my bones.

“Now now. You didn’t answer my question. Do you like my gift?”

I peered through the blinds of the downstairs window, scrutinizing the shadows. The darkness didn’t reveal anyone, but that didn’t mean someone wasn’t watching from the small alleys between the houses. Anyone could be hiding inside them. His breaths came evenly on the other end of the phone. I tip-toed around the house looking into corners and closets to see if he might be lurking somewhere inside.