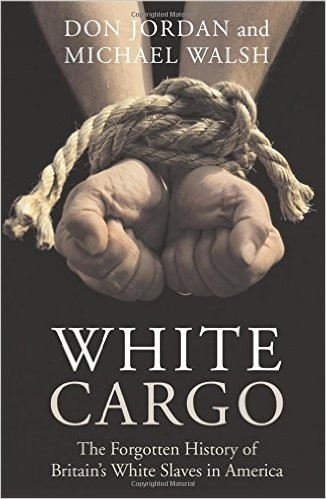 The Forgotten History of

The moral right of the authors has been asserted First published in the U.S.A. in 2008 by

New York University Press books are printed on acid-free paper, and their binding materials are chosen for strength and durability.

Manufactured in The United States of America

IN THE SHADOW OF THE MYTH

A PLACE FOR THE UNWANTED

Elizabethan adventurers dreamed of an American
empire that would give them gold and glory. Others saw
the New World as a dumping ground for England’s
unwanted poor.

A highwayman who became Lord Chief Justice planned
to colonise America with criminals. He began to empty
England’s gaols and set a precedent.

The mastermind behind the first successful English
colony in America was reputedly Britain’s richest man.

He kept a fledgling Virginia going and paved the way
for the first white slaves.

CHILDREN OF THE CITY

The Virginia Company wanted youngsters to work in
the tobacco fields. The burghers of London wanted rid of
street children. So a bargain was struck and hundreds
of children were transported.

The New World was a magnet for the poor. To get there,
they had to mortgage their labour in advance. They
were not to know that they had contracted into slavery
and might well die in bondage.

‘THEY ARE NOT DOGS’

Virginia was run by planters who pushed through laws
that relegated ‘servants’ and ‘apprentices’ to the status
of livestock. Notionally they had rights but planters were
literally allowed to get away with murder.

In the 1630s, almost 80,000 people left England for the
Chesapeake, New England and the Caribbean, most of
them indentured servants. A ruthless trade in people
developed in which even a small investor could make
money.

Untold numbers were kidnapped or duped onto

America-bound ships and sold as servants. The

‘spiriting’ business became as insidious and organised as
the cocaine racket today. Even magistrates took a cut of
the proceeds.

FOREIGNERS IN THEIR OWN LAND

Ethnic and religious cleansing in Ireland became a
model for Native Americans being cleared from the
Chesapeake. During the Cromwell era, still more were
displaced and Ireland became a major source of slaves
for the New World
.

DISSENT IN THE NORTH

Until the 1650s, Scotland fought shy of transporting
its unwanted to any English colony. Then religious
and political dissent were made punishable by
transportation to the Americas. Sometimes more died
on the way than ever reached the New World.

THE PLANTER FROM ANGOLA

The idea that Africans were Virginia’s first slaves is
revealed as a myth through the story of one who became
a planter himself and went on to own whites as well as
blacks.

In the 1640s, Barbados became the boom economy of
the New World. The tiny island’s sugar industry would
outperform all its rivals in profits – and in its ruthless
use of slave labour.

A planter aristocracy emerged in the Chesapeake. Its
members dealt in men, land and influence, creating
dynasties that dominated America for centuries. But
stories of brutality deterred would-be settlers from
emigrating.

The planters’ nightmare of a combined uprising by
blacks and whites came true when a charismatic young
aristocrat turned an Indian war into a campaign
against his own class, the English grandees. Swearing
never again, the grandees set out to divide the races.

Bogus promises of free land persuaded hordes of
Europeans to sell up and leave for America. They began
a nightmare journey that left some so impoverished they
sold their children to pay the fare. But some outfoxed
their exploiters.

DISUNITY IN THE UNION

Scottish clansmen were sold as servants in the Americas
while their chieftains were allowed a comfortable exile
in France – two different fates for Jacobites after 1715.

Merchants made fortunes selling the clansmen in six
different colonies.

The tide of kidnapping continued under the

Hanoverians. In two famous instances, victims
returned, as if from the dead, to denounce their
abductors. One claimed to be heir to an earldom,
kidnapped by the man who stole his birthright.

After 1718, England subsidised the convict trade and
America was deluged with British jailbirds. Paranoia
grew, with soaring crime rates and epidemics blamed on
convicts. Only employers were happy: a convict servant
was half the price of an African slave.

Having won their liberty in the War of Independence,
Americans had no intention of allowing their country
to serve as a penal colony ever again. Britain had other
plans and an astonishing plot was born.

IN THE SHADOW OF THE MYTH

Slavery they can have everywhere. It is a weed that grows in every soil.

That man who is the property of another, is his mere chattel, though he continue a man.

– Aristotle,
A Treatise on Government

In the summer of 2003, archaeologists excavated a seventeenth-century site outside Annapolis, Maryland, and discovered the skeleton of a teenage boy. Examination showed the boy to have died sometime in the 1660s. He was about sixteen years old and had tuberculosis. His skull showed evidence of a fearful mouth infection, and herniated discs and other injuries to his back were synonymous with years of hard toil.

The youth was neither African nor Native American. He was northern European, probably English. His remains were found in what had been the cellar of a seventeenth-century house, in a hole under a pile of household waste. It was as if the boy was of so little account that after he died he was thrown out with the rubbish.

to describe hundreds of thousands of men, women and children shipped from Britain to America and the Caribbean in the 150

years before the Boston Tea Party in 1773. Most of these servants paid their passage to the Americas by selling the rights to their labour for a number of years. Others were forcibly exiled and sold in the colonies as servants for up to fourteen years. Many were effectively enslaved.

While the Spanish slaughtered in America for gold, the English in America had to plant for their wealth. Failing to find the expected mineral riches along the eastern seaboard, they turned to farming, hoping to make gold from tobacco. They needed a compliant, subservient, preferably free labour force and since the indigenous peoples of America were difficult to enslave they turned to their own homeland to provide. They imported Britons deemed to be

‘surplus’ people – the rootless, the unemployed, the criminal and the dissident – and held them in the Americas in various forms of bondage for anything from three years to life.

This book tells the story of these victims of empire. They were all supposed to gain their freedom eventually. For many, it didn’t work out that way. In the early decades, half of them died in bondage. This book tracks the evolution of the system in which tens of thousands of whites were held as chattels, marketed like cattle, punished brutally and in some cases literally worked to death.

For decades, this underclass was treated just as savagely as black slaves and, indeed, toiled, suffered and rebelled alongside them.

Eventually, a racial wedge was thrust between white and black, leaving blacks officially enslaved and whites apparently upgraded but in reality just as enslaved as they were before. According to contemporaries, some whites were treated with less humanity than the blacks working alongside them.

Among the first to be sent were children. Some were dispatched by impoverished parents seeking a better life for them. But others were forcibly deported. In 1618, the authorities in London began to sweep up hundreds of troublesome urchins from the slums and, ignoring protests from the children and their families, shipped them to Virginia.1 England’s richest man was behind this mass expulsion.

It was presented as an act of charity: the ‘starving children’ were to 12

be given a new start as apprentices in America. In fact, they were sold to planters to work in the fields and half of them were dead within a year. Shipments of children continued from England and then from Ireland for decades. Many of these migrants were little more than toddlers. In 1661, the wife of a man who imported four

‘Irish boys’ into Maryland as servants wondered why her husband had not brought ‘some cradles to have rocked them in’ as they were ‘so little’.

A second group of forced migrants from the mother country were those, such as vagrants and petty criminals, whom England’s rulers wished to be rid of. The legal ground was prepared for their relocation by a highwayman turned Lord Chief Justice who argued for England’s gaols to be emptied in America. Thanks to men like him, 50,000 to 70,000 convicts (or maybe more) were transported to Virginia, Maryland, Barbados and England’s other American possessions before 1776. All manner of others considered undesirable by the British Crown were also dispatched across the Atlantic to be sold into servitude. They ranged from beggars to prostitutes, Quakers to Cavaliers.2

A third group were the Irish. For centuries, Ireland had been something of a special case in English colonial history. From the Anglo-Normans onwards, the Irish were dehumanised, described as savages, so making their murder and displacement appear all the more justified. The colonisation of Ireland provided experience and drive for experiments further afield, not to mention large numbers of workers, coerced, transported or persuaded. Under Oliver Cromwell’s ethnic-cleansing policy in Ireland, unknown numbers of Catholic men, women and children were forcibly transported to the colonies. And it did not end with Cromwell; for at least another hundred years, forced transportation continued as a fact of life in Ireland.