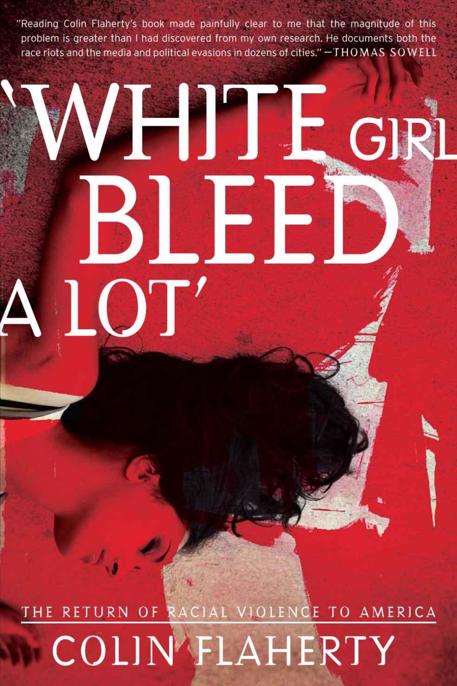 THE RETURN OF RACIAL VIOLENCE TO AMERICA

All rights reserved. No part of this book may be reproduced in any form or by any meansâ€”electronic, mechanical, photocopying, scanning, or otherwiseâ€”without permission in writing from the publisher, except by a reviewer, who may quote brief passages in a review.

MESSAGE FROM THE AUTHOR

Throughout this book, you are going to see some odd little
symbols that look like they came from a Mayan temple.
These are the most important part of the book!

These symbols will take you to the videos that made this
book possible! Because without videos, no one would believe
that racial violence is as bad as it is.

Download the
Scan
app on your smartphone for free. Then, open the app, point the camera at the code and youâ€™re done! No need to take a photo or press a â€œscanâ€ button.

*In order to use
Scan
, your device must have a built-in camera. When scanning codes that redirect to online content (such as websites), you will need Internet connectivity.

INTRODUCTION:
Thereâ€™s a Riot Going On

4 They Chose the Wrong Guy

10 Confessions From a Network News Desk

14 Confessions From a News Desk, Part 2

29 Granny Get Your Gun

39 We Get Letters From Reporters

APPENDIX:
Find Your Own Race Riots

INTRODUCTION
THEREâ€™S A RIOT GOING ON

Racial violence is exploding across the country. Cops deny it.
Newspapers do too. Thank God for YouTube.

R
acial violence is back.

In hundreds of episodes across the country since 2010, groups of black people are roaming the streets of America intimidating, stalking, vandalizing, stealing, shooting, stabbing, raping, and killing. But the local media and public officials are largely silent about the problem. Crime is color blind, says a Milwaukee police chief.
1
Race is not important, a Chicago newspaper editor assures us. That denies the obvious: America is the most race conscious society in the world. We learn that fact every day from black caucuses, black unions, black ministers, black teachers, black music, black art, black poets, black salon owners, black public employees, black names, black police officers, and black media. We learn it in stories written by members of the National Association of Black Journalists.

We talk about everything black except black mob violence and lawlessness. That is taboo. And the result is that few know about it. Fewer still are talking about it. Today it is at epidemic levels in almost every city in the country. More than ninety cities
have been under attack. Some cities have suffered dozens of attacks in the last two years alone. The list of cities under attack is long and getting longer:

Peoria, Illinois? Absolutely. As many as nine race riots occurred in 2011 alone right in the heart of Middle America, including â€œa large-scale illegal fireworks display in a housing complexâ€ that turned into a riot.
3

Milwaukee? Yes, on the Fourth of July 2011. After looting a nearby convenience store, a crowd of nearly one hundred blacks set upon some white teens on a picnic. After beating one white woman, a black woman noted â€œOh white girl bleed a lot.â€ At the
Milwaukee State Fair, in what was probably the most explicit and public hate crime in years, hundreds of black people roamed the fairgrounds targeting white people for violence.
4

You didnâ€™t hear about that? Then you probably did not hear about the biggest race riot in America: Black Beach Week every Memorial Day in Miami Beach.

Along with the violence, it is amazing how often the videos feature laughing and mocking that would never make it into a movie script because it is too pathological to believe. Truth is stranger than fiction, because truth does not have to make sense.

In August 2011 on a porch in Wilmington, Delaware, ten black men beat a delivery man unconscious. While they laughed. I was only 200 yards away at the time and would have heard the incident had I not been sitting next to a fan. Two months before, a dozen black people attacked joggers with tear gas at Brandywine River Park. A few weeks later, a mob of twenty black people surrounded a bicyclist, knocked him down, and stole his bike. But since only four people actually put their hands on the cyclist, the local newspaper said only four people were involved. This kind of math happens a lot.
5

A few weeks after that incident, ten black people attacked a minister. He was left dazed and confused, not just by the attack but also since his church had done so much to promote racial harmony. A year later, a black mob attacked another delivery driver. It was three doors down from my house and right in front of the homes of two police officers.

That is just a glimpse at the racial violence in one small town.

Almost as astonishing as the widespread racial violence is the willingness of people in authority and the media to deny it, ignore it, explain it away, condone it, and even fib about it.

I know thatâ€™s a big accusation, but Iâ€™ll back it up.

In Chicago, after weeks of racial violence and weeks of the newspapers refusing to mention the crime was exclusively black mobs rampaging through the downtown, the superintendent of the police said he figured out who was to blame for gun violence: Sarah Palin. A year later he blamed the â€œpilgrims.â€

Yes, that is what he said, and I explain more in
chapter 8
.

Congressman Bobby Rush said black violence in Chicago was routine and the only reason anyone was paying attention to it was because it was black on white violence. This is a theme heard in Rochester, Washington, D.C., and dozens of other places. â€œWhatâ€™s the big deal? This has been happening a long time in black neighborhoods.â€
6

Congressman Rush is probably right, which means this problem is hundreds of times worse than we think. In the Milwaukee July 4th incident, the police refused to take reports or make arrests. For all intents and purposes, it would never have existed if not for some of the victims coming forward and demanding action.

According to
The New York Times
, the 2010 riots on the streets of South Philly had â€œno racial componentâ€ and were â€œnothing much,â€ said the mayor at first. Then events forced him to acknowledge the obvious: groups of black people were taking racial violence to a new level.
7

A dangerous level with greater frequency.

Itâ€™s not just the media that is reluctant to connect the dots of the racial element behind the violence. Even many victims do not like to talk about the race of their attackers. Some are flat out afraid. Violent crime will do that to you. In Philadelphia, one victimâ€”mentioned laterâ€”said talking about the race of her attackers was â€œcreepy.â€ Her friends say pointing it out is â€œracist.â€ In Milwaukee, another victim said it would be too divisive. In Springfield, Illinois, football fans accused a mom of being racist after she demanded justice for her son after he was almost killed at a party thrown by a black fraternity and attended by members of the football team.
8

Follow Me by Joanna Scott
Busman’s Honeymoon by Dorothy L. Sayers
Could This Be Love? by Lee Kilraine
Based: A Stepbrother Romance (Extreme Sports Alphas) by Hamel, B. B.
My First Hundred Years in Show Business: A Memoir by Mary Louise Wilson
Bound By Darkness by Alexandra Ivy
An Afghanistan Picture Show: Or, How I Saved the World by William T. Vollmann
Walk in Darkness - A Thriller (Jon Stanton Mysteries) by Methos, Victor
The Cast Stone by Harold Johnson
Spellbound by Blake Charlton