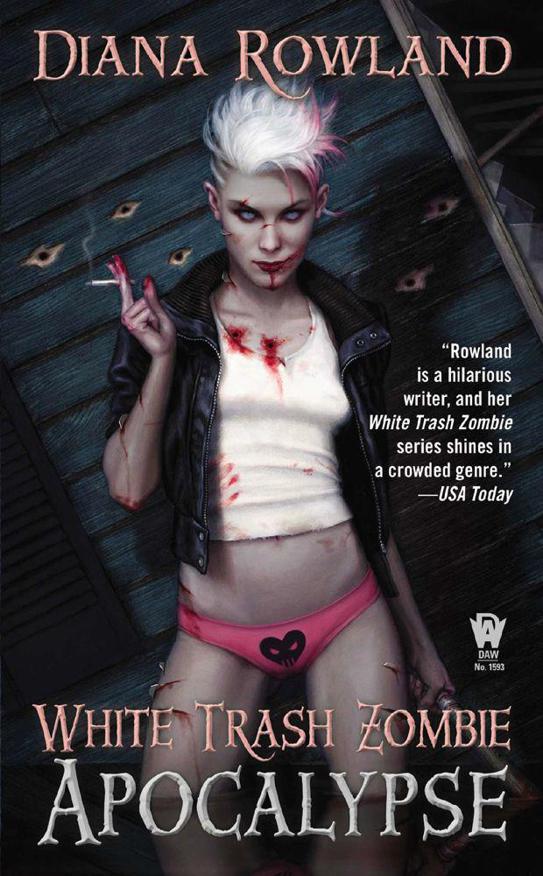 Raves for
Even White Trash Zombies Get the Blues
:

“If you missed
My Life as a White Trash Zombie
, Rowland’s truly wonderful series starter about new zombie Angel Crawford, be sure to rectify that mistake and also pick up the next chapter about this amazingly engaging heroine. Rowland has come up with a perfect blend of creepy, scary, yet emotionally touching adventures for her gutsy and endearing heroine. Angel’s evolution from depressed loser to young woman learning to trust her instincts is entertainment at its best. Do not miss out on this exceptional series!”

“So far, this has been an incredibly fun series, and a breath of fresh air in an increasingly crowded field. While there’s no denying that the basic premise is fascinating and entertaining, the real draw here is Angel’s personal journey of growth and self-discovery.…Angel’s a heroine worth cheering for.”

“If you haven’t discovered this series, you’re in for a treat. Angel is one of my favorite heroines in urban fantasy right now, and I can’t wait to see what she’s up to next!”

And for
My Life as a White Trash Zombie
:

“An intriguing mystery and a hilarious mix of the horrific and mundane aspects of zombie life open a promising new series from Rowland.…Humor and gore are balanced by surprisingly touching moments as Angel tries to turn her (un)life around.”

“Rowland’s delightful novel jumps genre lines with a little something for everyone—mystery, horror, humor, and even a smattering of romance. Not to be missed—all that’s required is a high tolerance for gray matter. For true zombiephiles, of course, that’s a no brainer.”

“Every bit as fun and trashy as the brilliant cover. The story is gory and gorgeous with plenty of humor and a great new protagonist to root for. There is also a tightly written murder mystery too that shocked me by the end. No word yet on the next book in the
White Trash Zombie
series, but I’m already feeling the Hunger.”

SECRETS OF THE DEMON

SINS OF THE DEMON

TOUCH OF THE DEMON

FURY OF THE DEMON
*

MY LIFE AS A WHITE TRASH ZOMBIE

EVEN WHITE TRASH ZOMBIES
GET THE BLUES

All resemblance to persons living or dead is coincidental.

The scanning, uploading and distribution of this book via the Internet or any other means without the permission of the publisher is illegal, and punishable by law. Please purchase only authorized electronic editions, and do not participate in or encourage the electronic piracy of copyrighted materials. Your support of the author’s rights is appreciated.

Nearly all the designs and trade names in this book are registered trademarks. All that are still in commercial use are protected by United States and international trademark law.

For Jack and Anna

This book would not be possible without a great deal of help and support.

Rain. Lots of it. Not yet, but soon. I hadn’t heard a forecast, and I sure as hell wasn’t psychic, but I’d lived in southeastern Louisiana all my life and felt the coming downpour in my bones. Of course, the really dark, ominous clouds helped a bit too.

But that was nothing. Not with zombies roaming the streets of Tucker Point.

Several shuffled along the sidewalk, and a dozen or so huddled together, gruesome and shabby, in front of the Sundown Café, one taking a drag from a cigarette through cracked and bloody lips. Apart from the nearby movie crew, the cigarette was a sure sign these were zombie wannabes and not the real thing.

No self-respecting zombie would be caught dead smoking.

Caught dead
. I snorted. But the truth was that zombies were some of the cleanest-living people I knew. Had to be since anything bad for you, like cigarette smoke, drugs, or alcohol, used up precious brains to detoxify the body. And if you didn’t get more brains quickly, you’d
start to rot. Not fun. I’d been a pill-popping alcoholic smoker before I was turned. Now the most toxic substance I consumed was coffee.

Well, mostly. Every now and then I still took a quick drag for old times sake.

I drove slowly, watching with roll-my-eyes amusement as the crew filmed a couple of fake zombies shambling after a shotgun-wielding woman. No stereotypes here. No sirree.

The majority of the movie-related activity seemed to be taking place at the back of Tucker Point High School, where school had let out for the summer a week earlier. A couple of eighteen-wheelers were pulled up in the lot on the side, and I saw movie people and equipment all over the blocked-off street ahead as well as on the school grounds to the left.

The cop at the end of the street pulled the barricade aside without my having to flash my badge. My Coroner’s Office van was plain black with no markings, but he’d probably been on enough death scenes to know the routine well enough to expect me. His face registered recognition, and he gave me a friendly wave as I passed through. I gave a polite hand lift in response but had no clue if I’d ever seen him before. It was probably a lot easier for cops to remember the scrawny little blond chick who worked as a bodysnatcher for the Coroner’s Office than for me to remember one cop’s face in a sea of identical uniforms.

I proceeded slowly, trying to get a good look at the movie hoopla without obviously gawking or running into anything. Parked against the curb about a half block down was a white SUV with
St. Edwards Parish Sheriff’s Office Crime Scene
emblazoned across the side, and right behind it the black Dodge Durango that belonged to Derrel Cusimano, the death investigator I was partnered with.

As I parked behind the Durango, a tall woman with
brunette hair bound up in a severe bun and wearing a sheriff’s office t-shirt walked up to the SUV. Maria, a crime scene tech. As I climbed out of the van, she gave me a smile and a thumbs up to let me know she was finished with her work. I returned the smile and gave an acknowledging wave. With rare exceptions, a crime scene tech had to take photos and process any death scene in case there was a need later on to review the specifics. The actual removal of the body came last, after the techs did their stuff and the detectives had a good look at everything. I’d been collecting bodies from all sorts of death scenes for a while now, so I was pretty used to the routine. The techs appreciated that I stayed out of their way while they worked, and in return they let me know the instant I could get on with my own business.

I moved to the back of the van, pulled the stretcher out, and lumped a body bag and a couple of sheets on top, then looked around for my hard-to-miss partner, a big, bald, black guy with muscle to spare. He’d been an LSU linebacker ten or so years back and still looked every bit the part.

I spied him striding across the street toward me with a notepad in his hand. He’d probably been here a while already, gathering information, taking notes, and speaking to detectives and witnesses.

“Perfect timing,” he said after he reached me. “Maria finished processing the scene only a couple of minutes ago.”

“Yep, she gave me the go-ahead,” I replied, then swept my gaze around the area with its bustling activity. Crew members carted fancy equipment here and there, men and women scrambled over set pieces, painting, nailing, clamping, and cutting. A man with deep lines of stress around his eyes consulted the stack of papers on his clipboard and gave instructions—accompanied by a lot of arm waving—to the crew. Apart from the one
scene with the shotgun, there wasn’t any actual filming going on in the blocked-off street, but the behind-the-scenes stuff made up for it. And there were fake zombies everywhere. Only about ten or so wore full makeup, but the rest sported the equivalent of spray-on tan, except instead of Sun Kissed Bronze it was Decay Grey.

Derrel’s mouth twitched. He knew perfectly well I wasn’t talking about the body I’d come to pick up.