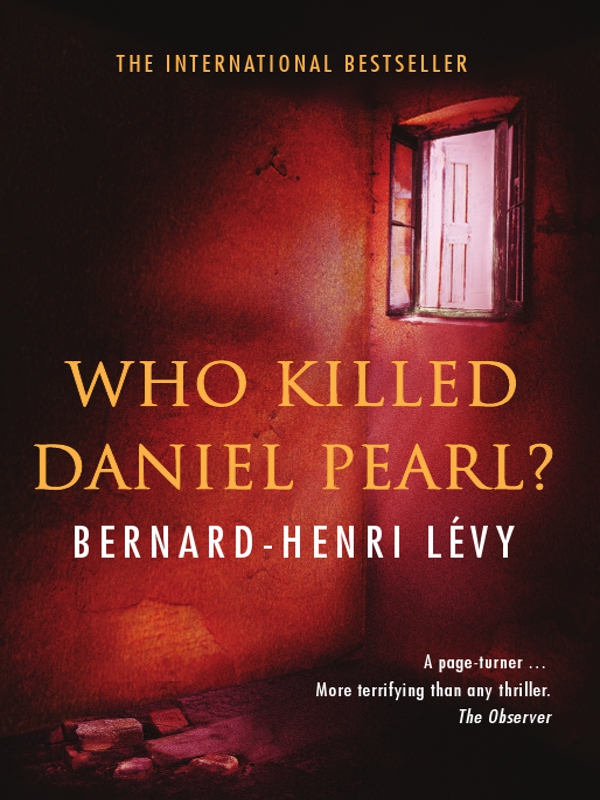 Bernard-Henri LÃ©vy is France's leading philosopher and one of the most esteemed and bestselling writers in Europe. He has also served on diplomatic missions for the French governmentâmost recently, to Afghanistan after the fall of the Taliban. He first wrote about the region in 1971, as a war correspondent covering the conflict between India and Pakistan over Bangladesh. The first of his 30 books,
Red India
, was about that conflict.

James X. Mitchell is a screenwriter and translator living in Paris.

This edition published in 2004

All rights reserved. No part of this publication may be reproduced,
stored in a retrieval system or transmitted in any form by any means,
electronic, mechanical, photocopying, recording or otherwise, without
the prior written permission of the publishers and copyright holders.

Originally published in the French by Editions Grasset & Fasquelle 2003

Typeset by Pauline Haas, Girl's Own Graphics
Printed and bound in Australia by Griffin Press

CHAPTER 1
A NIGHT IN KARACHI

CHAPTER 5
WITH THE PEARLS

CHAPTER 1
IN THE EYE OF THE ASSASSIN

CHAPTER 5
FROM ONE PORTRAIT, ANOTHER

CHAPTER 6
RECONSTITUTION OF A CRIME

CHAPTER 4
THE DOUBLE LIFE OF OMAR

CHAPTER 5
WHEN THE KILLER CONFESSES

CHAPTER 6
IN THE DEMON'S LAIR

CHAPTER 1
RETURN TO THE HOUSE OF THE CRIME

CHAPTER 2
THE MOSQUE OF THE TALIBAN

CHAPTER 4
AT THE HEART OF DARKNESS

CHAPTER 6
BAD OMENS FOR THE INVESTIGATOR

CHAPTER 1
A FELLOW OF NO COLLECTIVE IMPORTANCE

CHAPTER 2
THE MAN WHO KNEW TOO MUCH

CHAPTER 3
IN THE FOOTSTEPS OF DANIEL PEARL

CHAPTER 4
THE ASSASSINS ARE AMONG US

CHAPTER 5
THE BOMB FOR BIN LADEN?

This book begins 31 January 2002, the day of the death of Daniel Pearl, the American journalist kidnapped, then decapitated, in Karachi, by a gang of religious madmen.

I will say, when the time comes, where, and in what circumstances, I was when I saw for the first time the image of his decapitation.

I will tell how and why I decided that day, though I didn't know the man, to take the time necessary to grasp the mystery of his death.

The investigation lasted one year.

It took me from Karachi to Kandahar, New Delhi, Washington, London, and back to Karachi.

This is the story.

It is the account of his investigation, of his search for the truth, that is the material of this work: as raw as possible; as close as I can to what I saw and experienced; the role of doubt and that of conviction; the dead-ends and small steps forward; the true and false witnesses; those who talk because they know you know; the hidden actors who confide their part of the secret or, on the contrary, mislead you; the moments when the hunter, the investigator, has the impression of being the hunted; fear like an ominous feeling or fair warningâthe fear without which the report fails to convey the atmosphere of the gray areas, of shadows in stark light, typical of dubious places; the facts, only the facts, and, when the real was not available, some involuntary part of the imaginary looms.

The first subject of this investigation was, of course, Pearl himself.

The enigma of those “gentle men” of whom Dostoyevski speaks.

The life of this fine journalist, an American and a Jew, but who was many other things as well: a citizen of the planet, a man curious about other men, at home in the world, friend to the forgotten, living life to the fullest, standing in solidarity with the downtrodden, detached and engaged, generous and irresistibly optimistic; a luminous character who made it his duty, if needed, to think counter to himself; he was a man who had chosen to answer evil with good and, above all, to understand.

A chronicle of this death.

If there was enough in the investigation he was conducting to explain that they should want him silenced and killed.

Begin again, from the evidence he left, and in a sense in his place, the investigation that cost him his life.

Retrace his steps. Find, from Islamabad to Karachi, the trail of this man who unwittingly entered a world of darkness. Walk like him. Observe like him. Try to think like him, to feel what he felt, and so to the very end, the instant of death and what he lived in that instantâone year to try to reconstruct the instant of the death of a man I have never met.

Then, there are the others, those who assassinated him, and one in particular, the brains behind the crime, Omar Sheikh.

The dread this individual inspires.

The horror of his hatred of everything humane.

But also, as with his victim, my stubborn will to understandâthe will to enter, not into his reasons, but into his passion, his glacial delirium, the way he lives and reacts, the way he wanted and prepared his crime.

Chemistry of a murderous vocation.

Not the devil in the mind, but in the mind of the devil, to try to fathom something of this assassin's torment of which others before Pearl were victimsâand which others after him, alas, will be.

How does it work, in this day and age, the demonic?

What happens in the soul of a man who, without reason,
in cold
blood
, chooses to espouse evil, to aim for the absolute crime?

What is it that, in the start of this century, makes the abject become desire and destiny?

Who are these new possessed who think anything is permitted, not because God doesn't exist, but precisely because He exists and this existence drives them to madness?

Extreme disgust and the will to understand.

And then, finally, their world.

This world which is also ours and in which the atrocious death of Daniel Pearl was possible.

This unknown world, without points of reference, whose gestation I have never, for the past ten years, tired of observing, between forgotten wars, the Bosnia engagement and the
Rapport Afghan;
a world whose new compartments the Pearl affair, with all it implies and everything it puts into play, with its unexpected ramifications, has allowed me to discover.

This world of radical Islam with its codes and passwords, its secret territories, its nightmare mullahs breathing madness into souls, its minions, its field marshals.

The universe of the new terrorism and, in particular, bin Laden, who we shall see had his place in this story and whose shadow, dark mystery, weapons of subtle or mass destruction, comings and goings, necessarily haunt these pages.

And then these questions: the clash or not of cultures; one Islam or two; how can the Islam of light triumph over this cadaver-hungry God, grinding bodies and souls in the crucible of a distorted law; are the cold monsters of today still States? What response to hatred when it is the cement of a country adrift? What defense against theological politics fired white-hot? Is the spirit of crusade and the combat against the “Axis of Evil” the appropriate response? Must we resign ourselves to the fact that the failure of the Universal, the global will for vengeance, the regression, are the only echo to the affliction of the soul?

If this book began at the beginning of the year 2002, the fact is that it ended in April 2003, in the middle of the Anglo-American war in Iraq.

Completing it, I understand better why this war, from its initial premises, inspired in me such a feeling of malaise.

It is certainly not that I am a pacifist.

It is not that I am less sensitive than others to the idea of seeing the Iraqi people, who were dying a slow death forgotten by the world, delivered from their tyrant.

But there I was, returning from that other world. During the entire time of the debate over the question of the priority of overthrowing Saddam and whether the planet's fate was at stake in Baghdad, I was in the black hole of Karachi. And I couldn't, and still can't, help imagine that this war in Iraqâbeyond its human and political costs, beyond the civilian deaths and the new spin it will give to the wicked wheel of the war between civilizationsâattests to a singular error of historical calculation.

A regime already largely disarmed while in the depths of Pakistan's cities, nuclear secrets were traded.

A tyrant in his autumn, a phantom of 20th century history, while, back there in Karachi, tomorrow's barbarous configurations were being concocted.

Waiting for You (RightMatch.com Trilogy) by Shay, Kathryn
The Gryphon Project by Carrie Mac
Killing Me Softly by Marjorie Eccles
Project 17 by Laurie Faria Stolarz
Stand by Your Manhood by Peter Lloyd
Kiss of Death by P.D. Martin
A Fine Passion by Stephanie Laurens
Winterspell by Claire Legrand
Her Husband’s Lover by Ellis, Madelynne
Trouble in Texas by Katie Lane