Read Why Beautiful People Have More Daughters: From Dating, Shopping, and Praying to Going to War and Becoming a Billionaire–Two Evolutionary Psychologists Explain Why We Do What We Do Online

Why Beautiful People Have More Daughters: From Dating, Shopping, and Praying to Going to War and Becoming a Billionaire–Two Evolutionary Psychologists Explain Why We Do What We Do

BOOK: Why Beautiful People Have More Daughters: From Dating, Shopping, and Praying to Going to War and Becoming a Billionaire–Two Evolutionary Psychologists Explain Why We Do What We Do
10.98Mb size Format: txt, pdf, ePub
Read Book Download Book
ads 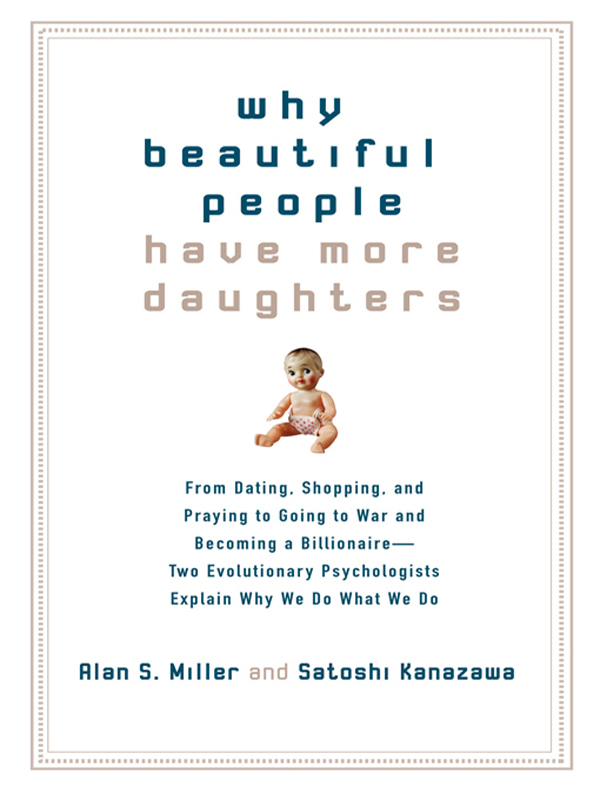 From Dating, Shopping, and Praying to Going to War and Becoming a BillionaireâTwo Evolutionary Psychologists Explain Why We Do What We Do

All rights reserved.
No part of this book may be reproduced, scanned, or distributed in any printed or electronic form without permission. Please do not participate in or encourage piracy of copyrighted materials in violation of the author’s rights. Purchase only authorized editions.
PERIGEE
is a registered trademark of Penguin Group (USA) Inc.
The “P” design is a trademark belonging to Penguin Group (USA) Inc.

Miller, Alan S.
Why beautiful people have more daughters: from dating, shopping, and praying to going to war and becoming a billionaire—two evolutionary psychologists explain why we do what we do / Alan S. Miller and Satoshi Kanazawa.—1st ed.

To our long-suffering foreign wives:

The Forgotten Half of the Equation

Two Errors in Thinking That We Must Avoid

A Note about Stereotypes

How to Use This Book

CHAPTER
1
Â
What Is Evolutionary Psychology?

A Typical View from the Social Sciences

The Savanna Principle: Why Our Brains Are Stuck in the Stone Age

CHAPTER
2
Â
Why Are Men and Women So Different?

What about Culture? Is Anything Cultural?

On to the Puzzles and Questions

CHAPTER
3
Â
BarbieâManufactured by Mattel, Designed by Evolution: The Evolutionary Psychology of Sex and Mating

Why Is Beauty
Not
in the Eye of the Beholder or Skin-Deep?

Why Is Prostitution the World's Oldest Profession, and Why Is Pornography a Billion-Dollar Industry?

Why Sean Connery and Catherine Zeta-Jones, but Not Lauren Bacall and Brad Pitt?

He Said, She Said: Why Do Men and Women Perceive the Same Situation Differently?

CHAPTER
4
Â
Go Together Like a Horse and Carriage? The Evolutionary Psychology of Marriage

Why Are There Virtually No Polyandrous Societies?

Why (and How) Are Contemporary Westerners
Polygynous
?

Why Does Having Sons Reduce the Likelihood of Divorce?

Why Are Diamonds a Girl's Best Friend?

CHAPTER
5
Â
Some Things Are More Important Than Money: The Evolutionary Psychology of the Family

Boy or Girl? What Influences the Sex of Your Child?

Why Does the Baby Have Daddy's Eyes but Not Mommy's?

Why Are There So Many Deadbeat Dads but So Few Deadbeat Moms?

Why Is Family More Important to Women Than to Men?

Why Do Girls of Divorced Parents Experience Puberty Earlier Than Girls Whose Parents Remain Married?

Why Are Almost All Violent Criminals Men?

What Do Bill Gates and Paul McCartney Have in Common with Criminals?

Why Does Marriage “Settle” Men Down?

Why Do Some Men Beat Up Their Wives and Girlfriends?

CHAPTER
7
Â
Life's Not Fair, or Politically Correct: The Evolutionary Psychology of Political and Economic Inequalities

Why Do Politicians Risk Everything by Having an Affair (but Only If They Are Male)?

Why Do Men So Often Earn More Money and Attain Higher Status Than Women?

Why Are Most Neurosurgeons Male and Most Kindergarten Teachers Female?

Why Is Sexual Harassment So Per sis tent?

CHAPTER
8
Â
The Good, the Bad, and the Ugly: The Evolutionary Psychology of Religion and Conflict

Where Does Religion Come From?

Why Are Women More Religious Than Men?

Why Are Most Suicide Bombers Muslim?

Why Is Ethnic and Nationalist Conflict So Persistent throughout the World?

I first met Alan S. Miller in the Department of Sociology at the University of Washington, where I began my graduate study in 1985. Alan joined me in the department a year later, after having received his master's degree from California State University, Dominguez Hills, in 1986. Both Alan and I were trained in a field of sociology called rational choice theory, an application of microeconomic theory to sociological problems. After receiving my master's degree from Washington, I moved to the University of Arizona to pursue my PhD. Alan received his PhD from Washington in 1991, and took up his first teaching post at the University of North Carolina at Charlotte.

Years went by, and Alan and I kept in touch by email and telephone, although the very last time I ever saw Alan in person was August 1993 in Miami Beach, during the annual conference of the American Sociological Association. In 1998, Alan was beginning to write a book on group conformity and social order in Japan from a rational choice perspective. He had been teaching a course on the topic at Hokkaido University, to which he moved in 1996, and was frustrated by the lack of good textbooks in the subject area, so he decided to write one himself. He could write all of the empirical chapters on various aspects of life in Japan by himself, being an established Japan specialist and having lived in the country for a few years. But he needed help with writing the theoretical chapters, and asked me if I wanted to write them as the second author of the book. It was a very generous offer; he gave me joint authorship of the book for writing only two chapters in it. So even though I knew very little about Japan, we decided to write the book together. It was published in 2000.
1

In September 2000, soon after our first book was published, Alan had an idea for our second book. He thought it would be great for us to write an introduction to evolutionary psychology for a general nonacademic audience. He also had the idea to make it an adult version of a children's question-and-answer book of science. I thought it was a fantastic idea, so we began collaborating on our second book immediately.

Then, in early 2001, Alan fell ill and was later diagnosed with Hodgkin's disease. He spent two years in and out of hospital, undergoing several major operations and constant chemotherapy and radiation therapy. Despite the fact that his initial prognosis was reasonably good (70 percent chance of survival), he became progressively ill. I visited Sapporo in late December 2002, but I was not able to see him; he was simply too ill, and the doctors didn't allow any visitors except for his wife. He died on January 17, 2003, at the tragically young age of 44. He is the closest friend whom I have ever lost to date, and I am not sure if I can ever get over it.

Before his death, while he was still relatively healthy, Alan was able to complete the first draft of several chapters of this book. He had also seen and commented on the first draft of several other chapters that I had written. However, as the nature of the book has changed since his death, I have had to rework all of Alan's chapters, while retaining his original ideas.

Thus, Alan never had a chance to see the final manuscript or approve the subsequent revisions that I made to his chapters. I am keeping Alan as the first author of this book because that was the arrangement we agreed upon when we began our collaboration, and because the book was originally his idea. However, the reader should know that I am solely responsible for the entire contents of the final manuscript, which Alan did not have a chance to see or approve. Alan should be credited as the genius behind this book, while any remaining shortcomings should be attributed to me.

BOOK: Why Beautiful People Have More Daughters: From Dating, Shopping, and Praying to Going to War and Becoming a Billionaire–Two Evolutionary Psychologists Explain Why We Do What We Do
10.98Mb size Format: txt, pdf, ePub
Read Book Download Book
ads

Only Love Can Break Your Heart by Tarkington, Ed
Hero Rising by H.T. Night
Break Me Open by Amy Kiss
Finding Carrie by C. E. Snyder
10 Ways to Steal Your Lover by Dee Tenorio
Between the Dark and the Daylight: Encountering and Embracing the Contradictions of Life by Joan Chittister, Osb, Joan Sister Chittister
Chasing Spirits: The Building of the "Ghost Adventures" Crew by Groff, Nick, Belanger, Jeff
Life Without Parole: A Kate Conway Mystery by Clare O'Donohue
Xeelee: Endurance by Stephen Baxter
Blood Lust and The Slayer by Vanessa Lockley