Read Why We Left Islam Online

Why We Left Islam 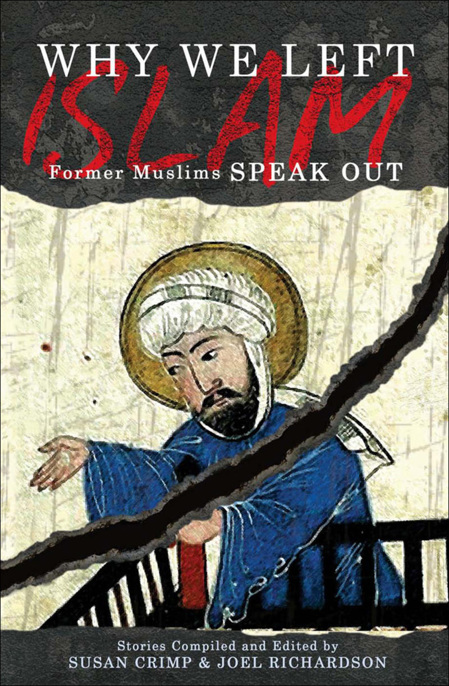 WHY WE LEFT ISLAM

WHY WE LEFT ISLAM

COMPILED AND EDITED
BY
SUSAN CRIMP

WHY WE LEFT ISLAM: Former Muslims Speak Out
A WND Book
Published by WND Books, Inc.
Los Angeles, CA Copyright © 2008 by Susan Crimp All rights reserved. No part of this book may be reproduced in any form or by any means, electronic, mechanical, photocopying, scanning, or otherwise, without permission in writing from the publisher, except by a reviewer who may quote brief passages in a review.

This book is dedicated to the thousands of innocent individuals murdered in the name of Islam—the men and women lost on September 11, 2001, in the Bali and Madrid and London bombings, and in the attacks in India and Pakistan—as well as the countless men and women killed in Iraq and in other attacks throughout the world. (Since September 11, 2001, Islamic terrorists have carried out more than ten thousand deadly terror attacks.
)

This book is also dedicated to the innocent schoolchildren barbarically slaughtered in Russia and to Sister Leonella, an elderly Catholic nun who spent a lifetime loving Muslims only to be repaid with a bullet in her back. This book is also written so that the victims of Islamic regimes who endure death by stoning, amputation of limbs for theft, and who live in fear of death because they leave Islam, may not be forgotten. The intention of this book is that, in reading the collection of stories, the world will clearly hear their cries for justice and their cries for freedom.

—Tasmila Nasrin: Physician and Author
“There is no truth on earth but monotheism and following tenets of Islam and there is no way for salvation of mankind but the rule of Islam over mankind.”
2

—Iranian President Mahmoud Ahmadinejad
“Even if we were to agree that the vast majority of Muslims are ‘moderates’ and that, say, only a mere 20 percent of Muslims are ‘literalists,’ that means that some 250 million Muslims in the world today are dedicated enemies of the infidel West.”
3

“. . . on September 11, 2001, I saw the real face of Islam. I saw the happiness on the faces of our people because so many infidels were slaughtered so easily. I was shocked at the gloating of our people for killing innocent
kafirs [
unbelievers
].
I saw many people who started thanking Allah for this massacre. Our Islamic people said that Allah gave us our wish, and that this was the beginning of the destruction of
kafir
countries. To me, this was sheer inhumanity. Then, the
imam
implored Allah to help the Taliban against the U.S. military. I was angry. It was then that I stopped praying.”
4

Chapter 2:
Why I Left Islam

Chapter 4:
The Real Face of Islam

Chapter 5:
From Belief to Enlightenment

Chapter 7:
I Am an Ex-Muslim and Proud of It!

Chapter 8:
A Journey to Enlightenment

Chapter 9:
Why I Will Not Emulate Islam’s Prophet

Chapter 11:
The Lie: A True Story of Saudi Women

Chapter 13:
You Were Right All Along

Chapter 16:
A Letter to Western Intelligence

Chapter 17:
We Need to Stick Together

Chapter 18:
I Missed a Prayer and Didn’t Turn to Stone

Chapter 19:
Born into Islam, Raised in the U.S.

B
EFORE BEGINNING, it is necessary to briefly review some basic facts and terms about Islam and its authority structure. The first and most well-known of Islam’s sacred books is of course the Qur’an. The Qur’an may somewhat be viewed as the Bible of Islam in that it is the primary holy book of Islam. The Qur’an was conveyed entirely by Mohammad, the founder and “Prophet” of Islam. The word “Qur’an” means “recitation” or “reading” in Arabic. The book consists of 114 chapters called
surahs
.

The Qur’an, however, is not the only source of sacred or even inspired traditions in Islam. For while it is the only Islamic text said to be the literal words of Allah, equally important to all Muslims is the
Sunna
. Much of the Sunna is found in several collections of traditions known as
Hadith
. Remember that word, as it will be used much throughout this book. “The Sunna” in Arabic literally means, “a clear or well trodden path.” The word refers to whatever Mohammad said, did, condoned, or condemned. It is the record of Mohammad’s sayings, customs, teachings, or the example that he left for all Muslims to follow. Muslims view Mohammad as the perfect example for all human beings. This doctrine is spelled out quite clearly in the Qur’an:

Whatever Mohammad did or said, therefore, becomes the basis from which to model all life and belief. The Sunna is as important as the Qur’an because it interprets the Qur’an. Without the Sunna, the Qur’an cannot be properly understood. In fact, many aspects and practices of the Islamic religion are not mentioned in the Qur’an but are found only in the Sunna. Therefore, the Qur’an and the Sunna together form the basis for the beliefs and practices of Muslims everywhere. In this sense, both the Qur’an and the Sunna are believed to be inspired and authoritative. When confronted with some of the more violent or base teachings
or practices of Islam, most Muslim apologists will simply ask the question, “Where is that in the Qur’an?” This is a purposeful attempt to mislead the questioner. For, as stated above, whether a teaching is found in the Qur’an or only in the Sunna, it is an essential aspect of Islam.

T
HIS BOOK would not be possible without the cooperation of some extremely brave men and women who agreed to share their stories, for which they could face death. As a result, some have chosen to remain anonymous or use pseudonyms to protect themselves. Others included here have even entered the Witness Protection Program. Despite the price that this act of witness demands, they have been brave enough to come forward and tell their stories. While some cannot be thanked by name, their cooperation and courage are beyond commendable.

Special thanks also go to other tireless heroes. Parvin Darabi has worked tirelessly to bring global attention to the problems facing women in the Islamic world. Robert Spencer of Jihad Watch and Jochen Katz of
Answering-Islam.org
have labored for years correcting fundamentalist propaganda and providing responses and solid answers for searching hearts and minds.

Gratitude is also extended to Maxine Fiel for her contribution, as well as to Mara Einstein for the expertise she offered to help bring this project to fruition. In addition, I thank all of those who have been brave enough to break out of their own personal prisons by standing up to tyranny. Finally, I extend my deepest and most heartfelt gratitude to the memory of those who have made the ultimate sacrifice.

D
UE TO THE SUBJECT MATTER of this book, I can already hear the potential cries and chants of “Death to the authors. Death to the editor. Death to the publisher.” Indeed, it is sadly true that the simple expression of one of the West’s greatest freedoms, namely the freedom of speech, could result in danger to all involved in this project. However, in this time of global Islamo-fascist terrorism and crippling political correctness, there is too much at stake to capitulate to fear.

While it is acknowledged that there are millions of Muslims who want to live quiet and peaceful lives, it is not these Muslims that this book is about. This book is about the other side of Islam—the side of Islam that refuses to live in peace with the non-Islamic world. Even for those individuals who would rather not rock the boat, there must come a point when enough is enough. When the Sudanese government jails a teacher because her pupils name a teddy bear Mohammad
1
, or when mobs brutally pillage and murder over a depiction of Islam’s Prophet in a cartoon
2
, or when a sixty-five-year-old Catholic nun dies because of a reference Pope Benedict XVI made about Mohammad
3
, surely it is time to pause and examine the state of our world and, specifically, the state and purpose of Islam itself.

In recent years the public has seen calls for world leaders to convert to Islam.
4
Pakistan’s Benazair Bhutto has been assassinated.
5
Islam has inserted itself into the global public square and so has opened itself to examination. What you will read here expresses the concerns of many former Muslims about the imposition of Islam on their lives. Their desire to speak candidly is born from their concern about what they have seen from within.

This collection of stories perhaps better than any other exemplifies the spirit of what makes the West great—the freedom to speak, to query, to challenge, and even to reject. We in the West value religious
freedom and generally respect other world religions. Because Islam is categorized, viewed, and understood merely as a religion, many hesitate to participate in any discourse critical of it.

The problem with this thinking is that Islam is not merely a religion; it is also a full-fledged global political movement that seeks to impose its ways onto every human being on the planet. As such, Islam is far more than a religion; it is also a detailed legal system and, as many Muslim scholars have expressed, a complete way of life. So, while it is perfectly acceptable in any public forum to criticize capitalism or monarchism, it is a serious violation of modern political correctness to criticize Islam. However, as an ideology, it may fairly be compared to any other ideology. But, as you will discover, Islam prohibits the type of examination or criticism that this book entails and even offers fatal punishments for any criticism. Whatever side of the political spectrum you lean toward, this prohibition should deeply concern us all.

This book you now hold arrives at an important juncture in world history, for while millions of Muslims throughout the world increasingly embrace more radical forms of Islam, millions more choose to abandon their faith altogether. Yet while we may read about the opinions, thoughts, and activities of radical Muslims throughout the world, the other side of the story is rarely heard. These former Muslims walk away for various reasons: some to join other religions, some to leave behind religion altogether. However, for the most part, these so-called “apostates” depart because they feel that Islam allows little space for individual freedom; nor does it suitably value human life. Many concluded that Islam does not promote tolerance or individual rights but instead offers suppression and intolerance.

The Wine Savant: A Guide to the New Wine Culture by Michael Steinberger
Tempting Fate by Dillin, Amalia
Tours of the Black Clock by Erickson, Steve;
Reading His Mind by Melissa Shirley
The Rebellion of Yale Marratt by Robert Rimmer
Love in High Places by Jane Beaufort
The Temptation of Savannah O'Neill by Molly O'Keefe
The Girl Who Could Not Dream by Sarah Beth Durst
The Ten Thousand by Michael Curtis Ford
Terrors by Richard A. Lupoff