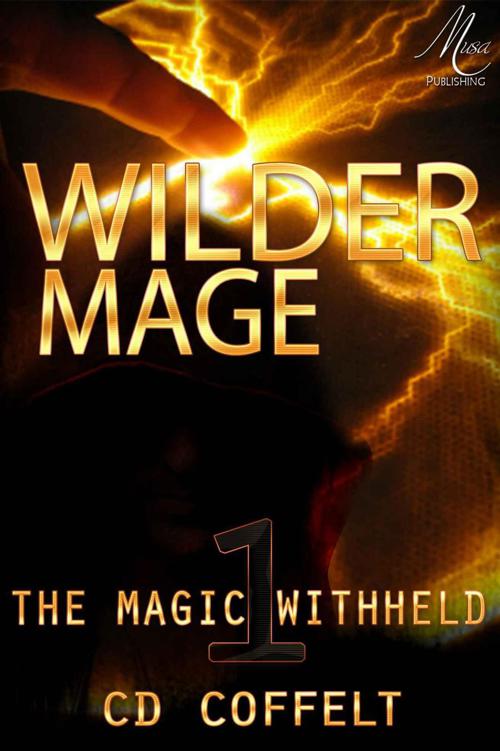 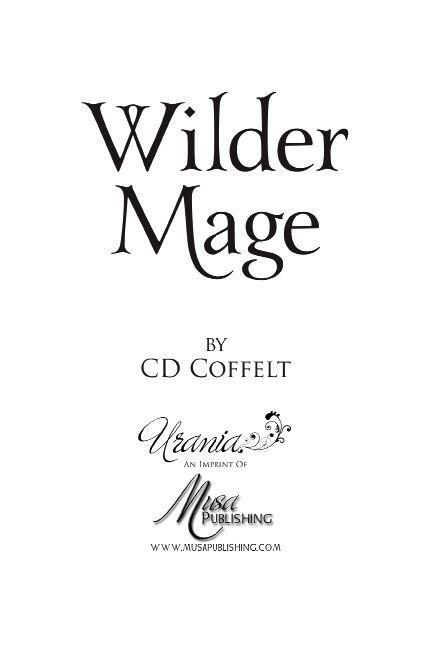 This e-book is a work of fiction. While references may be made to actual places or events, the names, characters, incidents, and locations within are from the author’s imagination and are not a resemblance to actual living or dead persons, businesses, or events. Any similarity is coincidental.

This e-book is licensed to the original purchaser only. Duplication or distribution via any means is illegal and a violation of International Copyright Law, subject to criminal prosecution and upon conviction, fines and/or imprisonment. No part of this e-book can be reproduced or sold by any person or business without the express permission of the publisher.

To Mom. Lookee what I did.

T
he earthquake wasn’t his fault. Not this time.

Justus Aubre stumbled and nearly fell as he jumped from his pickup cab. Under his feet, the ground muttered and groaned. The chaos around him tasted of magic.

The earth-deep sound screamed of energy, the kind a wizard like Justus controlled. But this mage was different. The worker of this seismic event was out of the closet and unafraid of watchers.

Magic swirled around him in streams, red and orange like the contrails of a jet.

Some wizard with Earth ability. The Imperium will be pleased
, he thought wryly.
Impressive, but…

Justus shrugged and calculated that the damage was minimal. He could have done better in his sleep…if he’d wanted the world to fall on his head.

The parking lot lights still wobbled from the quake, adding a strobe effect to the surreal. The cars, like partygoers after a drunken brawl, canted sideways over a crack that split the asphalt. Car alarms whooped.

Anger flicked through him. Magic coursed from his will and into the night. Silence. But only for a moment.

Around the lot, houses came to life with porch lights and shouts. Dogs barked. Doors slammed. People in the parking lot stumbled to their cars. Voices blended and overlapped into a single note of shock.

“Was that an earthquake?”

All the same. Typical blind-eye thinking.

No one seemed hurt. Distressed, yes. But so what?

Absently, he brushed his cheek with the back of his hand, then frowned at the streak of blood. Justus wiped his face until no fresh crimson collected on his hands.

He shrugged and walked to his pickup, keys swinging in his hand.

A scream made him jerk to a stop and swivel around.

Behind him, two figures struggled. A silver-haired man grappled with a thick-bodied figure. With a brutal twist, the thug ripped a watch from the oldster’s wrist and shoved him to the ground. Half-hearted protests came from a group of people clustered on the sidewalk of the Civic Center. Some pointed. Others thumbed their cell phones.

Anger poured into Justus again, and his frame shuddered with unused power. But he throttled it down when the hairs on his arms tingled like thousands of bees fighting to free themselves, thrumming.

Another mage was close.

He severed the magic, and like a strand of fine glass, it broke and raked him with its sharp edges. The sentient magic never went easily.

Justus gripped the small mud-colored rock that hung from a black cord around his neck. It warmed to the magic in the air and to the other mage’s presence. He hesitated. The old man seemed unhurt. After all, losing a watch wasn’t that terrible. The thug stared down at the prone man with a sneer on his face. Hot words followed. Justus was shocked when the older man shook his fist at the mugger standing over him.

Wrath threatened to overwhelm him.

His grand plan to avoid attention—shot to hell.
What an idiotic thing to do, getting involved in someone else’s problem.

A whisper of magic escaped his control and coursed to his fingertips. He firmed his grip, placing the volatile emotions into a mental vise.

Justus advanced on the mugger, whose focus was on the old man. He knocked the watch from the thief’s meaty fist and backhanded him as he whirled. The man staggered with a grunt.

Justus chanced a look at the old man. The guy had crawled out of the light and to the shadows. Relief, despite his internal rebuke, softened his irritation. A hiss of metal on leather killed his interest.

A saw-toothed blade, held in the thug’s hand, reflected light from the streetlights with the same gleam as the man’s bared teeth. Justus angled away, shifting to the side as the mugger’s stroke flashed wide. Justus shoved him, then danced out of the way. The mugger fell on the concrete in an epic—and very satisfying—face plant.

Justus tested the comet trails of magic as a child blows to see their breath on a cold morning. The glittery energies brightened as he named them.

A deep chill shivered over his skin like ice. No one stepped forward or called the elements as he had. But someone was there who knew and spoke with the energies, the other magic maker, using the anonymity of the crowd to hide. The sparkles mingled with the fog of his breath and faded.

Why hadn’t he listened to that little voice, the annoying one that had warned him away from public concerts? Even in Iowa, watchers lurked.

The mugger stood and spat a glob of blood from his broken mouth. Justus took a step back to make his retreat. He froze when the mugger focused on something over his shoulder and gave a brief nod. A heavy foot scuffed the sidewalk.

Crap. Not just one problem, but judging by the sound, two more had joined the party. At least they didn’t taste of magic.

Nevertheless, this was fixin’ to hurt.

With that thought, another surge of anger began to build. He beat it back.

Justus held his hands up, as if in surrender. “Lookit, I didn’t mean anything. I don’t want any part of this,” he said.

Diplomacy or defense? He heard the rustle of clothing behind him.

The sound of shoes on pavement warned him. A fist gripped his shirt at the shoulder. He clapped his hand on the knuckles, backed up, and elbowed the thief’s ribs as he passed. An explosive grunt accompanied the release of his shirt.

No time to appreciate the tumble of limbs and legs, curses and snarls. Number Three joined the dance.

He turned aside, swaying back when the other man threw a roundhouse, avoiding the jawbreaker, but not the scrape of the man’s knuckles across his cheek. Justus felt something burn his face, from the corner of his mouth to the cheekbone. Only a glancing blow, but it rattled his teeth, followed by hot pain.

The third man angled for another blow, and a glint of light showed a large ring on his hand. His mind cloudy from the blow, Justus realized the ring had grazed his cheek. He stumbled back against the retaining wall, unable to focus, and it gave his emotions the edge they needed to escape.

Rage tore through him, begging him to pull the fires from the air and fling them into the man. He fought the magic, trembling with the need to release the phantasms, the sound from between his clenched teeth more snarl than words. It made the thug pause, his eyes widening.

Before the Fire element came to life in his fists, Justus forced his will into controlling it and the energies faded.

He threw his arm up to block the next punch. The fist connected with his shoulder, muting the blow. A quick, hard jab to the guy’s ribs, and Justus danced back and away, shaking off the dregs of confusion. The man’s breath left his lungs in a rumbling moan as he stumbled into the two accomplices tangled on the ground.

With the thugs preoccupied, Justus threw out a tendril of seeking magic, testing for the mage in the crowd.

Nothing. No other magical signature but his. He wavered. Maybe he could get by without using his talents at all. But now three pairs of eyes focused on him, and Broken Face grinned as he gestured to the others. They began to advance once again.

Frustration threaded through him as he realized he had run out of options.

Time to stop fighting the magic and use it.

With the barest expenditure of effort—the better to avoid attention from the passing adept—Justus pulled a ribbon from the surrounding energies, the element Air, and encircled the three men, freezing them into unmoving statues.

Justus stepped out of their path and, with a flick of will, released the men. They stumbled, their momentum carrying them forward. Justus wrapped them again and gave a firm push with the shaft of Air into the wall. The familiar mass of legs, limbs, and curses formed again. It had taken no more than two seconds to push them into the pile.

And no adept confronted him.

Justus walked away, moving briskly down the sidewalk through the spectators scattered in various poses of interest and amusement. The whole show had taken less than a couple of minutes. Not enough time to acquire a crowd or alert the cops—or attract attention.

He glanced back over his shoulder and saw help for the old man had appeared in the form of a young woman in a turquoise T-shirt. She wore a massive silver-colored bracelet that chimed as she steadied the man. They moved away, the old man leaning on the girl, and neither spared a glance for their protector. He felt a pang of irritation when he realized no one had noticed his part in preventing the mugging.

Oh, well. What did he expect? A parade?

Just as he pushed the key into the driver’s side door, Justus felt his ward stone grow warm on his chest. From the barely discernible heat, he knew the magic was not close or strong. Probably the mage he felt earlier who nearly became his undoing with the hoodlums. Justus shrugged, opened his door, and slid into the seat, satisfied with the protection of his warding stone.

He touched his burning cheek and wiped off a smear of blood.

After helping the old man to his car where his anxious family gathered to hug and fuss over him, Sable Rounds stretched out her hand and gathered the element, Air. The watch flew to her fingers with a puff of energy. It was too dark for the humans to see clearly. They wouldn’t notice, she reasoned. Sable clenched her teeth when exhaustion hit her, and she handed the watch to the old man.