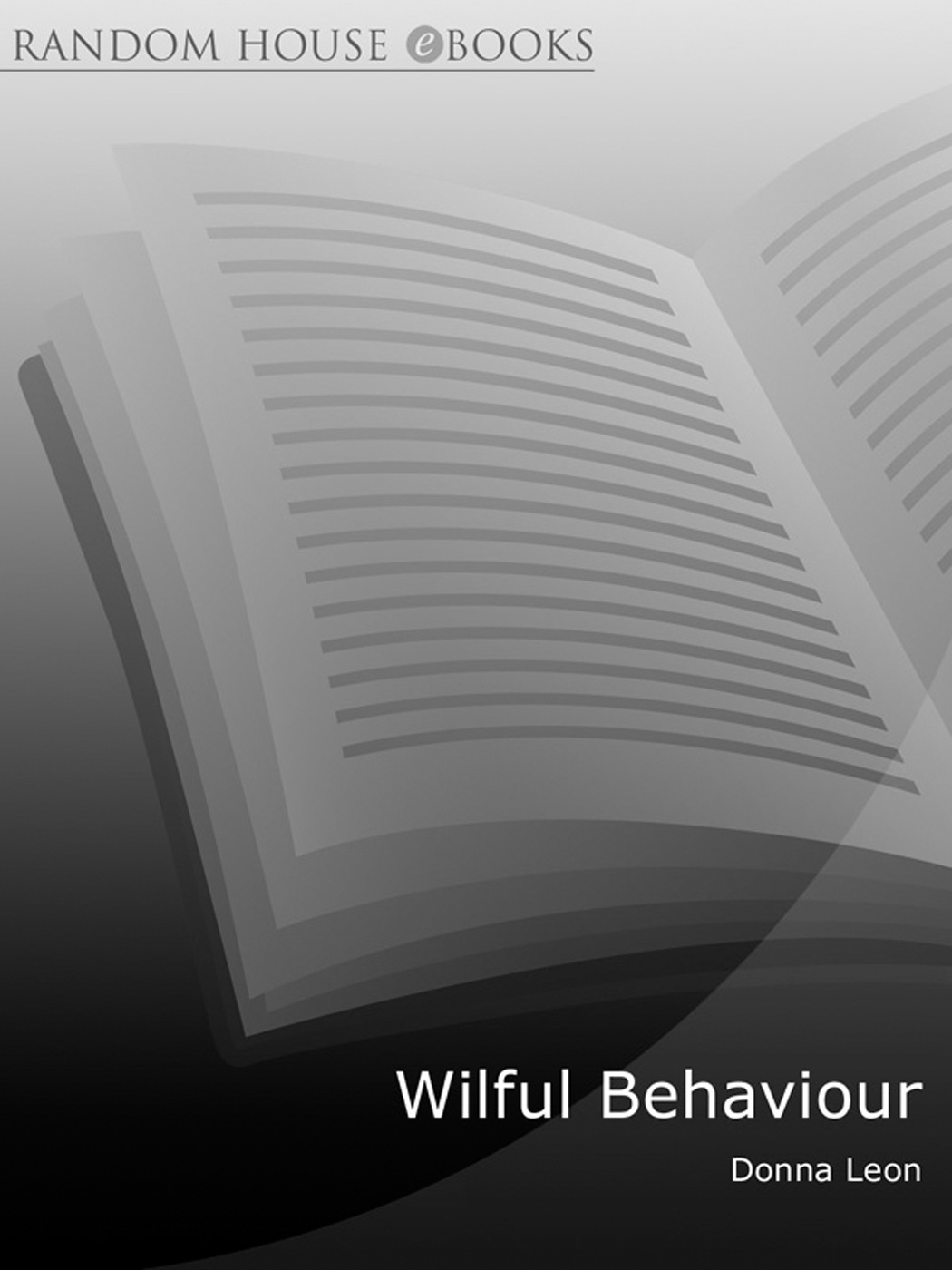 Donna Leon’s most powerful novel yet, as the murder of a young girl draws Commissario Brunetti into buried secrets dating back to the Second World War …

When one of his wife Paola’s students comes to visit him, with a strange and vague interest in investigating the possibility of a pardon for a crime committed by her grandfather many years ago, Commissario Brunetti thinks little of it, beyond being intrigued and attracted by the girl’s intelligence and moral seriousness. But when she is found murdered, clearly stabbed to death, Claudia Leonardo is suddenly no longer simply Paola’s student, but Brunetti’s case …

Donna Leon has lived in Venice for many years and previously lived in Switzerland, Saudi Arabia, Iran and China, where she worked as a teacher. Her previous novels featuring Commissario Brunetti have all been highly acclaimed; including
Friends in High Places
, which won the CWA Macallan Silver Dagger for Fiction,
Through a Glass, Darkly, Suffer the Little Children
, and most recently,
The Girl of His Dreams
.

Death in a Strange Country

The Death of Faith

A Sea of Troubles

Blood from a Stone

Through a Glass, Darkly

The Girl of His Dreams 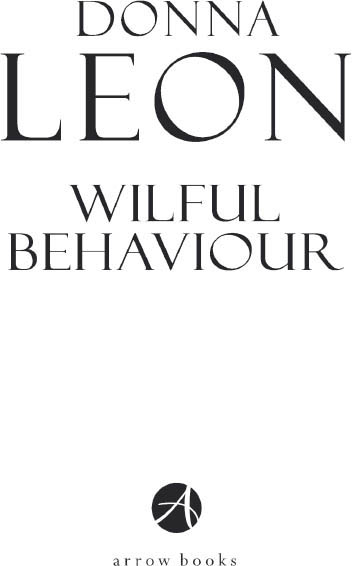 Turn me to ice.

THE EXPLOSION CAME
at breakfast. Brunetti’s position as a commissario of police, though it made the possibility of explosion more likely than it would be for the average citizen, did not make the setting any less strange. The location, however, was related to Brunetti’s personal situation as the husband of a woman of incandescent, if inconsistent, views and politics, not to his profession.

‘Why do we bother to read this disgusting piece of garbage?’ Paola exploded, slamming a folded copy of the day’s
Gazzettino
angrily on to the breakfast table, where it upset the sugar bowl.

Brunetti leaned forward, pushed the edge of the paper aside with his forefinger and righted the bowl. He picked up a second brioche and took a bite, knowing that clarification would follow.

‘Listen to this,’ Paola said, picking up the paper and reading from the headline of the leading article on the front page: ‘“Fulvia Prato Recounts her Terrible Ordeal.”’ Like all of Italy, Brunetti was familiar with Fulvia Prato, the wife of a wealthy Florentine industrialist, who had been kidnapped thirteen months before and kept in a cellar for that entire time by her kidnappers. Freed by the
Carabinieri
two weeks before, she had spoken to the press for the first time the previous day. He had no idea what Paola could find especially offensive in the headline.

‘And this,’ she said, turning the paper to the bottom of page five. ‘“EU Minister Confesses to Sexual Harassment in Her Former Workplace.”’ Brunetti was familiar with this case, as well: a female commissioner on the European Commission, he couldn’t remember what her exact position was – one of those trivial ones they give to women – had yesterday said at a press conference that she had been the victim of sexual aggression twenty years ago when she worked in a firm of civil engineers.

A man who had learned patience in his more than twenty years of married life, Brunetti awaited Paola’s explanation. ‘Can you believe they’d use that word? Signora Prato did not have to
confess
to having been the victim of kidnapping, but this poor woman
confessed
to having been the victim of some sort of sexual attack. And how typical of these troglodytes,’ she said with a vicious jab at the paper, ‘not to explain what happened, only to say that it was sexual. God, I
don
’t know why we bother to read it.’

‘It is hard to believe, isn’t it?’ Brunetti agreed, himself genuinely shocked by the use of the word and more shocked that he had not registered its dissonance until Paola pointed it out to him.

Years ago, he had begun to make gentle fun of what he then dubbed her ‘coffee sermons’, the fulminations with which she greeted her reading of the morning papers, but over the years he had come to see that there was great sense in seeming madness.

‘Have you ever had to deal with this sort of thing?’ she asked him. She held the bottom half of the paper towards him, so he knew she was not referring to the kidnapping.

‘In Naples. When I was assigned there.’

‘A woman came in to report that she had been raped. She wanted to make an official
denuncia
.’ He paused, letting memory return. ‘It was her husband.’

Paola’s pause was equally long; then she asked, ‘And?’

‘The questioning was done by the commissario I was assigned to at the time.’

‘He told her to think about what she was doing, that it would cause her husband a great deal of trouble.’

This time Paola’s silence was enough to spur him on.

‘After she listened to him, she said she needed time to think about it, and she left.’ He could still remember the set of the woman’s shoulders as she left the office where the questioning had taken place. ‘She never came back.’

Paola sighed, then asked, ‘Have things changed much since then?’

‘Are they any better?’

‘Minimally. At least we try to have female officers do the first interview.’

‘If there are any on duty when it happens, when they come in.’

‘We call around and see if a woman can come on duty.’

He wondered how breakfast had somehow become an inquisition. ‘If not, then they are interviewed by whoever’s available.’

‘That means, I suppose, that men like Alvise or Lieutenant Scarpa could do the questioning.’ She made no attempt to disguise her disgust.

‘It’s not really questioning, Paola, not like when we have a suspect.’

She pointed at the
Gazzettino
, her fingernail tapping out a quick triple beat on the second headline. ‘In a city where
this
is possible, I hate to think of what
any
sort of questioning is like.’

He was just at the point of opposition when she, perhaps sensing this, changed her tone entirely
and
asked, ‘How’s your day look? Will you be home for lunch?’

Relieved, aware that he was tempting fate but helpless to stop himself, he answered, ‘I think so. Crime seems to be on holiday in Venice.’

‘God, I wish I could say the same about my students,’ she said with tired resignation.

‘Paola, you’ve only been back at work six days,’ he couldn’t prevent himself from saying. He wondered how she had managed to monopolize the right to complain about work. After all, he had to deal, if not on a daily basis, then at least with upsetting frequency, with murder, rape and battery, while the worst thing that could happen in her classroom was that someone would ask the identity of the Dark Lady or forget what happened at the end of
Washington Square
. He was about to say something to this effect when he caught the expression in her eyes.

‘What’s the matter?’ he asked.

‘Huh?’ He knew evasion when he heard it, saw it.

‘I asked you what was the matter.’

Again, he recognized the signs that she was reluctant to discuss something. He pushed back his chair and got to his feet. He came to her side of the table, braced his hand on her shoulder, and bent to kiss the top of her head.

‘I’ll live in that single hope,’ she answered and leaned forward to sweep up the spilled sugar.

Left alone at the table, Paola was faced with the
decision
of whether to finish reading the paper or to wash the dishes: she chose the dishes. That task finished, she glanced at her watch and saw that her only class of the day began in less than an hour, and so she went back to the bedroom to finish dressing, her mind absorbed, as was often the case, with the writing of Henry James, though in this case it was only to the extent that he might have influenced Edith Wharton, whose novels were to be the subject of her lecture.

She had been lecturing, recently, on the theme of honour and honourable behaviour and the way it was central to Wharton’s three great novels, but she was preoccupied with whether the concept still had the same meaning for her students; indeed, whether it had any meaning for her students. She had wanted to talk about this with Guido that morning, for she respected his opinions on the subject, but the headline had diverted her.

After decades, she could no longer feign not to notice his usual response to her coffee sermons: that quickened desire to leave the table. She smiled to herself at the term he’d invented and at the affection with which he generally used it. She knew she responded too quickly and too strongly to many stimuli; indeed, in a moment of high anger, her husband had once drummed out a damning list of just which subjects would push her until she was past reason hunted. She refused to dwell upon his catalogue, its accuracy still enough to cause her a tremor of nervousness.

The first autumn chill had fallen on the city the day before so Paola took a light woollen jacket
from
the closet, picked up her briefcase and left the apartment. Though she walked through the city of Venice to reach her classroom, it was New York that was on her mind, the city where the drama of the lives of the women in Wharton’s novels had played out a century ago. Attempting to navigate the shoals of social custom, old and new money, the established power of men, and the sometimes greater power of their own beauty and charm, her three protagonists found themselves perpetually buffeted against the hidden rocks of honour. But passage of time, Paola reflected, had vaporized from the common mind any universal agreement on what constituted honourable behaviour.

Certainly the books did not suggest that honour triumphed: in one case it cost the heroine her life; another lost her happiness because of it; the third triumphed only because of a constitutional inability to perceive it. How, then, to argue for its importance, especially to a class of young people who would identify – if indeed students were any longer capable of identification with characters who were not in film – only with the third?

The class went as she had expected, and she found herself, at the end of it, tempted to quote to them from the Bible, a book for which she had no special fondness, the bit about those who have eyes and fail to see, ears and fail to hear, but she refrained, realizing that her students would be as insensitive to the evangelist as they had proven themselves to be to Wharton.

Cadillac Cathedral by Jack Hodgins
Murder by Numbers by Kaye Morgan
Four Roads Cross by Max Gladstone
The Ninth Man by Dorien Grey
Giving Him Something He Can Feel by Uvonda, Damenia
Letters from Heaven / Cartas del cielo by Lydia Gil
The Incumbent by Alton L. Gansky
Girl After Dark by Charlotte Eve
His Lady Peregrine by Ruth J. Hartman
Sirius by Olaf Stapledon