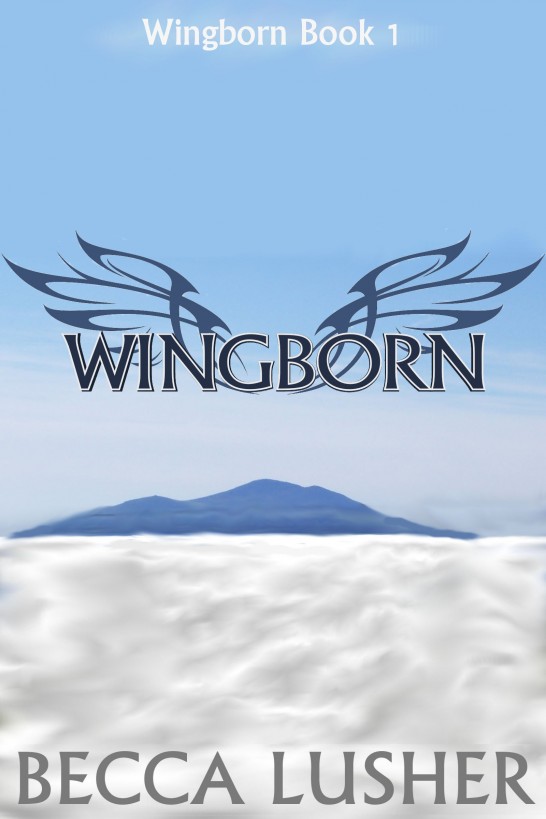 All characters and
events in this publication are fictitious and any resemblance to
real persons, living or dead, is purely coincidental.

This ebook is licensed
for your personal enjoyment only. This ebook may not be re-sold or
given away to other people. If you would like to share this book
with another person, please purchase an additional copy for each
recipient. If you’re reading this book and did not purchase it, or
it was not purchased for your use only, then please return to your
favourite ebook retailer and purchase your own copy.

Or at least leave a
review on your favourite retailer or reviewing website.

Thank you for respecting the hard work of this
author.

~ ~ ~
For anyone who dreams of
wings.
And for anyone who’s ever
had their dreams diminished by doubt or been told no, simply
because they weren’t born the “right” particular way to fit the
“perfect” mould.
Fly fast, fly high, fly
free,
and may the wind be ever at
your back.
Bright sun and clear skies,
everyone.
~ ~ ~

T
HERE WAS NO BLOOD.

A hint of smoke lingered in the air, more
imagined than real, and charcoal crunched beneath Lyrai
’
s boots as he entered the remains
of the base. Mist twisted and crept across the ground, drifting on
gentle breezes that were so at odds with the season. A blanket of
snow had fallen overnight, but the damage was too great to be
hidden.

Once it had been the pride of Etheria; a
defensive bastion that protected trade and lives right in the
shadow of the Worlds End mountains. From a humble military camp to
an impressive citadel, it had been home to over five hundred Rift
Riders, half of the Greater West
’
s force. Feather Frost was both the heart and the
frontline of the war against the kaz-naghkt.

Nothing remained, neither feather nor bone.
All was ashes. The ground was snow-locked, the buildings burnt, the
reek of death long faded away. There was no blood. How could almost
seven hundred men – the barrack staff, attendants, Riders and all
their miryhl eagle mounts – simply vanish? No one had escaped. This
attack could have been as much as a month old, leaving plenty of
time for survivors to have reached safety and sent out word. It was
only due to a returning circuit messenger that anyone had
discovered the attack at all.

“How could
this happen?” Stirla joined Lyrai on the take-off platform, which
commanded an overview of the destruction.

Unable to speak, Lyrai shook his head.
Flying sweeps with their captain out of Kaskad, they had been the
closest Riders when the news broke. Not that anything in the
hysterical messenger
’
s
report had prepared them for this. Nothing could have prepared them
for this.

“
Lieutenant Stirla, take your flurry down and see if
there’
s anything to salvage.” Captain Myran emerged from the
mists, limping up the slope. “Fleik
’
s waiting for you. Lieutenant Lyrai, divide your
Riders. Send half with Stirla, the rest remain with you. Find
shelter and get a fire going. We
’
re going to need it.”

Both men saluted, and Stirla and his Riders
were soon picking their way across the frozen remains. Numb from
both cold and shock, Lyrai watched them go, his captain by his
side. The wind picked up, scattering snow over their boots.

Freshly graduated from Aquila, the silver
stitching still bright on his stripes, Lyrai wasn
’
t sure that there were any words for this,
except: “There
’
s no
blood.”

Myran rested a hand on his youngest
lieutenant
’
s shoulder.
“Shelter, Lyrai. Fire and food. There
’
s plenty in life that we can
’
t change, so let
’
s focus on the small things we can. Look
to your men, lieutenant.” With a nod of dismissal, he called for
his miryhl and Lieutenant Imaino
’
s flurry.

Left alone, Lyrai watched his fellow Riders
search through the wreckage, while others took to the skies. A
fierce wind howled over the ridge, wiping the platform momentarily
clean.

Blood. Mostly hidden by the scorched wood
and stone beneath but there nonetheless. Hunkering down, Lyrai
chipped at the ice with his knife and at last found evidence of
struggle and slaughter.

He rested his palm over the stain. “Be at
peace in the halls of Typhaestus, brothers. Rest well. We shall
avenge you.”

Shivering beneath a fresh gust of wind, he
straightened up and called for his Riders. It was time to seek
shelter beneath an ever-darkening sky.

Overhead, it began to snow.

N
OT EVERYONE COULD
handle raw meat first thing in the
morning. Then again, Lady Mhysra Kilpapan had never considered
herself entirely normal. Not when she spent every possible moment
in the eyries. Dawn was her favourite time of day, when the rising
sun spread golden fingers through the hatches to make the feather
dust dance. Even in winter, if the sun rose cleanly, the eyries
became a slice of Heirayk
’
s own heaven. Except for the meat in her hands.

Sadly, the sounds of the eyries rarely
matched the perfection of its sights. Miryhls were far more raucous
than their smaller, wild eagle cousins. They muttered constantly,
like discontented dowagers at a ball. At all times the eyries
bubbled with their low purring hum, which was occasionally
shattered by a shriek just because they could. Breeding miryhls
were a fractious lot, but the chicks were the worst.

Which was why Mhysra was there before the
sun, bird dust in her nose and chunks of raw venison in her hands.
Five chicks jostled around in front of her, trampling each other in
their eagerness to gain her attention. Barely a month old, the ugly
chalky-white creatures were covered in clumps of ash-grey down,
long scrawny necks wobbling beneath their oversized heads. They
were already as large as a medium-sized dog and growing fast. Not
too long ago, their enormous beaks had seemed too heavy for them,
meaning they spent more time on their faces than their feet. With
their increased size came the strength enough to lift their heads,
ready to gape their plaintive demands for the bloody meat clenched
in her fingers.

Behind them, two yearlings waited. The size
of pit ponies and highly irritable, they looked like hedgehogs;
glossy brown bundles pinpricked by the emerging quills of their
first flight feathers. They tried so hard to act fully grown, but
hunger always defeated them and the squalling chicks were drowned
out by a cracked scream, silenced only when Mhysra tossed a chunk
their way.

“Dignified,” a
hoarse voice muttered behind her, rough-edged with sleep.

She glanced over her shoulder, smiling.
“As if you weren’
t the
same at their age.
”

On first glance, the young miryhl looked
barely any different to the other adult eagles slowly waking in the
glowing dawn. Their feathers shimmered through every shade of
brown, from near-black down to honey-gold. The bird at her back was
a conker-coloured giant, streaked with hints of gold. Cumulo, her
Wingborn.

Snorting, he glowered at the chicks vying
for her attention.
“
Remember it well, do you?
”

Mhysra chose to ignore him, preferring to
focus on feeding the babies instead. Of course she didn
’
t remember Cumulo as a chick;
she
’
d been a helpless
babe at the time. He had hatched at the exact moment she came into
the world, creating that most coveted and rare of bonds – the
Wingborn – tying them together for life. Rift Rider legends were
full of daring Wingborn, describing them as one soul divided. One
will, one reason, one heart.

She
’
d tried reading such stories to Cumulo once. He
told her not to be so soppy and, that if she insisted on reading to
him, could she please not make it such sentimental drivel. Whatever
the Wingborn bond meant to historians and storytellers, to her it
was family. No different than siblings or cousins. Quite
disappointing, really.

Oblivious to her thoughts, Cumulo eyed her
jealously as she fussed over the baby miryhls.
“
No Riders in their right minds would
choose to partner with creatures like these,
”
he muttered disdainfully. Which was
slightly unfair since the chicks weren
’
t exactly at their best – covered in strips of
meat, their down clogged with blood. One tripped over its own feet
and Mhysra bit back a smile.

“
You’re
such a snob, Cue,
”
she said.
“
And anyway, expecting a Rift Rider to have any
mind, let alone a right one, is asking a bit much.
”

She answered his grumbling with a wistful
sigh. It would be wonderful to join the Riders, the miryhl-riding
protectors of the Overworld and pride of the Flying Corps. Except
the entire Corps, from Rift Riders to doelyn scouts, were men, and
had been for the past hundred years. It was a waste of time to even
dream of joining. So she didn
’
t. She was happy breeding miryhls on her
aunt
’
s farm; Cumulo was
the one who wished for more.

Throwing down the last chunks, Mhysra rinsed
her bloody hands in a bucket and watched her sated chicks settle
inside their nesting pen for a nap. Another two bells
and
they
’
d be shrieking again, but it was no longer
her task to take care of. Her life was about to change, though
sadly not for the better.

Eager for a distraction, she unlatched the
gate and entered the pen.
“
Don
’
t
come in here,
”
she
warned as Cumulo shuffled along his perch.

“Why would I
want to?” he sniffed, preening his shining wings, which were a
stark contrast to the scrawny babies.

Mhysra ignored him and started grooming the
fledglings, running her fingers through their new feathers and
rubbing away the quill-tips they couldn
’
t reach. It was a task she
’
d been doing for years and she loved it.
These fledglings in particular were extra special – she
’
d helped to match the parents,
turned the eggs, watched them hatch and seen them through their
first year. They were as much her babies as the miryhls
who
’
d conceived
them.

Flow (The Beat and the Pulse #6) by Amity Cross
Crossing on the Paris by Dana Gynther
Betrayal by J. Robert Janes
Wherever You Go by Heather Davis
Scandalizing the CEO by Katherine Garbera
Madeleine's Ghost by Robert Girardi
Through Rushing Water by Catherine Richmond
Make Me Stay by M. E. Gordon
Purple Prose by Liz Byrski
Awakening: A Timeless Series Novel, Book Four by Lisa Wiedmeier