Read With or Without You Online

With or Without You

BOOK: With or Without You
>>DOWNLOAD HERE >>READ ONLINE NOW
ads 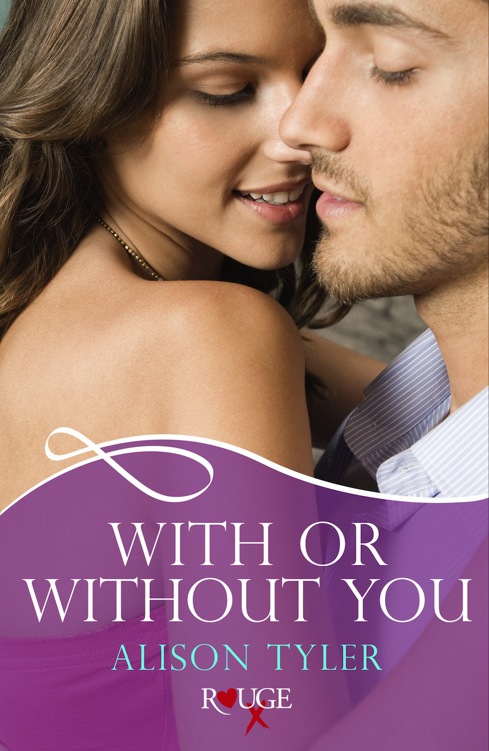 WITH OR WITHOUT YOU
Alison Tyler

This is Nora Hammond with some delicious news! Unfortunately, we have lost Vladimir Danielson, my right-hand man and chief bartender for the past six years. I can’t say I’m not sad to see him go, yet Vlad is moving on to his own night-time talk show on the Bijoux Network. I wish him only the best of luck with his burgeoning career.

Of course, this means that his spot is open, and I’m hoping to have some fun with a new show of our own. The Pink Fedora will be hosting a stimulating new reality show. Twelve applicants start – one is left at the end. And this one lucky person, male or female, will embark on the wildest career I can imagine.

During Vlad’s reign, he posed naked in two ladies’ magazines, created his own romantic cocktails recipe book, and served as the honoured judge in several international mixologist competitions.

Do you have what it takes to step into Vlad’s trademark scarlet eel-skin boots? If so, respond to our call for contestants. It’s all happening at the Pink Fedora, the last Friday in October, and we’ll be having a blast, with or without you. Check out the Call for Contestants below. Click
here
to print official invitation with details of time, date and address for the hottest event this Halloween.

Quote for the Day:
As Janis Joplin said, ‘I’m saving the bass player for Omaha.’

The Pink Fedora, the internationally hip nightclub known for non-stop naughtiness and raucous recreation, is currently searching for a new head bartender. Duties include
running a nightly crew of twelve, creating an ever-changing bar menu and pampering Hollywood’s exotic elite.

As the Pink Fedora isn’t your average nightclub, the application process isn’t your average job interview. In order for us to locate the perfect person for this position, we’ve joined the Bijoux Network to create a brand new reality show:
You Can Leave Your Hat On.

Open-minded insomniacs are encouraged to apply. Applicants should prepare:

All who enter must be at least 21 years of age. But you were all smart enough to figure that out already, weren’t you?

JLK said: What do contestants wear?

Nora Hammond said: If you have to ask, you shouldn’t come.

Nora Hammond said: Money, fame and love. Not necessarily in that order.

EleanorJRomano said: Are you serious, Nora? A
reality
show –

Nora Hammond said: Would I lie to you, Eli?

‘Sweet,’ Byron whispered in a low voice, his lips pressed against the side of my neck. ‘You’re so damn sweet.’

He moved slowly, kissing his way to my mouth, then holding me tightly in a firm embrace, so that I could feel his muscular chest and, lower, his hips against mine. I looked up at him and, although I wasn’t the slightest bit cold, a shiver worked throughout my body. We kept the apartment deliciously warm now, at the start of fall. Yes, California generally boasts mild autumn weather. But Byron had undoubtedly turned the heat on when he’d gotten home, preparing for this, our weekly tryst.

Still holding me in his arms, he kissed me again, first gently, then with a slowly increasing passion. His lips pressed against my own, and once more I trembled at his touch. Even after four years together, he knew how to make me dissolve into pleasure. My body responded beat for beat with the motions of his fingertips, as his strong hands ran up and down my back. Up and down, stroking and caressing.

All week long, I’d been thinking of this night. When Thursday morning finally arrived, I’d put extra care into my outfit, choosing my favourite pair of black panties from the dark sea of ebony lingerie in my underwear drawer. Black on black. My best friend Nora couldn’t stand my underwear drawer. ‘Why don’t you have any crimson? Any chartreuse? You adore art so much. You love colour.’

I do appreciate colour, but on canvases, not myself. Besides, black panty sets are part of my standard attire.
I’ve always been a slave to routine, if nothing else. Part of me hated the fact that Thursday had become our evening to make love, but part of me relished the regularity. So what if we were paint-by-the-numbers when it came to sex? The satisfaction was as intense as it had been the first time we’d ever been together.

With our living room lights turned off, the exotic glow to the room came solely from the sunset. Pinks, reds and golds shimmered across the sky, thick bands of colour that disappeared into the horizon.

I looked into Byron’s grey eyes and, as always, I thought of storm skies, or silver-tipped clouds moving across a pale twilight backdrop, thought of the paintings by Gerhard Richter, one grey monochrome after another. Grey taking on a deeper beauty than an entire rainbow of hues. I was down to my simple panties and bra, feeling sexy and in control, when he flipped me around, so that now I was facing out of our windows, looking down at the ocean eighteen floors below.

The ocean mesmerised me as I watched the waves fold over on each other. Foam met the sand and slid back into the sea. It was calming. Something predictable. Something I could count on.

Quickly, Byron got on his knees in front of me. I gazed down at him, wondering what was going on. My mouth was open to ask, but he shook his head and put one finger to his lips, letting me know that he had a plan, that I should trust him. When he slid my panties aside and brought his mouth to the split of my body, I gasped.
This
wasn’t part of our normal routine. Generally, after work on Thursdays, we met in the living room and had sex. Always on Thursday evenings at the same time. Always in the living room, exactly the same way. Just like that 1960s Batman television cartoon – ‘Same bat time, same bat channel.’

But tonight Byron was behaving in a far more ravenous manner. His tongue slid in slow erotic circles, exactly
where I craved, and I placed my hands securely against the plate-glass window and sighed. The pleasure was intense, so much so that my legs started to tremble. Sure, we had engaged in oral sex every once in awhile, but not often enough for me to grow accustomed to how it felt, and never with me standing and Byron on his knees like this. I gave myself over to the sensation, my palms flat on the window, Byron’s own hands around my waist, pulling me forcefully against him.

I could come like this, I thought, and the concept startled me. I usually climaxed with Byron, but only if he stroked my clit while he took me, the combination of being filled and being touched working to push me over the edge. And then there were my fantasies, visions I’d never confess to Byron, stories I told myself while we were fucking to take me over the edge.

This was different. Everything about this situation worked to thrust me off balance. Every motion of his mouth made me feel as if I might actually liquefy, melt away into nothing. But I didn’t complain. I didn’t say a word. I felt almost as if I were lost in a dream. If I made an unexpected sound, or an unplanned movement, the whole scenario might disappear, fold over itself like the foam of the waves, leaving me all alone. So I did my best to remain entirely still, concentrating every nerve of my body on the novel feeling of Byron’s tongue slipping against me.

Around and around his tongue went, those overlapping circles making my heart race. The pleasure radiated outwards, and I thought of the artwork of Kandinsky –
Circles in a Circle
– exploding circles of different colours. Overlapping. Bursting.

In every aspect of my life I possess a corresponding image of art.

When the climax rushed through me, I would have lost my balance if Byron hadn’t been supporting me with his hands. I closed my eyes tightly for a moment, wracked with pleasure, barely aware of when Byron
stood up. My eyelids flickered and I had one glimpse of his mouth, glossy with my own shiny juices, before he moved behind me and slipped his cock inside me.

He took me like that, with his body hard behind mine, his hands gripping on to my slim waist. I felt the heat of his breath on the back of my neck, and I moaned softly – one of the first sounds I’d made all evening. Byron rocked back and forth, moving to the rhythm of the music on the stereo – U2 tonight, U2 as always on the nights that I chose. His hands roamed over my small breasts, his thumbs brushing against my nipples.

The sun had started to sink into the ocean only moments before, and now the sky was turning purple. There were people down below, walking, rollerblading and biking on the concrete path that snakes along the crescent of the beach. I wondered how many of them had just made love. How many more would go home to lovers tonight, partners waiting to give them pleasure like Byron was giving me? I liked the thought. In a city as large as Los Angeles, at any given moment, there must be scores of other people doing exactly the same thing that we were doing ourselves.

Some might find that intrusive or disturbing. I found comfort in the thought.

I couldn’t have admitted it to Byron, but the concept of what other people do in the privacy of their own homes has never failed to turn me on. I suppose that makes me a bit of a voyeur. And the fact that we were making love in a floor-to-ceiling window made me a bit of an exhibitionist, as well. Even if nobody could see. Even if those tiny people down below would only receive the final crimson glare of the sunset mirrored back were they to look up at us.

I wondered what Byron was thinking about. We’d never spent much time discussing fantasies. But I suppose he had his own little visions in his mind, because as he came, thrusting hard, breathing harder, he said, ‘I love you.’

‘I love you, too,’ I murmured. Just like I did every other Thursday night.

Except for the fact that my name is Eleanor.

Words are my life. I write, translate, edit, revise. In my world, words have a heartbeat. They live and breathe. I strongly believe that once a word is said aloud, it can never be taken back. For this reason, I am generally in complete control of my words, and this is why it was so fucking awkward when Byron left me speechless.