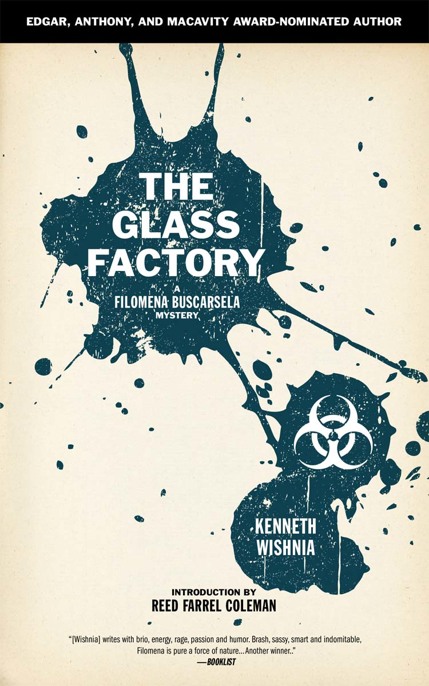 Praise for
The Glass Factory

“Wishnia writes with brio, energy, rage, passion, and humor. Brash, sassy, smart and indomitable, Filomena is purely a force of nature, and
The Glass Factory
is another winner.”
—Booklist

“Mother and daughter are so appealing, and the case against an unscrupulous businessman is put together so compellingly, the tale keeps one reading to its bittersweet end.”
—Boston Globe

“Filomena is one lady clearly worth watching.”
—Houston Chronicle

“Surprising, thrilling … Wishnia’s narrative style is nearly perfect. Filomena’s voice is tough, edgy and quite female. This is a very good book in a very good series.”
—Davis Enterprise

“This sleuth is sharp, witty, indomitable and interesting.”
—Daily Oklahoman

“Action-packed, nerve-wracking and full of sharp wit. This is a must-read book.”
—I Love a Mystery

“A hard-hitting tale of one woman’s fight against the powers that be. Tough and gritty, this is a realistic story with a determined heroine.”
—Romantic Times

“Filomena Buscarsela [is] an irreverent, intrepid, Ecuadorian-born, former New York City cop with the savvy of Erin Brockovich and the stamina of Wonder Woman.”
—Newsday

“Filomena Buscarsela [is] a Latina heroine with the epic appeal of Everywoman.… The world’s a mess, but Filomena’s still fighting. It’s that perspective that sets Wishnia apart—there’s nothing else out there remotely like his books.”
—Rocky Mountain News

The Glass Factory
© 2013 Kenneth Wishnia
This edition © 2013 PM Press
All rights reserved. No part of this book may be transmitted by any means without permission in writing from the publisher.

Printed in the USA, by the Employee Owners of Thomson-Shore in Dexter, Michigan.
www.thomsonshore.com

To the real Katherina Minola

Do not go gentle into that good night.
Rage, rage against the dying of the light.
—Dylan Thomas

It is a cruel reality that the hard-boiled world of crime fiction is littered with the ignored corpses of excellent novels written by gifted authors. This, while formulaic, paint-by-the-numbers novels featuring cardboard-cutout, superheroic protagonists and soulless, one-dimensional villains shoot to the top of the bestsellers list. I like meatloaf, mashed potatoes, and gravy as much as the next guy, but not every day of the week and not when I want to lose myself in the experience. In the crime fiction world, it almost seems as if there is a sort of inverse proportion between a novel’s originality of plot or character and its unfair and unjustified lack of recognition. Such is the case with Ken Wishnia’s
The Glass Factory.

Third in the series after the Edgar Award–nominated
23 Shades of Black
and
Soft Money, The Glass Factory
includes all of the ingredients that separate a unique piece of fiction from the run-of-the-mill variety. But we need look no further than Wishnia’s protagonist, Filomena Buscarsela, to understand what sets this book apart. Buscarsela, an Ecuadorian transplant and former member of the NYPD, is all the things a reader of the genre expects from a hard-boiled protagonist—tough, wisecracking, intelligent, insightful, resourceful, jaundiced, caring—and more. So much more. Wishnia smartly plays Fil against type. Buscarsela is an attractive woman, but Wishnia resists the urge to fall prey to using the sex kitten card, a card way too many of us in the genre rely on. In fact, the author lets us know from the first that if you’re expecting Fil to be a string-thonged, high-heeled, purring pussycat of an ex-cop, you’d better go find another book.

The novel opens with a phone conversation between Fil and one of her former male police colleagues, a Detective “Van” Snyder, and the conversation is anything but the cliché-ridden banter fans of the genre might expect. By the third line of
Chapter 1
you get the idea.

“Yo, Filgirl! What you been up to? Puke in anybody’s van lately?”

Beyond Wishnia’s refusal to have Fil depend on her anatomy as a first line of offense or defense, he saddles her with problems faced by many single mothers: a low-paying job without benefits, an unreliable ex, unhelpful relatives. So Fil is both unique—a tough ex-cop torn between her home and homeland—and an everywoman character. Readers of the genre are used to their protagonists dealing with divorce, alcoholism, etc. But Fil’s problems, I think, hit a lot closer to home. No one is going to come and make it all better. Fil is left, as we all are, to make the best of what we have even if it ain’t much. And then Wishnia takes a daring step. He does something to Fil that ramps up the tension in the novel to another level. I won’t play spoiler, but let it suffice to say that the author makes Fil’s choices deadly serious ones, from which there will be no retreat. Isn’t that what we want as readers, to be challenged? To have our representative, the protagonist, face hard choices, moral choices, life-and-death choices?

The Glass Factory
isn’t some mindless thriller full of endless, meaningless movement from world capital to world capital. The body count here isn’t vast—though it might be, depending upon Fil’s choices. The victims aren’t nameless, faceless henchmen left on the streets of London, Rome, Paris, or Jerusalem. The potential victims here are our neighbors, our neighbors’ kids. But when it comes to those tough choices, Fil does not make them on the global scale. It’s about being a mom. It’s about the best gift a parent can give a child. Nearly halfway through the novel, Fil has a very telling conversation with a friend:

“I think one of the most important things you can do in life is raise a kid to be a skeptical, independent thinker, who’s ready to fight and make the world a better place.”
“Then do
that
instead—”
“Don’t you see? That
is
what I’m doing. But it has to be
by example.
Not just words.”

As appealing and unique as Filomena Buscarsela is,
The Glass Factory
is more than Fil. Although the novel is set in the early nineties, it deals with an issue that couldn’t be more current. The novel isn’t about fracking for natural gas, but it might as well be. Here, I suspect that Ken and I have somewhat differing opinions, but that’s what good books do. They engage you whether you came for a challenge or not. And engaging the reader in a meaningful issue is what hard-boiled fiction does perhaps better than even nonfiction. Because while the reader is being entertained by the mystery and the steps taken to solve the case, he or she can also be presented with any number of sides to an issue. Wishnia hits the environmental issues hard here, but not too hard. Some might say not hard enough. You’ll decide.

In any case, I can’t recommend
The Glass Factory
enough for the reasons I’ve stated and many more. The next time you’re five pages into a book and wondering why you picked the thing up in the first place, consider taking a fresh look at Ken Wishnia’s
The Glass Factory.
Whether you love Fil or hate her, whether you agree with the political stances taken in the novel or not, you won’t regret the decision.
The Glass Factory
is a novel written with a unique passion that both adheres to and plays with the best traditions of the genre.

Black shoes polished to gleaming bite into the plush evergreen rug in the shadow of the grandfather clock, leaving the tufted arabesques of a flock of seagulls taking flight.

“Of course, it’d be cheaper just to rub you out.”

They dump him on the pool table and go. They do not see. He’s still alive. Still breathing. He scratches a word in the soft, green felt.

Then the tips of his nose hairs curl hotly with the unmistakable sharp scent—the slicing, acrid fingers of burning gasoline.

THE CALL CAME LATE.
I hadn’t heard from Detective “Van” Snyder in months.

“Yo, Filgirl! What you been up to? Puke in anybody’s van lately?”

“I made it to the sidewalk.”

“Sorry. That was a long, long time ago.”

“Job hunting and trying to be a better parent than mine were.”

“Another job search? Jeezus, you’re all over the place, Fil—”

“Late? It’s not even eleven-thirty. I even know where my children are!”

“Well, mine’s in bed, which is where I should be because she’s going to get up in about six hours.”

“Jeezus, Fil, why do you put up with that shit?”

“Yeah: her and Mount Everest both. Kids sure tie you down—”

“Every time I have to spray for roaches. Even a whiff of secondhand cigarette smoke still makes me feel like I’m gagging on a spiny sea urchin.”

“Sounds bad, Fil. Anyway, I suppose you heard Morse has contracts in the works to add Kim Tungsten to that financial empire he’s building out on the Island.”

“I don’t need this kind of torment, Van.”

“He’s still the lieutenant. But hey, every year he stays a lieutenant is another year we don’t gotta deal with him as a fuckin’ captain! You don’t know him like I do, Fil. You see, underneath that rough exterior, lies a heart of
pure shit.”

That makes me laugh. Good. If a detective sergeant can still make me laugh there’s hope for me yet.

“Why don’t you come around some time?” he asks me.

I tell him sure.

I don’t think much more about it until one morning three weeks later when I start coughing up blood.

Ring for the Nurse by Marjorie Moore
The Survivor by Thomas Keneally
The Boy Who Ate Fear Street by R.L. Stine
The Last Wicked Scoundrel by Lorraine Heath
Jill by Philip Larkin
The Chisellers by Brendan O'Carroll
Evil Ways by Justin Gustainis
Jacked by Tina Reber
Lolita by Vladimir Nabokov
Undisclosed by Jon Mills