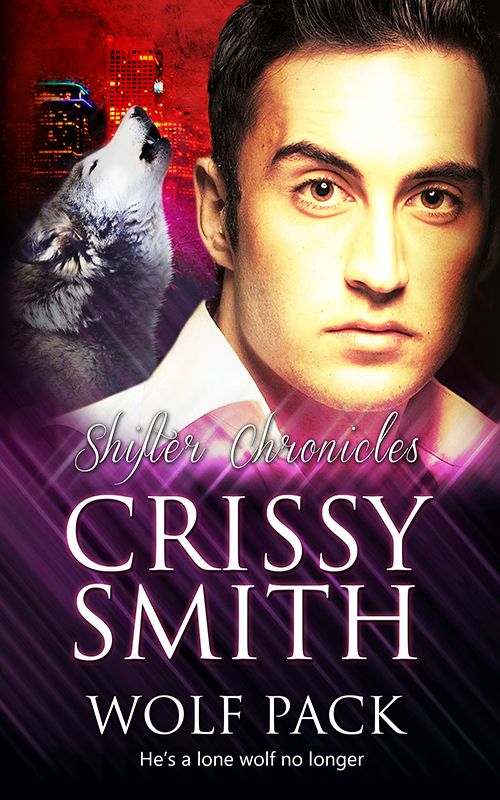 This book contains sexually explicit content which is only suitable for mature readers. This story has a
heat rating
of
Totally Sizzling
and a
Sexometer
of
3.

He’s a lone wolf no longer.

Wolf Shifter Cole Babcock is now the leader of a unit within the Shifter Coalition. As a lone wolf he’s working hard to handle his new duties and working with a team. He doesn’t mind working hard and it’s not like he has anyone to go home to.

Kendra Brown, a US Marshal, is tracking a missing witness and needs the help of the Coalition. Her first meeting with the team leader reveals that they’ve met before. In one explosive night of passion.

Things are changing fast for the two shifters. The case that brought them together runs into complication after complication. There are rogues being held hostage, Kendra’s witness is in danger, and Cole’s been offered a chance of a lifetime. The Alpha of the local wolf pack wants Cole to take over the position from him.

Cole begins to rely on Kendra for everything from closing the case to speaking with the Alpha. As they grow closer, Cole realizes how strong his feelings for Kendra are. He isn’t alone anymore.

With their lives in danger, only the love they share will get them through the week.

This book is dedicated to my sweet baby Belle. You were gone too soon but you’ll always be in our heart.

Loud, echoing footsteps bounced off the small stairway as Kendra Brown’s adrenaline pulsed through her body. Sweat dripped down her neck as the tactical vest overheated her. She gripped her weapon tighter and smiled. It was time. Kendra followed behind the Lake Worth SWAT team as they led the way up the back stairway to the fifth floor of the old, run-down motel. Uniformed police were watching the front as well as surrounding the outside completely.

Her office had gotten a tip that the missing witness she’d been searching for was holed up in room five-eleven.

That was her mission today. She needed to bring in Trent Compton and protect him, even if it was against himself. Trent’s life had changed forever when he’d seen his boss kill two men. He’d done the right thing and called the police after he’d gotten away. An investigation had followed and the Marshals had set Trent up in a safe house with protection.

The plan had worked until two days ago, when the two Marshals assigned to Trent had been killed and Trent had disappeared. One of the agents had managed to send an emergency text to their superiors asking for help, but by the time local officers had arrived at the safe house it had been too late for them.

She gripped her weapon harder as she paused behind the officer who had stopped on the stair above her. The SWAT leader was at the door to the hall, holding up five fingers. Silently he counted down, one finger falling at a time, until he held up only a fist. At that, another officer threw open the door and they filed in, fast and efficient.

Kendra followed at their heels but made sure to remain out of the way. She braced her shoulders against the far wall. One officer held up a battering ram and with his feet braced apart he swung it back then hit the door to the motel room. It broke open, splintering, and wood flew in all different directions. She flinched away as the SWAT team rushed forward into the room. They moved quietly, and Kendra felt disappointment course through her when she didn’t hear any orders to get down.

Since the Marshal’s office didn’t run the same way that most law-enforcement agencies did, Kendra had learned early in her career to work with others. When something like breaching an entrance was needed, she had to join a joint task force. She didn’t mind—unlike some federal and local badges. Most other agencies treated the Marshals like they were less but for the most part Kendra had teamed with really good agents and officers who wanted to catch the bad guys. And that was what Kendra did best—witness protection and finding people on the run.

She pushed herself off the wall before she slowly made her way to the entry. She held up her weapon and peeked around the splintered frame. The team were glancing around and searching the bathroom and closet, but Kendra already knew that the place was empty.

The manager of the motel had confirmed that he’d rented a room to Trent but he hadn’t been able to say when the last time was that he’d spotted him. Kendra had wanted to wait until she’d confirmed that he was still inside but she’d been overruled by the local captain. Captain Villa, the SWAT boss, had been in charge of this particular operation and was one of the cops who had a problem working with the Marshals. Because of the man’s prejudice against her agency, Kendra had lost her best lead on Trent.

“Fuck,” she spat but walked through the old dirty space. There were empty pizza boxes, beer bottles and other trash. She didn’t spot any clothes, though. She strolled over to the drawers and yanked them open. Empty. She left them hanging open before stomping to the bathroom. It was filthy, but she didn’t feel any moisture in the air, so it must have been a while since it’d been used.

When she walked back into the bedroom she wasn’t surprised that most of the team had moved to the hallway and only the SWAT leader remained.

She could hear the sincerity in his voice. While his captain had been a complete ass, Matthews seemed like a solid officer and had been willing to listen to her when she’d wanted to wait to verify that Trent was still inside.

Now they’d lost the only connection to Trent.

Kendra shrugged before she rolled her neck around, trying to let go of her aggravation. It wouldn’t be easy to track down Trent again but she was good at her job. “Can you give me a minute?”

“Sure.” He nodded before he left the room.

She didn’t really mind if anyone was in the room with her as she let a little of her animal side out, so the sergeant could have stayed, but she didn’t want any other scents distracting her. She’d mastered bringing the wolf to the edge without fully shifting. It did freak some people out but Kendra didn’t give a shit. Humans could either accept her or get out of her way. Her kind had been hidden for way too long.

When all of the shifter species had united and decided to announce their presence, Kendra had been thrilled. She’d hated hiding who and what she was. Her parents had lived in fear for almost all their lives. They hadn’t known what to do with such a headstrong, independent daughter.

Luck had been on her side when her parents had reached out to the Alpha and he’d taken her under his wing. She owed him so much, and he was one of the reasons that it was so important that Trent was found and all the attacks stopped. She had to get answers.

Kendra stepped closer to the unmade bed. She breathed in deeply as she dropped to her knees. Through the sweat, old food and stale beer, she could pick up on the scent that was unique to Trent. His clothing had been provided in an evidence bag with his file so she could determine that Trent had been in the room. He had been, but the scent was at least twenty-four hours old. The foul aroma of fear was heavy in the room. Something had made Trent flee from this room, and Kendra didn’t believe it was her search for him. No, Trent had some bad people after him and if Kendra didn’t find him first there was a good chance she wouldn’t get to see him alive.

Once she was she was sure she had all she could get from the scene, she stiffened her shoulders and turned to stroll out of the door.

Matthews was leaning against the wall with his ankles crossed while texting on his phone. He glanced up when she joined him.

“I have a buddy that works for the Shifter Coalition. I asked him if I could give you his contact information and he said sure. I know this sting was fucked up and I feel real bad about that,” Matthews told her.

She nodded. “I appreciate that. Too bad your captain doesn’t feel the same.”

Matthews sighed before he slipped his phone into his pocket. “He doesn’t like feds, and the fact that you’re a shifter?” Matthews scoffed. “There was no way that he’d listen to you.”

Kendra wasn’t surprised anymore about how people acted but it still pissed her off. “I’ll deal with him now.”

The smile that spread across Matthews’ face was evil. “Can I watch?”

She laughed. As much as Kendra wished she could shift and teach the captain a real lesson, her Alpha wouldn’t approve. But she could give the captain a piece of her mind. She only played nice for so long. Captain Villa was about to find out why she was the best Marshal in the area.

Cole Babcock swung his bat and connected with the ball, sending it flying into the net. A few seconds later another ball was launched right into the sweet spot and Cole hit that one too.

The night was cool but even so Cole had his shirt off and stood in only his jeans and boots inside the batting cage. He wasn’t wearing the mandatory helmet either. He figured if he took a ball to the head it could only improve his thinking. Because what in the hell had he been doing when he’d accepted the position of heading the Wolf Shifter Division of the Coalition?