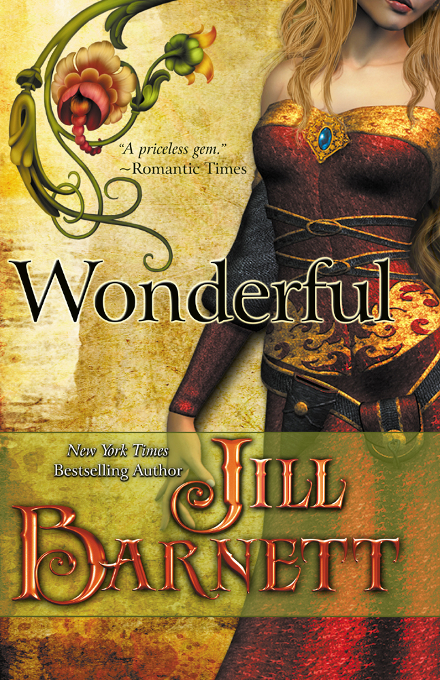 “What happened?” he asked her.

He was not surprised. He heard the worried whispers of his men. The squires and many of his men-at-arms formed a ring around them.

Lady Clio was still searching his face for something while she chewed on her lower lip.

His gaze locked with hers. “Was I good?”

She frowned, clearly startled. “Good at what?”

“Whatever it was that made you fling a pot at me.”

He heard his men laugh. Yet she did not. She looked angry. She had hit him with a pot, and there was no contrition in her expression, nor in her manner.

He stared long and hard at her lips, for they were the only color on her face. They were stained red and looked sweet and inviting and as if she had reddened them to torture him.

The Novels of Jill Barnett

The Novels of Jill Barnett
Now Available Or Coming Soon In Ebook
From Bell Bridge Books:

JUST A KISS AWAY

THE DAYS OF SUMMER

Jill Barnett sold her first book to Simon and Schuster in 1988 and has gone on to write 19 novels and short stories. There are over 7 million of her books in print, and her work has been published worldwide in 21 languages, audio and large print editions, and has earned her a place on such national bestseller lists as the New York Times, USA Today, Washington Post, Publishers Weekly, Barnes and Noble and Waldenbooks —who presented Jill with the National Waldenbook Award. She lives with her family in the Pacific Northwest.

We at BelleBooks enjoy hearing from readers. You can contact us at the address above or at [email protected]

Song of the Harper

And I am drunk

—
from the chapel of
King Inyotef, ancient Egypt

A long, long time ago, before there was heraldry or chivalry, before there were knights and castles, crusades and jousts, there was an ancient brew, a special ale with strange and potent powers.

It was called
heather ale
.

The creators of the golden ale were wild pagan warriors who lived in the hills of Scotland and painted their naked bodies blue. These Pict warriors drank heather ale before they went to war and became so ferocious in battle that even Julius Caesar claimed he could not subdue them.

The recipe for the ale was a treasured secret, the powerful ingredients rumored to be everything from forest herbs to moonflowers, from magic crystals to a certain bloodred heather.

Some claimed the magic was not in the recipe, but in the brewers—the dwarves who lived in those wild hills. They said the power of the ale was linked to the mind of the brewer, to his thoughts or his dreams or his wishes.

No one knew how or why the ale had powers.

The secret recipe died along with the ancient Picts. But for years and years afterward, many sought to duplicate the brew. Some dug deep into the hills looking for secret coffers that had once belonged to the tattooed dwarves. Others brewed strange green weeds in big black pots and chanted words no one could understand.

Alewives dropped sparkling crystal rocks into their brewing pots. They poured potions and elixirs into their vats of beer and pretended it was the legendary brew. Many were executed for poisoning an innocent ale-drinker.

For over eight hundred years no one had ever discovered the recipe. Skeptics said it was all only a wild tale. To them the ale never existed.

But many believed. Some even claimed to have tasted the magic ale on dark nights during a new moon when the little people were said to appear—brownies and fairies, even ghoulies and ghosts. The same kind of magical nights when cider turned into fine wine, when straw could be spun into gold, and when hearts were stolen. Those magical nights when love could be, oh, so wonderful.

Lady Clio’s father claimed her pale silvery hair was her greatest asset … or perhaps his greatest asset, considering he had the duty to see her wed to some poor unsuspecting fool.

To look at Lady Clio of Camrose, one would think she was the image of what every man, knight or king, peasant or merchant, wanted in a wife—someone who was meek in spirit: to make a man feel braver and stronger. A wife who was docile enough to allow a man to be the king of his castle. A woman whose head was as light inside as outside, to assure him that he would be more intelligent and therefore superior.

According to the Church, the color of a woman’s hair bespoke her true nature. The men empowered by the Church based this theory on the conclusion that hair grew directly from the brain.

Fiery hair in a woman warned men of a woman’s devilish spirit. Since woodland covered two thirds of the English isle, hair the color of tree trunks was considered common and showed the woman had little imagination.

Hair the color of midnight, which everyone knew was the witching hour, crowned the heads of women all too clever and devious. ’Twas even said by those same men of the Church that Eve herself had hair as black as a woman’s sin.

But a woman with light hair was perfect.

Unfortunately, those men of the Church did not know Clio. Like a field of golden buttercups that hides a prickly hedgehog, Lady Clio’s hair hid her true nature.

She was headstrong and determined, traits admired in men but scoffed at in women. Her father swore she had been born with that stubbornness.

Before Clio’s birth, Clio’s mother had lost five babes. With Clio, as before, her mother’s birthing pains had come before her time. So Clio came into the world two months early. When the priest tried to perform Last Rites over her puny blue body, she kicked his hand and, according to her father, opened her mouth and almost wailed the castle walls down.

To the utter amazement of everyone, Clio lived.

From the first moment of her life she had fought against the impossible. Lady Clio was born fighting to control her own destiny.

Of course, in her mind she wasn’t stubborn. Persistent was what she was. Had she given up at birth where would she be?

So Clio believed in being determined. She would not let anyone control her life, for only she held power over her survival.

She believed that with persistence came success. If one of her wonderful plans failed, she could always come up with another.

She was small in stature, but had the heart of a giant. Her mind was sometimes too quick for her own good. Once she got one of her infamous ideas into her head, she seldom thought about the consequences, of which there were usually many.

Yet no one could say she did not learn from her errors. She was not that much of a goose. She seldom made the same mistake twice.

She always made new mistakes.

Which suited her, because she was the one who determined her own future. Even if the path was strewn with the remnants of her failures. At least they were
her
failures.

Clio never allowed something as minor as a lack of skill to daunt her efforts. She firmly believed perfection came with practice. Of course she had no sound reason on which to base this belief. Indeed, history, logic, and her reputation demanded just the opposite.

But she loved a challenge. Embraced it, reveled in it. Those who knew her called her tenacious spirit a mulish exercise in futility. But Clio just didn’t believe in giving up. She would just conjure up a new plan—an idea.

Clio thought ideas were wonderful things. Those who had been privy to some of her fiascoes recognized the warning signs. The quiet and sudden stillness of her manner. The small frown line that wrinkled between her brows. The thoughtful chewing of her lower lip or the twisting of her mother’s jeweled ring on her finger. Her expression became dovelike. Peaceful.

But whenever Lady Clio got that look and, worse yet, when she claimed aloud that she had one of her “wonderful ideas,” those around her immediately lost their sense of peace.

When she had just passed her tenth saint’s day, her father paid a large penance to the Gregorian monks for what he referred to as “chanting for help.” Months later he’d claimed it was worth eating all those nightly platters of cheap, stringy mutton, since it only took until St. Thomas the Martyr’s Day to haul the new catapult out of the moat.

When the tinker’s cart had suffered the same fate two years before, it had taken twice as long to recover and had cost him much more.

At age twelve Clio took up a needle and thread to tend a hunting wound of a visiting bishop. After which her father used all the gold in his heavy purse to buy pardons for her from a passing pilgrim.

It seemed that unbeknownst to her father, the lecherous bishop had chased Clio for the entire previous week and had foolishly cornered her on the staircase, where he stole a kiss and squeezed her small breasts. So when it came time to doctor him, she had smiled sweetly and stitched up his wound in the shape of three sixes, the sign of the devil.

At fifteen, Clio was banished from the queen’s court after only two disastrous days, and her father sent the pope a jewel-encrusted golden chalice in the hope of receiving papal prayer on behalf of his daughter and only child.

It had worked, for a week later the betrothal offer arrived from Merrick de Beaucourt, a knight who was then in the Holy Lands making the English king and the Church wealthier under the guise of fighting the infidels.

Lost and Found: Finding Hope in the Detours of Life by Sarah Jakes, T. D. Jakes
Never Say Die by Will Hobbs
Lily Love by Maggi Myers
Willie by Willie Nelson
Pandora's Ring by Kaitlin R. Branch
Serpentine by Napier, Barry
Primary Inversion by Asaro, Catherine
On the Right Side of a Dream by Sheila Williams
Next to Me by AnnaLisa Grant
The Treasure Box by Penelope Stokes