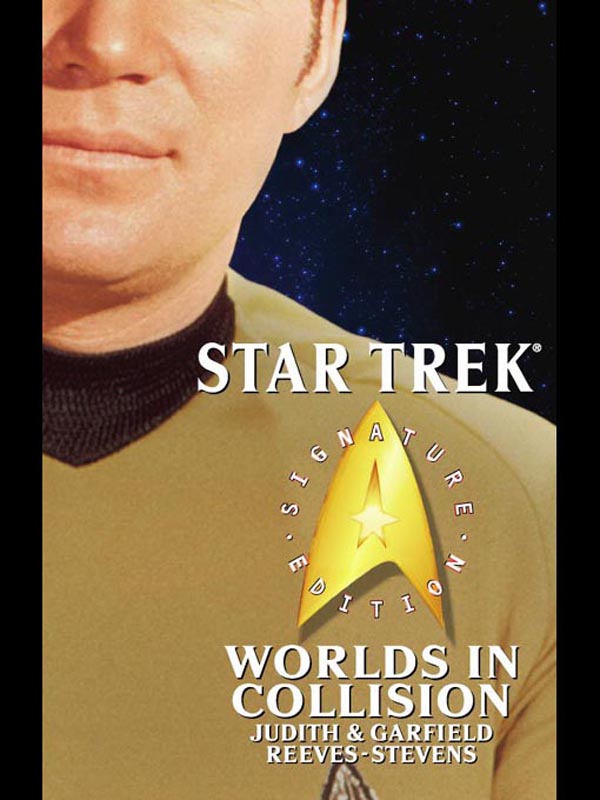 This book is a work of fiction. Names, characters, places, and incidents are products of the author's imagination or are used fictitiously. Any resemblance to actual events or locales or persons, living or dead, is entirely coincidental.

These titles were previously published individually by Pocket Books.

This book is published by Pocket Books, a division of Simon & Schuster, Inc., under exclusive license from Paramount Pictures.

who has chosen the final frontier.

For our second home in New York City
and for being there when inspiration struck.

If there's one question people shouldn't ask anymore, it's this: Why is
Star Trek
so popular? We think that's a bit like asking why some of us like chocolate (JRS), or roller coasters (GRS).

To us, the answer to all three questions seems simple, obvious, and the same. Chocolate, roller coasters, and
Star Trek
are popular because all three of them are
great:
great taste, great fun, and great storytelling.

Star Trek
storytelling is why we turn on the television to watch an episode. It's why we sit in a theater to see the newest movie. It's why you opened this book. What has come to be called the
Star Trek
Universe has a never-ending supply of stories, in all forms and styles.

If you want humor, there's McCoy baiting Spock, or Data in Ten-Forward having the human condition explained to him by a Klingon. Not to mention tribbles.

If you want action, there's the
Enterprise
plowing into the
Scimitar,
or Archer racing across a snowy roof with twin phase pistols blazing. And Khaaaan.

Romance? Riker and Troi. Hopeless romance? Julian and Jadzia. Nonstop romance? Kirk and just about any female, species not important.

From the very beginning,
Star Trek
stories have expanded out to wars among galaxies and focused in on families and friends reaching out to one another. There are stories as vast as the fate of parallel universes, and as personal as the fate of a single constable accused of a crime he did not commit.

Some of these stories, told for more than three decades on television and in feature films, have become known as “canon”âthe core, or “real,” account of our heroes and events as captured on film.

While film (and coming soon, high-definition video) is a wonderful way to tell a storyâshowing us things we've never seen before, taking us places we've never imagined, letting us sense Picard's mood from the set of his eyes, the steel in his voiceâit still has specific limitations of time, depth, and budget.

A televised episode of
Star Trek
must begin and end within an hour, or sometimes within two one-hour modules. A
Star Trek
movie can also stretch to about the same length as a two-part episode. But both the episode and the movie can only tell us stories that can be understood through what we can see and hear for ourselves in a brief window of time. The depth of detail for the story's events and characters is only what can be developed in that same constricted time.

And, of course, movie and television budgets are finite.

That brings us to books, where a story can expand to include all those additional details that make writing
Star Trek
novels so much fun. Plus, the
Star Trek
novelist's budget is infinite.

And
that
brings us to two of our
Star Trek
novels that are presented in this volume:
Memory Prime
and
Prime Directive.
They're both “classic”
Star Trek
stories; that is, they're both set during Captain Kirk's original five-year mission. Best of all, neither one of these stories could have been an episode or a movie, because they deliberately go beyond our visual and aural senses.

We believe that the heart of
Star Trek'
s storytelling strength has always been its capacity to take us to strange new worlds. Granted, over more than three decades of
Star Trek,
all of us have seen many such worlds on film, but in these two books we wanted to explore a different order of strangeness, one which could not be experienced by human senses.

Hence, the world in
Memory Prime
that we called Transition. It's a nonphysical realm, completely subjective, and thus unfilmable. However, the
sensation
of being in Transition
can
be described, and so it is in these pages. Then, in
Prime Directive,
we simply blew the budget. There are more worlds in that one story than any studio could ever afford to depict on filmâfrom a hollowed-out asteroid under construction and the tourist attractions of our own moon's Tranquillity Base, to a devastated alien planet and its moon, and even something that might
resemble
a world butâ¦well, you'll have to
visualize
it for yourself. Because it, too, we think, is something that you might never
see.

Which brings us back to that 700-plus hours of
Star Trek
canon and the collision part of this introduction.

Several key elements in these two books of ours are just plain wrong.

They weren't at the time we wrote them.
Memory Prime
was published just as
Star Trek: The Next Generation
began its second season. Zefrem Cochraneâof Alpha Centauri, no lessâhad appeared in one and only one episode of the original
Star Trek
series. So we felt safe delving deeper into his story, identifying him as a native Centauran, whose Centauran nameâ
Zeyafram Co'akran
âhad been “humanized.” Oops. Who knew that
Star Trek: First Contact
waited in the future to establish a different story for Cochrane, as a native of Montana? Same for our complex descriptions of dilithium, warp drive, and Klingon history, inspired in equal parts by the original television series and the 1980
Star Trek
reference book,
Star Trek Spaceflight Chronology.
Fun, yes. But no longer compatible with further
Star Trek
revelations on film.

Prime Directive
collides with canon, too. We correctly guessed, as it turns out, that Starfleet would have a special department concerned with making first contact with new species based on a species' reaching a particular technological threshold. Our guess was that that threshold would be subspace radio. Wrong again. As later established in
The Next Generation
episode “First Contact” and used to full dramatic effect in the movie
Star Trek: First Contact,
the real threshold is warp drive.

As someone once said, the devil is in the details (which is a different thing from “The Devil in the Dark”), and that will always be the case for
Star Trek
factâstories on filmâversus
Star Trek
fiction, which includes everything else. The very quality that makes
Star Trek
novels so appealingâthat chance to go around corners and reveal what the camera never seesâis the very quality that will lead, sooner or later, to many novels slipping out of established continuity.

Memory Prime
and
Prime Directive
are both in that category. Like “Yesterday's
Enterprise,”
they explore alternate paths through time and space that at the least show us where the
Star Trek
universe once was, and at most demonstrate how rich the universe of stories to come still is.

But rest assured that aside from some side trips into details that no longer fit canon, both novels in this book still have what counts in classic
Star Trek
storytelling: Kirk and Spock and McCoy and company, the
Starship Enterprise,
logical Vulcans, scheming Andorians, and a snarling Klingon or two. At heart, they remain
Star Trek
storytelling.

For we believe the
Star Trek
universe is a lot like the real one. It's so big that given enough time, a few worlds are bound to collide, without really causing damage, only fireworks.

And when they're handled with respect, fireworks can be great, too.

Brother of the More Famous Jack by Barbara Trapido
The Unquiet Heart by Gordon Ferris
Seeker of Shadows by Nancy Gideon
Anne of Ingleside by Lucy Maud Montgomery
Sleight Of Hand by Kate Kelly
Ruffle My Feathers (The Seven - Book 2) by Ciana Stone
Clammed Up by Barbara Ross
The Elegant Gathering of White Snows by Kris Radish
The Werewolf’s Bride: The Pack Rules #1 by Michele Bardsley
Judith Krantz by Dazzle