Read Worth Dying For Online 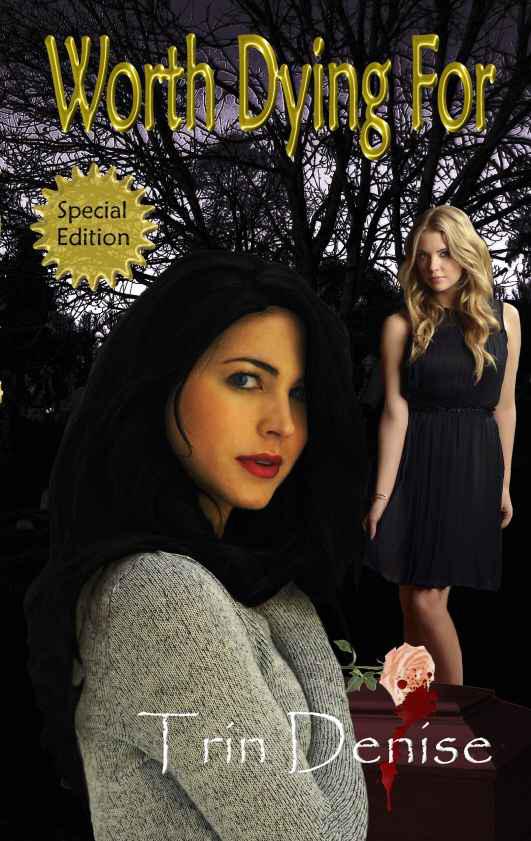 Have you ever asked yourself, “Is this worth dying for?” FBI Special Agent Rheyna Sorento must answer that question when she gets the assignment of her life and how she answers, may very well put her in the ground. When three key government informants connected to the Massino crime family turn up dead, all signs point to an internal leak and FBI Deputy Director Kyle Edwards decides to take action. He creates a new covert operation dubbed, Pandora’s Box. His plan is simple: Find the mole and bring down the mob.

With the death of her lover three years earlier, still fresh in her mind, Rheyna jumps at the opportunity to join Pandora’s Box and the chance to escape the painful memories of what used to be.

Using friendship and deceit, Rheyna soon finds herself deeply immersed in the family of Anthony ‘Big Tony’ Castrucci, the man slated to become the next Under Boss. Over the course of several months, a rising body count and countless hours of mind numbing surveillance, Rheyna jeopardizes the mission, her life, and those of her team when she unexpectedly falls in love with Caroline, the mobsters all too beautiful and very
straight
daughter. If Rheyna thinks things cannot get much worse, she is sadly mistaken when the mole releases her identity, setting Big Tony on a path of destruction like none the bureau has ever known, a path that in the end will produce the unlikeliest hero.

All rights reserved. Except as permitted under the U.S. Copyright Act of 1976 and the United Kingdom Copyright Act of 1956 and 1988. No part of this publication may be reproduced, distributed or transmitted in any form or by any means, or stored in a database or retrieval system without the prior written permission of the publisher.

This is a work of fiction. Names, characters, places, and incidents are products of the author’s imagination or are used fictitiously and are not to be construed as real. Any resemblance to actual events, locales, organizations, or persons, living or deceased, is entirely coincidental.

A special thanks to Claire Chilton for doing such a great job on the new cover – I love it!

A special thanks to Eileen Gormley – You are the queen of creating book blurbs and I appreciate your help immensely!

Special Edition with a

sneak peak of – She Left Me Breathless

Using the cover of darkness, several figures dressed in black moved stealthily around the perimeter of the building. At first glance and to the outside world, the warehouse nestled between groups of smaller buildings conveyed the outward appearance of years of neglect and abandonment. Located just a short distance from Pier 38 along San Francisco Bay, the Danco Steel warehouse provided the perfect location for the covert activities going on inside the building.

Special Agent Carl Stevens took his position next to the entrance door. He inhaled deeply and waited for the last members of his team to take their places atop the four-story roof. He was tired of this. After thirty years of service with the FBI, he should have been the one sitting in a posh cozy office in Washington. He should have been the one directing the raids, not running them. Since the implementation of affirmative action, he had seen agents of color and sexual orientation promoted over him. His time of service and dedication meant nothing to the suits in Washington. Instead, here he was again, running another piss-ant raid. He tried to look on the bright side.

Reputed Mob Boss Capo Anthony
Big Tony
Castrucci owned the warehouse, and his foot soldier, Johnny Scala, had been the one to provide the tip leading to tonight’s raid.

Johnny, a longtime FBI informant, had relayed a message to his handler that Castrucci was expecting an important shipment tonight. Johnny didn’t know what was coming, but he knew it was big, and depending on what they found, it might just be enough to get Stevens his promotion. As far as he was concerned, it would be a promotion long overdue.

Inside the warehouse, a flurry of activity was taking place as several heavily armed men unloaded wooden crates of Florida oranges from the back of a tractor-trailer. Nearby, two forklift drivers took turns stacking the crates along the wall closest to Eugene Vega and Johnny. Each man, with a crowbar in hand began prying off the lids. Johnny pushed the straw packing material over to the side, revealing a stack of new military-issued AK 47 rifles.

Eugene carefully removed a military concussion grenade and turned it over in his hand. He held it up for Johnny to see. “Isn’t this the prettiest little baby you ever saw?” he asked.

“Yeah and be careful with it. If that pretty little baby goes off in here, you’ll blow us to smithereens.”

Eugene chuckled and tossed the grenade back into the crate. He turned toward a group of workers standing near the tractor-trailer. “Get the rest of these crates opened and repacked. We’re already behind the deadline, and they go out on the boat tonight no matter what!” he yelled loud enough for everyone in the warehouse to hear.

Outside the building, Stevens raised his hand to the tiny microphone attached to his headgear. He nodded at the agent standing opposite him as he spoke into the microphone. “On my mark: one, two, three, mark!” On his command, the agents on the ground and roof simultaneously launched their bodies through the windows and doors, sending wood and glass flying.

“FBI, Freeze!” Stevens yelled from a crouched position just inside the door.

In a flash, the warehouse erupted in an earsplitting hailstorm of gunfire. Stevens dove for cover behind a stack of skids. He glanced to his left and saw the agent closest to him stagger, drop to his knees, and fall forward onto the concrete floor.

Stevens flattened himself against the floor and crawled over to the agent. He reached out and grabbed the agent by the wrists. In a half-crouched position, he gave one big tug, and pulled the agent safely behind a stack of oil drums.

He peered around the drum before hurrying back to his original position. He leaned back against the crates and took a deep breath. Using his sleeve, he angrily wiped off the sweat running down his face. He peered around the crate and fired off several rounds, striking two workers.

A glance at the agent told him that it was not good. He forced his mind to focus and made his way to the far side of the skids so he could look out into the warehouse. Through the haze of smoke, he saw Eugene reach into a crate and pull out a grenade. Without hesitation, he pulled the trigger—striking Eugene just below the ear.

Eugene stumbled; his body fell forward, covering the crate. He raised his head, turning slightly to look at Stevens. He smiled and pulled the pin.

“Ah, shit!” Stevens yelled as the pin hit the floor. Instinctively, he turned and lunged forward, covering the wounded agent’s body with his own.

He glanced up just as the grenade tore through Eugene’s body like paper, instantly igniting the contents of the crate and those next to it in rapid succession.

“Retreat, retreat,” Stevens yelled into the microphone, though doubtful anyone could hear him through the roaring sound. He slid his arms under the agent’s shoulders and pulled him through the open door just as the side interior wall exploded.

Stevens looked around the parking lot, now littered with chunks of wood and glass. He dropped his head as another explosion blew out the back wall near the dock doors. Through the drone, he could hear the pinging sounds of ammunition igniting inside the building. He wrapped his fingers around the outer edges of the agent’s Kevlar vest and tugged with all his might. His leg muscles strained with each step as he drug the dead weight across the parking lot. Just to his right and less than two feet away, a piece of leg, torn off at the knee with its shoe intact, landed on the ground with a thud. He turned his head to keep from hurling on the spot.

He glanced back at the building, now engulfed in flames. Large billows of smoke poured into the sky, effectively casting an eerie glow over the parking lot and he knew there would be very little to salvage from the building.
It’s a total loss
, he thought as he continued dragging the agent to safety. All around him, the scene was utter chaos. Charred bodies littered the ground and those who were lucky enough to survive the explosions scrambled to get out of the way of falling debris. He involuntarily gagged when he spotted the owner of the missing leg.

Off in the distance, the sound of thumping grew increasingly loud. Stevens looked up to see a helicopter come into view. It circled above the parking lot, its spotlight making large sweeps over the pavement. The pilot swung around and hovered above a group of workers standing with their arms behind their backs, their wrists in handcuffs.

Stevens cradled the agent’s head in his lap and looked at the nametag affixed to the front of his vest. “Ah, Jesus; Rollins, hang in there buddy. You hear me? Where’s a medic? Damn it, get a medic over here now!” he yelled, half sobbing. He removed Rollins’ headgear and knew instantly that he was gone by the fixed position of his eyes. He used his thumb and forefinger to pull down the agent’s eyelids.

Stevens got to his feet, jerked his headgear off, and slammed it to the ground. He looked around the parking lot. He shook his head in disgust. It never ceased to amaze him how quickly reporters arrived on scene. Half the time, they were there before the ambulance. He watched them set up their equipment as fast as they could. He knew each one wanted to be the first with the latest breaking story and it made him sick.

His attention turned to a young woman talking with a uniformed officer. She was dressed in a skirt that was too short for his taste. They turned and looked at Stevens and then she, along with her camera operator, started across the parking lot toward him.

“Agent Stevens, can you confirm that an anonymous tip led to the raid on this warehouse tonight?” she asked, cramming the microphone in his face.

Undeterred by his brusqueness, she asked, “Is it also true that this building is tied to Mob Boss Anthony Castrucci?”

“I said no comment,” he snarled and brushed her aside with his arm. He walked over to two uniformed officers chatting next to one of the news vans and stopped in front of them. “Do you two think you can get these God damn reporters back behind the lines?” He clenched his fists so tight that his nails were digging into his palms.