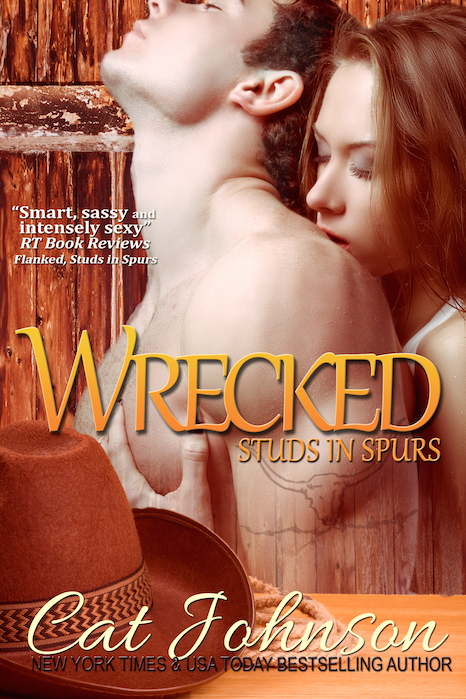 Professional cowboy and alpha to the tenth power, Wade Long is intent on showing billionaire CeCe Cole who's boss in and out of the bedroom.

It's all good until he realizes he wants her for the long haul, not just the short go. But how can a working class Texan traveling the pro bull riding circuit and a spoiled rich California CEO make it work?

Don’t miss the rest of the
Studs in Spurs
series in eBook and paperback and sign up for new release and sale alerts at
catjohnson.net/news
.

CeCe Cole watched the thin stream of milk swirl into the black coffee in the mug. It vanished into the brew, leaving the beverage a weaker shade of black. She let out a huff.

“Maggie!” Her annoyance with her assistant, the situation, and her life in general came across clearly in her tone.

There was nothing worse than bad coffee. Too weak. Too strong. It didn’t matter which, because either could ruin a perfectly good morning.

This morning, the steaming liquid in the cup wasn’t the problem. Her brand new assistant’s inability to follow simple instructions was.

This girl, whose only job was to keep CeCe happy, couldn’t even manage to do that.

She’d asked for cream, not milk. Was that too much to ask? It wasn’t exactly brain surgery.

Her assistant’s incompetence was baffling and extremely trying.

At fifty-one, CeCe Cole had completely reinvented herself. She’d taken an active role in the running of Cole Shock Absorbers.

In her lifetime, she’d gone from being a fashion model from her teens through her twenties, to a trophy wife for the following two decades, to the owner of one of the largest most recognizable corporations in the automotive industry.

That last major move had been accomplished during what could be considered by some people middle age.

Middle aged.
God, how she hated that term.

Finally, the newly hired girl appeared in the doorway of the office. “Yes, Mrs. Cole.”

“Maggie, it’s
Ms.
Cole. I’m no longer married.” It wouldn’t even be that if the Cole name didn’t come with so much power and recognition in the industry. Even so, a return to her maiden name was very tempting. “And I said half and half for my coffee. This is obviously milk. I can tell just by looking at it.”

Coffee with cream and real sugar was CeCe’s one indulgence in a life that was filled with low calorie, high fiber, healthy foods and relentless exercise.

“I didn’t call you in here for you to apologize. Get me half and half.” CeCe held out the pitcher filled with the offending milk toward Maggie, hoping the dissatisfaction showed in her expression.

If it hadn’t been the housekeeper’s day off, CeCe would have already had her first cup of coffee of the day before she left the house and might be a little more understanding now.

Unfortunately for all of them, Maria was off on Mondays. Moving on with her morning, sans coffee for the moment, CeCe ignored the girl and focused her attention on the computer screen in front of her.

“Same old CeCe.” A too familiar male voice brought her attention back to the doorway. “Why don’t you just cut the girl a break?”

Her jaw clenched, as it always did in the unwelcome presence of her ex-husband, John Cole.

CeCe lifted one brow. “Why? Did you fuck her too?”

It was a valid question. John’s liaisons during their marriage had been many and varied.

John swiveled his head to watch the girl’s path across the office as she walked toward the kitchenette. He brought his gaze back to CeCe. “Nope. She wasn’t here when I was.”

An unladylike snort CeCe couldn’t control was her first response to her ex-husband’s unspoken text. That being if this girl had worked for him while he’d still been in power of the company, he would definitely have fucked her. Or at least tried.

“May I remind you that what I am or am not is no longer your concern? A pleasure I paid dearly for.”

“You’re correct about that. You are definitely not my concern, so why are you here?”

“I need your signature.” John tossed a paper onto her desk.

She didn’t give him the satisfaction of looking at it. “This paperwork should have gone through the lawyers.”

He sniffed at her suggestion. “Those lawyers of yours have cost me more than enough money already. It’s just the title to the boat, which if you remember, you gave me in the divorce in exchange for the ski house that is worth far more.”

Finally, she glanced down at the paper on the desk in front of her. It did look like the title for the boat, but the fact remained the divorce had been messy.

Hell, the marriage had been messy near the end too. She wouldn’t put it past her ex to try to salvage some of what he’d lost by tricking her into signing over something that was legally hers. “I’m not signing a thing without council.”

“Why not?” He drew his bushy eyebrows low. Had she still been married to him, she’d have had her hairdresser trim those things.

Nowadays, she was more than happy to see John looking like an unkempt vagabond. She hoped his ear hair was growing in extra thick as well.

Her glare met his head on. “Because, John, I don’t trust you as far as I can throw you.”

“Come on, CeCe. Just sign the damn paper. I’m not trying to fuck you.”

That elicited a laugh from her. “No, you stopped being interested in that the last year of our marriage.”

She guessed a man of his age couldn’t rise to the occasion as often as when he’d been younger. All of the younger girlfriends he kept on the side must have worn him out before he’d gotten home.

He shook his head. “It boggles the mind that even now you’re still not happy. You took me for millions. You made me pay for every indiscretion. You have more money and houses and cars than any one person could use in a lifetime. Yet, even after everything, you’re still as miserable a person as you always were.”

CeCe narrowed her eyes. “Whatever I am, you made me.”

He paused before drawing in a breath. “I’ll have my lawyer contact yours about that title.”

“You do that.” Her retort was far less satisfying than it could have been since he was already out the door and walking away as she had called it after him. CeCe grit her teeth and mumbled, “Stupid, mother fuck—”

CeCe halted mid-tirade as she saw another figure darken her doorway—a man she’d never met before to her recollection.

There had been far too many visitors in her office this morning. Especially considering she had yet to drink her first cup of coffee.

Where the hell was Maggie with that half and half?

One glance at the card told CeCe exactly who he was. The knowledge brought a scowl to her face. She tossed the card back down onto the desk. “From the bull riding association. I’m sorry, but I can’t help you. I’m no longer affiliated with that organization.”

“Yes and no. The sponsorship was paid in advance for the entire season, so technically Cole Shock Absorbers is still the association sponsor until the first of next year.

“Well, if you’ve run out of money, you can go look elsewhere—”

“Then what is it about, Mr.—” CeCe referred to the card again as his name eluded her. “Matheson?”

Maggie finally appeared with the pitcher that hopefully contained the half and half CeCe had requested, but having two distasteful visitors had already ruined her anticipation of her morning cup of coffee.

“We were hoping you’d consider attending this weekend’s event.”

“Why in the world would I do that?” CeCe leveled her gaze at the man.

She should have realized he’d be bad news from the moment he’d walked in wearing cowboy boots. The last time there’d been a pair of cowboy boots under her bed it had ended badly, to say the least.

If she never attended another bull ride again it would be too soon.

Nope. Not going to happen.

Not after spending the weekend in bed with bull rider Aaron Jordan before he’d dumped her for one of her own employees.

The dead last thing CeCe wanted was to run into Aaron at an event. Or run into her former marketing manager, for that matter. Judging by the way they hadn’t been able to keep their eyes off each other, chances were good the two were dating.

Even the mention of the bull riding association brought back memories that gave CeCe a stomachache. Her humiliation thanks to one certain young bull rider was still too fresh.

Nearly a month later, she continued to have a visceral reaction to the topic. It had her pushing her coffee cup away.

“The event is the Cole Shock Absorbers Invitational. It’s a tradition for the company’s owner to present the buckle to the event winner.”

“I guess it’s time for a new tradition.” She forced a smile she didn’t feel.

If there was one thing CeCe Cole was good at it was smiling even when her heart wasn’t in it. Especially then. Years of modeling and being in an unhappy marriage had trained her well.

Tony pressed his lips tightly together. “All right. If that’s truly your feelings, then I’ll take Mr. Cole up on his offer.”

The man tipped his head in a nod. “He contacted us to see if we wanted him to make the presentation since he did it last year. And he’ll be doing it next year at what I suppose will be renamed the Cole Auto Parts Invitational once his company takes over the sponsorship.”

Some of the toughest decisions in life came down to the choice between two evils. CeCe faced that challenge now as she decided which was worse—going and facing the young lover who’d spurned her, or staying away and letting her ex-husband win this round, all while knowing nothing would make the rotten bastard happier.