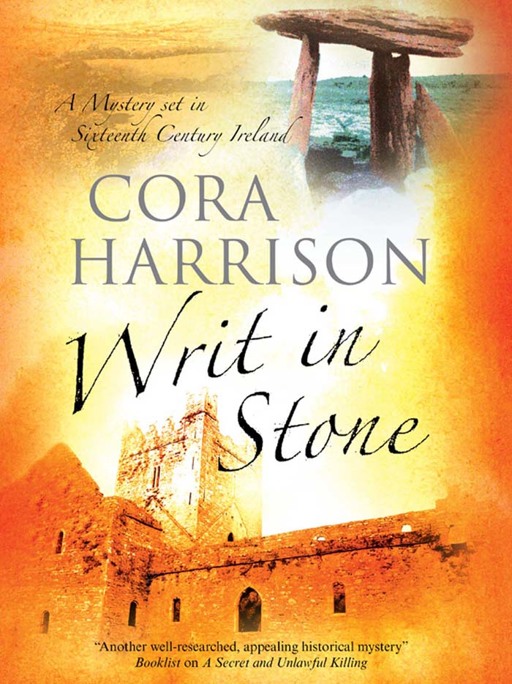 Recent Historical Mystery Titles by Cora Harrison
MY LADY JUDGE
A SECRET AND UNLAWFUL KILLING
WRIT IN STONE
Cora Harrison
This eBook is copyright material and must not be copied, reproduced, transferred, distributed, leased, licensed or publicly performed or used in any way except as specifically permitted in writing by the publishers, as allowed under the terms and conditions under which it was purchased or as strictly permitted by applicable copyright law. Any unauthorised distribution or use of this text may be a direct infringement of the author's and publisher's rights and those responsible may be liable in law accordingly.
First world edition published 2009
in Great Britain and in the USA by
SEVERN HOUSE PUBLISHERS LTD of
9–15 High Street, Sutton, Surrey, England, SM1 1DF.
Copyright © 2009 by Cora Harrison.
All rights reserved.
The moral right of the author has been asserted.
British Library Cataloguing in Publication Data
Harrison, Cora.
Writ in Stone.
1. Mara, Brehon of the Burren (Fictitious character) –
Fiction. 2. Women judges – Ireland – Burren – Fiction.
3. Burren (Ireland) – History – 16th century – Fiction.
4. Detective and mystery stories.
I. Title
823.9’14-dc22
ISBN-13: 978-1-7801-0091-3   (ePub)
ISBN-13: 978-0-7278-6812-1   (cased)
ISBN-13: 978-1-84751-176-8   (trade paper)
Except where actual historical events and characters are being described for the storyline of this novel, all situations in this publication are fictitious and any resemblance to living persons is purely coincidental.
This ebook produced by
Palimpsest Book Production Limited,
Falkirk, Stirlingshire, Scotland.
Contents