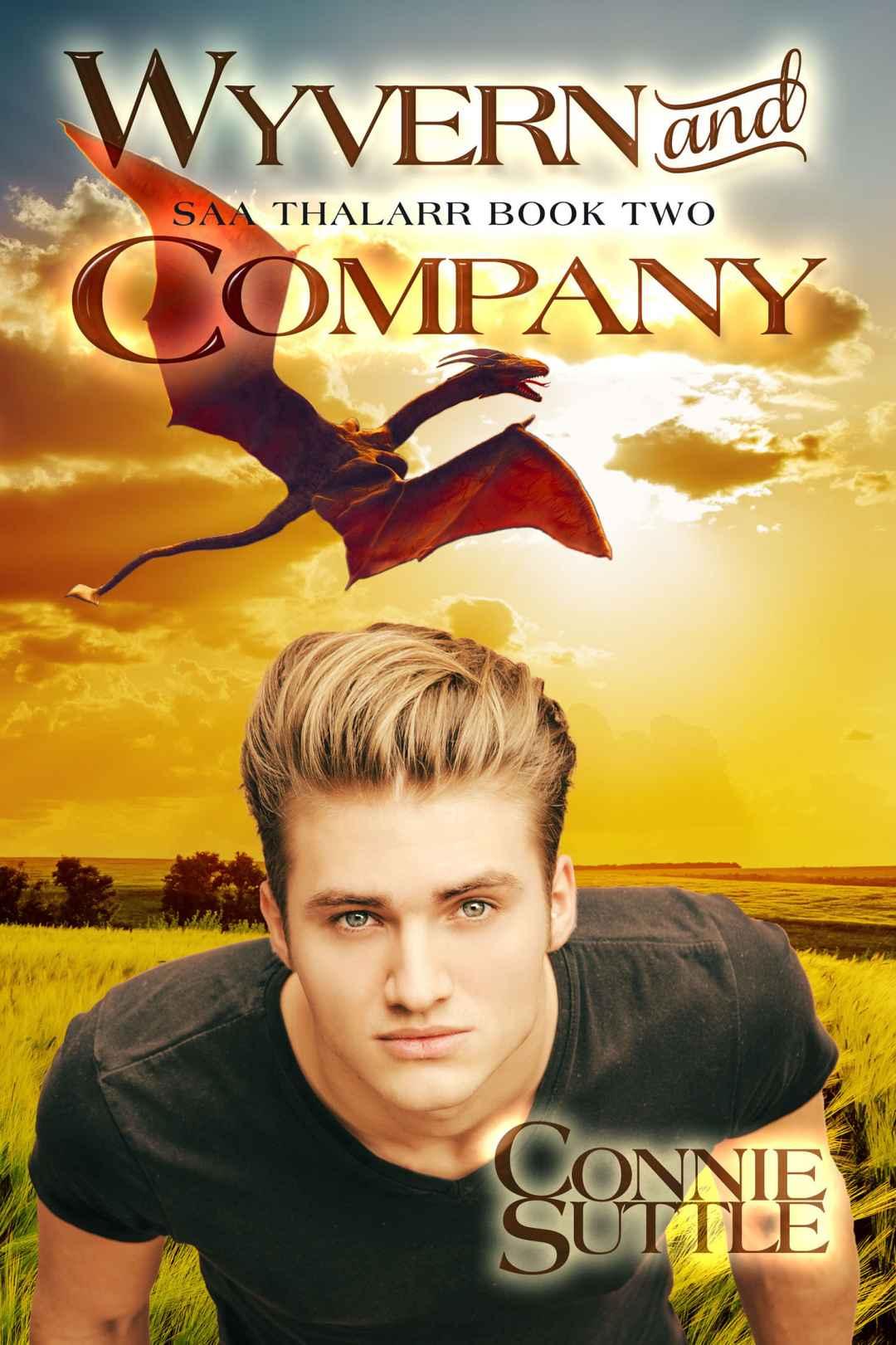 A very special thank you to Fluffer Nutter, Renée B., Richard K. and Amy S.

The Author's information may be found at the end of this
book.

This book is a work of fiction. Names, characters and
incidents portrayed within its pages are a product of the author's imagination.
Any resemblance to actual persons (or vampires, werewolves, High Demons,
Greater Demons, Lesser Demons, Larentii, shapeshifters, Ra'Ak, wizards,
warlocks, witches, Avii, Saa Thalarr or gods) living or dead, is purely
coincidental.

This book, whole or in part, MAY NOT be copied or reproduced
by mechanical means (including photocopying or the implementation of any type
of storage or retrieval system), without the express written permission of the
author, except where permitted by law.

The author wishes to thank you for purchasing this e-book.
Purchasing this book through legitimate channels supports the author and makes
it possible for her to keep writing. If you did not purchase this book through
legitimate channels, or have downloaded it from a website that pirates authors'
works, the author kindly asks that you purchase a copy for yourself, as sales
of her books are her only source of income.

Legend of the Ir'Indicti Series

Marilee Short walked up behind me as I pulled my English
homework from my locker. It was Friday after our first week of school and
Marilee was on the prowl. Her fake, sultry voice might work on the rest of the
football team, but I wanted nothing to do with her.

I can't explain that—Mack almost pants around her if she
speaks to him at all. And Short? What an oxymoron of a name. Marilee is
five-eleven in her socks.

"Marilee." I acknowledged her presence by saying her
name and slamming my locker door. She began to walk her fingers up my arm the
minute I turned to look at her.

"Whatcha doin' tonight, Justin?" she asked, turning
the pseudo-sultry up a notch.

"Helping my dad," I said, "At a construction
site." I stared at the fingers walking up my arm. She dropped her hand and
her eyes.

"We-ell, if you get done early," she looked at me
again, "A bunch of us are getting together at my parents' lake cabin to
get drunk. You're more than welcome to come."

"I'll think about it," I lied. I hate to lie, but
sometimes there's just no other way. Marilee waited for me to say something
else. When I didn't, she took the hint and walked away.

"See you there," she called behind her.

"Not in this lifetime," I muttered before turning to
walk out a different way.

The hallway was deserted and dim that afternoon—most kids
couldn't wait to get away from school on Fridays. I heard sounds of car engines
starting outside; seniors were allowed to drive themselves and they were
squealing out of the school parking lot, just to make the others envious.

I had to walk all the way around the building to get to my
car, but by the time I got to it, Marilee and her crowd were already gone.
Climbing into my six-year-old Honda, I shut the door and got the engine going.

The weather was as hot as you can imagine Fresno might get in
late August, and I hoped the AC would get the car cooled fast. While I waited
for that to happen, I pulled my cell phone from beneath the seat to check for
messages. There was only one—from my best friend, Mack.

Mack's real name is Martin Walters, Jr., but his family calls
him Mack because his dad goes by Martin. Mack is better than being called
Junior any day of the week. Punching a button, I called him back.

JAG is code for my initials, Justin Adam Griffin. Mack is the
only one who calls me that. Actually, he's the only one who'll get away with
calling me that. If anybody else did, I'd be pissed. It's just like calling my
dad sweetie. Mom can get away with it, but if anybody else said that to him,
they'd be acquainted with a wall in short order.

"Marilee just called. I got invited to her parents' lake
cabin tonight." Yeah, he was excited. Mack was smitten with Marilee
Short—the top of his head came up to her chin, but that didn't stop him for
even a second.

I also recognized Marilee's game—if she convinced Mack to go,
then maybe he'd convince me to come, too. "You goin'?" I asked.

"Have a good time. I'm helping Dad at his new
construction site tonight."

"Groovy. Uh, sorry you can't go," he covered his
mistake.

I laughed. "No prob, dude. Have a good time. Don't get
too drunk. You have to drive home, you know." Mack knew Marilee had her
eye on me, and couldn't understand why I kept shoving her away. If I didn't go
tonight, maybe he'd have a shot.

"Later, dude," I responded and ended the call. At
least our conversation allowed time for the Honda's AC to work. I drove home
only semi-moist from the heat.

"Mom, what the hell?" I said, dumping my cell and my
backpack on the kitchen island. She stood in the middle of the island, her feet
bare, stretching to reach the light fixture hanging overhead.

Dad, who'd walked into the house a nanosecond after I did, now
stood beside the island, watching Mom's attempt to change a light bulb while he
scowled at her. When he folded his arms over his chest, that was a signal—that
somebody was doing something that didn't meet with his approval.

"Adam, it's a good thing you didn't build this house,"
Mom grumped as she stretched on tiptoe to reach the burned-out bulb.

"And if I had built it?" As always, he sounded calm.
I recognized the tone, however—it said
I'm not taking much more of this
nonsense
. If I'd been on that island, I'd have gotten down.
Fast
.

"If you'd built this, I'd smack you for putting this
light fixture where you can't reach it with a ladder," she said.

Yeah, it was time to defuse. "Hi, Mom," I said,
walking to the opposite side of the island and lifting my cheek for the
traditional kiss. Mom smiled and leaned down to do just that.

I pulled her off the island the minute she leaned down,
setting her on the floor while Dad hopped onto the island like it was three
inches instead of nearly three feet off the floor. He had a new bulb in the
fixture before Mom could draw breath to yell at both of us.

"Effing fine," Mom snapped when Dad jumped off the
island with a grin. Except she didn't say effing. She said the actual word.
Then she added something about tag team crap, only the S word was used instead
of the C word.

Dad and I waited for her to leave the kitchen before we
started laughing.

"You still planning to clean up the site tonight?"
he asked.

"It shouldn't take long. Joey wants to go to a late movie
afterward, if you're interested."

"Just didn't want to put a crimp in your social life,"
he teased.

Dad has a faint accent when he speaks—either British or
Australian—I can't really tell. His birth certificate says he was born in
London, but he says he moved around a lot before he met Mom and settled in
Fresno.

Miss Channing, my eleventh-grade History teacher, sighs and
bats her eyelashes at Dad whenever she sees him at one of my basketball or
football games. Dad pretends he doesn't see her.

Mr. Jameson, the assistant principal, was the one I worried
about, though. I overheard him saying he wouldn't mind effing my mom, only he
said the actual word, too. I didn't tell Mom about it—I told Dad. I mean, that's
just creepy.

Dad had a look on his face that I'd never seen before when I
told him, just before he went to have a talk with Mr. Jameson. I don't know
what Dad said, but whenever Mr. Jameson saw Mom after that, he ran in the
opposite direction.

"I think I can get the site cleaned up before dinner,"
I said when Mom walked back in the kitchen.

"You have three hours," she said.

"I can handle it." Pulling my shirt over my head on
the way to my bedroom, I grabbed work clothes, dressed and was out the door in
ten.

"How bad was the worksite?" Uncle Joey asked as we
stood in line to get popcorn at the theater.

"Found a bunch of roofing nails in the flower bed. Good
thing I had the nail magnet with me—Dad told me to take it before I left the
house. I'd still be there if I hadn't."

"How did it look?" Joey stepped up to the counter to
order popcorn and drinks for both of us.

"Good. Dad's crew did a great job and the interior is
finished—they're only waiting for carpet, now. The tile is already down."

"School's school," I shrugged as we watched the
clerk fill two tubs of popcorn. "May need your help with calculus. Mr.
Draper is just as boring as everybody says he is. I hope I don't fall asleep
during class."

"I'll help," Joey agreed and handed money to the
clerk.

"I got invited to a beer party tonight. Didn't want to
go," I added as we walked down a hall toward our theater. "Mack went.
He really doesn't like beer—he wanted to go so he could drool on Marilee Short."

"She really bothers you, doesn't she?" Joey opened
the door and let me walk through first. Commercials were already playing on the
screen, but the previews hadn't started yet.

"I don't know why. She's pretty and popular. She isn't
stupid, but she lets everybody think she is. I guess she just doesn't try,"
I floundered.

"That bothers you too, doesn't it?" Joey nodded as
we walked up carpeted steps toward a high seat.

"Yeah. The other guys tend to eat that up, but to me, it's
just dumb. Why hide what you are?"

Joey chose that moment to choke on a mouthful of popcorn. He
coughed for a minute or two before going up the steps again.

We'd gone to an action/adventure movie. It was strong on
action and special effects, but rather deficient in story. Joey and I
complained about it on the drive home.

Saturday is my laundry day. Since I was twelve, I've been
washing my own clothes and bedding. Mom said it was good practice for later,
when I went to college or looked for a girlfriend. Who wants to be invited to a
dirty apartment or dorm room?

Actually, I was looking forward to a little mess, but not so
much it couldn't be cleaned in half an hour. At least I knew how to clean and
do laundry—Mom made sure of that. That's why I was carrying an armload of
sheets and pillowcases toward the laundry room when I heard the television going
in the media room.

Normally, Mom and Dad seldom watched television—especially so
early on Saturday morning. At first I ignored it, choosing to stuff the sheets
in the washer, add soap and get it started before walking into the kitchen for
a glass of orange juice.

That's when I walked into the family room, carrying my juice
and looking to find out why the TV was on. That moment set me on a track I'd
never known existed. I froze, my glass halfway to my mouth, as the huge,
flat-screen television came into view.

Splashed across it was Mack's photograph from last year's
yearbook—the one he hated so much. A reporter blathered some nonsense while I
read the caption at the bottom of the screen—the one that said
arrest made
in party massacre at Shaver Lake cabin
.

The glass of orange juice fell from my fingers and shattered
on the wood floor.